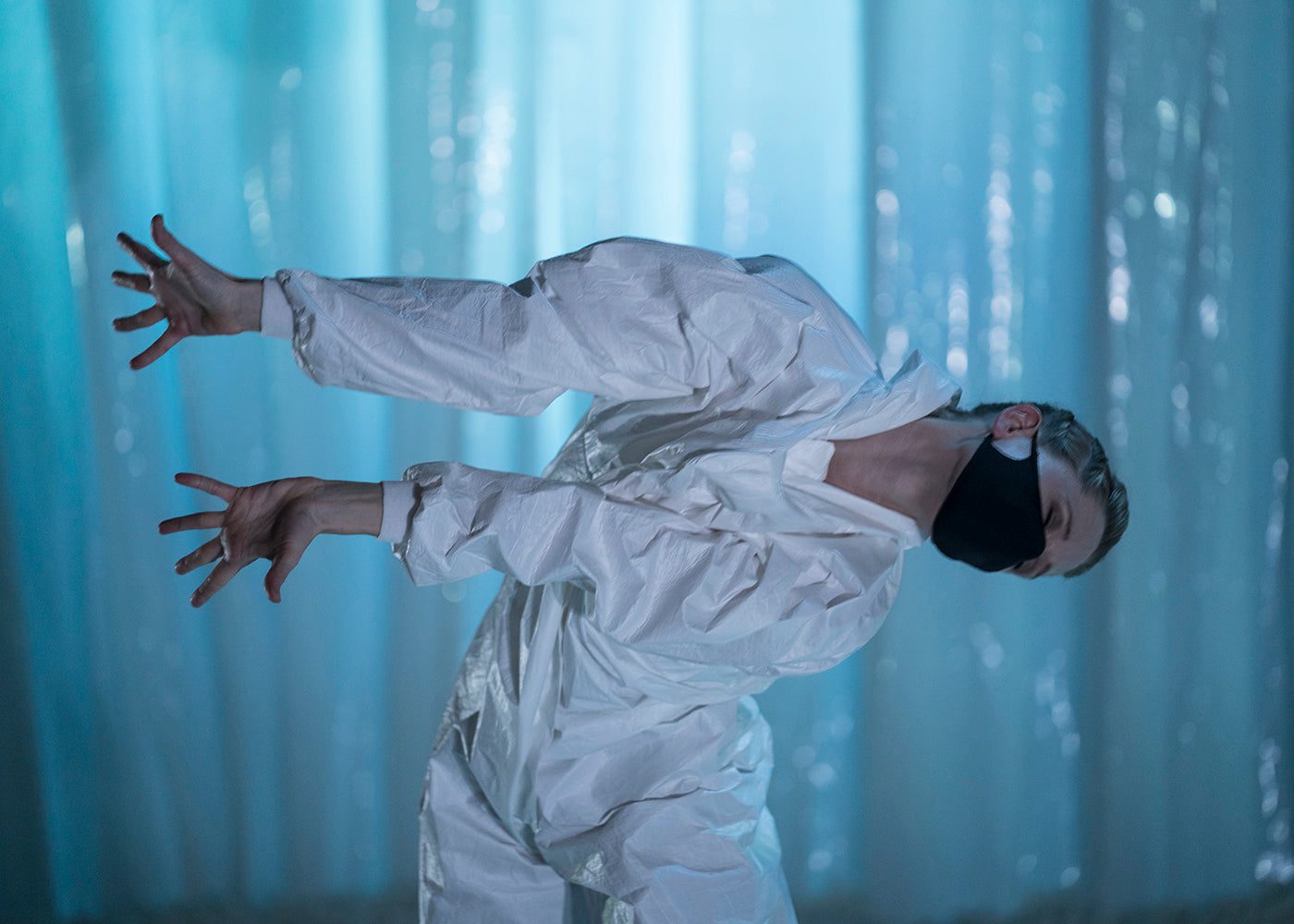 A Rite of Spring for our Time

Andrea Schermoly’s Rite of Spring, a dance film created for Louisville Ballet and currently streaming until May 31st, opened to the sound of the wind blowing and an ominous sci-fi text reading: “Post apocalypse, a seeded band of humans struggle to survive on a frozen planet. Battling a viral plague, they await a sign of hope.”

A dancer entered into the lens, walking through falling snow and drifts of plastic sheeting, with a green neon tube light in his hands. Masked and wearing a shiny white hazmat suit, his eyes were both searching and shell shocked. Dropping to his knees, he gently laid the tube on the ground, covered in snowy, white packing peanuts, as if this was a sacred relic from past civilization. After the title sequence, the familiar and alluring bassoon melody of composer Igor Stravinsky’s much revered, though initially reviled, The Rite of Spring (also known as Le Sacre du printemps) cued a woman to sway in the arctic landscape. Interrupting the tranquility almost immediately with a sharp pose, and wiggling her torso to hunch over her legs, she shuffled her feet fast. The packing peanuts were tossed up and swished around in her wake. A few more dancers entered in the same sneaking fashion.

A unison phrase of grounded movement continued with more dancers folding in, swirling the little white pieces of foam around and up into the air as they lunged and chasséd and swiveled. The film’s world felt complete and immersive; the whimsical and futuristic elements of Joel Schermoly’s set design and Jesse Alford’s lighting adding frosty layers of texture and play as the dancers wove in and out of the landscape in the first section of the film, powering their own warmth with percussive arabesques and chugs, and a port de bras motif that frequently returned to a self-hugging gesture.

The snow over the marley floor seemed like a nod to Pina Bausch’s 1975 version in which the stage was covered in dirt. In a way, Schermoly continued this sort of yin yang conversation with that work; whereas the friction and body slamming of Bausch’s choreography evokes the brutality of a mob in the pagan myths written into this ballet, Schermoly’s version plays with duality, choosing to portray the haunting isolation and relentless internal anxiety of desperate, or apocalyptic, social decisions. Schermoly does this subliminally—at least after first planting the seed through the opening text—and even through the remove of the screen, an undercurrent of fear was felt viscerally through shifting camera angles, moving frequently from birds eye view to close-up shots, sometimes following a movement phrase diligently and other times, panning away from the dancers as if in flight. Just as jarring was the lack of touch between the dancers. (Schermoly created her Rite in the midst of the pandemic when strict protocols and testing were required and touching, let alone partnering, was still off limits.)

Writing in The New Yorker in 1984 in a review entitled “Bad Smells,” Arlene Croce derided choreographers of contemporary versions of Le Sacre du printemps for relying too heavily on the music to propel the steps. While I don’t necessarily agree with all of Croce’s views—in particular her complete pan of Bausch—I am certain the same could not be said of Schermoly’s propulsive movement: just as dancers began wide-stance stomps in unison to the driving beat, full bodied thrusts and sautes sent them flying off like projectiles in different and surprising directions, helping the viewer to both see and hear Stravinsky’s dissonant score anew. In tandem, the dancers valiantly maintained the drive and momentum of the relentless rhythms and Schermoly’s full-bodied movement vocabulary. This is no small feat given the historical significance of this ballet, which has spawned at least 150 productions since its premiere in Paris in 1913, with choreography by Vaslav Nijinsky for Sergei Diaghilev’s Ballets Russes.

With the ominous dirge music sounding, the scenery abruptly shifted to an institutional setting. Dancers filed in and out of a clinical hallway and the choreography slowed down to focus on an exaggerated and gestural phrase as something awful spread, morphed, mutated. Cutting back to the winter landscape, dancers fell ill and rolled off screen. Quick camera cuts captured their last layers of defense giving way as the plastic sheets fell, the dancers peeled off their protective suits, and the green tube light flickered out.

Ultimately, Schermoly saved the best surprises for the second half. When a woman finds blood on one of the recently shed suits, it is only a red herring. She is not to be the young woman singled out for sacrifice or murder; instead, she hunts the Chosen One, who left this damning evidence behind. Once found, he is subjected to a frenzy of rituals as the other dancers donned black nylons over their faces, symbolizing his inherent execution or doom. In the end, he was simply left behind, presumably abandoned with the plaguing virus that caused his bloodshed, as this small force of humanity moved on.

Not playing to the melodramatic gender stereotypes of virginal sacrifice allowed me to feel empathy for both the Chosen One, as he is left standing alone, and the others, as they run away bearing the weight of their decision. Like Glen Tetley’s 1974 version, Schermoly’s Rite chose to single out a male dancer—the dynamic and captivating Ryo Suzuki—but as she stated recently in Pointe magazine, “ I really wanted to capture the randomness of it all; the Chosen One could have been anybody.” Perhaps this intentional gender flip is about more than just a 180-degree shift and speaks to a future where a ballet such as this, when it is eventually performed on the stage as intended, will allow for gender fluid casting. If so, this chilling Rite may continue to stand out and have a long and fruitful tenure among such a cluttered canon, perhaps even outlasting our collective trauma from Covid-19.

Next
A Critical Failure