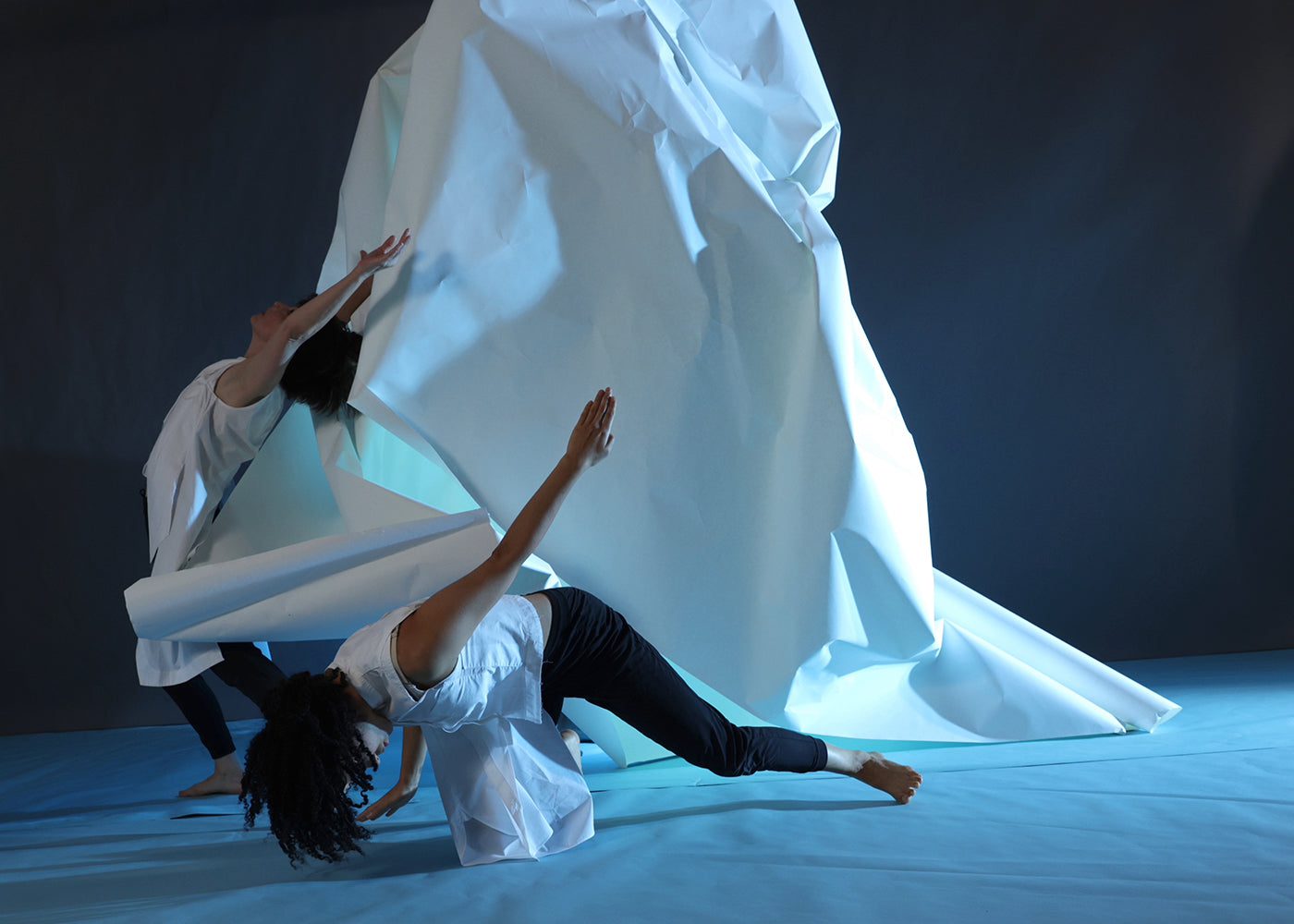 Interglacial Captures an Interval of Uncertainty with Real-Time Sculpture

Upon entering the small blackbox theater of Dixon Place on Thursday, December 9, 2021, the all-white papered stage of Laura Peterson Choreography’s “Interglacial” was pristinely set with four large crumpled up balls of paper and a thin line of light, nodding to minimalist artist Dan Flavin and bisecting the upstage wall. I am both old enough to remember when Dixon Place performances were in an actual New York City living room and familiar enough with Peterson’s work to know of her obsession with Flavin (for instance: her 2007 work “I Love Dan Flavin”). I was delighted to be among familiar cultural anchors again—shouldn’t we all just take a moment to scream with joy every time we encounter artists and presenters who have prevailed despite the last two years?!—and looking forward to finding out how the four dancers would further shape this space.

When they appeared, each knelt in front of a paper ball. On hands and knees, they slowly slid the paper across the floor, sometimes nudging with a head, other times a shoulder, like beasts of burden. Their movements were slow and smooth, setting the pace for a work that continued a slow build in intensity, offering only a few moments of release. Arriving at the opposite end of the stage, they began to roll under the paper floor, adding the creaking sounds of each large sheet being ruffled to the ambient music by Omar Zubair. Their bodies continued to disappear until just a dangling foot was visible, and only for a moment, until that too was swept under. A low thundering sound rumbled as the lights turned cooler; their bodies quiet, the pulse of their imagined breath imperceptible.

According to the program notes, “An interglacial is a period between Ice Ages. It is a geological interval of warmer than average global temperatures. The current interglacial has lasted 11,700 years. Whether there will be another Ice Age is a topic of current scientific debate.” If choreography can be considered a drawing in space and time, then Peterson set epic proportions for the task at hand, which was created in collaboration with the performers. Throughout, Amanda K. Ringger’s saturated lighting and Charles Youssef’s architectural costumes were natural complements to both the movers and their shapeshifting set.

The uneasy calm was broken with a swift move up to standing, pulling the paper into a magnificent spontaneous sculpture, as parts of the paper were sucked in by the movement and forced to fold. One after another, each ghostly apparition hammered the paper into shapes high and low, the sound of it all incredibly loud and gratifying. They began to move toward one another, finding new ways to relate, however obstructed. Unable to see the dancers’ movements but catching their reverberations through the paper, their bodies provided the ultimate subtext, a physical demonstration of Ernest Hemingway’s iceberg theory.

But the dancers did eventually emerge, and in the longer uncertain and sometimes fraught intervals, gave us time to appreciate the individual gifts of their presence. Laura Peterson and Darrin Wright took on a looping adagio phrase, all elbows and sharp angles, traversing and balancing along the littered floor. Ching-I Chang made a startled escape, breaking free to explore the perimeter. Jennifer Payán joined her and they flung themselves to the ground with propulsive force, all the while attending to the finer details of maneuvering in, out, and on top of the large swaths of paper. It was a privilege to experience the balance between Peterson and Wright’s slow simmering patience along with Payán’s playful timing and Ching-I’s freedom. Eventually, Peterson and Wright dropped into the floor work, the lights dimming down with them, all four dancers rolling and scooting.

The line of light returned across the back wall, and with it came a unison section made entirely of battements (or more accurately the repetition of four counts: step 1, kick 2, walk 3, walk 4). Their arms and heads shoved down against each upward kick, while they paced the stage in all directions, creating an anxious and caged mood. In this familiar terrain of accumulation and exhaustion—elements present in every single work of Peterson’s I have ever seen—there was something extra, perhaps a new layer: grief. As the work accelerated toward its end, I kept feeling pangs of it: when Payán gathered up long sheaf of blue paper on the floor and rolled herself into it, dragging herself and everything attached to her around; when Ching-I snatched another new piece of floor paper up, awkwardly attempting to hold the whole jumble in her arms; and when Peterson kept picking up pieces of torn paper, each one smaller than the last, attempting to reclaim and save them. Near the end, they were all consumed with putting the paper back on the floor, trying to press it down and smooth it out, filling in the gaps with shredded bits. I couldn’t tell if the gesture was hopeful or sad, an exercise in putting things back in order or a futile attempt to fix something permanently broken. But I didn’t have much time to ponder before they drew my attention upstage where they had gathered and with each step downstage, pushed the paper into a large mountain. In a matter of seconds they were gone again, sucked under the avalanche of paper that was rushing our way.

Next
A Moveable Feast: When a Jubilee is a Year Late