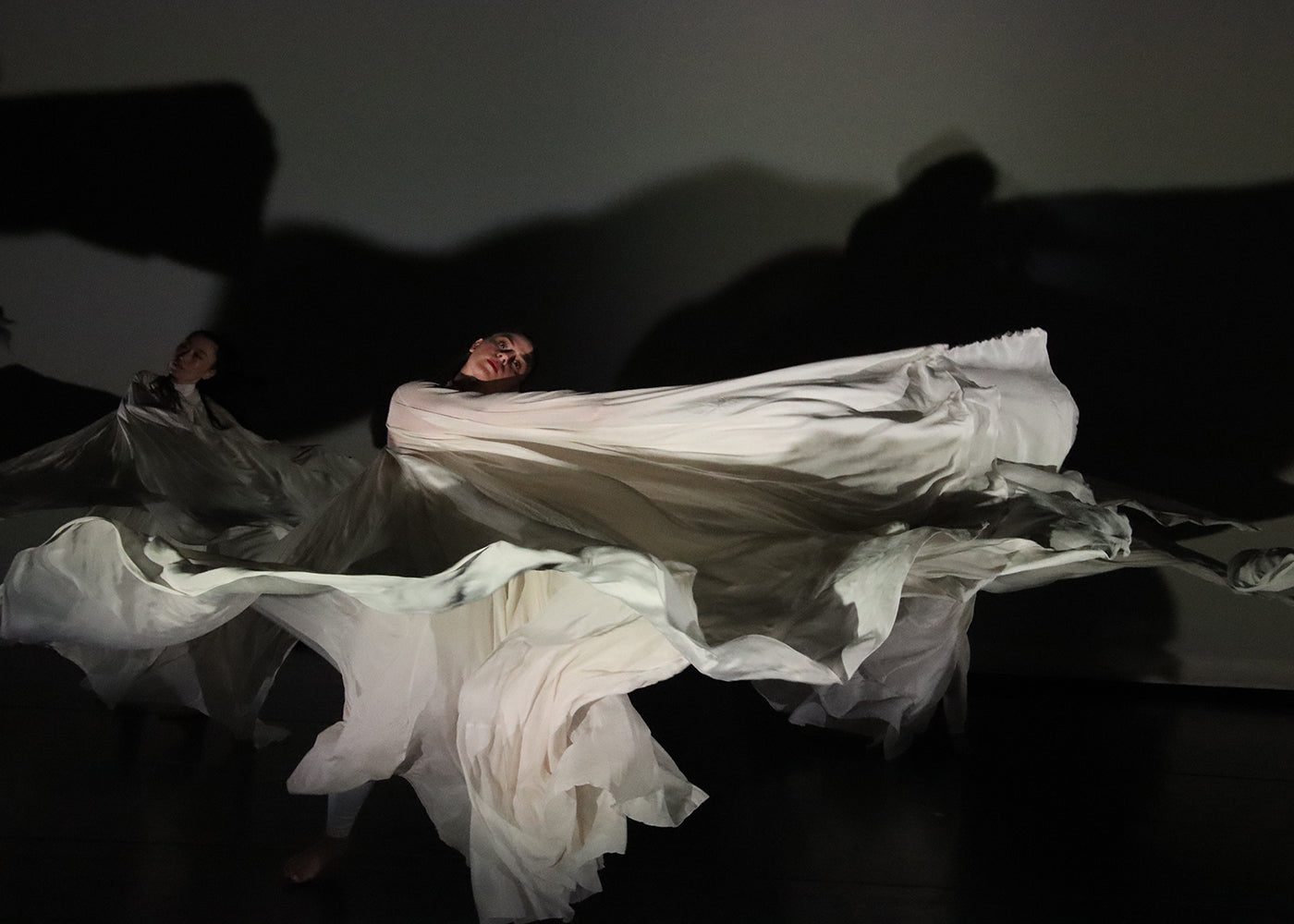 It wouldn’t hurt to have a tutorial at the ready when attending a show by Time Lapse Dance. The dynamic movement and flowing fabric that are signature elements of work by founder and choreographer Jody Sperling deliver a visually gorgeous evening of performance, but there is always a deeper level to discover for those curious about how and why the works exist. “We start with the science,” said composer Matthew Burtner about his collaborations with Sperling, during the post show Q&A on May 5 when the company showed four works in Manhattan, its first stage appearance in two years following a March 2020 cancellation due to Covid.

Inspired by dance pioneer Loie Fuller (1862-1928), who used fabric and light to create special effects, Sperling has over the years developed a signature style of draping dancers in full-length voluminous capes made of parachute silk. Under the fabric, dancers’ arms are extended by slender three-foot-long rods that give each performer a wingspan of twelve or so feet. As they twirl and bend, the dancers become kinetic flowers (or clouds) that mesmerize in the way of a whirling dervish—or, strikingly evoke a row of wind turbines, consistent with Sperling’s interest in habitat, ecology and the effects of climate change.

I first began to follow Sperling when I heard she had accepted an invitation to join a scientific research team aboard the US Coast Guard Healy, a polar icebreaker. During the six-week expedition, she took on a deep study of Arctic ice and made public journal postings about her activities, gave dance workshops to interested crew and team members, and best of all, danced with her signature cape directly on the Arctic ice in subzero temperatures. These brief samples as she called the dances were collected beautifully on video. It was during this time that she first met Burtner, an ecoacoustic composer, who grew up in Alaska. He collects field recordings of ice, snow and wind to make electronic assisted compositions. Their initial collaboration, “Ice Cycle,” has been performed many times as a way to educate audiences about the impact of changes to Arctic ice.

The May performances included a brief excerpt of “Ice Cycle” in which a pair of dancers, the excellent Carly Cerasuolo and Maki Kitahara, move in unison, one in a solid black cape, the other in white, delivering a visual effect that rivals the striking grace of Georgia O’Keefe’s giant flower portraits. The musical score is a full partner to the movement of “Ice Cycle,” creating a second duet with Burtner. Stationed in a spotlighted alcove, he managed a series of digitally enhanced sounds including tinkling of bells and the call of seagulls, alternatively delicate and piercing.

The show opened with the first of two premieres, “Plastic Harvest,” versions of which were originally performed by Sperling on the streets of Manhattan to call attention to an ecologically wasteful behavior. Five dancers enter the space to the sound of a steady drumbeat dressed in costumes by Lauren Gaston made entirely from disposable plastic shopping bags—the kind now banned in NYC. The Raggedy Ann-type figures wore plastic bag headwraps and carried a pom-pom in each hand. They went from a swishing unison line dance to become piles of discarded bags on the ground, to bird-like prancing, to a cluster that moved like seaweed under water. I can imagine this playful piece as perfect for family audiences, more successful as a spontaneous street performance than for the concert stage.

“American Elm” made its first New York appearance second on the program as a solo for Sperling, costumed in a silk cape painted with tree limbs by textile designer, Gina Nagy Burns. Sperling was a master of stage presence as she evoked the deep-rooted majesty of the tree, rising and commanding the stage in stillness. Once she began moving, I could sense the canopy of leaves as the wind worked on them, while Burtner’s electronic music produced a haunting sound sampled from sonic waves emitted by the rings of live trees.

The highlight of the evening was “Wind Rose,” first performed in 2019, and here is where your tutorial will come in handy. A wind rose is a circular graphic chart that compares data for speed and direction of wind in a particular location, say, Central Park, to study the effects over time. But in the hands of Sperling, a wind rose is also a stunning, spinning white cloud that both moves and is moved by wind.

Five dancers enter in solid white capes, this time not enhanced by rods. They hook elbows to form a diagonal line like the spoke of a wheel as it turns. Eventually the line breaks open, and the dancers move as individuals. A striking moment that repeats to great effect is when a dancer bends to gather up armfuls of her cape and slaps the fabric to the floor like wet laundry against rocks.

When the five dancers exit, Sperling enters tapping a white stick in front of her as if blind. The stick quickly becomes a sword that makes a whipping sound as she cuts with force through the air around her, mirrored by two shadow figures on the scrim behind. Meanwhile, offstage, the dancers have equipped their capes with rods and now retake the stage with sweeping and whirling velocity—not only as if moved by the wind, but also creating wind the audience can hear and feel. A chorus of breath led by Sperling and Bucker from the sound booth becomes a chant: “hah shee hah shee hoooo; hah shee hah shee shhhhh.” The wind builds, then ebbs, then blows out the lights.