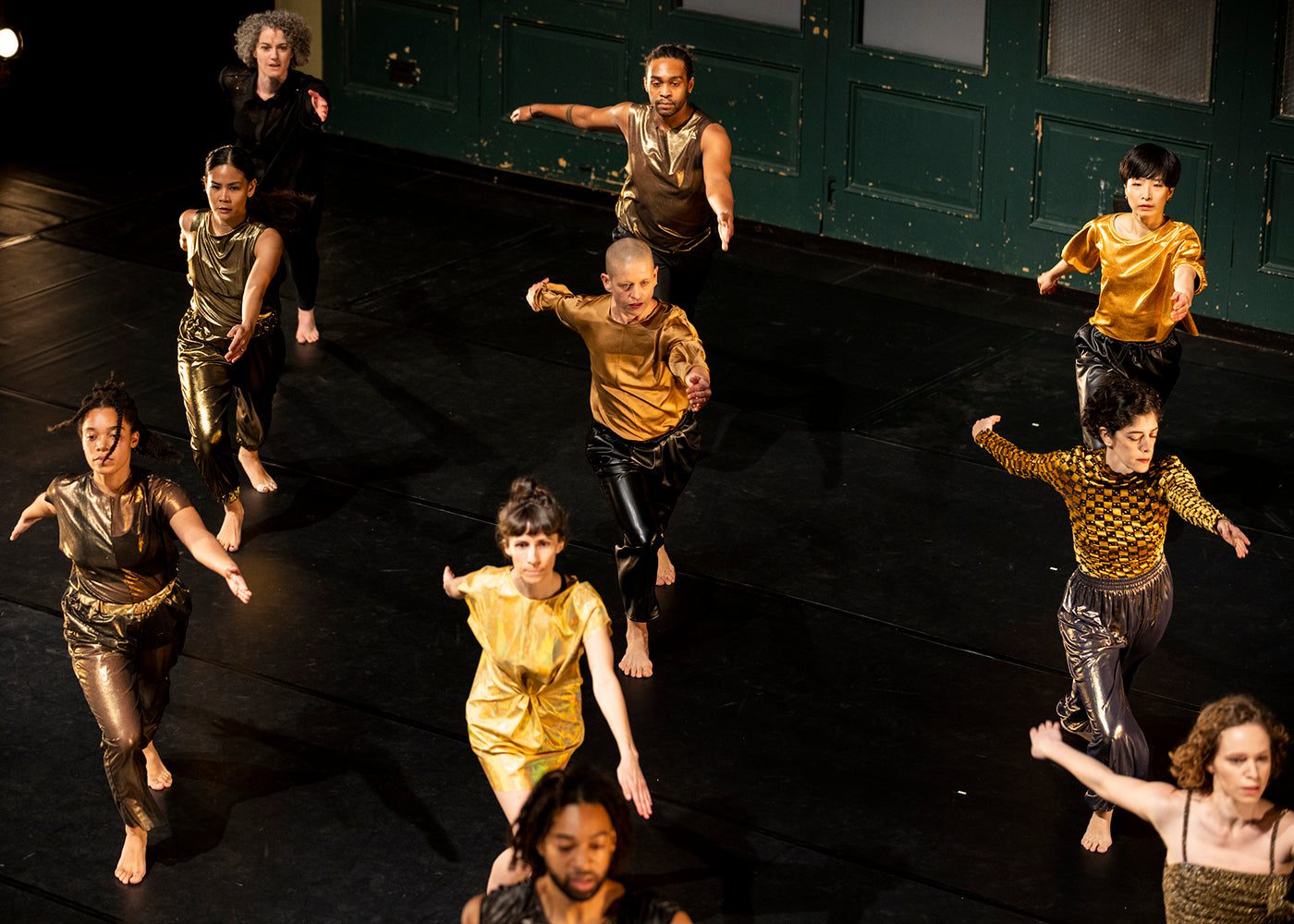 As “’lectric Eye” opens, a group of 14 bursts onstage, stepping in formation as runway fashion model swagger meets drill team precision. They criss cross the stage, arms swinging, hips gyrating, assorted gold and coppery mylar apparel flashing. It’s sexy, glitzy and mind-boggling in its intricate unison. As a group they step, turn, lunge, plié, kick, dip, relevé—constantly changing direction to a droning disco beat punctuated by the sound of drumsticks. Sound and movement are equal partners in choreographer Joanna Kotze’s work, and for “’lectric Eye,” musical collaborator, Ryan Seaton, emerges from the sound booth to perform a fully integrated role onstage. He plays his original electronic music, he sings, and while the drill team does its thing, he jumps rope. For a very long time.

Eventually the group breaks apart and individuals leap and strut in random traffic patterns. The energy is frenetic. There are near collisions. The stage gradually empties, leaving Kotze crouched alone. Though “‘lectric Eye” started development before the pandemic, one clearly feels the effect of lockdown isolation, loss, and the trauma of anxiety and discord. The entertaining opening number is followed with discomfiting solos by Kotze, Wendell Gray II, Symara Johnson, and Molly Heller. These dancers allow us to feel their experience in real time—the exhaustion, the coping, the giving in.

Each solo has its own sound environment. In Kotze’s we hear a faint, breathless female voice as she contorts herself into awkward shapes and wobbly balances—like yoga poses and ballet positions gone sour. Her floor work is tortured, yet the silver sequins of her leggings flicker like stars. When other sounds are introduced—the single note of a stringed instrument, a scratching on paper, the pop of a paddle hitting a rubber ball—I wonder if she’s responding to them as movement cues.

At his turn, Gray enters to a horn blasting and blaring lights. Muscular and athletic, he covers space with galloping leaps and lunges, and punches like a boxer. During Johnson’s solo, there is the whir of a vibrating wire, but mostly we hear the audible sound of her own physical effort: panting, groaning, wheezing, feet pounding the floor. She’s doing some kind of extreme cross fit exercise that includes shotput and kick boxing. At one point, she tilts back and gasps, collapsing to the floor. When she stands and dusts herself off, she rolls her eyes—enough already. She struts offstage and the audience applauds.

At the end, Heller’s solo moves beyond the punishing fitness metaphor that pervades ‘lectric Eye. Her movement is dancerly, yet nonetheless relentless. Given a dramatic instrumental score with a syncopated beat, she crosses the stage, kicking high to touch her outstretched hand. She paces in a large circle, chopping at the air with her arm. It’s an arresting moment when she stops to let down her hair. Facing away from the audience, she raises her shirt and undulates her stomach like a belly dancer. Resuming the circling, she’s a horse trotting the perimeter of a corral, shaking it’s mane. When she repeatedly bends at the waist, flinging her hair like a heavy metal head banger, it’s a kind of self-flagellation.

“’lectric Eye” is not easy to watch. The work is gutsy. Kotze and company looks you straight in the eye and holds its gaze. Yet it has beautiful moments. Memorable is a break in the action when Seaton, centerstage, belts out lines of a quirky song by Circuit des Yeux, “Is it a high dive you’re looking for?” “Or a 24-hour convenience store.” “Nobody said it was easy.” He doesn’t have control of the timing because Gray randomly snatches the mic away to mute him. Nevertheless, the instant Gray returns the mic, Seaton resumes right where he left off.

Next
Trees of Life