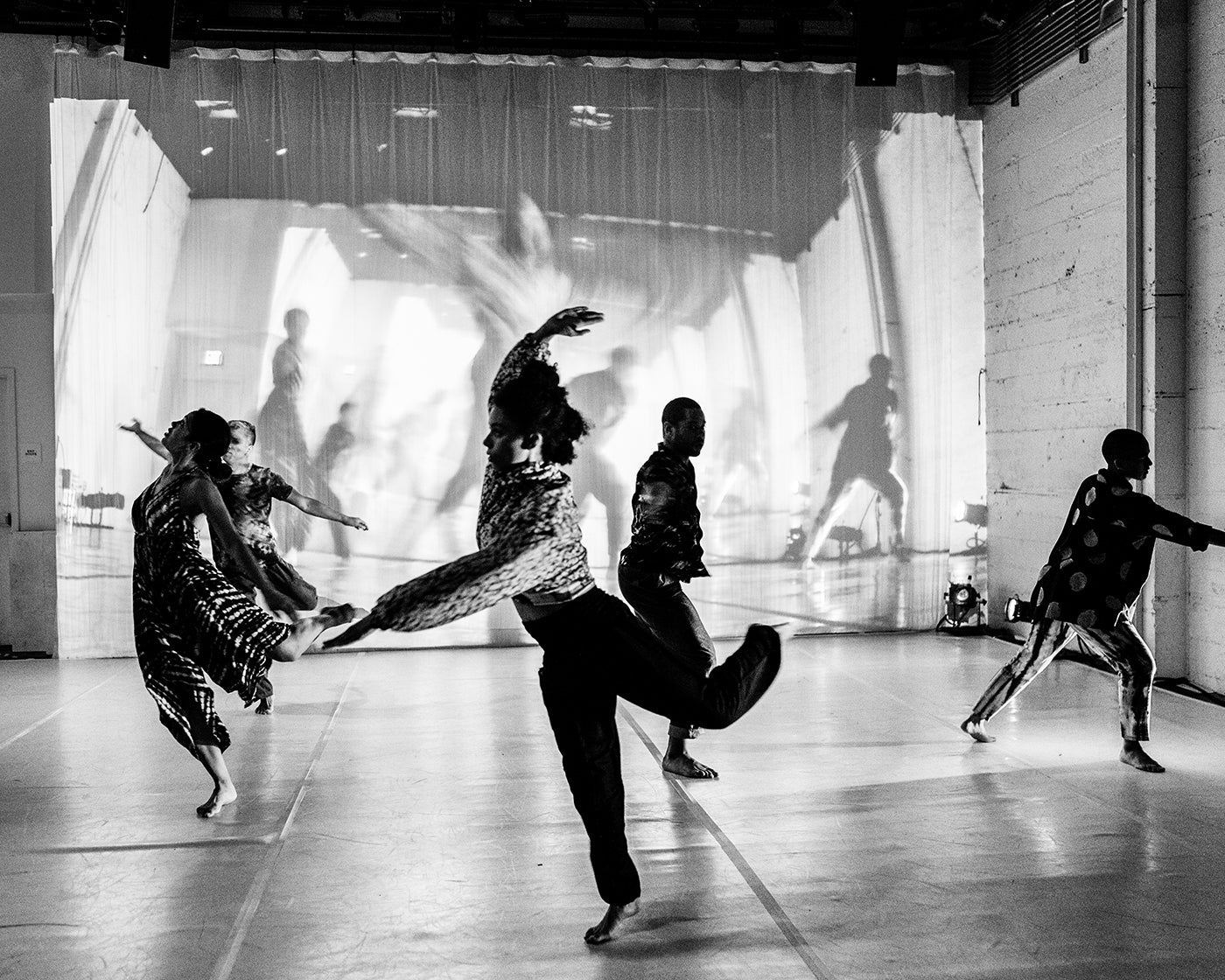 Gerald Casel's “Not About Race Dance”

Gerald Casel wears a green-grey tie-dyed t-shirt and moves his hands and feet in precise flicks to TLC’s pop hit “Waterfalls.” The text projected on the wall behind speaks in the first-person, telling us that he is performing phrases from Trisha Brown’s 1971 dance “Accumulation,” and that the song “Waterfalls” came out in 1994, the same year Casel saw Neil Greenberg’s “Not-About-AIDS-Dance”—a dance famous for, among other things, innovating the combination of text projections and dance Casel is now using.

“Tonight I am dancing in a big white cube,” the text continues,” pointing out the similarity to the big white cube in Trisha Brown’s 1975 dance “Locus.” “I am a brown body dancing in a big, white cube.” Soon Casel’s brown body is joined by four other brown dancers, all of them intensely present and riveting: Styles Alexander, Audrey Johnson, Cauveri Suresh, and Karla Quintero. Over the next hour they will reclaim the literal and sociological “white space” of postmodern dancing in episodes that are vulnerable, cathartic, clever, and delivered with compelling rigor.

I use the word “rigor” with some hesitation, knowing it plays into generalizations of San Francisco avant garde dance that are broad and yet, I think, broadly true. Until recently, we have not seen much of the technique-focused lineage of the Judson Church postmodernists in Northern California. In the 1980s and ’90s and beyond, activist dance dominated our countercultural edge, led by Sarah Shelton Mann and her collaborators, Keith Hennessy and Jess Curtis. I admire and am stirred by much of it, but it leans much more towards rawness of presence than dance training. This has begun to shift over the last decade as an indefatigable postmodernist named Hope Mohr has created forums like the Bridge Project, which included a 2016 collaboration with the Trisha Brown Dance Company, “Ten Artists Respond to Locus.”

Enter Gerald Casel. A professor of theater arts at UC Santa Cruz since 2013, he is recognizable from his career as a leading performer with in the company of former Trisha Brown dancer Stephen Petronio. (Casel was also the Stephen Petronio Company’s assistant director.) He has been presenting work regularly in San Francisco for the last eight years, as well as cofounding a collaborative discussion forum, Dancing Around Race. Alas, living three hours away, I have not been able until now to see his efforts. I walked out of “Not About Race Dance” hungry for more. To put it more bluntly, I left the theater thinking, “Holy shit, this is an ensemble with head, heart, and guts.”

The hour-plus performance is funny, tender, personal, and ultimately hopeful. Perhaps the heart of it is Quintero’s solo to her text, “La Revancha,” which translates to “rematch” or “revenge.” She beats her legs antically and then regathers for an “otro opportunidad” as other cast members sing-song, “welcome to Purchase”—the SUNY Purchase dance program, presumably. Voices call out for her name and then ask “Where are you from?” Mechanically she sidebends saying, “I feel so unsexy. I feel like a fucking child.” Other dancers try to “join forces” with her (“If we don’t fix our contractions, she’s going to ruin us!”) but soon they are dancing in the literal dark, flailing and exhausted. Death bells knell. Individual identity, one gathers, has been subsumed by academic conformity.

Eventually the dancers end up in a convulsing cluster, which is where most of the transformation in the dance takes place. Though there’s a screaming punk solo delivered by Styles Alexander and beautiful solos and duets (Audrey Johnson’s is notable for its virtuosity), “Not About Race Dance” makes surprisingly compelling drama of these five dancers physically tending each other on the floor, first to a version of the Rolling Stones’ “Wild Horses” and then telling one another “I won’t die and I won’t let you, either.”

A lot of the dance also involves one dancer videotaping the others, the live footage projected on the screen behind, which as an affirmation of “seeing one another” perhaps wore thin conceptually, and yet the intensity of the dancers’ connection kept the theatrical impact undiminished. The final section between Quintero and Johnson layers a blaring electric guitar with what seems to be a report of surf conditions—water temperature, “swells every 13 seconds.” (Excellent sound design by Tim Russell.)

This felt ominous, difficult to accept, and understatedly spiritual: It is terrifying that we are subject to these forces so much larger than the individual, and beautiful that we need each other and collapse into one another. Quintero and Johnson crawl together, at separate ends of the stage yet watching one another, and then sit against the projection on the wall, of light shining through trees. It’s profoundly ambiguous—which in our current ambiguity-intolerant society, is strangely reassuring.

“Not About Race Dance” is streaming through December 31, 2021: https://counterpulse.org/event/notaboutrace/

Next
A Serene Celebration