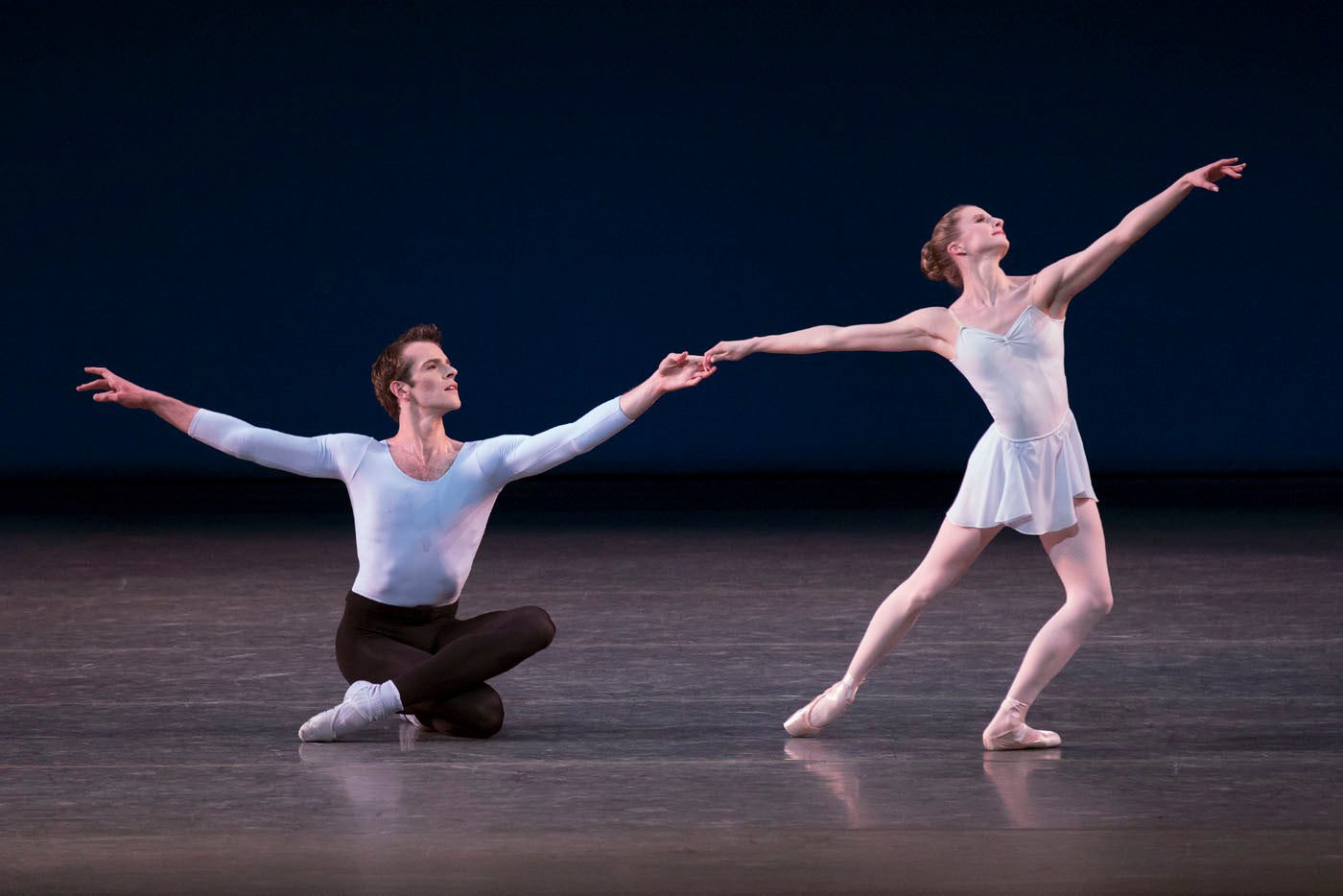 There’s a moment at the end of Balanchine’s “Divertimento from Le baiser de la fée” in which the two principal dancers embrace center stage, the heroine of the ballet grasping her hero’s waist, leaning on a bent leg on pointe, arched over completely backwards. “It’s as if she contains two different forces at the same time,” New York Times critic Alastair Macaulay writes:

“The ballerina, who still holds that backbend, and her partner gaze behind themselves—and yet they are propelled in the opposite direction, by her legs, which stretch, flourish and, walking on pointe, slowly lead the way.”

This strange and striking tableau took on new resonance as it appeared on the David H. Koch Theater stage on February 24, 2018, during the first of two New York City Ballet performances that day: “Stravinsky & Balanchine,” and the “Here/Now” festival.

The moment of tension between opposite forces was an apt representation of a company in its own state of flux, a young interim artistic team (Jonathan Stafford, Justin Peck, Craig Hall, and Rebecca Krohn) at the helm after former ballet master Peter Martins left the company in January after allegations of verbal and physical abuse and sexual harassment. Though the program was likely chosen before Martins’ retirement, viewing these two Winter Season programs back-to-back proved a study in contrasts: a divergence between NYCB’s past and future.

The matinée performance, “Stravinsky & Balanchine,” was quintessential New York City Ballet—a program of favorites, in a familiar form. The four dances on the program—”Divertimento from ‘Le Baiser de la Fée,’” “Duo Concertant,” “Symphony in Three Movements,” and Balanchine’s masterpiece “Agon”—have a history here. Beyond their familiarity, they are emblematic of Balanchine’s “eternal partnership” with Stravinsky; the choreographer and the composer collaborated on over 30 ballets, their partnership spanning some four decades.

The first dance, “Divertimento from ‘Le Baiser de la Fée’” (The Fairy’s Kiss), itself does not have a completely discernable plot, but derives its pastoral charm and slight foreboding from the Hans Christian Andersen fairytale “The Ice Maiden.” Stravinsky and Balanchine originally choreographed a full-length ballet of “The Fairy’s Kiss” in 1937, then Balanchine repurposed wisps of storyline and Stravinsky’s concert suite to create “Divertimento,” which premiered in 1974. The ballet begins inoffensively enough, a chorus of pleasant fairies moving through gentle tableaus that would not out of place in Swan Lake Act I, then becomes vastly more interesting as Megan Fairchild and Joaquín de Luz take the stage. Fairchild is especially good in this pas de deux, her lush port de bras and dramatic cambrés illuminating the wistful intensity of Stravinsky’s score.

The company trades in this abstracted fairytale for “Agon,” a showcase of bravura athleticism that the NYCB dancers attack with considerable force. This is Balanchine at his most hyper-stylized and coolly classical, his demanding choreography pushing the dancers off-balance and into startling contortions. Here, they shine.

The first cast of “Agon’s” pas de deux, Diana Adams and Arthur Mitchell, was afraid to dance these movements, Joan Acocella wrote in the New Yorker. Adams in particular worried she would botch them onstage, and perhaps out of fear or out of reservations about the duet’s overt sexuality, performed her role with a certain tentativeness. Dancing Adams’ part, Korowski chooses instead to imbue the part with a seasoned sensuousness, all dramatic extension and brilliant control. “After Agon—” the man sitting next to me asked, “where do you go next?”

Though “Agon” was Balanchine and Stravinsky’s last collaboration, the NYCB program continued with two more of Balanchine’s leotard ballets: “Duo Concertant,” a pas de deux that shares the spotlight with two onstage instrumentalists, and the cheery hodgepodge of “Symphony in Three Movements.” Though “Symphony in Three Movements” is joyfully postmodern, the corps de ballet bouncing their mod ponytails, and soloists sporting bright pink leotards, I vastly preferred the hushed intimacy of “Duo Concertant,” a pas de deux between two dancers (Sterling Hyltin and Russell Janzen), between violin and piano, and between dance and music. Before each section of their pas de deux, Janzen and Hyltin stand motionless at the piano, listening. I could think of no better way for a choreographer to honor a composer than to leave a space for the music onstage, and to let it speak for itself.

Before the curtain lifted for February 24th evening performance of the “Here/Now” festival, a special bill of contemporary work that “celebrates ballet today and what its future might hold,” there was an announcement: the program would conclude with an afterparty, and there would be Brooklyn Brewery beer on tap.

If the “Here/Now” festival’s previous efforts to court a younger New York City contingent wasn’t already apparent—a program including music by Sufjan Stevens, an art installation of glimmering, silver balloons by Jihan Zencirli, and tickets for a friendly $30—craft beer would prove a powerful motivator. The theater was filled with young New Yorkers in sleek trousers, too cool to acknowledge the presence of Natalie Portman, likely there to support her choreographer husband Benjamin Millepied. Jihan Zencirli’s friends trailed behind the giddy artist, outfitted in silver foil costumes that seemed wonderfully appropriate for an alien Berghain.

Yet for a program ostensibly about the future of ballet, the ballets of February 24th’s “Here/Now” festival seemed somewhat linked to the past. Though each of the four ballets that made up this program—“Neverwhere” by Benjamin Millepied, “Mothership” by Nicolas Blanc, “The Decalogue” by Justin Peck, and Alexei Ratmansky’s “Namouna, A Grand Divertissement”—premiered fewer than ten years ago, the program felt solid, if a little safe.

All four ballets vacillated between adhering to tradition and transcending it completely, some more successfully than others. The night began on a high with Millepied’s “Neverwhere,” where three central couples move through a dark stage, lit only by a triangular gradient light. The ballet had first debuted with costumes by designer Iris van Herpen, ornamenting the darkly futuristic ballet with a mood of “polyurethane pastoral.” February 24th’s performance ditched the costumes, the dancers instead outfitted in plain black leotards Balanchine would support. In this run of “Neverwhere,” Millepied proved he didn’t need the outlandish costumes for the ballet to work. Instead, the focus was on the three couples, who move fluently through Millepied’s capricious allegro sections and intimate pas de deux. In “Neverwhere’s” futurescape, intimacy often carries with it a hint of a threat—a flat blade of a hand that moves as if to cut, a caress that lingers like a warning. The path into the future is cast in shadow, but the six dancers here dance beautifully in the darkness.

Justin Peck’s choreography for “The Decalogue” was similarly subdued, with ten linked vignettes and a piano score by a nearly unrecognizable Sufjan Stevens. In the third section of the ballet, Harrison Coll and Sean Suozzi are standouts. Rarely the case when two men dance together onstage, theirs was not a bravura, manhood-measuring contest. Instead, Coll and Suozzi parallel each other, their tender, tentative movements culminating in an almost-pas de deux.

Though the oldest ballet of the bunch, Ratmansky’s approach to the past seemed the most forward-thinking. A deconstructed story ballet, “Namouna” has all the necessary ingredients—a mysterious, otherworldly corps de ballet; a lovestruck, daffy cavalier; a few heroines—but gets rid of most of the plot. A send-up of Édouard Lalo’s 19th century French ballet (which flopped), Ratmansky tweaks the classic ballet tropes and allows his dancers to exaggerate into them; in his “Namouna,” the “feisty,” Kitri-ish ballerina dances herself breathless, in what Sara Mearns said was the hardest two minutes she’s ever performed; the languid, sultry love interest smokes cigarette after cigarette until she falls over, and the perfect rows of otherworldly sylphs and swans and shades don bathing caps and Louise Brooks wigs instead of feathers or gauzy veils. (Ashley Bouder was phenomenal as the chainsmoking vixen, who looked like she was having a complete blast.) In revising Lalo’s ballet, Ratmansky gives the audience a new lens through which to view the years of ballet clichés, in all their kookiness and camp.

Ratmansky, like Stravinsky and Balanchine, seems to view revision as an integral part of innovation, believing in what New Yorker critic Arlene Croce called “the labor of art as perpetual renovation.” Stravinsky himself liked to quote Goethe: “Everything has been thought of before; the task is to think of it again.” Such is the task of a ballet company in the midst of its own renovation; revision in the future will require a clear and creative look into the past.

Next
A Welcome Redress