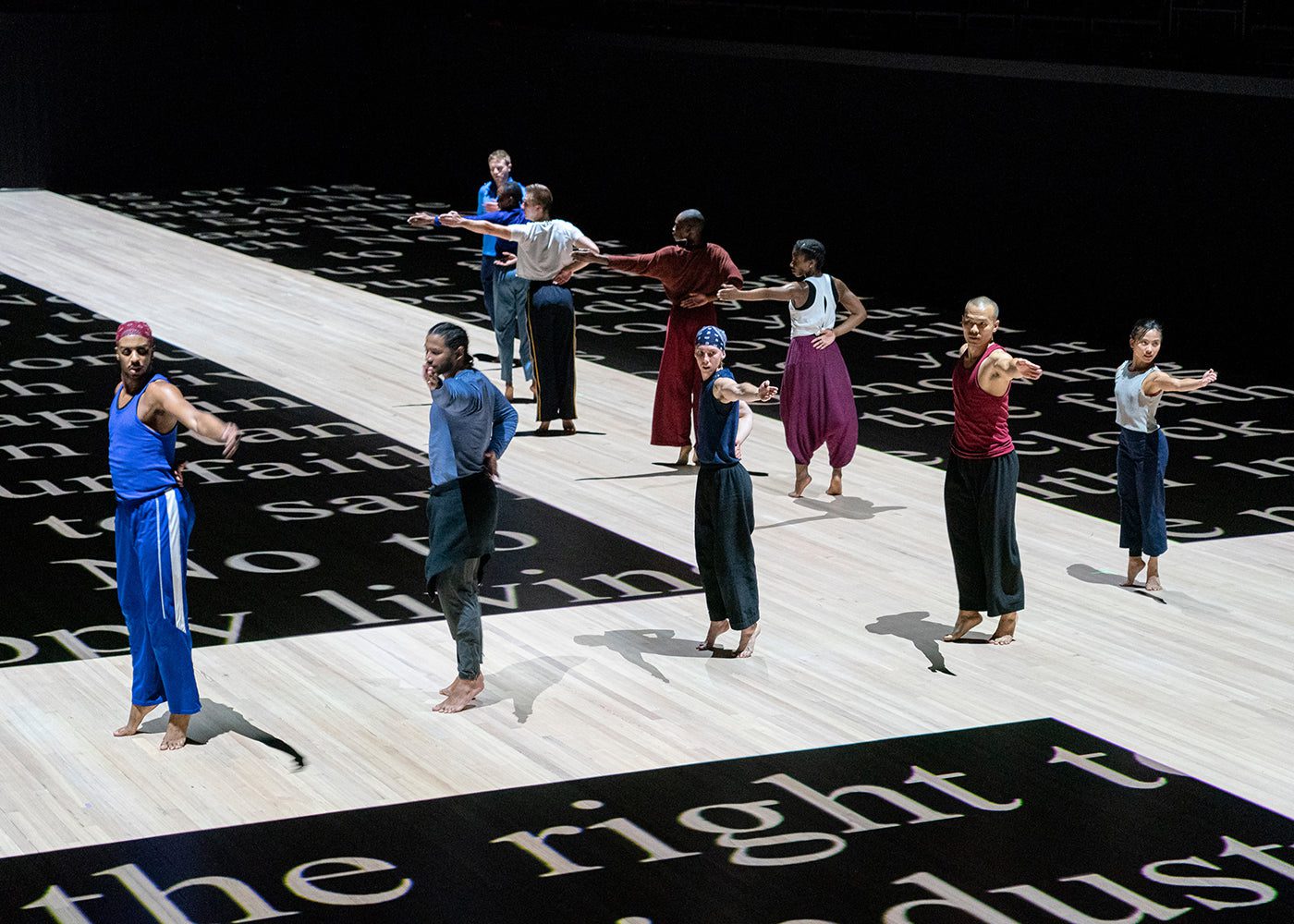 To look at the ocean can be deceiving. With feet planted in the sand, facing the horizon, we think we know where we are; the tide signals for how long. To look into the ocean is a different story: Looking in offers no sense of start and stop, no sides to stand on, no tide nor time. Looking in confronts us only with an endless sense of motion encompassed by a larger unknown. Bill T. Jones’s long-awaited “Deep Blue Sea,” a work massive in both size and depth and presented at the Park Avenue Armory in New York through October 9th, thrusts its audience into that sea, using movement, text, music, and hypnotic projections to disorient us into revelation.

The piece starts before the beginning. To get to your seat—elevated seating designed by the acclaimed architect Elizabeth Diller—you have to walk across the vast Drill Hall stage where Bill T. Jones, himself, is already moving under house lights. This is the first time that Jones has performed in over 15 years. He is the leading figure of the piece, acting as participant as well as narrator, guide, but also traveler. Speech has become an increasingly important part of Jones’s work (he now refers to his group not as a dance company but as one of body-based expression that handles movement, text, and music) and Jones reads from a number of texts, personal and archetypal, drawing in particular from Martin Luther King Jr.’s “I Have a Dream” speech and Herman Melville’s Moby Dick.

“Deep Blue Sea’s” sense of time is not linear nor cyclical but fragmented, like memories. We recognize passages read from “I Have a Dream,” but they are all jumbled up, deconstructed to create new meaning. In addition to being heard, phrases like “To able be will we,” a former declaration that now seems more like a question, appear onstage through impressive lighting and projections (by Liz Diller and Peter Nigrini, with additional lighting by Robert Wierzel). While Jones recites onstage, he travels in a spotlight which sometimes turns black with a simultaneously synthesized bang!, the lighting an ingenious effect that creates a shadow—a hole?—which nearly consumes Jones, almost erasing him.

Soon, Jones introduces Moby Dick, inserting personal anecdotes of the first time he read the book in high school and focusing on the character Pip, the young Black sailor boy who is harassed as a kind of jester and who has supposedly lost his mind after having been abandoned and left for a long time alone at sea. “‘Pip saw God’s foot upon the treadle of the loom and spoke it;’” Jones recites, “‘and therefore his shipmates called him mad.’” Jones lists the many things he remembered from Moby Dick upon reading the book years later: “I remembered the water,” Jones says. “But for some reason, I didn’t remember Pip—why?”

From here we are plunged into a ­­­­­journey that weaves in and out of the conscious and subconscious, memories and things forgotten, allusions and archetypes. The exceptional Bill T. Jones/Arnie Zane company members command the enormous stage with versatility in movement styles ranging from angular postmodern vocabulary, ecstatic and vibratory dancing, and supple contemporary partnering with dancers moving in and out of the floor and across the stage with ease. Together, the dancers and Jones create shapes of ships and a whale’s jaw in tableau-vivant-esque frozen images.

Soon after the dancers are first introduced, the stage is actually emptied and the audience is immersed into an amazing projection of the sea, multiplied exponentially by mirrors which are attached to the bottom of the seating structure, framing the stage. The sea is a brilliant amalgamation of blues and greens which move to ocean sounds (electronic score by Hprizm, aka High Priest, Rena Anakwe, and Holland Andrews). It is beautiful and terrifying and reminds us, from our raised position in the audience, that this whole time we have not just been seeing Jones and his dancers, but we have been there with them; we, too, find ourselves at sea.

The idea of the forgotten, as introduced by Jones’s experience of forgetting Pip, persists throughout the work. Jones says, repeatedly, “I don’t” and “you don’t remember.” When he says, “we don’t remember,” the idea of a collective memory is revealed, one that could be inspiring, but is often tragic, especially as it pertains to race and the erasure of African American experience and oppression, which occupies a vital role in “Deep Blue Sea.” Why don’t we remember Pip? Why do we allow for an entire history of people to be swallowed up, denied, and abandoned? It is generous phrasing to use “we” as opposed to “they,” but Jones purposefully emphasizes Dr. King’s idea of the single strand of destiny which promises the contrasting fates of “living together as brothers or perishing together as fools.” Again, the sea acts as metaphor: Whereas viewing the water from the beach shows a division of shores, looking directly into it reveals a predicament independent of shores, an all-encompassing force that surrounds all those within it and promises a fate much more complex than that of the individual.

That said, Jones is certainly not exonerating nor even hopeful when it comes to African American oppression at the hands of white supremacy. Particularly during the finale when 90 community members powerfully fill into the Hall as Jones reads “I Have a Dream,” there are moments of outright rage and many of despair. The now-extended cast depict a march and protest, at one point linking arms and pushing through resisters across the stage. People throw what could be rocks or maybe grenades. The visual and spatial intricacies of Jones’s work are fascinating and dynamic, such as when the entire cast surrounds a still Jones, moving quickly but with little change, creating the effect of a time lapse. Shortly thereafter, the cast is running laps around the stage while sequentially latching on to one another, creating huge links that are constantly evolving as the first breaks off and attaches to the end, becoming the last. This section ends with everyone on the ground, lying on their backs and rolling slowly in unison to the right and left like rolling waves or corpses rolling in graves.

This unified movement occurs in the shape of a cross, one of many representations of religious imagery. Religion, God, and a struggle with the two are omnipresent in the work. The original vocal score by Nick Hallett features allusions to “Sorrow Songs,” songs which W.E.B. DuBois describes in his The Souls of Black Folk (another textual resource for the piece) as “haunting melody from the only American music which welled up from black souls in the dark past” and which are often religious in nature.

In fact, Jones himself appears to represent a prophetic role. At the beginning, we might think of him as Ishmael, the narrator of Moby Dick and the sole survivor of its doomed protagonist ship, The Pequod. However, as the piece continues, we realize that maybe Jones is not Ishmael at all but rather Pip (whom Jones says in the beginning he now relates to), the one whom “the sea . . . carried down alive to wondrous depths, where strange shapes of the unwarped primal world glided to and fro before his passive eyes . . . and Wisdom revealed his hoarded heaps [of the] joyous, heartless, ever-juvenile eternities.” Whom upon being submerged in the sea had seen God’s foot, both spoke and danced it, prophesying the possibility of the triumphant dream-vision of King while warning of the catastrophic wrath of Moby Dick.

Concluding the piece, each cast member speaks one sentence into a microphone about “what they know,” a question Jones has already prompted his dancers to consider earlier on. While each member declares their piece of knowledge, we realize that there are actually only a precious few things of which we are truly certain. In fact, instead of exiting “Deep Blue Sea” with clarity, we leave in a state of mystery. And yet, looking in, we occasionally recognized our own reflections and those of each other. If Jones was Pip, perhaps we became Ishmael, emerging overwhelmed and bewildered, yet with a witness’s responsibility and a story to tell.

Previous
Water on the Water

Next
Return to Form