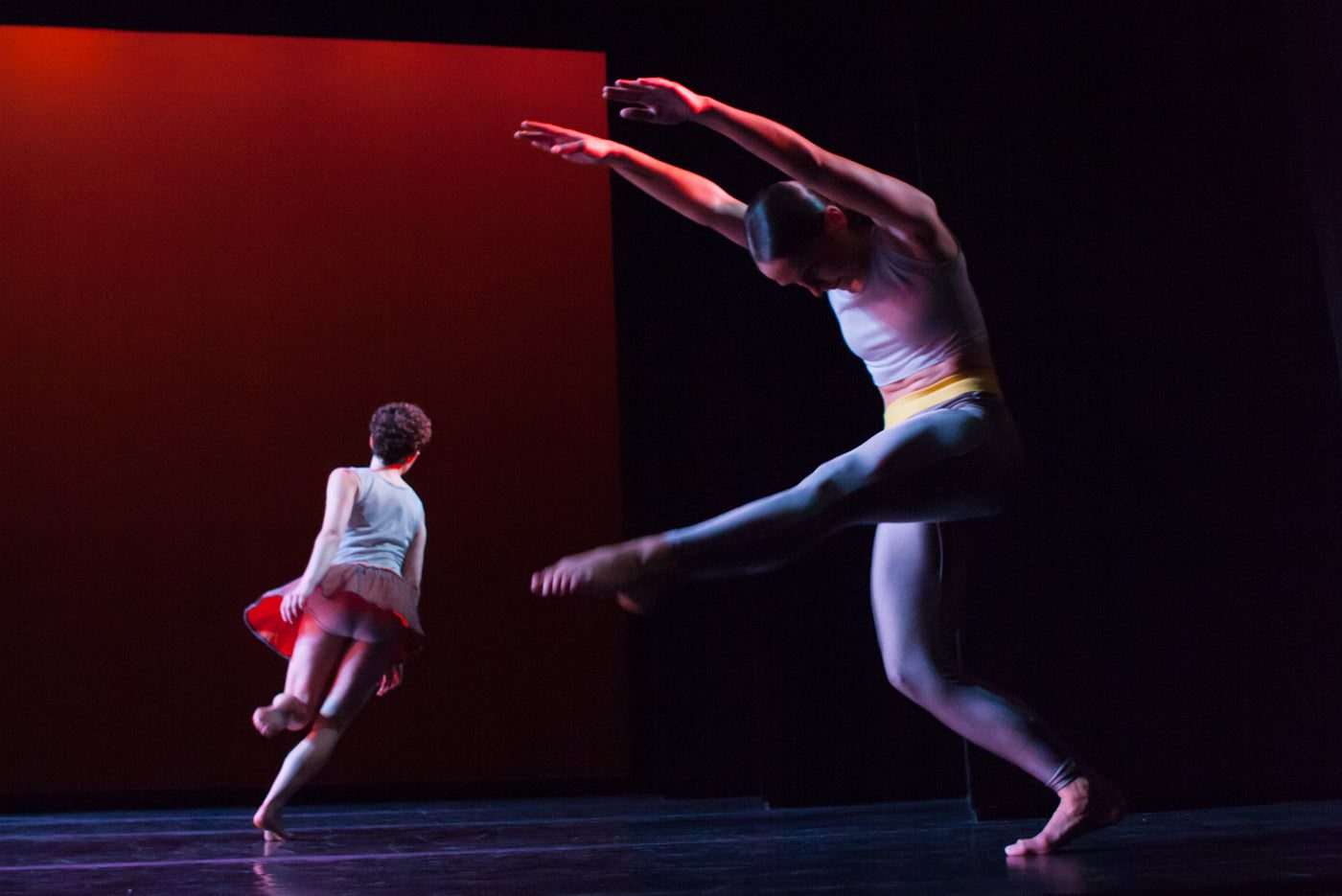 Dance Heginbotham at the Joyce Theater

We could be watching children flit across an imagined stage, constructing a mock performance for their elders or, perhaps, their porcelain dolls. The six dancers here are innocent—ignorant, even. They stretch their arms and snap their fingers. They are focused on perfecting their practice. But they are not trying to charm each other—yet.

It is deeper into “Angel’s Share,”—the first piece of Dance Heginbotham’s Joyce Theater debut—when the dancers are catapulted into adolescence. They feel the sting of exclusion, the craving for companionship. One male dancer circles the stage, wanton and withdrawn. Lost, he does not take note of the dancers who sway in sync with him, but when they are gone, he bends towards the wings of the stage, seeking out comrades.

Artistic director and choreographer John Heginbotham is deft at teasing out peer matches and mismatches, identifying outcasts, and fraying social formalities. Throughout the evening, he tinkers with the relationships among his dancers. And, accompanied by live music—for “Angel’s Share,” a trio of strings—Heginbotham also tests his dancer’s abilities to conduct themselves in sync with a moving score.

As Heginbotham’s male performers depart the stage, the petite and sprightly Sullivan springs after them—that is, until Jones clasps her hand on Sullivan’s shoulder. Not yet, she suggests. You must learn how to act. You are a young woman now, and this isn’t child’s play. On cue, Sullivan sinks to the floor and watches Jones slide her hands over her ribcage, then her thighs. As the willowy Jones traces her curves, she pulls her partner through a sort of awakening. The two dance, in sync, as allies in a brave, new, adult world.

But when Sullivan overcomes her apprehension, she fawns over her male counterparts. She tugs at the men, whose arms are locked in a closed circle. And her eagerness for inclusion incites jealousy in Jones, who swiftly lurches towards the men. The women do not, however, tussle over a romantic partner; they fight, instead, for each other.

In “Diamond,” Heginbotham continues his inquiry into maturation by turning over the stage to soloist Kristen Foote. The piece, originally developed for the Kristen Foote Dance Project’s “The History of Her,” is a triumphant take on a struggling artist. Set against a hazy black backdrop, the striking Foote finds her mark on the stage, then nods to pianist George Shevtsov, who is perched near the orchestra audience. Her gaze is suggestive; the following routine, sultry.

As Foote eases into the set, she places her hands on her knees, then shimmies backward. Her wrists, her hands, her fingers curl towards her chest. She beckons the audience. Come chase me. This showgirl routine is disjointed and chaotic, but these conditions are intentional—and exhilarating. Foote is theatrical: she mimes bouncing a basketball, she kicks up her heels like Shirley Temple, she busts out a set of “Hello world, I’m here!” diva arms. With each step, she picks up speed and intensity. She pushes: I will stun the audience. She probes: I will be a star. She ponders: If I stop moving, I’ll lose everything.

Heginbotham has choreographed a juggling act here: Foote is, at once, a showgirl, a temptress, a villainess. But she is also a woman reaching for stardom, the type that would take her beyond a smoky jazz club or basement lounge. And so, increasingly, Foote she shirks off her frantic search for a signature “style” and creates her own. Her steps become more confident, her movement more fluid. Finally, Foote touches one arm with the other and traces her limb from shoulder to wrist; she is getting to know herself. She retreats to the back of the stage and nods to Shevtsov. Then, she departs. She does not need another man’s rhythm to guide her. She can find another stage to better suit her. She can shine on her own.

In the evening’s closing piece “Easy Win,” Heginbotham once again proves his ability to stage social tension—and here, he also reveals his sense of humor. The number is at once a recollection of Heginbotham’s childhood dance classes and a satirical meditation on the corrupting—really, the perceived corrupting—influence of popular dance styles on teenage sexuality and promiscuity.

“Easy Win” begins innocently enough, with pianist Ethan Iverson—who sits on the stage—plucking out an punchy introduction to the piece, for which he has composed the music. looking at the audience, then the dancers. His gaze contains mild distaste and annoyance: And what brings you all here? Both are played for laughs.

The dancers begin the piece with plies, lunges, and other stretches. But soon, they slip in go-go girl arms, head rocks, and cha-cha slides. One dancer even shuffles across the back of the stage with her hips thrust forward and plunks out a variation of a moonwalk.

These moves are playful: Foote, who continues to stand out, even in this ensemble number, passes her fellow performers with a knowing smile. These moves are also entry-points into more intimate interactions among the dancers. As the spotlights turn to an ominous red, the dancers take on a possessed energy: one female dancer, for instance, rubs her thighs incessantly. A stain on her conscience! Sullivan and Jones, returning for “Easy Win,” look, respectively, like an innocent ballerina and a high school sock hopper—until, that is, Sullivan pulls a male companion to the ground for an embrace and Jones cozies up to Iverson.

This twister of teenage rebellion is electrifying; here, Heginbotham has vested his work with a degree of vitality that only now feels missing elsewhere in the program. Even when this sequence fizzles and the dancers snap back into a more standard ballet routine, the piece remains enthralling.

As the dancers form a line at the front of the stage, they look if they are about to receive their sentence for promiscuity. With deliberate, regal, and repentant steps, their movement resembles the more conservative choreography of “Angel’s Share.” But this is a line out of “Easy Win.” And so, just as the dancers snapped into order, they jump out of it: hurling themselves towards the left and right wings of the stage, they spring their spark—of unpredictability, of rebellion, of vitality—on the audience one more time. Heginbotham knows how to play.

Next
Art of Falling