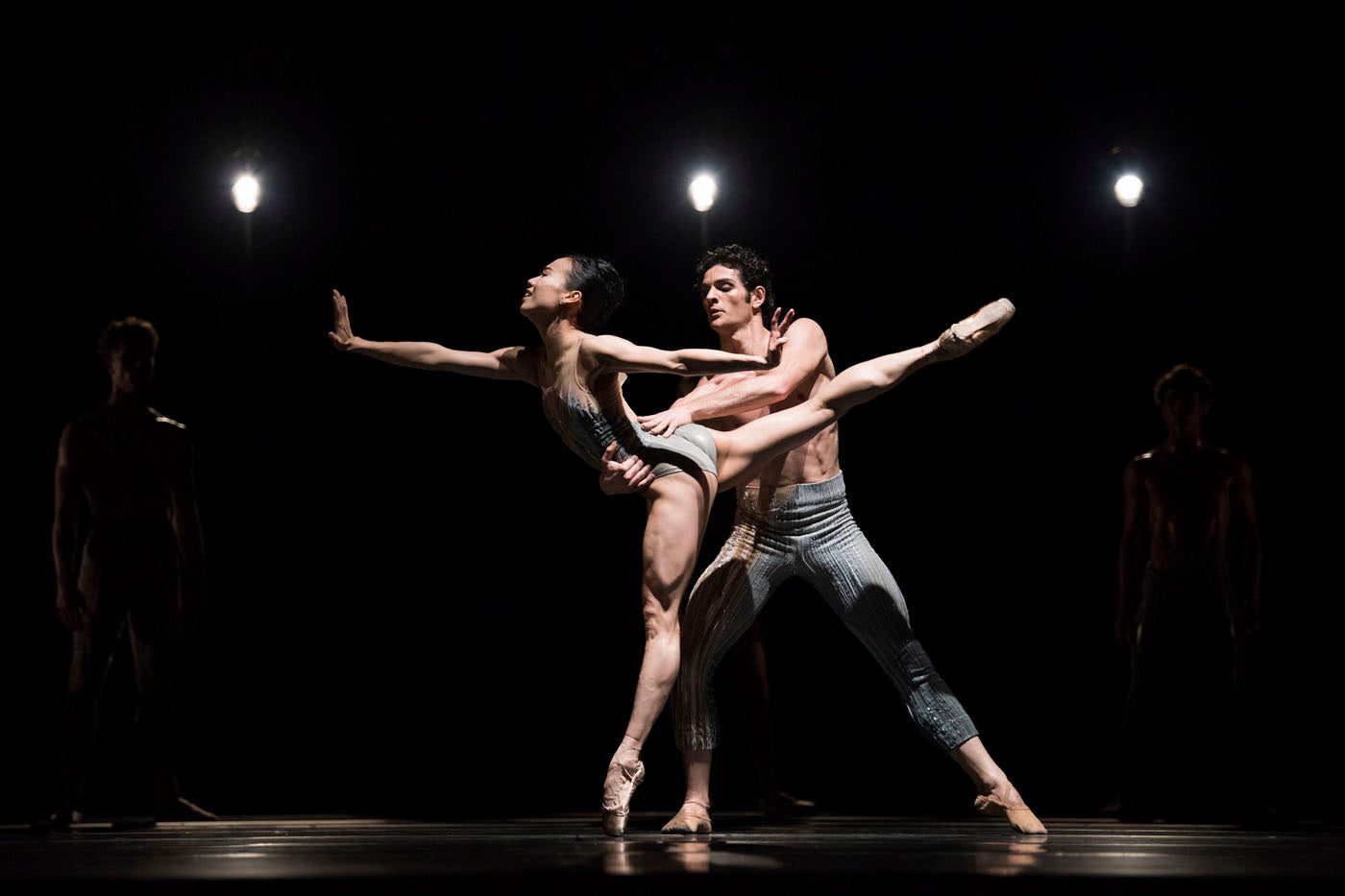 A festival of new works in search of ballet’s future must be valued as much for the conversation it catalyzes as the new dances themselves, and on this count alone, San Francisco Ballet’s Unbound festival ranks as a landmark success. Heated, giddy, disappointed, perplexed: Talk echoed through the War Memorial Opera House lobby all last week, as audiences rushed from candid panel discussion to curtain time, and the 12 international choreographers commissioned for this sweeping, questing survey paced the aisles, and glamorous visitors like Julie Kent flitted through the crowds. Ballet diehards and newcomers alike compared knee-jerk reactions. And the last of the four programs on offer gave everyone prime fodder, juxtaposing hard-earned sublimity (Dwight Rhoden’s intensely felt “Let’s Begin at the End”) with spectacular absurdity (Arthur Pita’s cheerfully superficial “Björk Ballet”).

For the debacle of the “Björk Ballet,” I am grateful. Every festival could benefit from a shamelessly silly low-bar entry, and to his great credit, Portuguese/South American raconteur Pita gave us one that was flagrant, unpretentious, and at least graced by the beauty of Björk’s recorded voice. Think Burning Man ritual crossed with SF Ballet’s former era of Michael Smuin populism (but without Smuin’s level of craftsmanship). I mean this most seriously: such works throw into relief the vital beauty of a ballet like Rhoden’s, and help us think through (without need for sneering) the unanswerable question of what art is.

For a “you know it when you see it” answer, Rhoden’s ballet remains powerfully in mind. There was plenty to take in during the first three-fourths of this almost elegiac arrangement of Bach, Philip Glass, and Michael Nyman: simple costumes the color of burnished stone; a back wall, also stone-like, with doors that opened for dramatic entries; and of course Rhoden’s densely detailed, precise movement vocabulary, in this case emphasizing the women’s forced arch foot between daring partnering, a woman’s foot just grazing a man’s retracted abs as her leg swings through.

The arms are stark, modern, sometimes slapping the thighs, sometimes weirdly gesturing as though to reach through the crotch. But what I noticed most—and I’m sure Rhoden trained me, subliminally, to register it—was a small moment of Frances Chung pressing her hands to the mouth of her partner, Angelo Greco. Throughout, Chung was the apex of an unnameable drama playing out between her, Greco, and an exuberant not-quite-interloper, Esteban Hernandez. But at the end of the ballet, when the back wall lifted and all around was blackness, we were left with just Greco and Chung, now pressing her hands to Greco’s mouth more desperately, now surrendering balletic polish in a moment of bereft human need. It felt like the inevitable moment of truth between these two. It felt utterly non-engineered and yet fated, like the end of an enduring short story.

To study “Let’s Begin at the End” side by side with Stanton Welch’s contribution to the festival’s Program C, “Bespoke,” would I think be fruitful for developing choreographers. Why do Rhoden’s relationship dynamics feel so true and earned, and Welch’s feel so baffling and forced? Welch’s seemed to me the most self-consciously boundary-pushing and yet the most unintentionally dated of the ballets on the festival. The music again was Bach, the vocabulary classical but more classroom-like—as a friend said to me, “Watching that, I felt the pleasure I’d get from seeing a really good company class.” The datedness, perhaps, came in the costumes by Holly Hynes, white paint-smock-like tops for the men, and white leotards for the women with bands of bright color. But none of that troubled me so much as Mathilde Froustey inexplicably desperate for Carlo Di Lanno, and he laying her limp body on the floor, kneeling and gesturing in a weirdly triumphant manner. And why the men partnering men at the end of the ballet—why, in a festival where same-sex partnering was everywhere and often beautifully choreographed, did this feel inorganic in Welch’s work? Why did the story not hold?

Stories, implied and overt, and story’s relationship to an art form that, executed by the human body, can veer representational or abstract—that’s an old question in ballet, but one that compelled me as the tightwire to be tread even as ballet’s movement vocabulary moves into the future. Three entries in the festival declared their own relationship to story and walked the line impressively. My favorite of these was Trey McIntyre’s “And Your Flesh Shall Be a Great Poem,” inspired by the life of his mid-western grandfather and set to whimsical indie pop music by singer-songwriter Chris Garneau.

The movement was equally whimsical, five men in brown trousers and white shirts (excellent costume design by Reid & Harriet) hopping with bent knees, flexed feet, and deeply contracted torsos. Jennifer Stahl and Sasha De Sola, otherworldly and siren-like, triangulated Jaime Garcia Castilla, and Lonnie Weeks had a tender duet with Isabella DeVivo in a blue housedress, but the heart of the ballet was a long closing solo for Benjamin Freemantle, in only boxer shorts that McIntyre has said evoke family lore of his grandfather wandering through town nearly naked. Freemantle danced with a stool whose circular top evoked the ballet’s nexus image of the moon in eclipse, the choreography emphasizing full-bodied engagement with the floor. To be honest, I think “Your Flesh Shall Be a Great Poem” would play better in a much more intimate theater, in a modern dance context. But I also think it is a true, textured work of very personal art.

The work of British choreographer Cathy Marston seemed more scaled to the opera house, and her dramatization of Edith Wharton’s novel Ethan Frome, “Snowblind,” was lovingly received. I will admit that I am not generally excited by ballet adaptations of literature, but Marston goes deeper than most, creating a worthy role for Sarah Van Patten as the infirm, controlling wife, and the closing image of the love triangle with interlocked arms, pulling back from each other yet dependent on the tension to stand, was resonant. More exciting to me was young Myles Thatcher’s first foray into narrative ballet with “Otherness,” in which Sean Orza and Max Cauthorn broke out of two social groups in swimsuits and caps to delight in each other as the Dr. Seussian ensemble, led by Jahna Frantziskonis, worked to keep them apart. Myles’s response to the music of John Adams was fresh, and I think this adventure will bring new possibilities to his future work.

For the abstractionists of this festival, we had Britain’s David Dawson contributing a ballet of many racing lifts (I do hope the men all have appointments with their chiropractors!), ingenious white front/black back costuming by Yumiko Takeshima, and a central movement idea of splayed hands, one wrist turned up and the other down. “Anima/Animus” dazzlingly danced but, alas, emotionally monotonous. Not so Edwaard Liang’s “The Infinite Ocean,” to a lyrical score by Oliver Davis, and featuring a slightly ramped stage topped by a giant moon designed by Alexander V. Nichols. The emotional range here from tragic to hopeful was lovely—so rarely do we get to see powerful Sofiane Sylve be sweet and playful—and the level of craft appreciable. Did anything in “The Infinite Ocean” stretch conventions or extend our understanding of what ballet can do? No. Would I watch it again? Certainly.

And then: the spectacles. In addition to Pita’s Björk extravaganza (“the psychedelic chicken ballet,” a pithy audience member dubbed it), we had Annabelle Lopez Ochoa’s “Guernica.” Yes, “Guernica” as in the Picasso painting depicting horrific suffering in the bombed Spanish town. Which makes Ochoa’s festival contribution less innocuous than Pita’s, because here we have something quite serious invoked as inch-deep pretext for Cirque du Soleil-like tableau, two couples wearing horns and sexily running each other down as rock/techno music blares and the ensemble circles. Oh, Dores André, reigning festival muse. So physically articulate, so all-giving, and so energized here and in all the ballets that leaned on her extraordinary glamour.

Wherever the future of ballet choreography may be headed, the present of this company—its culture of vulnerability, commitment, interconnectedness on stage, and generosity towards the audience—is thrilling.

That points to the true triumph of this festival: San Francisco Ballet’s dancers. Wherever the future of ballet choreography may be headed, the present of this company—its culture of vulnerability, commitment, interconnectedness on stage, and generosity towards the audience—is thrilling. One mark of how Pita’s “Bjork Ballet” fell short is how sloppy the dancers looked in it—the only time we saw them dance sloppily during the whole festival. This points, I think, to Pita leaning on them to fill in the movement, which works fine enough for an ensemble, but breaks down with partnering. Had he fine-tuned them, they would have executed.

Where to start with the shout-outs? Sofiane Sylve might take MVP, so exacting but also so human—at the curtain calls for Liang’s ballet, she actually received bigger whoops than SFB’s unofficial assoluta, Yuan Yuan Tan—first time I’ve seen that. Sarah Van Patten and Luke Ingham’s mature partnership repeatedly mesmerized. Angelo Greco served as festival Adonis. Esteban Hernandez ascended (when did he get that six-pack?), leading Lonnie Weeks and Benjamin Freemantle as a generation of virtuosic men who project as much tenderness as power. And then there was Frances Chung in Rhoden’s “Let’s Begin at the End.” Always a kind of “A-student” dancer, but never flirty or naturally teasing, she has struck me (and I am probably being unfair in this) as low-personality in recent seasons. But the Rhoden ballet revealed her—or in it, she revealed herself—as fierce and hurting and impassioned. I am left in utter respect.

A bottom line: Nothing in the Unbound festival left me with the shock of recognition SFB audiences must have felt, say, when SFB commissioned William Forsythe’s “New Sleep” back in 1987. But the web of smaller questions arising from this festival feels just as urgent. When will female choreographers achieve equity in the ballet world? How does partnering adapt to our shifting gender politics? What will happen to the role of the orchestra as pop music dominates? Can we please keep some tutus? I think it will actually be the culture among our current dancers, rather than these choreographers, that will lead the way. At the same time, I am heartened by a comment Dwight Rhoden seemed to surprise himself by making on a festival panel discussion about “fostering diverse voices.” “Honestly, I think I need to just keep doing what I’m doing,” Rhoden said. Given the art he’s making, he is so right.

Previous
Dancing on the Edge