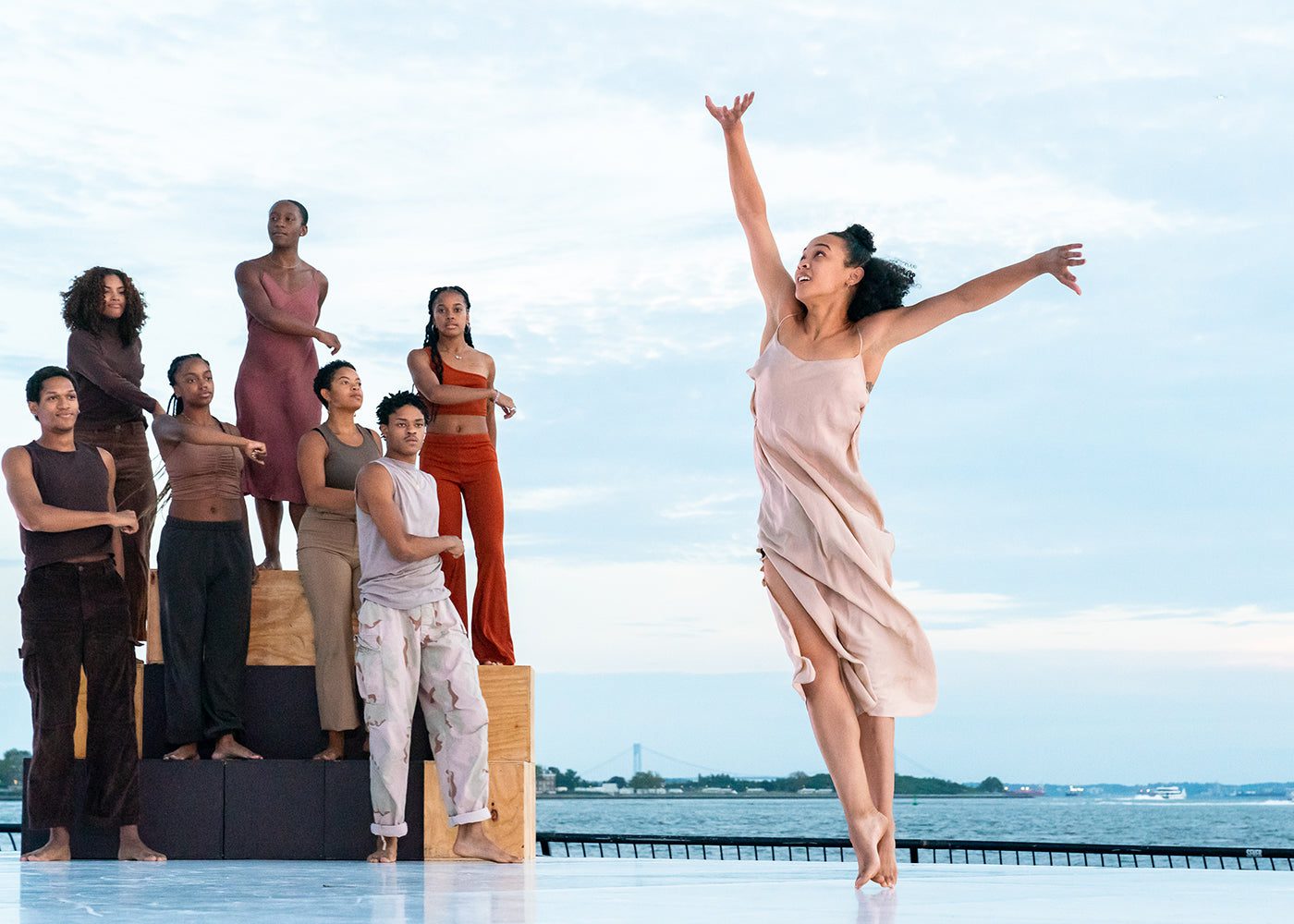 Battery Dance Festival returned to the stage last week in celebration of its 40th anniversary, presenting six days of international dance live and livestreamed from the spectacular Robert F. Wagner park in lower Manhattan. The festival ran Aug. 12th through 20th and featured 56 total performances, including 16 dance films which opened the first three days of the festival online.

Dance films came from far and wide, including from Mexico, the Netherlands, Tanzania, and Vietnam. The festival prides itself on this global reach: Battery Dance, the festival’s host company led by founder Jonathan Hollander, is widely recognized for its award-winning Dancing to Connect program, a series of workshops that use dance to address social issues both domestically and abroad. The annual Battery Dance Festival brings the world to lower Manhattan: The 40th anniversary represented 14 different countries and perhaps the most diverse array of dance styles of any singular dance festival in the world. Where else can you find a same-sex Argentinian tango, a piece in the Brooklyn street style “Flexn,” a Lebanese voguer, and a South Korean group of lindy-hoppers, all on the same program?

The dance films’ settings remained as diverse as their dancers. Some danced in environments as vast as a south Australian mountaintop (Australian Dance Theatre’s The Circadian Cycle), others in those as intimate as a kitchen in India (Abhilash Ningappa’s Fall Back). Some films were simply videos of staged performances, including the remarkable Uninhabited Island, choreographed and performed by Jaewoo Jung, artistic director of Dance Troupe Braveman from South Korea.

Jung begins in a black suit with a white collared shirt on a black stage with a piano bench. In silence, he moves his hand—or maybe his hand moves him: It thrusts into his pocket, pulling him down to his knees and causing him to fall. Jung is nimble and dexterous, moving in and out of levels with ease, whether jumping in the air or tumbling over his shoulder. Apparently simple—it is a solo danced mostly in silence with house lighting and one prop—Uninhabited Island evokes a range of striking emotions. Comical at times, Jung uses the motif of the hand playfully, blowing into his thumb in order to inflate himself back up after a fall. In other moments, he is pitiful, facing the hand before him which evokes a mirror. In the most jarring and unexpected moment which concludes the first section, Jung faces the audience as his hand turns to make a gun, rises to his temple and fires. In coordination, he knocks over the piano bench to make a bang and falls to the ground as the lights flash dark. It is only here that you realize what kind of a hold Jung and his hand have had on you the whole time—you believe he has really been killed, and you are horrified.

The live portion of the festival brought an equally effective, though completely different, range of pieces. The opening days were thematically programmed, with Day One dedicated to Indian Independence Day, featuring Indian music and dance, and Day Two celebrating Young Voices in Dance, a new addition that highlighted young dancer/choreographers ages 15-22.

The latter part of the week brought some of the most outstanding performances. Luke Hickey’s tap trio to live jazz music on Aug. 17th, “A Little Old, A Little New,” was excellent in execution and entirely delightful. Hickey is a New York City-based tap dancer and choreographer from North Carolina, where he studied in the acclaimed North Carolina Youth Tap Ensemble (notable alumni include tap star Michelle Dorrance, with whom Hickey has performed). Hickey was joined by Dorrance Dance dancer Elizabeth Burke (who also studied with NCYTE) and John Manzari, a mentee of the legendary tap dancer Maurice Hines (brother of Gregory Hines) and whose credits include “42nd Street,” “Maurice Hines: Tappin’ Thru Life,” among many others. “A Little Old, A Little New,” which premiered in 2018 at the Birdland Jazz Club in New York City, allowed each dancer to shine in virtuosic rhythmic solos, as well as together. Whether in unison, in round, or riffing off of one another, the trio was extraordinarily tight with a marvelous swing. They were supple, and the movements looked easy despite the complexity of sound which resonated off of a strip of wood secured to the stage.

Other exceptional performances included two duets, one entitled “John 4:20” choreographed and performed by Baye & Asa, an African and hip hop-influenced contemporary duo, and the other “Deliver Us,” by contemporary choreographer Christian Warner. Each duet included intricate and energetic partnering with several breathtaking lifts. The performances were made all the more magical by the complementary backdrop of golden hour on the New York Harbour.

The Battery Dance company performed for the last four nights of the festival, presenting a work by two current company dancers and another by an alumna, as well as two acquired through cultural exchanges with South Africa and Romania.

The latter, choreographed by Romanian choreographer Ana Maria Lucaciu, concluded the festival on Aug. 20th. Set to an original score by T.M. Rives, the piece explores human interaction, the subconscious, and time. It begins with a lone tree set downstage left which lights up as a deep voice seemingly speaks through it, introducing the piece, then ironically narrating the sometimes light and jazzy, sometimes earnest and contemplative movement of the dancers. “How did she get here?” he interjects, admitting distraction. Then, “Now I am completely absorbed,” expressing a better awareness of the dancers on stage. The narration is relatable, as naturally, our minds are rarely devoted to one subject at a time. Despite this tendency, the narrator encourages us to really pay attention, to “notice the details.” As he says in the beginning, reflecting the title of the piece: “It Goes by Quick.”

This was good advice for the viewer of a packed, two-week dance festival, which (as with any festival) can be overwhelming and without sincere attention risks becoming a field for mind-wandering. As the tree reminds us, it’s only natural. However, even when our minds do wander, there are certain arresting moments that jolt us back into focus: like when an elderly Israeli man pressed face-front against a graffitied wall reaches for something unattainable (dance film Free Pita & Nilydna); a woman is gently lifted and carried from her wheelchair by a fellow dancer (Dancing Wheels’ Od:yssey); or when a man seemingly floats, spun in the air by a partner as sailboats glide by and the sun sets behind them on the water (Warner’s “Deliver Us”). Whether virtually or in the park, with the Statue of Liberty shining steadfastly in the distance, Battery Dance Festival gave its audience the world, a reason to celebrate it and to pay attention.

Previous
The Rise of Frances Rings