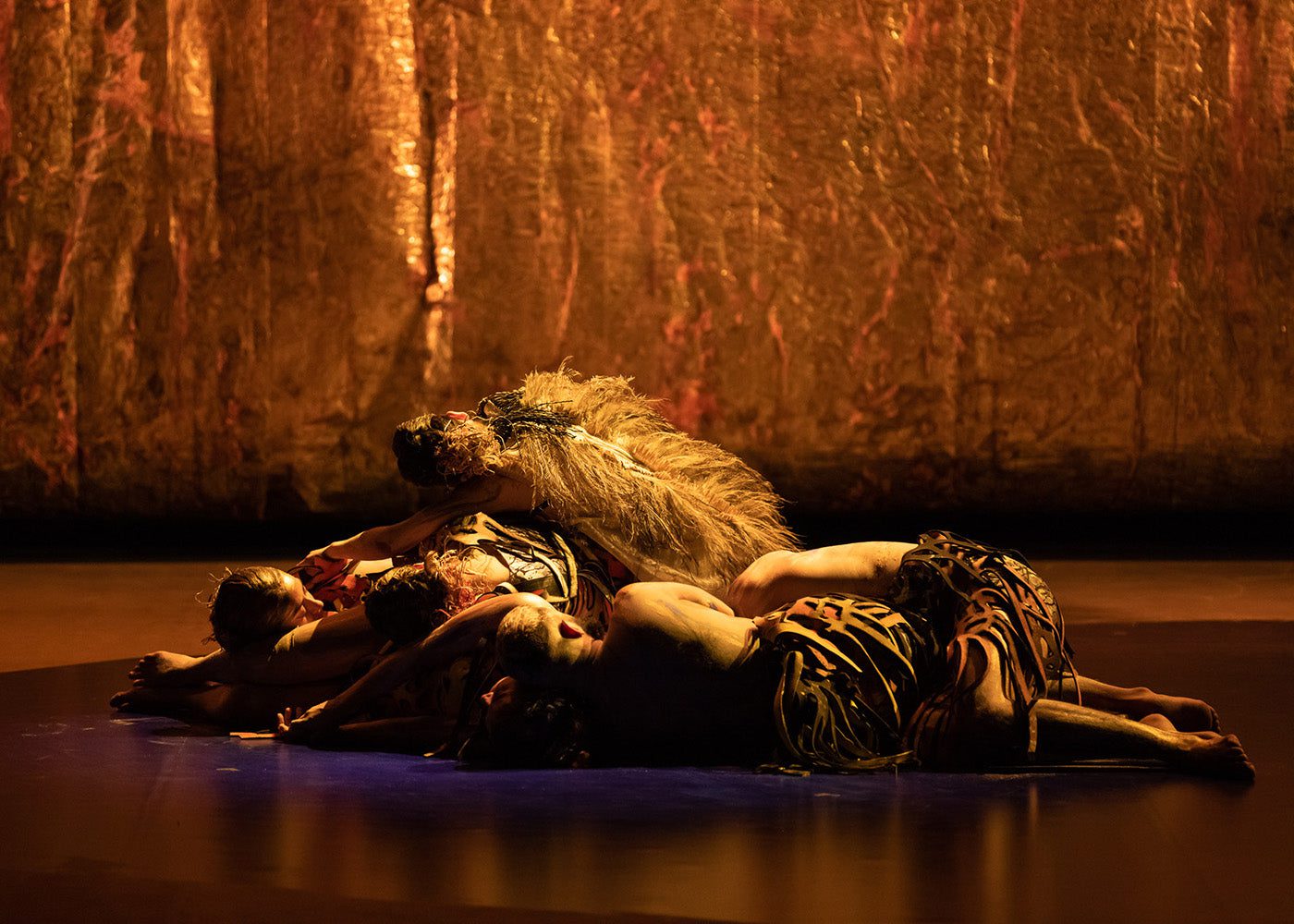 Stories from the Great Sandy Desert

Astoundingly impactful, Bangarra’s “SandSong: Stories from the Great Sandy Desert” is a work that needs to be seen by all Australians.

Warning: Aboriginal and Torres Strait Islander readers are advised that this review contains the name of someone who has passed. Please pause now if you’d prefer not to read their name. The family of Ningali Lawford-Wolf has given the media permission to use her name.

Bangarra’s “SandSong: Stories from the Great Sandy Desert” has had a huge journey to the stage. The brainchild of the late Australian activist and actress Ningali Lawford-Wolf (Rabbit Proof Fence and Last Cab To Darwin), she was a Wangkatjungka woman, born in a very remote part of Western Australia known as the Kimberleys. Her birth place a far cry from the silver screen, she dreamt of bringing the stories of her beginnings to the stage. But just three weeks after she met with Bangarra’s Artistic Director Stephen Page the collaboration took an untimely turn. Lawford-Wolf passed away unexpectedly while at the 2019 Edinburgh Festival. However, the seed of inspiration had been planted. Stephen Page and Associate Artistic Director Frances Rings’ worked tirelessly to keep her dream alive. They visited the remote region on various occasions with the company dancers, meeting with communities, learning traditions, ceremonies and dances. Lawford-Wolf’s siblings, Eva Nargoodah and Putuparri Tom Lawford came on board as Cultural Consultants. Even a year of Covid and lockdowns could not keep the work at bay. The result, in 2021, is an astounding tribute, and with it, Bangarra’s first mainstage work in three years and their first time back on stage since late 2019.

The opening packs a punch—loud static white lights flicker, while historical excerpts ring out, the sound of chains and news reports on Aboriginal deaths in custody.

As the lights lift, a shimmering gold backdrop hangs from the ceiling, textured and weathered, it elicits thoughts of the big reds and golds of Australia’s Great Sandy Desert. The work is loosely divided into four acts which blend together to form one 80-minute work. The first act is makurra, the “cold dry season.” Set before invasion, the choreography explores traditional life, ceremonies, women’s business and life in the desert. The women enter the stage, moving closely together. The men dance separately. Stephen Page and Frances Rings’ choreography is clever and purposeful. Soft feet grip the ground, arms and backs bend and flow, showing a closeness to the land despite the cold.

The work then moves to parranga, the “hot dry season.” The colours change, and the choreography intensifies. Here, the Bangarra men are on display, with smoking spinifex strapped to their bodies, they shake and show the prowess of the Kimberley men, the women weave and dance enveloped in baskets.

The third act, kartiya, “white person” is the most confronting to watch. The desert communities are forced into cattle stations and labour. At one point the dancers cluster together, their arms jerking from side to side, up and down, their feet rooted to the spot. In the background  an auctioneer’s voice calls a frantic auction. At the front of the stage three men stand draped in chains, bending, pushing, willing to be freed. It is chilling to witness. Themes of displacement, slavery and deep cultural loss come to mind. As the Act ends, Lilian Banks and Rikki Mason take to the stage in suspended harnesses performing aerial choreography amongst the company ensemble. It signals the rise of their voices. It is some of the most daring choreography I have seen, and as the Act closes, there is not a sound in the theatre.

Act four brings sadness but also hope and healing, yitilal, the “wet season”. The act starts with dancer Baden Hitchcock sitting on the stage, a solitary broken figure in the desert. His stooped body and movements suggest the weight of intergenerational trauma, and hints at alcoholism and the toll of mental health suffered by so many. But then we see healing. Rika Hamaguchi enters the stage to bathe and cleanse Hitchcock. The choreography is nurturing and serene, signalling a return to family and culture. Hamaguchi’s intense eyes combined with ethereal movement is entirely captivating.

Throughout the entire performance the close knit team of Jacob Nash on set, Jennifer Irwin on costumes with Steve Francis as composer is evident. It is perhaps Irwin’s greatest display to date, with dozens of costume changes evoking life on the land with intricate detail. Steve Francis has also produced a vivid score, filled with history, emotion and the voices of elders. Combined with Nick Schlieper’s lighting design and David Bergmanhe’s audio visuals, the desert comes alive.

It’s hard to convey the power of Bangarra in “SandSong.” Visually, historically, choreographically, and emotionally this work conveys the Kimberleys like no other medium can. While not always interpretable in a strictly narrative sense, there is a wonderful submission required by the audience to fully absorb this work, and that is part of its beauty. The amount of care and research that has clearly been taken to bring this remote part of Australia to life is evident. At a time when Australia’s wounds of the past still require much healing, this is a work should be seen by all Australians.

“SandSong” performs at the Sydney Opera House until July 8, 2021, then tours nationally to Canberra, Bendigo, Brisbane, Melbourne throughout July-September 2021.

Next
Prelude to Anarchy