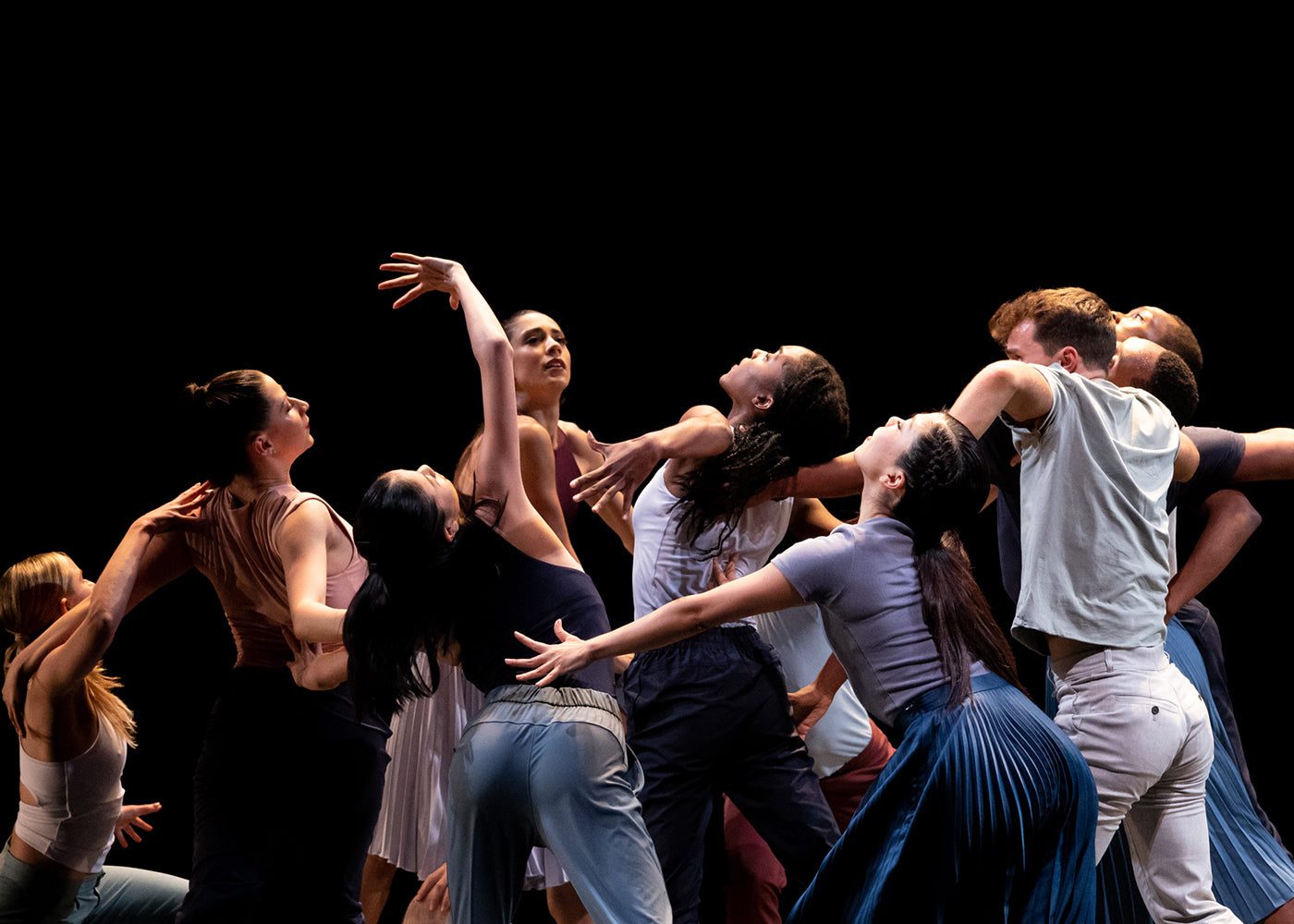 A provocative Fall Series from BalletX

Although audience members shivered in the first cold night as they entered one of Philadelphia’s finest downtown performance palaces, the Wilma Theater, Ballet X offered them a program of warm memories, thoughtful reflections and a touch of nostalgia on November 30.

Billed as a world premiere, Caili Quan’s “Love Letter” opened the company’s short fall run. A former BAX dancer, Quan’s piece’s seminal moment budded with gorgeous cinematography by Elliot deBruyn and Nathaniel Brown during the first pandemic summer in 2020. From beach scenes and the rooves of buildings, it’s bloomed onto the stage where the dancers can return to touching each other in leaping lifts and sweeping embraces. Quan separates the ten dancers into small groups, little dance tanks of duos, trios or quads, before clustering them closer like bouquets.

Christine Darch costumed them barefoot in casual beachtown togs—bare midriffs, shorts, sarong-like wraps. Songs by the Tahitian Choir dip into Quan’s South Pacific/Guam heritage, (although I don’t know why Harry Belafonte’s Caribbean songs belong on the other side of the continent. Maybe Calypso music was popular with American naval personnel based on what is still a United States colony?) Nonetheless, Belafonte’s lilting voice and drum rhythms fit the choreography very well.

Francesca Forcella began advancing toward the fourth wall like a sea goddess. Torsos rolled like the waves we hear crashing ashore. Dancers stomp in squats on all fours, rushing offstage like sea creatures evolving from ocean to land. Solos and groupings with Shawn Cusseaux, Savannah Green, Ashley Simpson et al, exceeded this company’s usual technical chops. Simpson’s fierce Bad Street Boy walk would make me turn and run the other way. And one of the company’s several new additions, Jonathan Montepara brought a fresh sense of rebirth to the stage with his smile and full-chested joy. In Guamanian or Chammoro cosmology, Mo’na means a circular concept of history and Quan has her dancers loosely form a circle at the end. But I wish she could have brought even more imagery of her homeland to her love letters.

A deeper and more thoughtful meditation on the distances and losses we’ve all been through, the world premiere of “Sacred Impermanence” by Darrell Grand Moultrie was a more sober follow up. In Cusseaux’s solo after the opening movements, he lies prone in silence, his head toward the audience, sensually entwining his limbs and torso, evoking both a sense of pleasure and dread.

There were many similar moments of ambiguity and outright drama. As when Cusseaux rises to snakily dance, Francesca Forcella emerges menacingly from the wings, pointe shoe aimed high and arrow-like at him. Hands up, he scurries backwards offstage. The other dancers, Andrea Yorita, Ben Schwartz, Green, and Simpson plinked sideways in steps that match the piano fingerings of the music. All wore soft ballet slippers that muffled their landings and furthered the optical illusions created by Mark Eric’s gossamer costumes. They caught the light and sometimes the dancers seemed to disappear, furthering Moultrie’s concept of impermanence.

The most challenging, yet engaging, piece on the program, Moultrie’s musical choices at first baffled me. From the sinister piano dynamics of Prokofiev’s Toccata in D Minor, it moves through Clara & Robert Schumann’s near-erotic arpeggiations of the Andante Molto that begins the Three Romances for Violin and Piano. Cusseaux’s silent solos connect these to the German composer Dirk Maassen’s meditative pianissimo of his La Mer and finally and most surprisingly, to Bill Evans ethereal piano Peace Piece. What a brilliant global and temporal musical journey to underpin this dance. Michael Korsch lit the dancers moodily as they lay down, heads toward the audience. Are they lying in sickness, death, grief or exhaustion? It seems a dance about the unrest of an individual—personified by Cusseaux—among others who were unreceptive, even hostile.

The Philadelphia premiere of Justin Peck’s “Become a Mountain” is a white sneaker/bobbysox ballet that immediately brought to mind the late Sally Banes book, Terpsichore in Sneakers and works by Jerome Robbins. Not surprising, since Peck, the Tony Award-winning choreographer of Steven Spielberg’s West Side Story, had to follow in the shadow of Robbins’ timeless original “West Side” choreography.

The company’s ten dancers swelled to twelve with the addition of dance fellows Eli Alford and Demetrious Reed. Dancers variously wore pleated skirts and joggers by Benjamin Burton. Peck created it for Juilliard’s senior dance class in partnership with an athletic shoe company, hence the youthful innocence and playfulness of the work. They sell the dance to us, giving the piece a retro Broadway, even Lindy-hop look throughout. Peck titled this work after American composer, Dan Deacon’s piano-loaded track from 2020. I discerned echoes of Steve Reich and even, briefly, a Philip Glass-style glissando or two. Korsch recreated Nicole Pearce’s original lighting for the Wilma stage, brightening and dimming to fit the various moods of the vivid dancing. The music had a feel of overdone rock and roll exuberance, but overall, the piece was a joy to watch and hear.

Recent BalletX programs have been on the bland side, not very daring. This program offered far more provocative material for the company to perform and for the audience to mull over on the way home.

Next
Elvis Sighting at the Joyce