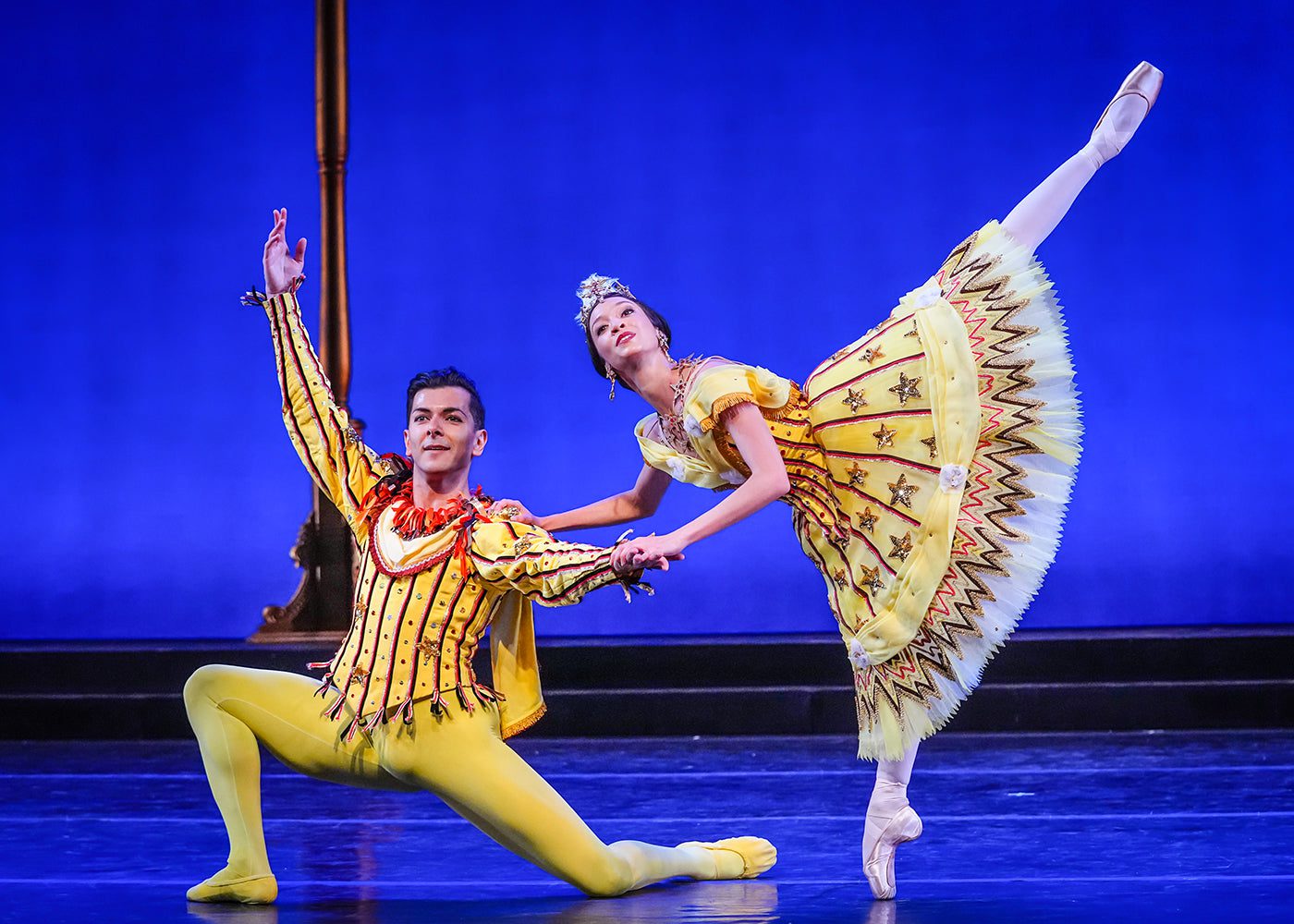 In summarizing Sir Frederick Ashton’s oeuvre in 1961, celebrated critic Clive Barnes writes, “For all this his ballets are best seen from above.” In Covent Garden, Barnes continues, his favorite seat from which to view Ashton’s work is “from gallery right at the top of the house.” Although New York City audiences had the chance to catch a rare glimpse of Ashton’s choreography last week, thanks to Sarasota Ballet, the venue—the Joyce Theater—lacked the depth and perspective to really do his ballets justice. With its unadulterated sight lines, the intimacy of the Joyce is usually a joy for viewers. But when it comes to bejeweled costumes, intricate formations, and complex footwork, a little bit more space between the audience and performers (and the performers themselves, who often seemed at risk of tour jeté-ing into one another) might have helped to smooth out the kinks, and bring the entirety of Ashton’s vision to life.

Since taking the helm of Sarasota Ballet in 2007, director Iain Webb has revamped the Florida company to breathe new air into Ashton’s repertoire. The triple bill, which ran at the Joyce from August 16-21, featured two works by the British master—“Birthday Offering” and “Varii Capricci”—alongside a world premiere by contemporary ballet choreographer Jessica Lang titled “Shades of Spring.” The program opened with “Birthday Offering,” created by Ashton in 1956 to celebrate the Sadler’s Wells Ballet’s 25th anniversary and transformation into the company we know today: The Royal Ballet. Ashton choreographed the ballet as an ode to Russian grandeur in honor of the company’s founder, Dame Ninette de Valois. This is more than evident in Alexander Glazunov’s lyrical compositions arranged by Robert Irving, the golden candelabras standing guard upstage, and the series of demanding female solos evoking the fairy variations in “Sleeping Beauty.” The lavish detail of the dancers’ costumes—sparkly star-shaped necklaces and tufted headpieces for the women, and short capes for the men—are just the cherry on top.

Ashton’s choreography has a true sense of idiosyncrasy about it. The variations and the grand pas de deux that follows are full of quick directional changes, phrases that end in arabesque balances, and intricate footwork seemingly designed solely to challenge the dancers tasked with tackling it onstage. While some of the soloists struggled to rise to the occasion, lacking crispness in their transitions and lagging just behind the music, “Birthday Offering’s” principal ballerina Macarena Giménez charmed with command and ease. Giménez joined the company from Ballet Estable del Teatro Colón at the start of the season. And with her liquid port de bras and suspended balances, this newcomer is sure to act as a bright light in Sarasota Ballet’s future.

Set to piano trios by Joseph Haydn, Lang’s “Shades of Spring” is aptly named. The piece is set in front of an evolving projected film backdrop designed by Roxane Revon of plants floating in vases of water. And although the sections featuring white roses can feel overly saccharine, those that showcase just the plants’ roots are beautifully meditative. The idea of roots becomes a throughline in the ballet: The superb Marijana Dominis, who plays a starring role throughout, is dressed in a white practice tutu and legwarmers. At first her movement vocabulary feels quite classical, but it becomes increasingly contemporary as she interacts with her more adventurous peers. Perhaps Dominis represents the roots of the form, and the many directions in which it can grow.

Lang’s program notes stress that the piece was created in partnership with the dancers, and indeed the cast of seven seem in full command, swirling around each other in six unique sections. Standouts include Arcadian Broad and Yuki Nonaka, two highflying powerhouses who have the chance to show off their full stable of in-air tricks. “Shades of Spring” is largely cohesive, though a reflective ramp in the upper corner of the stage provides an unnecessary distraction; the dancers sprawl on it languidly, drawing from the partnering at play in the foreground.

The program closed with Ashton’s “Varii Capricci.” The piece, which the Royal Ballet premiered in 1983 at New York’s Metropolitan Opera House, is a dramatic romp, a parody of a story ballet telling the tale of a martini-drinking party hostess seduced by a dark sunglasses-wearing gigolo. The ballet, set to music by Sir William Walton, is in vignettes, alternating between the party guests and the sultry couple, danced by principals Danielle Brown and Ricardo Rhodes. Ashton’s quirks are back on display: In one memorable moment, the statuesque duo intertwines their flexed hands while balancing in an attitude to the side with a bent standing leg. “Varii Capricci” certainly aims at lighthearted fun, but the acting is inconsistent, at times too subtle to read and at others garishly exaggerated. Yet it’s wonderful to see a company paying homage to an underrepresented chapter of ballet’s past, working hard to keep Ashton’s legacy alive in the U.S. while all the while growing into the future.

Previous
Under a Painted Sky