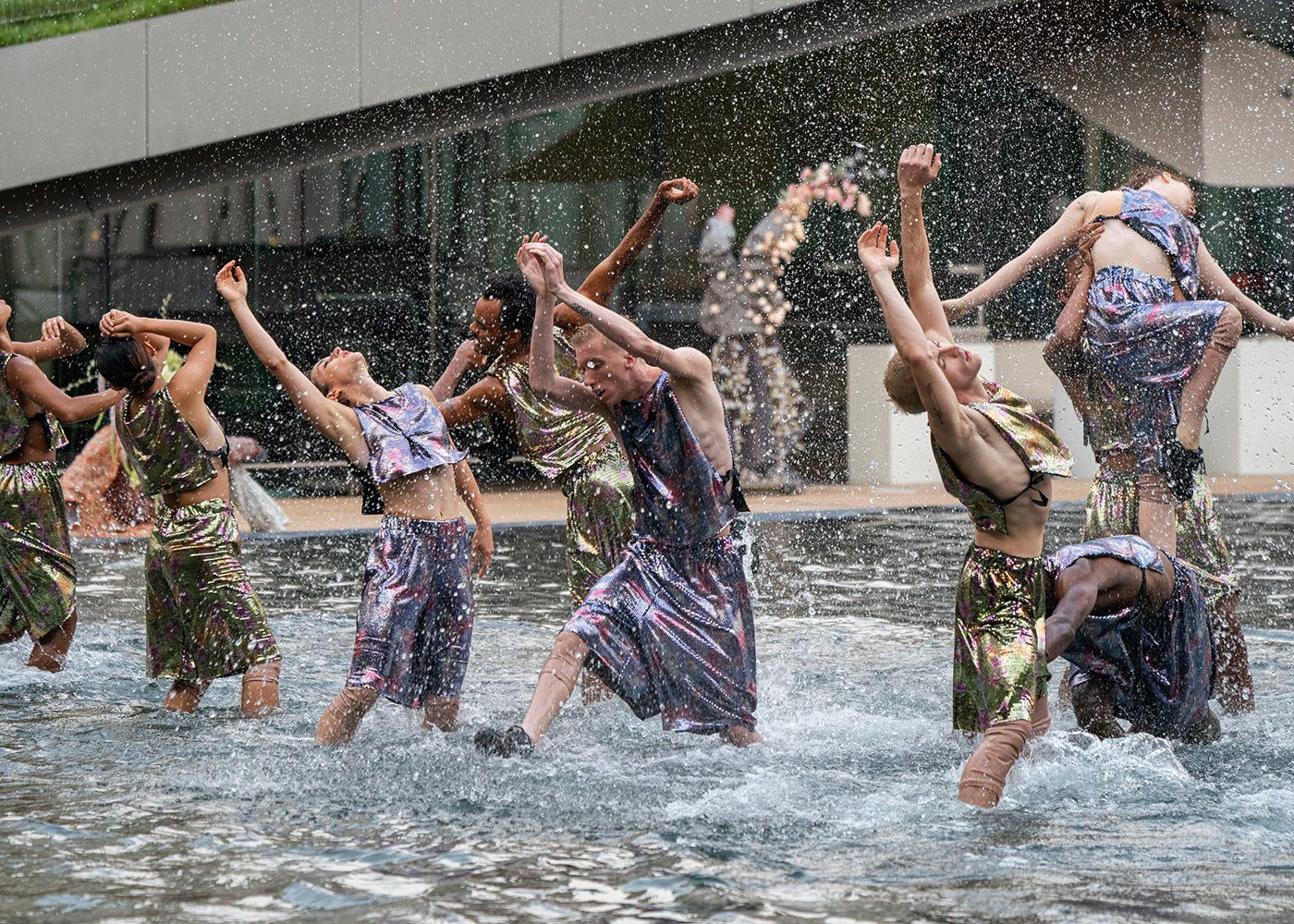 As I walked in the blazing early evening sun to the subway this past Monday evening, I wondered how the performers of Andrea Miller’s “You Are Here” would fare in such heat. As if to immediately put my mind to rest, the show began with instant catharsis as the dancers plunged into the large rectangular pool upon entering Lincoln Center’s Hearst Plaza. In unison, they stomped and hopped their way through the water, clasping their own hands together, arms slashing to a driving beat. The steps had a folk dance feel, and their motions felt intentional, grounded, almost sacred. A palpable relief was on display, and I couldn’t help but feel gratitude for this moment of respite, however brief, after over a year of feeling unmoored by all of the uncertainties and anxieties and grief. To see dancers moving with one another, unmasked and touching, shimmering in metallic costumes in water, for an audience—so many boxes of delight were checked in that opening section.

Under a setting sun, no less. Perhaps one of the biggest delights that we have found as of late—as humans learning to live with an ongoing pandemic—is how to enjoy more things outdoors. Miller and co-director Lynsey Peisinger’s use of Hearst Plaza as a theater in the round was as profound as it was playful. Elijah Schreiner, a lighting designer and technical theater teacher at Fiorello H. LaGuardia High School, stage-managed nature, performers, and set pieces alike with phrases such as, “stand by clouds.” Incorporating sculpture by Mimi Lien and a sound installation from Justin Hicks, that included audio portraits from 14 Lincoln Center constituents and 11 community participants from across New York City, this multi-faceted production was too ambitious to fit under any roof.

As part of the audio portrait process, the creative team came up with a set of questions for the subjects so that they might speak to the “consciousness of presence;” to honor their embodied moments and through them, potentially process both the gratitude and grief of this time. “Stand by band, band go,” took our attention off to the side of the pool to where musician Hahn Dae Soo of the Korean Cultural Center New York, and his three piece band, were placed to weave in Soo’s audio portrait through song. Then the dancers returned to the pool for Cassie Mey’s portrait. Mey, who works as a dance oral history archivist at the New York Library for the Performing Arts and is also credited with choreographing her own performance, moved fluidly through the pool as if on a journey, her live vocalization (of Joy Harjo’s poem “It’s Raining in Honolulu”) mixed with recorded clips from her audio portrait. The effect of the performer listening to their own recorded audio along with us was incredibly intimate.

The show continued with this organic weaving of audio portraits into the fabric of the dance. Sometimes the dancers movements read as part of the larger landscape, as was the case during Mey’s portrait and later with Ryan Opalanietet of the Eagle Project, as he educated the audience with a land acknowledgment that addressed sustainability and an original Lenape composition from Urie Ridgeway. This section ended with the group tapping their hands against their chests in a gesture of beating hearts, in a perfect presage of the portrait to come. Other times, the dancers were a supportive chorus: acting as back up for Schreiner’s portrait, which began with his fear of death while battling Covid-19, touched on the experience of being transgender, and ended with how much he loves to dance with his wife (at which point said wife came dashing through the pool to have said dance—another delight). Perhaps most powerfully, the dancers followed Valarie Wong as she ran laps around the pool, continuously rotating to face her difficult testimony of the early days battling the coronavirus as an ICU nurse at New York Presbyterian hospital. Wong’s portrait was so emotionally intense, particularly when she discussed her rituals for when patients die, it brought Lien’s sculptures to life—human-like forms scattered along the pool and plaza, made of stiffened clothes seemingly caught mid-stride, shirt arms flung, dresses and jackets draped over invisible heads, with dried flowers and cornstalks growing where flesh might once have been—and had me evaluating their memorial impact every time she dashed by one of them.

In two cases, a solo dancer was the “I” in the first person account we were hearing: when Taylor Stanley donned a baseball cap and began reminiscing about seeing George Balanchine’s “Jewels” for the first time, traveling the length of the pool edge in a sort of barefoot meditation (choreographed by him) that mixed preparations for pirouettes left unturned with various ways of crawling and bourees. Later Jermaine Greaves of Lincoln Center Accessibility used his wheelchair to carve through space and time while delivering a triumphant and rousing speech.

Throughout the ensemble dances, the artists of Gallim—Lauryn Hayes, Christopher Kinsey, Nouhoum Koita, Misa Lucyshyn, Gary Reagan, Connor Speetjens, Taylor Stanley, Haley Sung, Georgia Usborne, and Amadi Washington—were incredibly present, highly attuned to each other in their unison movements and partnering, and one with their environment, moving seamlessly with an amphibian confidence between land and water. There were so many sublime moments: traveling tableaux where every backbend was made more dreamy as heads dipped into water; a duet with two women in which sprays of water extended every gorgeous line; and in one magical sequence, a dancer floated forward on air above the pool, traveling through the hands of her cast mates. And of course, ending with a silly and fun splash party to Whitney Houston’s “I Wanna Dance with Somebody (Who Loves Me)” was a diffusion of joy and a welcome note to end on after 75 minutes exploring weighty themes.

“You Are Here” was ultimately a much-needed dance celebration and an earnest attempt at radical inclusivity. Most of it felt organic and necessary, though it must have been meticulously sketched out by Miller and Peisinger with an intersectional lens to make sure so many identifications were represented, such a diversity of reflections heard. The work also felt like an urgent call to be in community. Now. And there we were; witnesses to its full-throated maximalism, exhorting the bodies and voices of a rich mix of necessary arts and culture and essential workers. It was indeed a wonderful place to be.