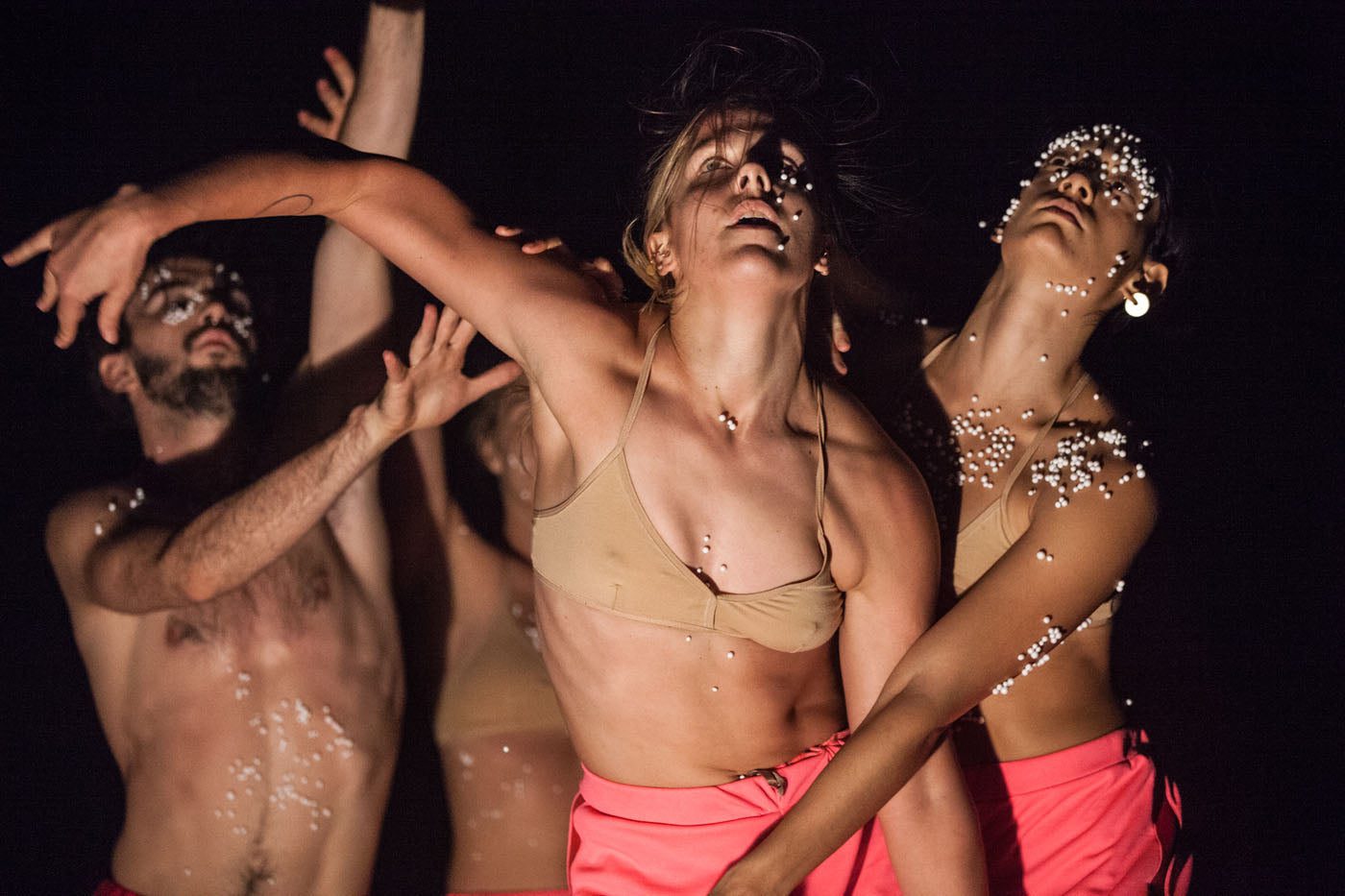 If Cold Was Real.

If Dance Was Everything.

If Promise Was Lure.

If Bait Was Laid.

If I Was Keen.

On a dark night, I ventured to the Substation in Newport to see two new works choreographed by Ross McCormack (New Zealand) and Stephanie Lake (Australia). When last in the yawning space of the machine hall, it was summer. This time, gloved and wrapped, my curiosity was equally piqued. Lured by the promise of a tumble “down the rabbit hole of imagination,”1 the premise of two pieces created independently and in response to word play held terrific appeal. A grammatical exercise of ‘fill in the blanks’ had been laid at the feet of McCormack and Lake, and I was keen to see how they had picked it up and run with it.2

Rabbit holes can be so easily missed; count me in, you bet.

If Challenge Was Accepted.

If Offer Was Reconstructed.

If Curtailment Was Opposite.

If Restriction Was Freedom.

Presented by Dancenorth’s artistic director, Kyle Page, with a set of boundaries to work within, McCormack and Lake, each chose “sound from the one sound score, create[d] costumes from one pattern, utilise[d] lighting from one design and work[ed] to a set duration.”3 As with all art, limiting one’s means can (and does) produce clarity of vision. A restricted palette can (and does) direct one’s focus. With the links to tie the works in this double bill in place, cohesion was also found. Moreover, what could have been a case of great-concept-shame-about-the-result proved false.

If Darkness Was Paramount.

If I Was Forgotten.

If Single Was Plural.

If Sound Was Felt.

If Vibration Was Deep.

Having suitably begun its world premiere in Dancenorth’s Townsville base earlier in the month, “If__ Was__” had dug through Queensland (Mackay Entertainment Centre, Proserpine Entertainment Centre, Judith Wright Centre) to reach one of Melbourne’s former railway power stations, built in 1915. In the blackened space, a temporary theatre had been constructed for the show’s duration, a conduit for an altogether different kind of power. The dark drapes masked any views or sense of the outside world and drew the focus to the assembled figures in quasi-worship around the amplifiers placed centre stage. For McCormack’s “If Form Was Shifted,” the body is always “at odds with its purpose. . . . grappling with its complexities and placement,”4 cloaked in the loud soundscape of Robin Fox. The score appeared to reverberate through those amassed both onstage and in the bleachers, swallowing the singular and making us one: if sound was unity.

If Dislocation Was Possible.

If Disassociation Was Constant.

If Division Was Foreign.

If Form Was Linked.

If Solidarity Was It.

Harrison Hall, Mason Kelly, Jenni Large, Ashley McLellan, and Georgia Rudd are the forms McCormack “unnaturally manipulate[d]” and rendered “somehow spectacular yet also pathetic.”5 Kelly’s broken-limbed opening sequence morphed to include McLellan, who proved the master at contorted facial manipulation. Tortured shapes took root and appeared to strangle any sense of fluidity, leaving newly robotic husks of what was. A dystopian nightmare naturally must lead to . . .

If Beauty Was Absent.

If Beauty Was Found.

If Movement Was Jagged.

If Fluidity Was Minimal.

If Regeneration Was Possible.

Lake, naturally, packed the gaps differently and returned them as “If Never Was Now.” Her own “hybrid creatures. . . . continually transmuting and being affected by their rapidly changing conditions” appeared better equipped for “survival, symbiosis and growth.” The landscape remained alien and hostile in part, and the movements, in pleasing parallel to McCormack’s, were still largely angular, but Lake showed her ‘creatures’ to be in possession of a much-needed “desperate forward momentum.”6 They were no longer corroded on the inside, but clawing their way back to humanity.

If Form Was Repeated.

If Many Was One.

If Cohesion Was Strength.

If Nature Was Beginning.

If Nature Was Heard.

Beautiful patterning that replicated nature took form and was repeated. However, unexpectedly, the suggestion of nature was inferred less in the costuming and materials and more in the movements of the dancers and a world’s worth of beanbag stuffing. This reclaimed nature was not easily found for the artifice, but it was felt. It was in the inquisitive bird-like, feet-together pitter-patter shuffle of Hall in a tinkling-light duet with McLellan. It was in the swirl of uncontrollable beanbag stuffing on the black flooring that simultaneously recalled ocean waves, a desert, and a dusting of snow. Also unfixed to one reading, the large panels employed by the dancers to move and momentarily control the tiny white beads, called to mind delicate fans, the personification of Wind on the pages of an old atlas when the world was (believed) flat, and a line of police with riot shields. And joined to this unnatural-natural sensation, the uncomfortable loud screeching sound of small polystyrene beads underfoot. When later adhered to the skin by static electricity, the dancers appeared all the more a part of nature as brutal as it was transfixing. Covered and branded by a manufactured pollen, five lurid pink birds of paradise, blown off evolutionary course.

If Evolution Was Key.

If Mimicry Was Survival.

If Mimicry Was Absence.

In Lake’s hands, mimicry was strength, where in McCormack’s, it was a weakness that devoured. Two sides of the one coin, spun.

Next
Lines for Winter