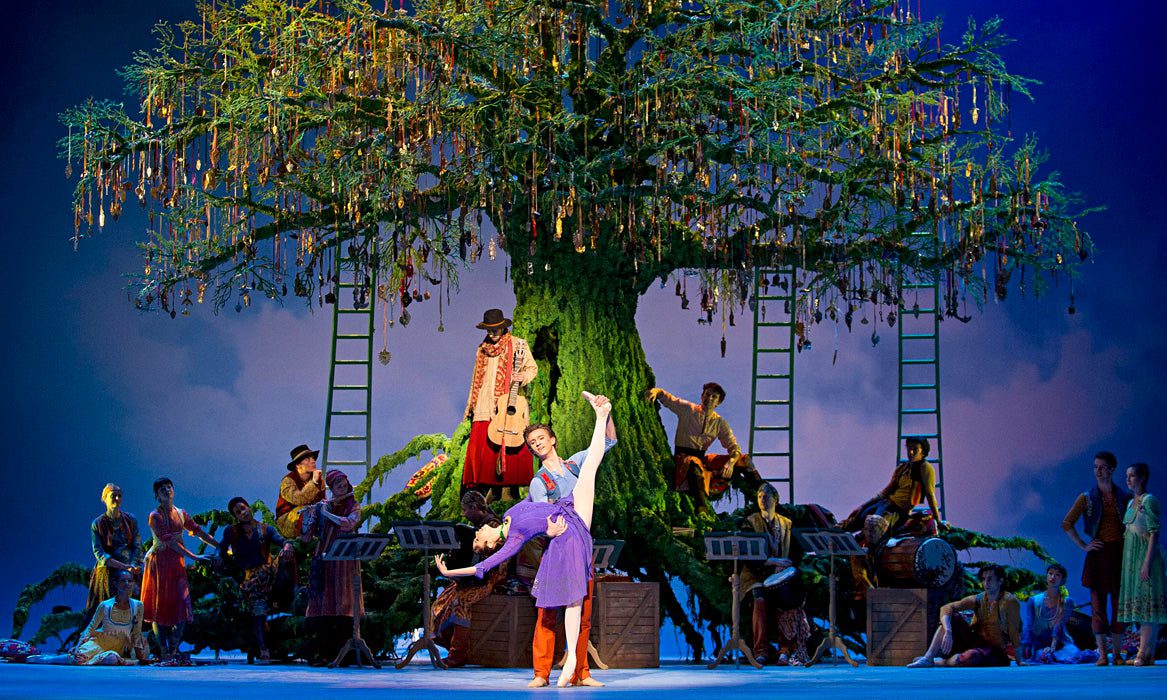 The Royal Ballet's “The Winter's Tale” broadcast in HD

I can still recall the intrigue I experienced when a trailer I saw at the cinema last autumn turned out to be an advertisement for a live screening of the Royal Ballet’s “The Nutcracker.” The prospect of attending the beloved Christmas production remotely—that is, viewing it from seats other than the velvety crimson ones of the Royal Opera House—was, and is, a fascinating compromise indeed. Unlike TV relays or DVD viewings, customary alternatives for catching the troupe’s performances, a live screening has the distinct selling point of preserving, in real time no less, the crucial “out” portion of a night out at the ballet.

There’s no denying the popularity of this programme: the aforementioned “Nutcracker” broadcast went on to achieve some 129,000 viewers, rendering it the most successful screening of its kind to date, and according to company forecasts, the forthcoming 2014/15 season will see the number of remote viewers eclipse that of live attendees for the first time. Still, the question of quality remains—put simply, how well does a silver screen facsimile hold up against a traditional in-the-flesh viewing? A few days after attending a press performance of “The Winter’s Tale,” Christopher Wheeldon’s latest production for the Royal Ballet, I went to a live streaming of the show at my neighbourhood cinema to find out how the two compare. The latter experience, it turns out, has some discernible shortcomings, but overall I found it a satisfying, not to mention affordable, option for catching the distinguished company in action. (Note that’s “option,” not “replacement.” More on this later.)

“The Winter’s Tale” broadcast commenced with real-time footage of a packed audience taking their seats, a touch I suspect is intended to align movie-goers with their Opera House counterparts but in fact went a not inconsiderable way in highlighting our segregation: while they schmoozed and clinked glasses under the amber auditorium lights, my fellow attendees and I sat quietly in semi-darkness, unsure of whether the cinema’s implicit no-talking mandate applied on this occasion. A collective decision from our end to decline joining in on the opening applause further underscored our removal, though at this point the camera thankfully abandoned its fly-on-the-wall approach, cutting to a special introduction by Darcey Bussell and quelling my initial impression that we were tuning in via a spycam affixed to the back wall.

From here the experience proved considerably more immersive, thanks in large part to a stream of supplementary programming that acknowledged and capitalised on rather than denied our extrication as remote viewers. Slick pre-recorded videos punctuated with rehearsal footage and commentary from the dancers preceded each of the three acts, offering illuminating background information on the production’s conception, themes and score. Meanwhile, a handful of live interviews with the ballet’s creative team—stilted though they were—served to satisfy the promise of backstage access and fill the obligatory intervals between each act. (As you can imagine, loitering near an Odeon snack bar for 20 minutes doesn’t hold quite the same allure as swanning around the glinting Paul Hamlyn Hall.)

Of course, it’s the footage of the ballet itself I’d wager is most important to viewers, and on this front a live cinema stream boasts some undeniable advantages. In “The Winter’s Tale,” which stars two couples, the high-definition, close-up camera shots went a long way in highlighting the intimacy between each pair, magnifying the contorted faces and accusatory gestures anticipating Hermione’s collapse in the dramatic first act, as well as the tender sighs and gentle kisses young lovers Perdita and Florizel exchange in the pastoral second one. The libretto’s violence too was enhanced: up close jealous Leontes’ (danced by Edward Watson, the Royal Ballet’s resident tragedian) condemnation of his wife teemed with a brutal vehemence not readily visible from the stalls, where I spent my first viewing.

The zoom of the camera proved equally rewarding on the choreography front, particularly since this ballet features six principal roles. Wheeldon’s intricate footwork, studded as it is with flexed feet and complex petit allegro, begs for attention, and the filming gladly obliges, treating us to intimate shots of Lauren Cuthbertson’s preternatural turnout and Sarah Lamb’s supple arches. Likewise, the beautifully detailed costuming benefited from some well-deserved attention. I left the press performance unaware that Perdita’s May Day frock was anything more than a simple purple dress, but an up-close view revealed delicate buttoning and intricate floral embroidery.

At the same time, the camerawork had the inadvertent effect of drawing attention to customarily imperceptible elements—the heavy breathing and rivulets of sweat afflicting the ballerinas, for example, the accentuation of which ironically belied the very signs of exertion they were no doubt going to extreme lengths to conceal. Likewise, I found the indiscriminate lens compromised the lustrous veneer of Bob Crowley’s magical stage design, exposing the grainy pixels of the impressionistic digital backdrop and accidentally capturing the odd prop handler.

Moreover, the camera neglected as many details as it highlighted, particularly with respect to the staging. The principal action by and large took precedent over the broader picture, often at the expense of Wheeldon’s lovingly crafted peripheral details. The failure to capture a comprehensive view of the bustling second act, a bucolic, folksy scene designed to showcase the corps, was especially unfortunate considering the divertissements dotting the fringe are among the ballet’s best.

Broadly speaking it seems fully appreciating a live ballet screening requires recognising it as a concession to the real deal, not a substitute for it. While some of the drawbacks outlined above likely pose less of a liability in smaller, simpler productions than “The Winter’s Tale,” certain compromises remain regardless. It’s worth bearing in mind you’re at the mercy of a technical operation that, while advanced to be sure, is hardly perfect—our screen went black at several unexpected points, including the pivotal moment in which Perdita is reunited with her parents, and a glance at the ROH message board for the performance reveals a slew of complaints from customers abroad regarding faulty sound and transmission. Still, the egalitarian nature of such broadcasting largely redeems its missteps in my opinion. Though its primary objective is almost certainly profitability, the Royal Opera House’s programme nevertheless takes steps towards increasing accessibility to a historically elite art form, a progressive endeavour by any account. A little technical improvement and the venture could go even further.

Next
Mouth to Mouth