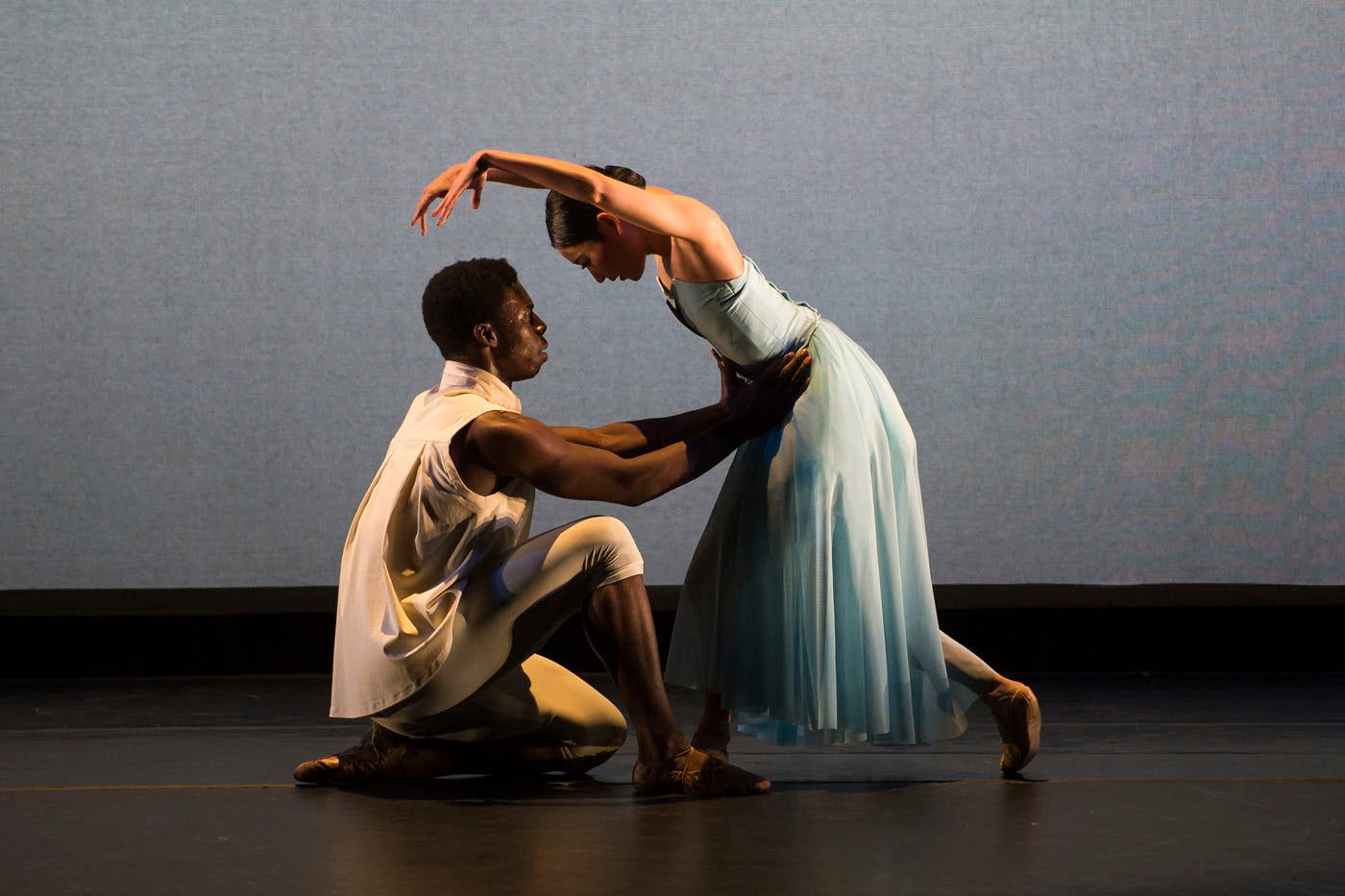 Three premieres at the Washington Ballet

All three choreographers show promise, delivering a handful of sublime moments but unfortunately conveying an overall sense of “meh.”

The problem was twofold: the difficulty of aligning a choreographer’s goals with their chosen music, and a lack of innovative movement. No choreographer offered lifts/turns/combinations that made a viewer’s cerebral strobe light flash. Ideally, neurons should signaling, “Pay attention! This is something you’ve never seen before!”

Sitting in the audience, watching the Washington Ballet perform on March 18, I couldn’t help but think of a far superior trio of performances I’d seen just a week before, when the Boston Ballet presented a powerhouse trio of newish ballets. Yes, innovative and insightful music, costume and lighting choices help, but no matter how cleverly a ballet is packaged, there has to be some new movement under the sun.

These ballets have none.

The triple bill opened with Clifton Brown’s “Menagerie,” a playful ballet that, as the title suggests, was a mash-up of styles and tones. The most obvious, and most welcome influence, was that of Lar Lubovitch, whose company Brown spent several years dancing with in between stints at Alvin Ailey. Like Lubovitch, Brown employs grand, sweeping arm gestures, as if he asked the dancers to scoop up great armfuls of air to the rhythm of the music.

Young choreographers who relate to classical selections from the pre-Philip Glass era are increasingly rare, but like Lubovitch, Brown composed phrases—with common, ballet-class looking steps—that easily synced with each phrase of the music, in this case Rossini’s duet in D major for Cello and Double Bass.

Undoubtedly, paying just two musicians was a bargain for the Washington Ballet, which has renewed its commitment to live music under new artistic director Julie Kent. The challenge for choreographers is to choose minimal accompaniment that still seems ideally suited for their movement. This Rossini duet was not, at least, not for a cast of 10 dancers, and not with these musicians sounding a bit too rough hewn. Again, a comparison to the recent Boston triple bill seems apt. That program included Jorma Elo’s sublime “Bach Cello Suites” and Justin Peck’s fun, slightly funky “In Creases,” set to Philip Glass’s Four Movements for Two Pianos. I’m not suggesting that the world needs more ballets set to those pieces, but that those two ballets are the gold standard for choreographing on a budget. Elo and Peck also employed complimentary lighting changes to mix things up a bit, and Boston Ballet hired top-notch players to join its dancers onstage.

Brown’s choreography for “Menagerie” worked best when he focused on romantic duets. But midway through the second movement, he asked dancers to break the forth wall by coming forward and waving to the audience. More cute quirks followed. I’m not at all opposed to humor in ballet, but a jocular tone works best if its set from the start. Think of Jerome Robbins’ “The Concert” or more recently, the ballets of Alexander Ekman. But the gags have to suit the music, and you don’t have to be a musicologist to guess that a chamber music duo by a bel canto composer does not jive well with silliness.

Attempting to blend shenanigans with a romantic score also tripped up Marcelo Gomes in his ballet, “The Outset.” His music of choice was Antonín Dvořák’s String Quartet No. 12, known as “The American,” since the composer wrote it after visiting Czech immigrants in Iowa. The quartet has its pastoral melodramatic moments, but doesn’t appropriately support a plot that parallels Call Me by Your Name.

All the dancers have all-American names in the piece—Lily, Angie, Jack, Hank, etc. The guys are dressed in button downs and dress pants, the women in bright lace-bodice dresses you could find at Ann Taylor Loft. Initially, the spirit of the work seems very much akin to Robbins’ “Interplay,” which has always reminded me of a high-end sock hop. There’s no indication of storyline until Oscar Sanchez split off from the crowd with Andile Ndlovu. In a subsequent scene, Sanchez proposed to Esmiana Jani, ring box and all.

Moments later, in what appears to be an unrelated plotline, Maki Onuki and her frequent powerhouse partner Brooklyn Mack dance in heartwrenching breakup mode. The lifts here were familiar but well-executed, Onuki on Mack’s shoulder, for instance. There’s a suitcase onstage, but it appears he’s having second thoughts, or leaving against the will of his heart.

Next up the ballet took a turn for the campy, however, as corps female dancers spun around Jani holding a veil, garter and bouquets. The ballet ends with a wedding, Ndlovu crushed and Mack broken in spirit, despite the hunky-dory climax written by Dvořák.

Gomes’ concept might work if set to pop music, or maybe even if he played up the hoedown-like appeal of Dvořák’s fiddle tunes. As a contemporary reminiscence on love, life and bad luck, things simply never gelled.

It’s Bond, a current American Ballet Theatre corps member, who created the most fulfilling ballet on the program, and she did it by simplifying her structure. One guy (Mack, working overtime) and six girls each had a turn to stand out in “Myriad,” another ballet whose title indicates indeterminacy. She choreographed to recorded arias and sonatas by Henry Purcell, and dressed her ladies in ethereal shades of cascading blue.

The most devastating duet paired Mack with Sona Kharatian, the company’s senior woman, who used her emotional maturity to depict a deep sense of loss.

Given that the other two pieces were also performed to classical selections, the recorded Purcell was a bit grating on the ears. Again, Boston’s triple bill offering proves instructive. That program concluded with the 2018 iteration of William Forsythe’s “Pas/Parts.” Like many of Forsythe’s other ballets, it’s set to a trippy electronic score by Thom Willems. I’m not a huge fan of this one, but the train-whistle/streetnoise soundscape certainly served as a contrast.

Musical conundrum aside, Bond’s ballet was also missing any choreographic marvels. Perhaps those will come in time. Perhaps those will come with more commissions. She and Brown certainly deserve them, but they must turn out more complete works to compete with the usual suspects—like Peck, Elo and Forsythe—and win more commissions from companies who are looking to program that elusive perfect triple bill.

Next
A Dancer Nonpareil