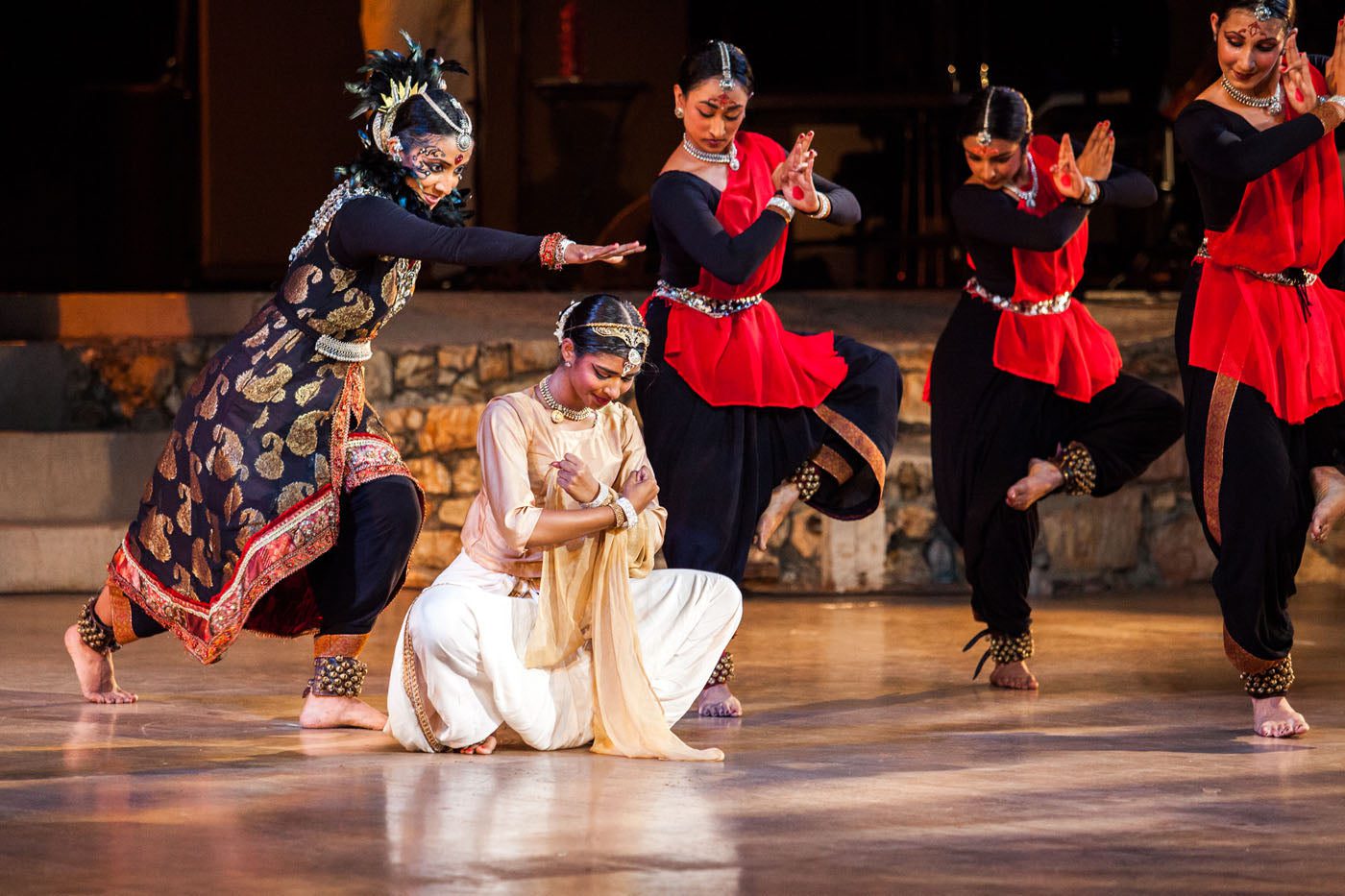 Mythili Prakash, an exquisite purveyor of the South Indian classical dance form, bharata natyam, characterized by elaborate arm and hand gestures, mimetic acting and intricate foot-slapping, is no stranger to portraying demonic characters in Buddhist literature. With “Mara,” she has crafted a spectacle inspired by Deepak Chopra’s novel, Buddha: A Story of Enlightenment, that was part Bollywood mash-up, part musical extravaganza and part psychedelic-inspired cinema.

Seen at the newly refurbished—and still bucolic—outdoor amphitheater in the Cahuenga Pass, this prologue and four-scene, two-plus hour work featured members of the Shakti Dance Company, which was founded in 1977 by the celebrated virtuoso Viji Prakash (mother to 34-year old Mythili and 28-year old Aditya). First seen at the Ford in 2013, the story explores the demon that tried to distract Buddha from his path to enlightenment.

In this telling, Mara, here called Jeeva, is the embodiment of the human mind, who, we are told in the press notes, is our guide to a tale of perception, transformation and self-discovery. And why not, as Jeeva, which is Sanskrit for “living entity,” featured more than enough entities for several lifetimes, none more potent, perhaps, than the 10-piece Aditya Prakash Ensemble.

With the acoustics amped up to earplug levels, Aditya led the band through song cycles (his full-throated, über-tremolo vocals were emotionally pitched throughout), the music a fusion of ragas, jazz, funk and early New Agey Wyndham Hill piano noodlings, knocked out by keyboardist Julian Le.

Mythili’s voice-overs (“I am Mara, I am you,” and other neo-existentialisms), pierced the night air, but with little emotional heft, which, of course, could be the point of cipherdom and the emptying of one’s mind.

This Jeeva also had three other Jeevas, representing a child, an adolescent and the mature being (Nikita Rao, Amrita Doshi and Malini Taneja, respectively), all dancing with conviction, if not with the most complex footwork normally seen in this genre. There was very little one-legged balancing, for example, and dramatically engaging solos were also in short supply.

In addition, two Buddhas (guest artist Tharini Shanmugarajah and Taneja), were astutely positioned on various levels on the hillside that is the Ford’s natural allure, providing a counterpoint to the sometimes frenetic entrances and exits of the myriad dancers.

The end of Scene 2, “Mara’s Army of Thought and Emotion,” provided some attractive visuals, with one dancer being wrapped in gauzy lengths of pastels by fellow movers, the vignette recalling a Maypole, the result conceivably symbolizing an endless sky.

Scene 3, “Jeeva’s Web of Attachment (“I ached for something, but I knew not what …”), had the benefit of lush and phantasmagorical imagery by Emmy Award-winning filmmaker, Kate Johnson (co-director, Mia, A Dancer’s Journey). These moving pictures not only served as a splendid backdrop, but highlighted details of Prakash’s face. Embellished with jewels, there were also extreme close-ups of her heavily outlined eyes, dark and seductive windows to the soul.

A kaleidoscope of colors, the film teemed with mandalas, clouds and butterflies, as well as Mythili’s hands, vibrant and expressive on screen. Johnson also shot Mythili dancing, where superimposed images pulsed with a certain electricity that was not always apparent on stage.

In fact, with a production of this size and scale, a director could sharpen the focus and pacing of the proceedings, as a patina of sameness seemed to descend on the many segments that had more false ending than a Beethoven symphony. Adding some male energy to “Mara” might also bolster the dynamics.

Still, with Kandarpa Manjari Bhuckory’s splashy costumes—Prakash’s was a feast of black and gold brocade, her headdress near-Firebirdian—and Eileen Cooley’s subtle but effective lighting, there was much to praise. The final scene, “Seduction,” though not overly tantalizing, repeated the phrase, “Return to the root of the root of your soul.”

Pondering this thought on a balmy Los Angeles evening, the world felt a little less scary, a little less dark … a lot more manageable, thanks, once again, to art.

Next
A Midsummer Night’s Breeze