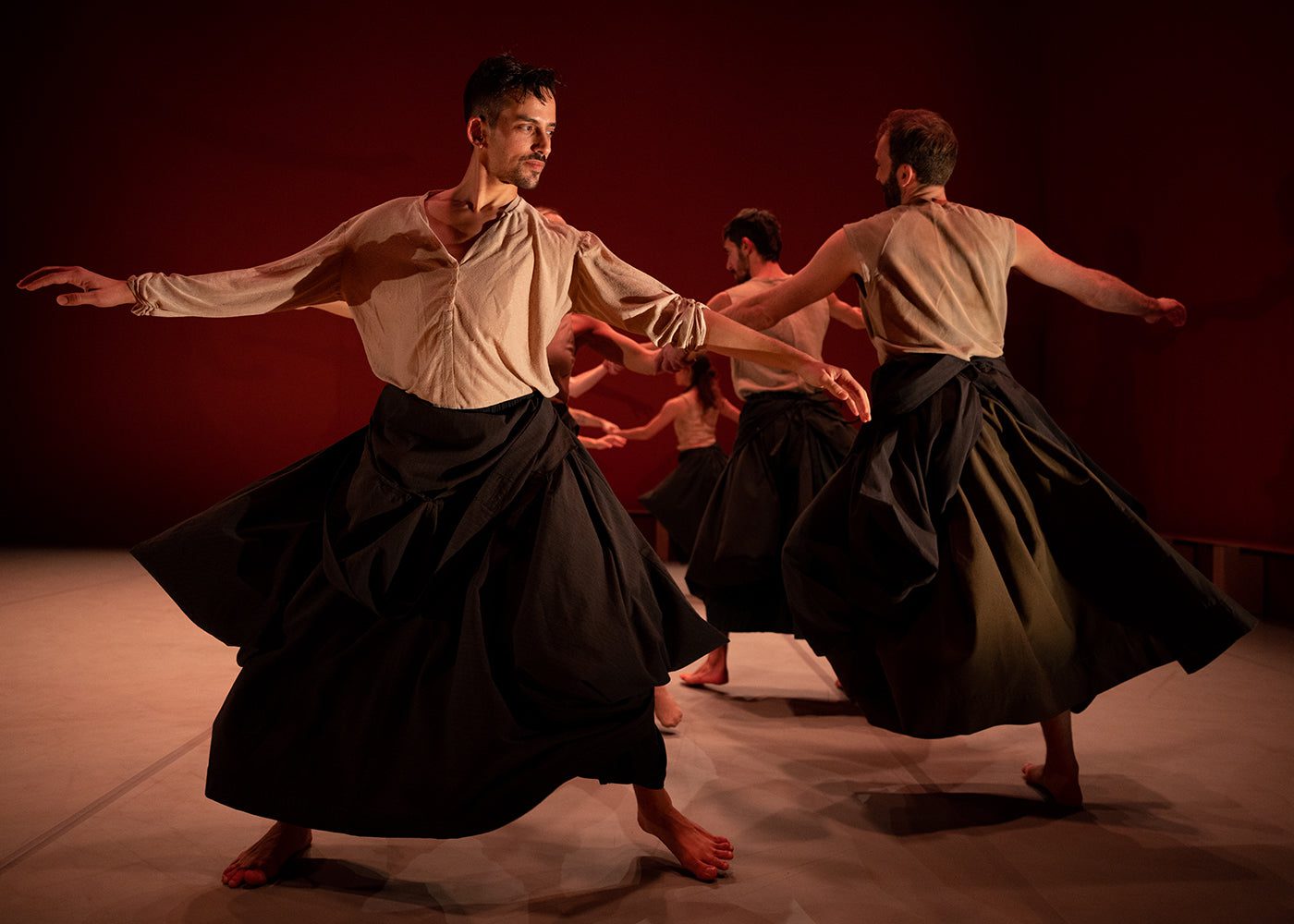 The stage is an orange box, with three simple long benches pushed against the walls. A dancer enters in silence, barefoot, dressed in a dark tunic with a collar that stands up at the neck and a bulbous skirt resembling petals of a flower. Other dancers arrive, men and women dressed alike. They take a seat, two to a bench. I imagine a Shaker gathering, austere and pensive. As the house lights go down and the music rises, the performers stand and take up a ritualistic stepping from side to side in unison. The flicking and scraping of bare feet against the floor is audible, forming a rhythm that will recur throughout the hour long “Pardes,” in this premiere performance by Israel based Vertigo Dance Company. The repetitive sway of hips as the dancers shift weight from one foot to the other is hypnotic—and a little threatening.

“Pardes” is Hebrew for orchard, and even though I had looked this up in advance, it’s only in retrospect that I begin to put two and two together about how the nature of trees might factor into the work. Choreographed by artistic director Noa Wertheim in collaboration with the dancers, with original music by percussionist Itamar Doari, “Pardes” is a complete pleasure to watch, whether or not there is meaning to be taken.

While shuffling their feet, the eight dancers perform a series of gestures with their arms, bare skin stark in contrast to the dark costumes. The pattern comes across as some kind of ancient language as the they stretch their arms to the side in a low second position, cross them over the chest, fan out flexed elbows to poke from their sides. They bring their hands to the back of their heads, then slide them over their faces and down their torsos. They trot around with elbows lifted and flared, hands meeting at the forehead, while sending a wave from one elbow, through the wrist to the other elbow and back. All the while, pulsing underneath is the rhythm of foot scraping, hip swaying from side to side.

At what point does one notice how the lighting casts shadows on the rear wall in a way that transforms the shape of the performers into trees? Four dancers line up front to back, yet their silhouettes appear as a diagonal line, the front dancer much taller, the others descending in height. When certain dancers break out from the group into solos and duos, is it possible to see their spiraling bodies as similar to a vine entangling a tree, or roots wriggling into the ground, or a plant stem unfolding its leaves?

This possibility of plant personae develops a bit more when two women face each other and remove their tops to reveal flesh colored camisoles beneath. They begin to explore each other, close but not touching. A little skittish, Sian Olles dodges a hug when she ducks under Korina Fraiman’s arm. When Fraiman places her outstretched hands on Olles’ face, it’s to hold her at arm’s length. Eventually, they sway together, Olles holding Fraiman’s head to her chest. It’s quite a sensual conversation between the two, their bodies winding and twisting. When they place their chins on each other’s shoulders, it feels like a kiss. Is this a romance? Or are they new flower tendrils sprouting from the same plot of dirt?

In a striking duet for two men, Micah Aimos cradles Etai Peri in his arms as if holding a child. When Aimos lifts Peri in front of him, Peri waves his legs like a bug upended from beneath a rock. Aimos covers Peri’s eyes with his hand, Peri dangling, limp and passive. Could this be damage from some external force of wind or environmental change?

Aimos and Olles are each featured in extended solos that convey distress. Aimos is self-punishing in brash acrobatic incidents where he throws himself to the ground; Olles, at her turn is wilting. In quite a long section she flails and swoops off kilter, twisting her skirt while the others sit and watch from the benches. In a fit, she whirls until Aimos catches her mid-move. When she finally collapses, the group drags her upside down by the legs. Once righted, she stands with her back to the audience, arms raised almost as if crucified.

There are sections of playful unity, such as when the dancers pass one another hand to hand in a daisy chain. They weave among each other in a pattern that could suggest the interdependence of nature. In the final moments, the full ensemble resumes the pulsing footwork with its scraping sound. Maybe it’s the hum of live things growing in the earth. The eight dancers form a horizontal line that spans the stage, holding hands. A few bend low into a bow, the others remaining upright to support them, then the positions reverse. The feet go still, lights out.

Next
Web of Culture