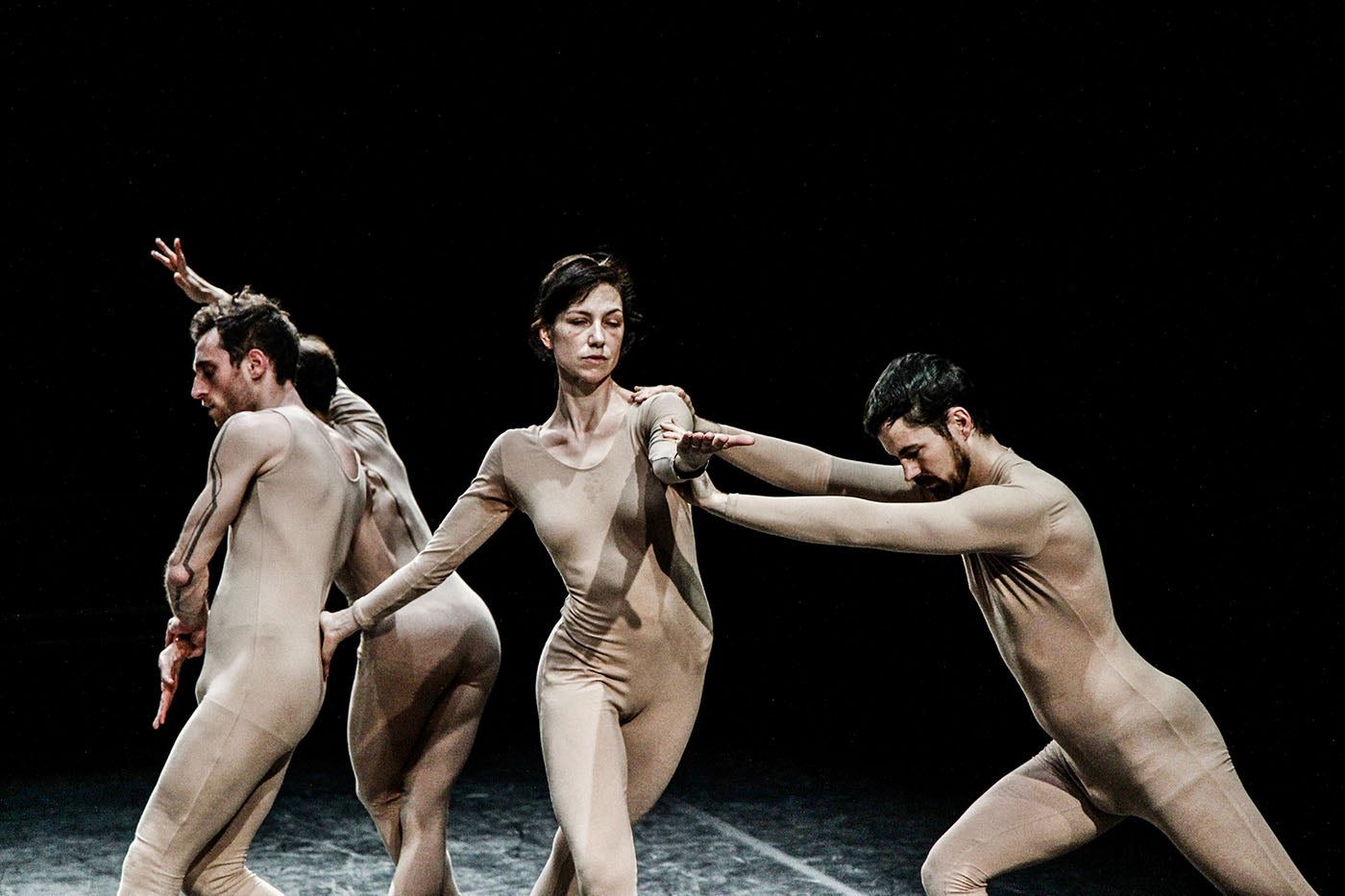 Feminism, queer theory, ontology, postcolonialism—these subjects and more cropped up in the whirlwind 90 minutes I recently spent interviewing Cecilia Lisa Eliceche ahead of the UK premiere of her latest work, “Unison.” The Argentine choreographer is an avid political activist and well versed in the academia behind the issues she’s drawn to, which range from wealth inequality to racism, sexism and international human rights abuse.

“There’s not just one cause that moves me,” she tells me. “I believe the current system of capitalism is patriarchal, racist, cruel and violent. I am equally moved by the Palestinian occupation, Black Lives Matter, Argentina’s #NiUnaMenos movement and certain ecological issues. I’m a member of State of the Arts, a self-organised platform of artists in Belgium who work together to address our concern of art practices in Flanders and the current state of politics at large.”

Eliceche is drawn to grassroots movements in particular, “like the Mario Woods/Alex Nieto coalition—the work they do is incredible. Justice just doesn’t exist for the black and Latino communities in the US, and it’s inspiring to witness this articulate, well-thought-out, persistent movement redefining the discourse around civil rights and bringing about change via the mechanisms of democracy.”

Given her passion for social and political justice, I’m keen to know if and how this permeates her art. Does she see dance as a form of activism? “My politics do move me to create dance in a particular way, but I don’t view dance as a way to make a direct impact on society,” she answers. “To me, it’s a practice in criticality, a way to use the body to consider alternative ways of being together. It’s important to me to do actual, concrete political activism outside of dance, like attending meetings and marches and participating in coalitions for causes I believe in.”

That doesn’t mean dance is separate from the political sphere Eliceche inhabits, though, nor that she thinks it’s incapable of having knock-on social effects. “I identify as queer, though I mainly identify as a feminist, which encompasses that. These identities transverse my body and life experience, and, intuitively, become part of my dance. I took a class with Judith Butler at UC Berkeley on queer theory, and something she said that I find important for dance is that she considers the performative as generative. Peggy Phelan speaks about the ontology of performance as ephemeral, that it only exists in moment, but Butler says that actually it’s generative, it’s concrete. I really connect with the utopian potential of performance, that it can be used to create alternatives within the normative.”

Eliceche was born in Bahia Blanca and got her start in dance taking folk and basque classes at a local cultural center as a young child. She moved to London briefly when she was eight, where she took her first ballet class, before returning to Argentina and continuing her studies at Bahia Blanca Conservatory.

“We had ballet every day, as well as music, French and dance history classes. At age 15 the school opened a contemporary dance department and I largely switched over to that. I was among the first generation outside of Buenos Aires to experience that—contemporary dance classes didn’t exist widely in Argentina at the time.”

As a student during the 1998-2002 Argentine Great Depression, Eliceche saw her fair share of political activism up close. “It’s practically cultural patrimony in Argentina,” she tells me. “There were a lot of strikes at the time across Argentina’s public school system. Lots of education subsidies were being cut. Sometimes we didn’t have a teacher for months and were forced to teach ourselves! That was an important part of my education—witnessing how much activism it took to keep our school running.”

It was during these school years that she became acquainted with the work of Belgian choreographer Anne Teresa De Keersmaeker, whose style moved Eliceche so much that she eventually moved to Brussels to study at the eminent Performing Arts Research and Training Studios (PARTS), founded by de Keersmaeker in 1995. “A teacher showed us her ‘Rosas danst Rosas’, which I thought was amazing. The dancers were touching their boobs!” she recalls jokingly “That kind of minimalist, persistent dance was very new to me. When I learned about the school in Brussels, the auditions had just passed, so I waited and auditioned the next time around. It was around that time that it became clear to me that I wanted to pursue dance professionally.”

These days Eliceche is a choreographer, a freelance dancer and an assistant to ballet master Janet Panetta. She’s worked in many places—the US, Spain, Togo, Sweden—but continues to base herself in Brussels, which has “an amazing public subsidy system that welcomes international artists and allows them to stay and earn their living. Having incredible choreographers from all over the globe—Latin America, the States, Africa—feeds the scene here and creates social value. Brussels is a very rich place to be—creativity here is not based on competition but exchange within the artistic community.”

Given this whole-hearted embrace of diversity, it’s unsurprising to hear that Eliceche takes inspiration from a variety of sources as a choreographer. “I describe what I do as experimental dance inspired by the history of Western dance, which includes ballet, American modern dance and the choreographers currently working in Europe, as well as a host of other dance influences: Latin American folkloric and popular dances, spiritual practices like voodoo, Native American craft, tango.”

She’s reluctant to categorise her work as ‘contemporary dance.’ “I find that concept problematic—it’s like trying to claim a monopoly of time. And it assumes that you work in opposition to ballet. I may not have a life in the ballet world strictly speaking, but that technique has definitely formed my body, and seeing classical and romantic ballets has obviously influenced my work. I always work in relation to history; I’ve never rejected ballet, even though I don’t practise it exclusively.”

I ask whether she ever sees ballet, with its visible affinity for regressive gender roles, as incompatible with her feminist values. “I use the technique of ballet as a tool to experiment with my body, so in that respect it helps me grow. If you think specifically about identity politics in the history of ballet, you could argue that many women have been made economically independent through ballet, though of course it has a history of prostitution too. And in terms of body image, okay there’s not too much space for different sizes within a company, but sexuality-wise it’s very fluid – there are many queer ballet dancers and even certain choreographers who embrace queerness, like Katy Pyle, who founded Ballez in New York to create classical ballets like “Swan Lake” around dancers who self-identify as queer.

“I wouldn’t say ballet is inherently normative,” she continues. “That has to do with the practitioners. Look at ballet’s origins—before coming to the French courts it took a more burlesque, operatic form. That consideration is essential. The notion of rethinking tradition and reappropriating it for today is integral to me as a choreographer.”

Our conversation turns to the male-dominated upper ranks of the dance world. “Ballet is not necessarily more misogynist than contemporary dance. There’s no question that in most dance spheres the best opportunities are given to men. Just look at the amount of male choreographers who are famous compared to female—it’s insane.

“As a female choreographer, it’s important to keep your own integrity and not be affected by the male monopoly of artistic theoretical discourse. Of course, being able to get to that point is all about opportunity—if you can get the means, you can develop your craft, but if you don’t, you’re struggling, and that affects your work. I’ve been very fortunate and again am so grateful for the Belgian subsidy system. I actually decided to only work with women a while ago, and while that has since changed—there’s a man in my current work!—it was invaluable to me be able to keep my integrity that way if I so chose.”

That current work is “Unison,” which Eliceche describes as “an effort to view unison through four different traditions of dance: formal dance, folk dance, sculptural movement and contact improvisation. These are all interlinked. The work explores dissonance, hybridity and geometrical patterns—how we can make unison in a mathematical way with bodies as group.” She goes on to reveal that “we’re never actually in unison! Well, we’re never simply facing the front doing the same thing at the same time. It’s a constructed form of unison using perpendicular and counter directions. It’s about us being together as a group.”

Eliceche is one of the four performers in the piece, “which means I really get to work from within. Being part of a dance helps me refine the necessary sensitivities and define the internal logic of what I’m creating.” Like much of her other work, “the piece isn’t feminist in an explicit way—it doesn’t deal with the male gaze or the parameters of how a feminine body should be represented, for example—but I did compose it from the logics of feminism that inspire me. I took particular inspiration from the practice of weaving, which a traditionally female activity.

“The dancers I’m working with are skilled, grounded, mature dancers who are very open to experimentation,” she adds. “It’s been great working with such lovely people. And performing to such receptive audiences! I’m very excited to show the work in London. England, like Belgium, has been open and generous to me, and I can’t wait to share my work with the audience and see how they experience it.”

Previous
Turn up the Heat