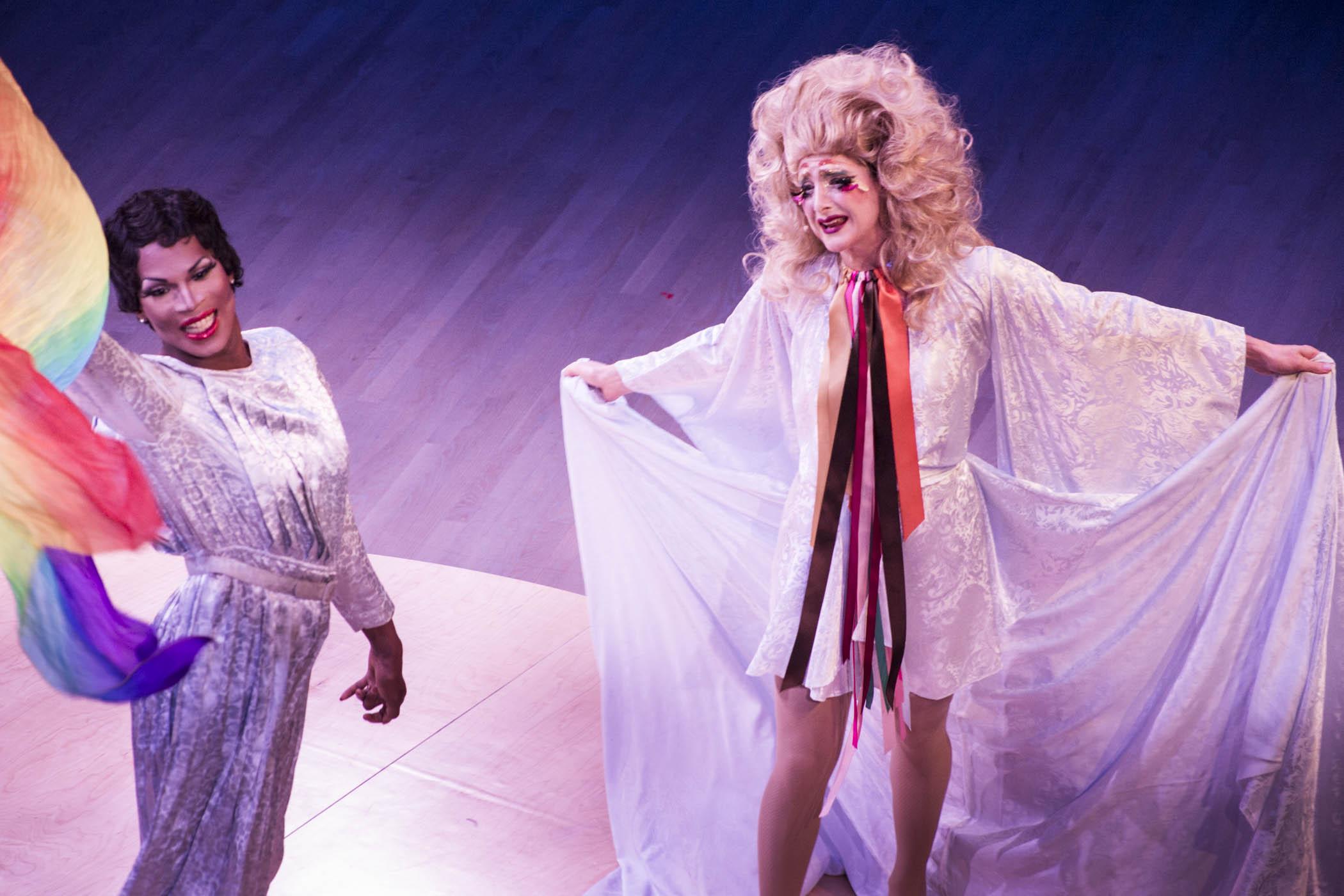 Before I tell you all about the inaugural Transform Festival, four words: Nicole Klaymoon’s Embodiment Project. The name has circulated among San Francisco dance fans since Klaymoon began making hip hop dance theater here in 2010, but so far the group has only toured to Oregon and Kenya, and they should be known everywhere. “Ancient Children,” the closer on the Transform Festival’s penultimate night, simply possesses the stage. The performers are charismatic, the hip-hop dance commanding, the truths delivered unflinching. In case I haven’t been emphatic enough: Call up your local presenter. You need to see this.

“This is the next step in the kind of hip hop dance theater Rennie Harris birthed,” I thought while watching, only to discover Klaymoon danced with Harris’s Puremovement in New York. Now a professor at the University of San Francisco, her own dancing is limited to locking and popping while narrating “Ancient Children” through a headset, but she draws virtuoso moves in styles from b-boying to Electric Boogaloo from her eight dancer-actors, who range in background from a veteran of Urban Bush Women to a Stockton-born turfer who doesn’t seem to have any other formal dance credits. Just as important: Klaymoon draws on high-substance source material, and she pulls together a nonpareil team of visual and musical collaborators. “Ancient Children” is based on Healing Justice, a documentary film about the school-to-prison pipeline and the potential of a new disciplinary philosophy, “restorative justice,” to disrupt it. At its root, though, “Ancient Children” is about childhood abuse, the effects of trauma on the brain, and the way those fight-or-flight effects are ill-handled by ill-equipped school systems.

The powerful singer-songwriter gina Breedlove, hallowing the performance space as the evening’s medicine woman, warns us that “some of our stories are hard to hear” and encourages audience members to “take care of yourself” and step out when needed, and in the toughest moments—when dancer Amber Julian portrays a girl describing her sexual abuse, for instance—several audience members did. But most couldn’t tear themselves away, because “Ancient Children” is so masterfully shaped and paced, the dancers slipping so naturally into their speaking personae. d. Sabela Grimes, a faculty member at USC’s Glorya Kaufman School of Dance, is credited as collaborating director. The composer XOA contributed the heart-pumping soundscore, with a bittersweet final musical selection, the story arc landing on a note of perseverance rather than happily-ever-after triumph, from DJ Cecil.

“Ancient Children” was the blow-the-roof-off highlight of a new festival, to be presented twice annually, that must be counted a resounding success. Both weeks of Transform Festival, which presented seven performance groups on three shared programs, nearly sold out. It’s the creation of spoken word artist/actor/dancer Marc Bamuthi Joseph, installed a few years ago as YBCA’s director of program and pedagogy (“what happens when you let a poet name themselves,” he’s joked).

Each edition of Transform Fest, to run every fall and spring, will feature Bay Area choreographers responding to a question of the moment, this time: “Why citizenship?” For this first festival, Joseph also commissioned Mexico City-based architect Giacomo Castagnola to create a stage design, which placed bleacher seats with a row of rolling stools on the south side of the Forum, a large video screen on the west wall and a smaller screen, hung higher, on the east, and a curved seating area with four rows of seats facing a large round stage platform on casters in the northeast corner. He created four other rolling elements, like a story-high ladder and a sandwich-board style rolling platform, for the choreographers to use at will. This set was a brilliant unifying element. None of the choreographers seemed hampered, and many made ingenious use of the environment.

For “Tides Tides Tides,” Jesse Hewit flung a doll made of rope upon the round platform stage and threw himself in the air and let himself crash in an “empathy game” mimicking the imaginary body; later he rappelled from the second-story catwalk, and on the screens he played video of pixilated water images by Donald Hanson, overlay with Hewit’s own poetry—phrases like “NO MORE NEW THINGS WE ARE DROWNED” and “PROPOSAL: WE ARE LITERALLY ONLY FOR EACH OTHER.” A tall, somewhat burly young man who radiates a Buddha-like compassion, he sat among the bleacher seats and explained, very earnestly, what he’d be doing and why. This is a tactic of authenticity used often by Hewit’s forebears in Bay Area radical dance, Keith Hennessy and Jess Curtis; Hewit has a tenderness in his demeanor and an absolute sincerity that I found refreshing.

In Fogbeast’s “He’s One of Us,” the room became the set of a pseudo-TED Talk, or Apple product unveiling, with Patricia West, in heels and slacks, nailing the co-optation of feel-good solidarity in service of “clients” and “capitalizing.” Less compelling were the dance passages between West and Melecio Estrella, both mentored by Joe Goode and clearly influenced by his underwater-like style. Estrella, telling the story of being a third generation Filipino-American forbidden to learn his grandmother’s language, beautifully sang a lengthy song in his lost tongue.

“Opia,” a collaboration between dancer Larry Arrington, vocalist Sandra Lawson-Ndu, and interdisciplinary artist Minoosh Zomorodinia, mostly evaporated from mind, I’m sorry to say. There was skittering backwards in hooded sweatshirts and bare legs in kneepads. There were brightly colored strings pulled from the faces of the hoods and then pegged, like vectors, to members of the audience. The aesthetic was intriguingly non-theatrical. I suspect the fault in transmission was with me, and not with these intensely committed performers who have left me somewhat baffled on first encounter.

On the other hand, I vividly remember the contribution from Amy Seiwert’s Imagery, a ballet company (led by Sacramento Ballet’s newly appointed artistic director) I’ve been fortunate to watch many times this past decade. I wondered how Seiwert, who can be wonderfully abstract and formalist in her choreography but still leans towards a polished, hand-fluttering classical ballet aesthetic, would meet the charged question “Why citizenship?” Unfortunately, the answer is awkwardly. The new work here was a gesture-driven dance to a recording of 1950’s journalist I.F. Stone recounting labor organizing struggles.

One feels a weird disconnect watching bunheads with elegantly coiffed hair mime about labor struggles, and a sing-along of labor activist Joe Hill’s music didn’t rectify it. Seiwert was at her best addressing the audience directly, when she told tales of creating her ballet “The Danger of Speaking” for Ballet Austin, and a board member’s attempt to suppress it. Alas, Seiwert’s festival contribution closed with a duet in which James Gilmer and Kelsey McFalls, with black hoods over their heads, sputtered phrases from the famous Billie Holiday song about lynching, “Strange Fruit,” while trumpeter Darren Johnston blew his horn at them. I am enduringly troubled and moved by “Strange Fruit” as much as anyone, but it’s just too obvious a protest statement in the hands of a ballet choreographer, and left me feeling Seiwert hadn’t dug very deep.

On the final night, the female-impersonating-a-male-impersonating-a-female drag queen Fauxnique shared a bill with RAWdance, the company led by longstanding dance partners Wendy Rein and Ryan T. Smith (an eloquent mainstay of the Margaret Jenkins Dance Company). Fauxnique led the room in a participatory line-dance to Joni Mitchell’s “California” to “work out our shame” as Americans; RAWdance tipped off a domino-chain of hardbound books and sent Katerina Wong to commandeer and coerce the other dancers as an anti-intellectual dictator. Neither work astonished or challenged me, but both were thoughtfully staged and well-received, and what I loved most was overhearing the drag-fan audience rave about the RAWdance performers, and the modern dance audience fall in love with the drag queens. As a whole, this “Why citizenship?” themed festival functioned more as a celebration of diversity and a gathering of solidarity than as a forum for questioning. But that was fine. That was needed. That was beautiful. Here’s looking forward to spring’s Transform.