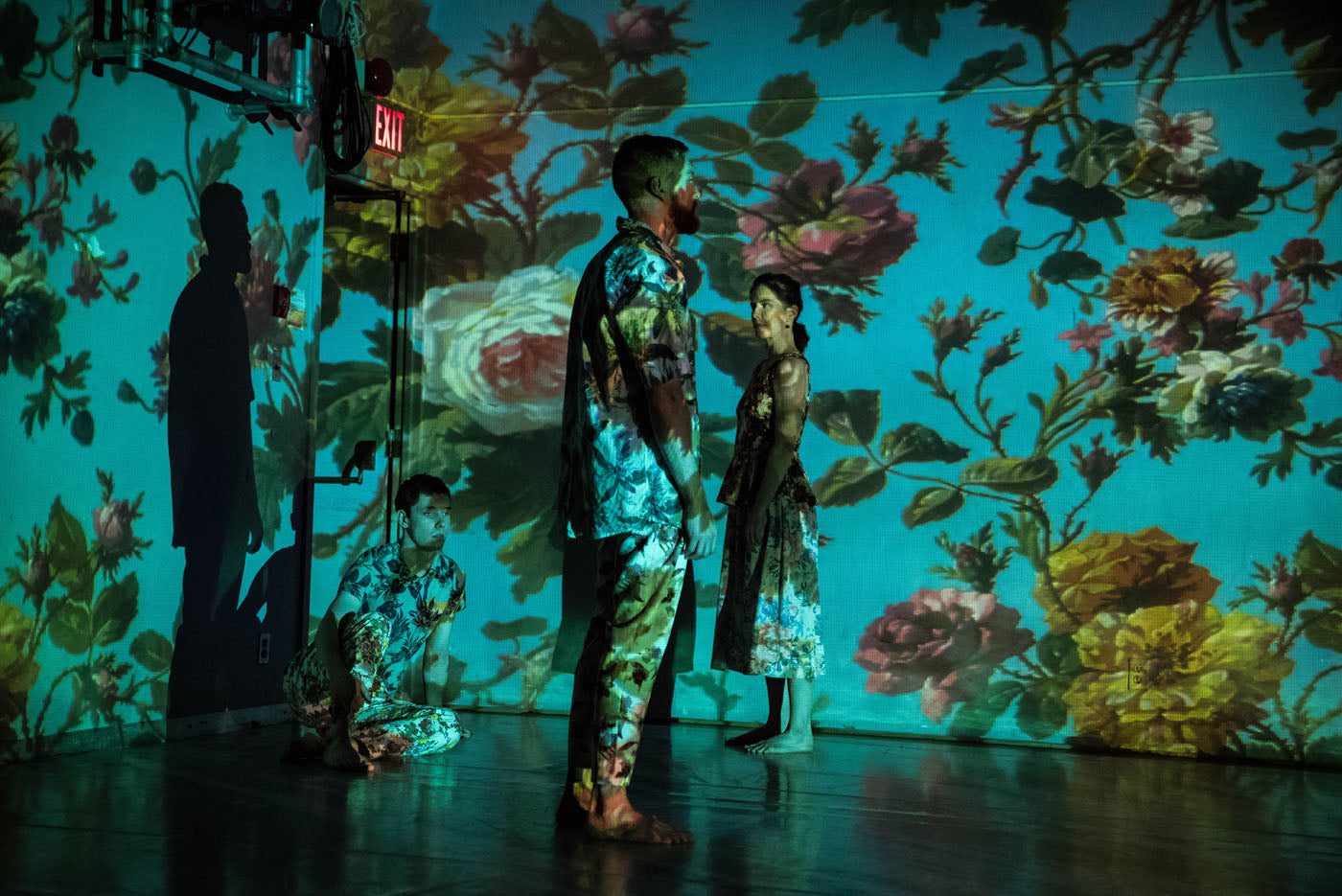 Themes were choice, play, youth, and freedom at Toronto Dance Theatre’s Emerging Voices program, premiering work by Alicia Grant and Emily Law. Both choreographers had the opportunity to develop their work within TDT’s choreographic incubator facilitated by TDT Artistic Director Christopher House, and set their work on company dancers.

Diving straight in with no preamble was Law’s “Mercury dust.” Prior to house lights, a few dancers wandered around the stage, which was as bare as I’ve seen ‘the Winch’ theatre. Stripped to the walls, which smelled of fresh paint, a kind of dove grey, well, studio floor grey, the white arch on the back wall was revealed, as were the mouldings on the ceiling and space to the sides, which would normally be part of the wings. Lights and rigging stuck to the walls like so many squashed flies on a windshield.

Because of this openness, elements of the stage included some floor lights and a tall spotlight on wheels, a clothing rack with hanging items, a mixing desk for the music. Four dancers essentially took turns being in control of each element, or dancing. How it was determined was, I think, associated with random chance. The rules were never explained, but nor did they really have to be; apart from being a well-known device in dance, if it were only part of the internal workings of the dance, the overarching structure it offers the dance remains. And it was very enjoyable because it played on several levels, like a singing round.

The first solo, danced by Danah Rosales, was a whirling, agitated piece that left no part of the body unshaken. Especially good was the working of her pony tail, whipping her head in circles, following through as though each limb was a kind of pony tail; original and expressive, it had the feeling of a dance you might make up in your bedroom. Falling down is a natural end to such cathartic movement, as is the slow getting up again. She wore black, and a spotlight followed her down to the floor, and the shadow of her prone body loomed on the back wall. The next dance, floorbound, one of minimal shifting, and contorting was more one made in the bath, while full of water. Doused in pinkish light, Peter Kelly looked morbid and grotesque.

The dancers traded places, but it wasn’t about to get predictable. Each tore a floral printed garment from its hanger and joined Jarrett Siddall in one corner of the theatre, now luminous with a vintage floral print, rosebuds flooding the wall. In this garden, Siddall moved as though sneezing. First with the nose, and then the whole body. Others followed suit, a sneezing, jerking quartet in the flowery garden corner. Of course it was amusing, and as they progressed out of the corner, they let the silliness show.

Law’s phrase for the work is ‘heartbreaking joy.’ It might have been more heartbreaking than joyous as moments of poignancy permeated. A duet, both in black dresses, kept a perfect, close harmony with one another while showing no sign of recognition of the other. They slowly grasped and pulled their way forward. Another solo was something like a dance in the bathroom, of sliding the soap up and down one’s skin, skidding feet across the floor, closed in on oneself as though there were open windows.

There is a touch of sadness too in the clothes left on the floor, and notes of delirium, despair in Law’s ensemble choreography. It stops short of chaos, however, contained by the rules. Dancing in a group they are geometric, in lines and diamond shapes, and there is a sense of strength and building, somehow. There is community.

Alana Elmer dons a shimmery grey jumpsuit and heads upstage right for the final solo. It was about time someone climbed the walls; using her feet, she lunged and pushed into extensions. About then one noticed light streaming in from the opened door marked Exit. It was a nice question—will she or won’t she? Whatever she did, it was right.

Grant’s “TDT House of Dreams,” an infectious, sherbet-coloured work for a quintet of dancers, set to an upbeat pop mixed by Victoria Cheong, was not as whimsical as it first seemed.

In a tight knit group, the dancers bounced, shivered, plunged to the floor in rubbery plies, and gestured, fingers outstretched. They started to orbit around the stage while making little variations of their movements, sometimes shared, sometimes echoed, but always with a sense of cohesion, union. The patterns were fun in themselves, as were the slight furrows on their brows or smiles at nothing. One by one, they came alive as characters in their small dance patterns, like the first few minutes of a conversation with a stranger. The oh-yeah minutes; I see where you’re coming from, and it make the audience smile.

It was light and delicate, these mini-moves riding the pop waves. O-so-gradually it escalated, dancers becoming bolder, more sure of each other until one was carried flopping and jerking like a fish on the dock by the rest. As they struggled to keep the lifts loose, and maintain the bouncing rhythm, everyone was in on the joke.

Grant makes a dramatic shift in tone; three dancers lie with legs open toward the audience, eyes looking at nothing, making voyeurs of the audience for this provocative and blatant scene. It was curious that this scene, with its imaginary partners, and a sense of isolation, contrasted with the trust and intimacy existing in the ensemble. Everyone sat up a little in their seats.

The work was in the end a story of making new connections, new associations; elbow to elbow, nose to knee. Even as they broke apart in the final section of the work, now with a renewed intensity and depth, giving themselves room for a run up and a leap into one another’s arms, the thrill of connection was on display. Dancing in the work were Justin de Luna, Yuichiro Inoue, Megumi Kokuba, Pulga Mechochoma, Christianne Ullmark; dancers who hail from all corners of the globe.