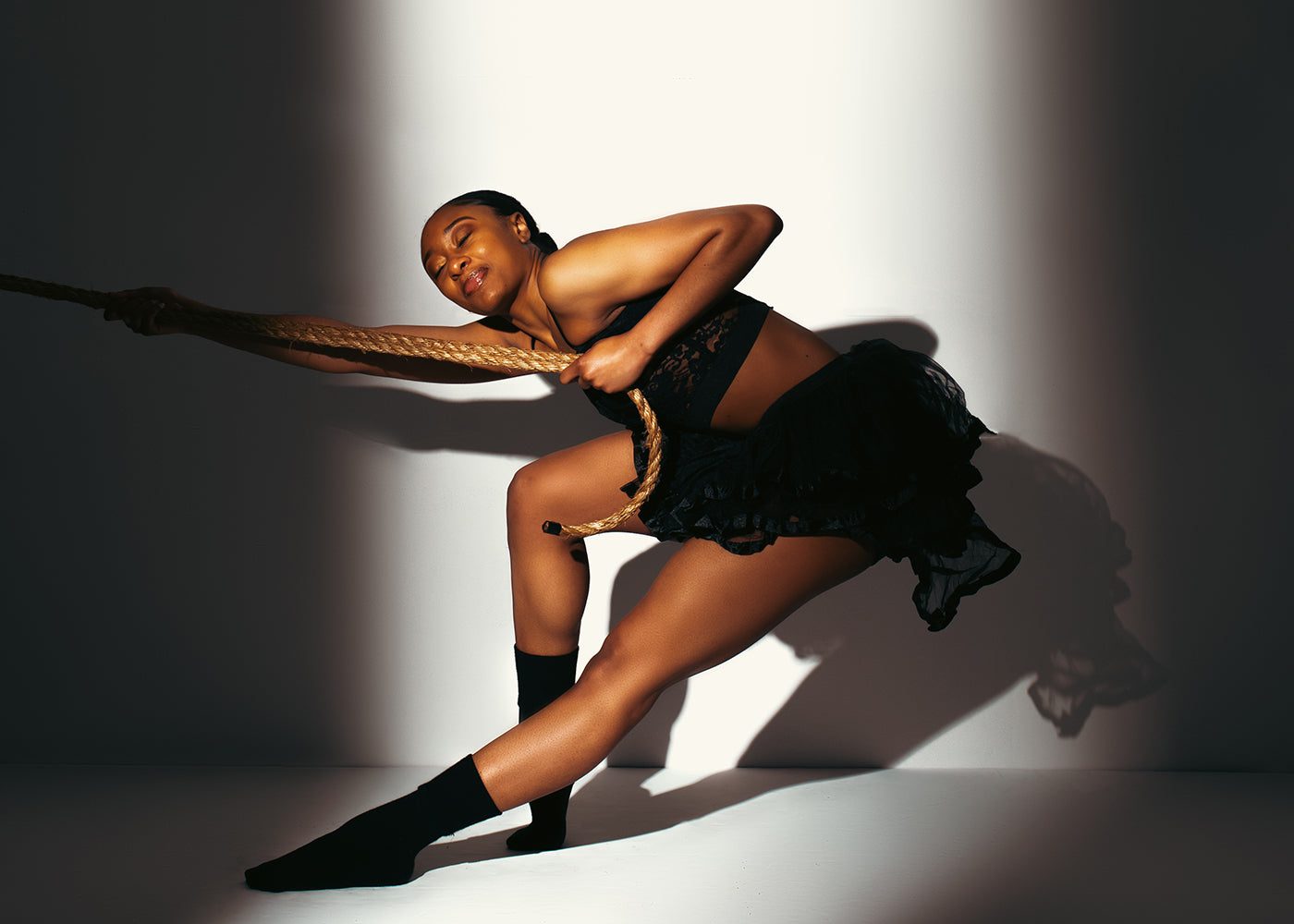 Tommie-Waheed Evans' “Bodies as Sites of Faith and Protest”

House lights are still up as Tommie-Waheed Evans’ “Bodies as Sites of Faith and Protest” begins. A group of dancers in all black step on stage, marching and clapping in time. Facing in toward each other, they are unified and mission-driven. Suddenly, a single dancer emerges from the group singing the folk song “We Shall Overcome.” He walks carefully straight ahead, proclaiming the Civil Rights anthem to the audience. The lights dim.

Evans is a 2021 Guggenheim fellow who is currently in residence at Philadanco! His Philadelphia-based company, waheedworks, is made up of impressive contemporary dancers from Philadelphia and New York. Leading the company as rehearsal associate and featured soloist is Roderick Phifer, a celebrated former dancer with the acclaimed BalletX. An outstanding technician and lovely singer, Phifer’s limbs stretch boundlessly and his torso rides smoothly over hills and valleys.

Marching is a recurring theme of the piece. Juxtaposing this ongoing tread are poignant moments of stillness. Based in part on speeches by Dr. Martin Luther King Jr., the piece features a fiery excerpt from the movie Selma in which Dr. King (played by David Oyelowo) delivers the eulogy for Jimmie Lee Jackson, a young Black man murdered by a White Alabama state trooper in 1965. “Who murdered Jimmie Lee Jackson?” Dr. King asks over and over. “Every White lawman who abuses the law to terrorize. Every White politician who feeds on prejudice and hatred. Every White preacher who preaches the Bible and stays silent before his White congregation. We must be concerned not merely about who murdered him but about the system, the way of life, the philosophy which produced the murderer.” To Oyelowo’s impassioned cadence, the dancers lie down one by one until all are still, face up like chalk outlines. Evans demonstrates that a body as a site of protest is a body in peril. Of course, “our lives begin to end the day we become silent about the things that matter” and so an idle body is also a body in peril.

Evans’ depictions of protest struggle tend toward the literal—fists raised in solidarity, dancers falling and helping each other back up. His dealings with faith are much more mysterious.

The major textual inspiration for the piece is a 1968 speech by Dr. King delivered at the National Cathedral in Washington, D.C. Using “We Shall Overcome” as a rhetorical framework, Dr. King quotes literature and the Bible to deliver an invigorating message of unwavering hope.

“We Shall Overcome because James Russell Lowell is right,” he says toward the end. “‘Truth forever on the scaffold, wrong forever on the throne. Yet that scaffold sways the future and behind them unknown stands God within the shadows keeping watch above his own.'”

When Phifer opens singing “We Shall Overcome,” he is steadfast, a model of Dr. King’s faith. Soon, however, the ominous echoing of Gregorian chant crescendos and Phifer is knocked to the ground. He writhes and scrambles backward, trying to escape. The chorus swells, and the dancers wave, reach, and turn in unison as their gigantic silhouettes are projected behind them on the brick background (Calvin Anderson’s excellent lighting). As the chorus reaches a supplicating climax, we see James Russell Lowell’s “shadows” towering above the dancers. Is God there, too, “keeping watch”? “Dona Nobis Pacem!” the choir pleads, grant us peace! But there is no apparent answer.

When God does appear, it is not in the way we might think, and He is heard before He is seen. A tinkling of piano sparkles in like sunlight and a gentle glow pours in from downstage right. Before we even register the words “Wholy Holy,” the very timbre of Aretha Franklin’s voice strikes through to the soul so immediately and uninhibitedly that we are certain, without question, that the song must be sanctified.

How does one dance to the Gospel of Aretha Franklin? In other words, how does one react when finally confronted with the Divine? Pope John Paul II describes this occurrence in a Letter to Artists:

“Believers find nothing strange in this: they know that they have had a momentary glimpse of the abyss of light which has its original wellspring in God. Is it in any way surprising that this leaves the spirit overwhelmed as it were, so that it can only stammer in reply?”

The dancers stumble into the ray of light, shielding their eyes, sometimes even falling to the ground. Matched with the extraordinary beauty and calm of the song, the spasmic responses of the dancers are curious and in line with Pope John Paul II’s “stammering reply.” Here, finally, is peace, but “this is that peace which passeth all understanding.”

What is understood is that peace and justice, both in clarity and in obscurity, while originating with God, are certainly not gifts acquired passively. In Dr. King’s words, “without hard work, time itself becomes an ally of the primitive forces of social stagnation and irrational emotionalism.” And while the individual plays a powerful role, ultimately, these are collective pursuits. “Bodies as Sites of Faith and Protest” ends with the full company back together, this time in dress clothes. Duets emerge with embraces and lending of hands. Lastly, they all lock arms and face the audience determinedly. “Walk together, children!” Dr. King concludes in the 1968 speech. “Don’t you get weary!”