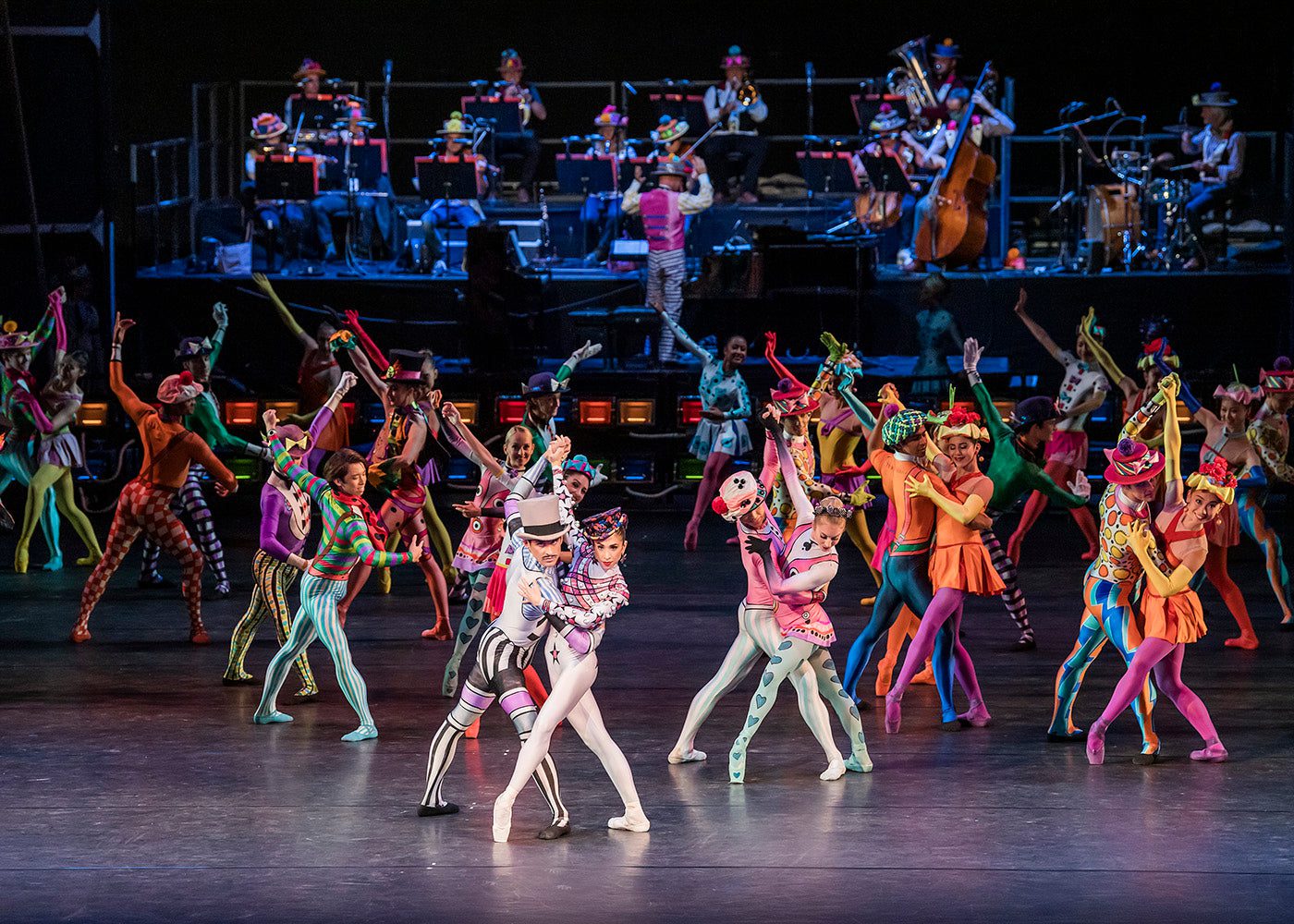 The dance scene throughout the pandemic has largely consisted of old, recorded performances being posted online. These videos have their merits, but also many limitations. The Royal Ballet boldly tried something different last week. The entire troupe managed to gather safely to put on a gala broadcast live over the internet. Anyone with wifi could purchase a sixteen pound ticket and watch from home, with access to a recording of the performance through November 8th.

The company’s last performance at the Royal Opera House was on March 12, seven months prior. After such a long break you might think they’d try to ease back into things, but the opposite was true. The event was jam-packed: fourteen different excerpts spanned over three hours and included nearly everyone on the roster—thanks to a “limited edition” version of Kenneth MacMillan’s “Elite Syncopations” rejiggered to accommodate the whole company as a finale. I cannot imagine the planning process for such an event, nor how they maintained strict Covid protocols for the entire cast (with ten couples permitted to dance together because of frequent testing and/or cohabitation), artistic staff, orchestra, stagehands, janitors, and the costume, wig, shoe, and makeup departments. Kudos to the Royal for pulling off this impressive feat.

The show began with the orchestra playing the epically optimistic overture to Tchaikovsky’s “Sleeping Beauty,” conducted by Jonathan Lo. The musicians were socially-distanced, and they were such a large group that they completely covered the bottom floor of the theater. (All orchestra seats had been removed for the occasion.)  There was an invited audience of around four hundred people in the tiers above, consisting of students and nurses. They too were spread out, wearing masks. So neither the tunes nor the cheers were canned, and it was delightful to witness this consummate act of live theater even at a continent’s remove. But I was jealous of those attending in the flesh: how great must the acoustics have been with the orchestra liberated from its pit? Later in the evening rehearsal director Christopher Saunders answered that question: “with the orchestra in the stalls it’s like having Bose speakers by either side of my ears.”

After the hopeful prelude, the curtain went up on an excerpt from Hofesh Shechter’s bleak and grungy “Untouchable.” I loved this about-face. Twenty dancers were arrayed in rigid rows, their grayscale sweatsuits barely discernable in the smoky haze. The music, by Schechter and Nell Catchpole, was pulsing and low. The dancers began in gooey unison. Suddenly they all lifted a leg: an emo riff on the startling snap to first position in Balanchine’s “Serenade.” They then split into blocks of angsty steps, but maintained their separation throughout. They reformed their unit as every dancer raised one arm, index finger pointing skyward, torso heaving. What a fantastic bit of programming: the rosy classical overture dissolving into people effectively in their jammies in the dark, connecting through choreographic memes but never through human touch. How apt.

After this big group opener, the next twelve numbers were mostly pas de deux—which made sense given the restrictions—though it also turned the performance into a typical fundraising gala hodgepodge. The programming ticked off every repertory box: classical, neo-classical, and contemporary; in-house vs. imported. As usual, some of the works showed better than others in these small bits. I often find that the moodier, more dramatic pieces are less successful in snippets, and that pretty much held true. The lighthearted, technically demanding pas de deux from Frederick Ashton’s “La Fille mal Gardée” works better in bite-sized gala form than, say, the fraught trio from Wayne McGregor’s “Woolf Works.” Though if I were to pick one to watch in its entirety, I’d choose the latter. The one exception for the evening was Cathy Marston’s emotionally charged pas de deux “In Our Wishes,” beautifully danced by Reece Clarke and especially Fumi Kaneko—gorgeous in her high-necked gown by Roksanda. This pas, to Rachmaninoff (played by Kate Shipway), reminded me of a modern update of the tumultuous third pas de deux from Jerome Robbins’s “In the Night.” It was also a company premiere. That the Royal was able to showcase new repertory fresh out of quarantine is another laudable achievement.

“In Our Wishes” separated the Act II pas de deux from Petipa’s “Swan Lake” from George Balanchine’s “Diamonds” pas de deux. This was risky planning, given that both are very long adagios in white tutus. But it was fascinating to compare the two nearly back to back, for one is an homage to the other. You could see how much reverence Balanchine had for Petipa’s archetypal duet, but also how much he transformed the art of ballet through his musicality and aesthetics. Though the casts of both were excellent—with Akane Takada and Frederico Bonelli in the oldie and Sarah Lamb and Ryoichi Hirano in the remix—“Diamonds”  was far more engrossing. It conjured a fully-realized world—weighty and cold—while the “Swan Lake” pas felt hollow without its backing swan corps. The latter works better when it demonstrates how two people can seemingly stop time and make a connection amid a throng. But I suppose that’s as difficult to pull off onstage as it is in real life right now.

It was also interesting to compare the pas de deux from Kenneth MacMillan’s “Carousel” to the balcony pas from his “Romeo and Juliet.” I had never given much thought before to how they were basically the same thing—the former just has tomboyish vocabulary like stomping and clenched fists. Both were well danced, with Francesca Hayward’s natural acting ability on display as Juliet. Matthew Ball’s costuming by Bob Crowley was a disservice, however: it’s hard to pull off a casual cowpoke stance—thumbs in pant-pockets—while wearing a satin vest with no shirt underneath.

The penultimate ballet was the Act III pas from “Don Quixote,” which is such requisite gala fare that I was almost dreading it. However, Marianela Núñez and Vadim Muntagirov looked like they were having so much fun being back onstage that it was invigorating, and also touching. Perhaps after such a long hiatus, even ballet clichés were welcome to me. But I think my joy had even more to do with the fact that Núñez laughed and flashed sassy smiles despite the difficulty of her steps, which she knocked out of the park. How did they manage to stay in such great shape through all those months of lockdown? Also in top form were Yasmine Naghdi, Claire Calvert, and Nicol Edmonds as they led the troupe through the supersized version of “Elite Syncopations.”

All in all, it was an enjoyable heap of dance fragments which showcased some excellent dancing. It was also filmed well for the virtual audience. I just wish it hadn’t been marred by the too-frequent intrusions of the evening’s emcee, journalist Anita Rani. Two numbers into the evening she appeared with Kevin O’Hare, the Royal’s artistic director, for an introduction to the event. That was the only useful interlude of the night. She returned seven more times for awkward and boring interviews. Thrice she spoke to character dancers without seeming to know what a character dancer is. She also introduced backstage montage clips and made pleas for donations to the Royal. These are difficult times for dance companies, and I don’t begrudge the Royal for overtly asking for money. But Rani’s appearances were too many and bumbling, and the unnecessary prolongation of the show was frustrating. It was as if she was running a telethon instead of hosting a performance for a paying audience.

But that aside, the Royal did a remarkable job of putting on a show considering the challenges posed by the virus. No other ballet company has managed—or even attempted—anything like it. The Royal Ballet’s administration has proven that they care deeply for their dancers and the art form by mounting such a production. I hope it wasn’t a total financial loss; I’d happily buy tickets to see more shows like this, especially if they put on programs of full ballets instead of excerpts.

Next
The Future is Unwritten