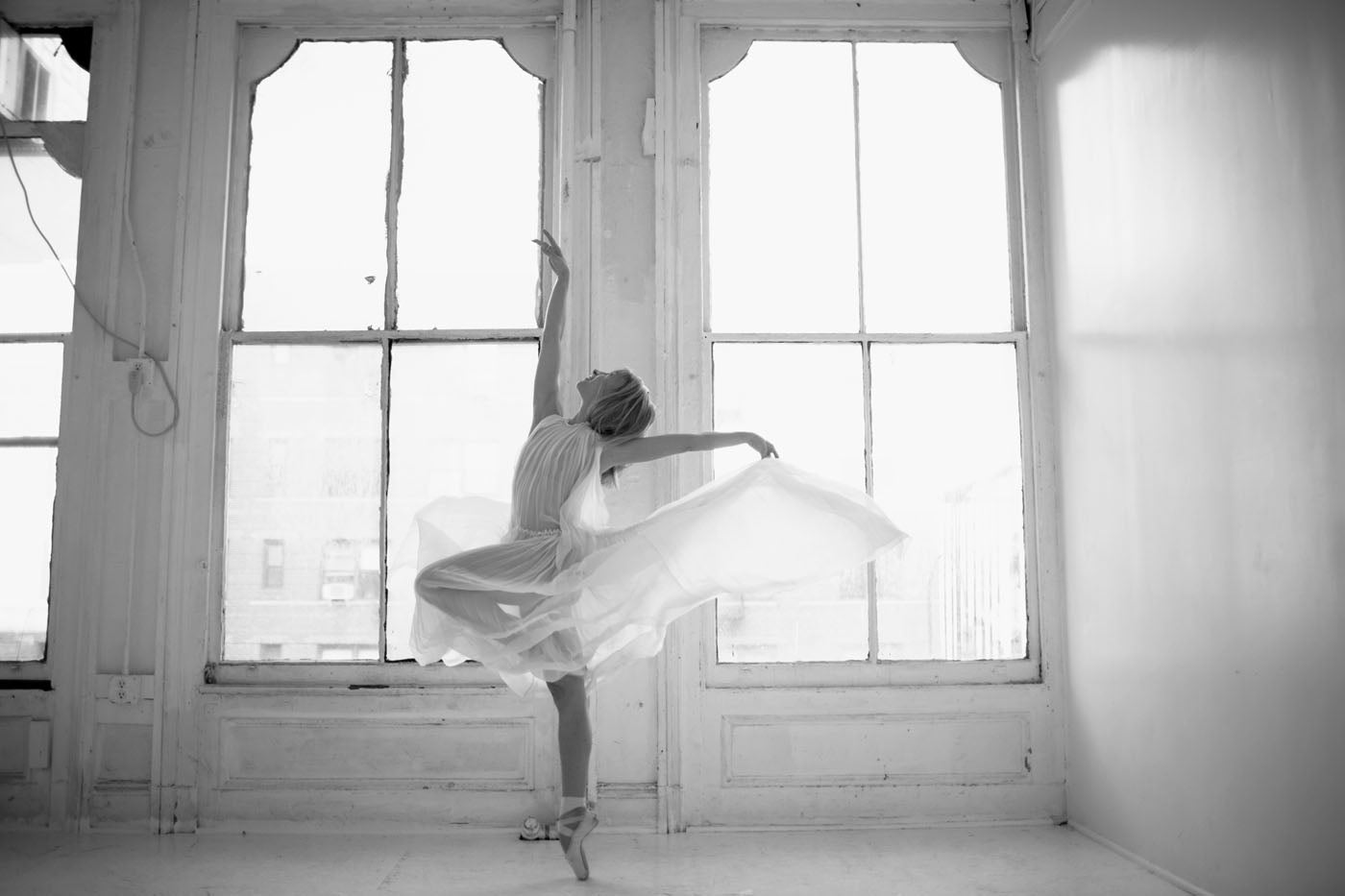 Shelby Elsbree on dance and moving on

“Why did you quit?” and “Why did you give up?” were some of the responses that Shelby Elsbree, former dancer with Boston Ballet, heard upon announcing her retirement from the stage earlier this year.

“How sad, I thought, that they chose to use those words,” Elsbree said, speaking via Skype from one of Columbia University’s libraries (talking allowed) where she is now enrolled at the School of General Studies, “because that’s not at all what it’s about.”

For Elsbree, 25, the decision to part with a 16-year-long career in dance, which saw her perform soloist and principal roles with the Royal Danish Ballet and Boston Ballet, was a conscious one, and a healthy one. “Many dancers don’t get the choice; the choice is made for them through injury or otherwise. I always dreamed of leaving at this peak point; with my body unbroken, with my mind unbroken.

“What surprised me was that that peak point wasn’t as a principal dancer after 16 years of dancing,” she admits. “But what I realised was that I had made it—I’ve danced dream roles with dream artists in dream theatres, and that’s something I can’t discount just because I wasn’t made a principal.”

Elsbree, a Florida native, is known beyond her charismatic onstage performances for her widely read blog, Tutus & Tea, which she began when she moved abroad to join the Royal Danish Ballet, shortly after graduating from the School of American Ballet. “I started it because I’m one of those people who goes to a stationary store, spends too much money and gets all excited and does one page and that’s it.

“It gave me a chance to see the light in my days, and to share it with the people that mattered to me, and who were interested in it.”

Tutus & Tea has been a space to reflect her love of the Danish concept of cosiness, ‘hygge,’ chronicle her adventures abroad and in the kitchen, and indulge her passion for photography. Lately, it has been a source of strength and support, too. In April, she shared her decision to retire in a heartfelt post that resonated not only with the dance community, but with many who connected with the transition in their own way.

“There is a kind of camaraderie that can come through sharing your thoughts, and indulging one another each others words through something as simple as a blog post.”

At the School of General Studies, Manhattan, a school set up for non-traditional students, Elsbree finds herself amongst a cross-section of dancers, actors, Olympians, military veterans and parents.

Yet, in addition to the practical hurdles of transitioning from the stage—financing education, moving city, starting over—for dancers, the stigma around retirement looms. The dancer’s identity is at stake. “I wish that there was a stronger support system in ballet companies such that a dancer doesn’t finish a seven, eight, ten-year career as a corps member and feel like they’re giving up.”

“The idea that a dancer dies twice is one that I commiserate with but also find incredible dramatic, because you have a privilege of starting a career from a very young age, and graduating from it while you’re still young.”

Instead, Elsbree chose to celebrate the occasion with four friends also exeunting, hosting a reception for family and friends. “What was funny was how our siblings connected, and were having conversations about being the sibling of a dancer, talking about all the “Nutcrackers” they’ve been to, and all the summer courses they did.”

Over the course of the year, she has been confronted with the ways in which her identity as a dancer has changed. “Since I’ve retired, I’ve been on the subway when someone is like, ‘Are you a dancer?’ which I used get all the time—it’s just the way we hold ourselves. At first I was like, well, I am—but I’m not? I didn’t know how to feel about it.

“I was talking to my sister about it, and she said immediately, of course you’re a dancer. I didn’t spend 16 years of my life to develop this posture, and stance to say that I’m no longer a dancer. So yes, I am a dancer,” she says.

The process of transition has been one of introspection, but also one of action and expression. Early in the season, before contracts had to be signed, Elsbree had a series of frank discussions with her director about her career trajectory. “I was very open and honest because I was frustrated and I had nothing to lose. That’s something I’ve encouraged dancers to harness, is not to be afraid to use your voice. We only get to speak with our bodies on stage, and sometimes, some bodies speak louder than others, and those are the ones that get opportunities.

“I’ve never been afraid to use my voice in that way, as I think it only helps. I’ve spoken on behalf of the corps de ballet many times and that was something I was honoured to do. The dancers are often young, and they don’t want to jeopardise their careers. But there’s a lot at stake—and that’s the point. When I left Boston Ballet, I said to the corps, girls, I’m leaving, so raise the volume!”

Elsbree submitted her application essay to Columbia University requesting an early response, which came in the midst of performing. “I had run back for a costume change and I saw my phone; there was an acceptance email from the University. I was sobbing of course, but I had to go back on stage. We were doing “Gaîté Parisienne” which is a hilarious burlesquey-fanfare ballet, and I went out there and kicked my legs higher than I’d ever kicked before. I thought I’m going to fall flat on my face!”

She finished the season with Boston Ballet, dancing her final performance at the end of May. In the summer, she packed her bags and moved to New York. “It was a lot of change all at once, but it was all healthy change, and change that I initiated. So if I ever felt overwhelmed, I checked myself that these are luxurious realities to be overwhelmed about.”

Now, after the flurry of year-end exams, she is conscious of nourishing her body and mind, and being attuned to living. “We get so fixed on the promotion or the graduation, and we’re always thinking of the end ideal; but the majority of our life is not those moments.”

Her connection to the ballet has too evolved, and she finds herself appreciating her new-found perspective in surprising ways. “I’ve gone to see ballets, and I was afraid initially of how I would react. I’m a total crier. I was ready to sit there windshielding my tears, you know, but it wasn’t like that at all. I was inspired, and I was touched by the fact that I could sit there and enjoy a performance truly knowing what kind of work went into it.

“New York is so full of talent. Even when I’m on the subway and it’s ‘Show Time’ and some kid is wrapping himself around a subway pole, you see performance in a very unique way when you’re a performer. It doesn’t leave you just because you stop performing.”

Nor do the performances. While with the Royal Danish Ballet, Elsbree had the honour of dancing the role of the Student in a cherished Danish ballet, “The Lesson” by Flemming Flindt. Based on a play by Eugene Ionesco, in the ballet version of “The Lesson” an ambitious young dancer falls prey to the designs of an overzealous ballet master.

“The ballet student comes to her ballet class, and she’s excited to show all that she can do. She’s ambitious and bright and bubbly, and when she gets into the studio, she shows all the positions, and that she can do the combination even before the teacher finishes showing it.

“But her foot hurts, and she takes off her pointe shoe, but the teacher keeps going. She realises that it’s going in a dangerous way. At the end of the ballet, after the pianist helps carry the body of the lifeless dancer out, you realise that the set is identical to the very beginning of the ballet. And the doorbell rings.”

Typically performed by a Danish cast, Elsbree was one of few foreigners to dance the role. She was taught the role by the original Student, Anne Marie Vessel Schlüter and rehearsed by Vivian Flindt, Flemming Flindt’s wife. “It was a pinnacle moment of my career,” she says with smile, “and somewhat ironic that I played the role of the ambitious student, eager to show what she knows.”

Previous
In the Moment

Next
A Southern Genée