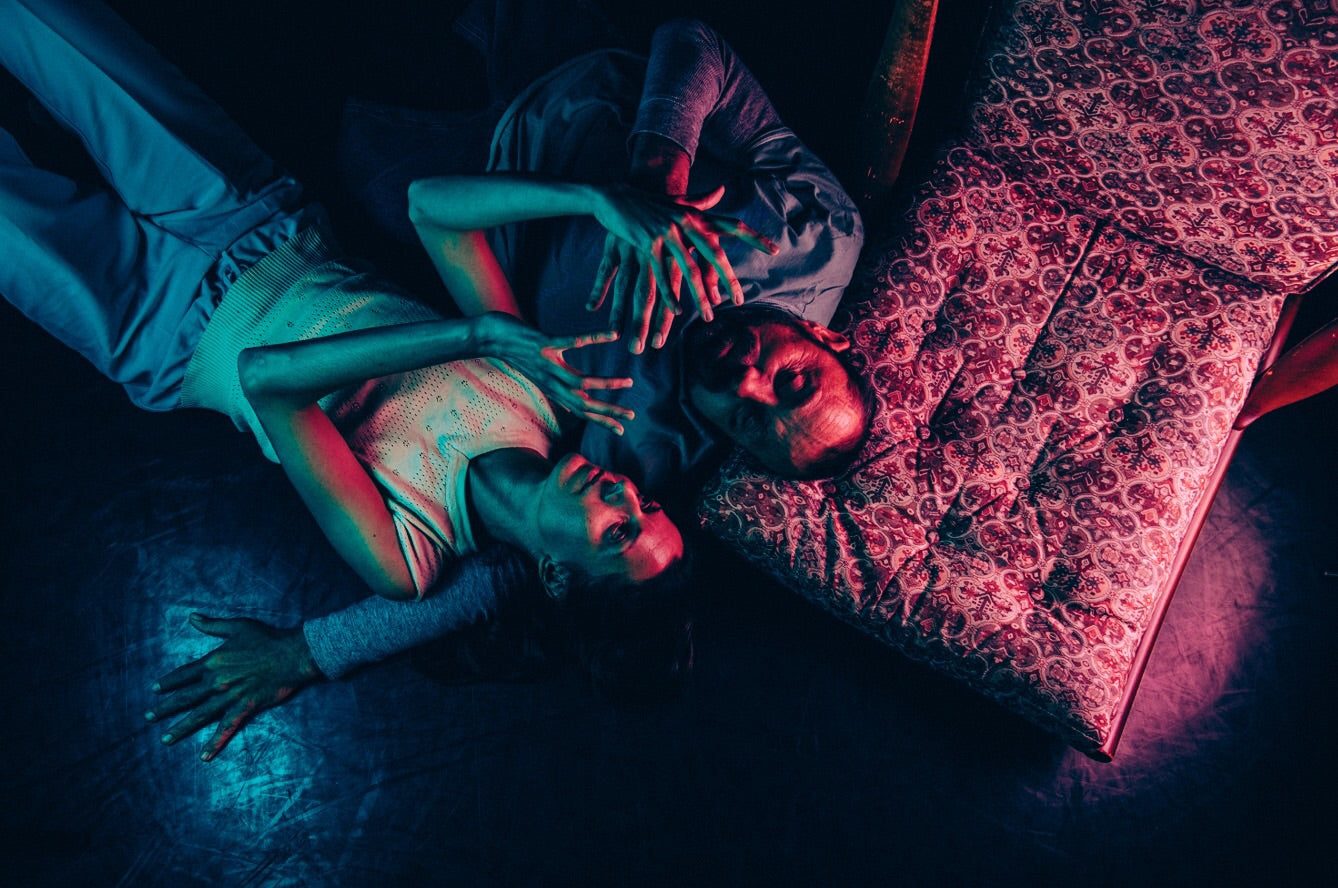 “The Enormous Room” by Stopgap

A room, its furniture haphazardly stacked. The armchair lies toppled, the door, placed flat like a table-top, is reimagined as a bed; the cupboards become miniature doorways or upstairs windows through which the company climb.

Within this disordered environment a family’s story unravels. There’s no specific narrative—instead, through recollected memories and passing vignettes the grainy image of a tragic event is formed. Piece by piece it gains clarity—the loss of a wife and mother, drawn from the emotional turmoil of the husband and daughter she has left behind.

As they come to terms with their loss we witness moments both bittersweet and tortured. Both David Toole, as the father, and Hannah Sampson, as the daughter, bring a sense of painful realism to their roles. Emotion can be read in every expression, movement and gesture they perform. The atmosphere they build is tense and tortured but there’s also a great tenderness between them.

It’s an atmosphere enhanced by the physical presence of the wife and mother they mourn, played by Meritxell Checa and Amy Butler respectively. Sometimes the duo move about the room, enacting past actions and habits through their stilted, gestural choreography; sometimes, as Toole recalls their time together, we see brief moments of interaction between mother and daughter, husband and wife.

Through this duplicate presence we are offered a glimpse into the different experience of grief for husband and daughter. It’s an original and affecting choice that subtly reflects on the varying roles one person might play in their day to day life. Among the sense of loss and frustration her presence lends the work a great sensitivity, exposing a close and caring connection between the performers.

The ability of this company to fully embody their characters is one of the great strengths of this piece but that strength also lies in its intelligent simplicity. Nothing is over-complicated and all is conducted with acute precision; from Toole’s spoken recollection of events to the company’s unadorned, but affecting movement language.

The confines of Anna Jones’ set design are equally used to great effect. No surface is left untouched—the interiors of cupboards, the space around and under the table—it all adds a fascinating intricacy to the company’s movement. As they work their way around this topsy-turvy environment the eye flits between moments and scenarios. Like the room these characters inhabit the memories we see are scattered. It creates the distinct sense of two people piecing their lives back together—as best they can.

As in life, the tension of the characters’ existence inside this room cannot be sustained. As Chock (Nadenh Poan), a playful sprite-like figure, wheels around the space, the set is rapidly deconstructed and the theatricality of the first half gives way to the abstraction of movement. The stark change takes some adjustment but the absence of the room allows for the connections and relationships established in the first half to develop.

The pathways of the company’s movement revolve around one another, their actions supportive and connected. We gain an impression of past relationships and also developing ones, such as that between the daughter and boyfriend figure Tom (Christian Brinklow). Sometimes the company dance in unison, but more often their movements fall in and out of sync as their pathways cross one another. Translated upon the different bodies of the company the choreography gains its own textures and complexities and that adds a captivating aesthetic.

Above all, it is the emotional embodiment of not only this choreography but each action and expression that makes “The Enormous Room” so compelling. In that there is a very natural humanity, a sense of experience and emotion that, on some level, any audience member can relate to. This ability to portray genuine emotion makes “The Enormous Room,” and this company’s work, profound and touching.

Next
A Given Light