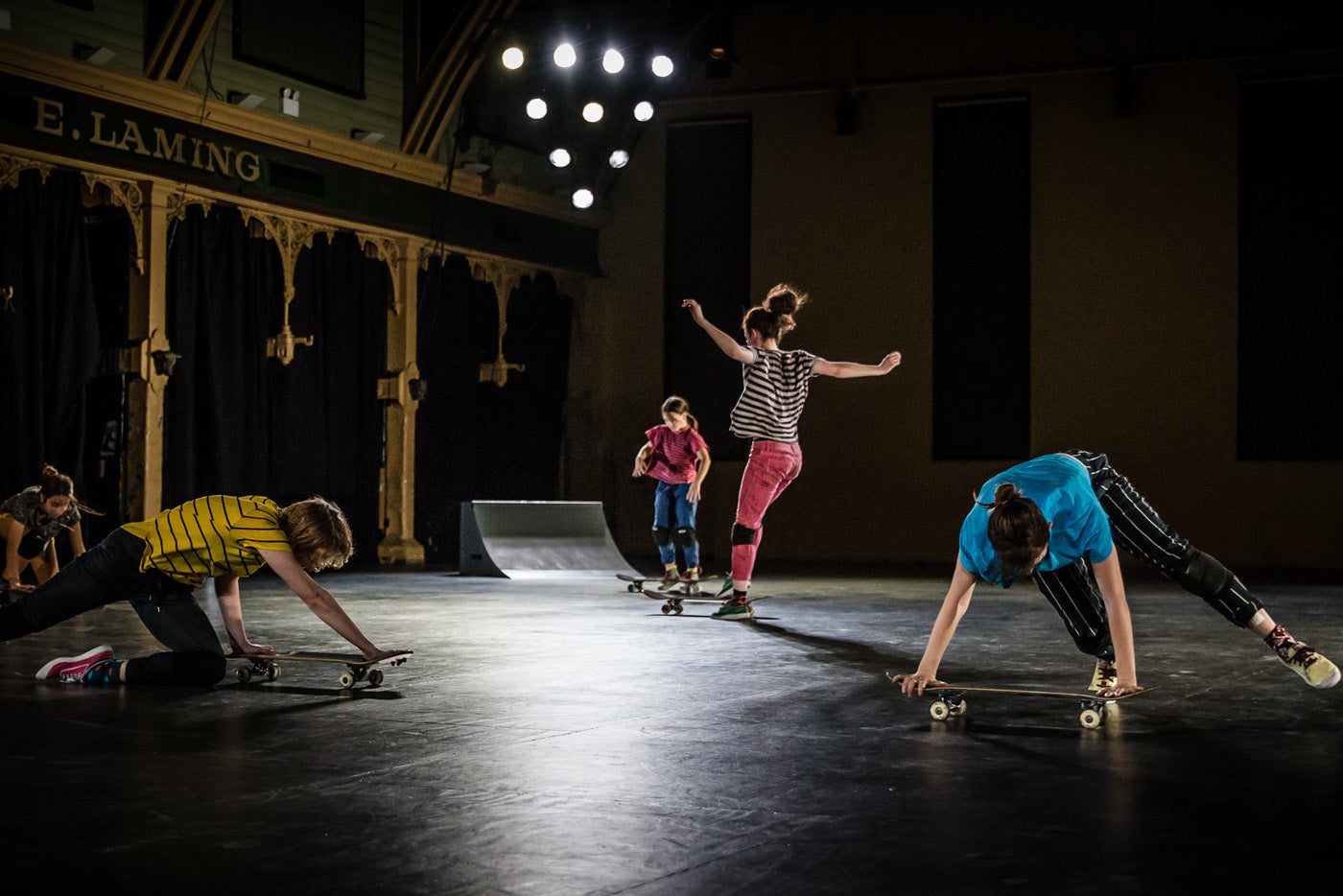 (Pay attention to what it is, just as it is.)
Each person is in the best seat

Seated in my own ‘best seat,’ frankness, humility, humour, experimentation and a willingness to question link for me Kate Champion’s “Nothing to Lose,”, Rawcus’ “Catalogue” and Nat Cursio’s “Tiny Slopes” (a work in development presented in association with Malthouse Theatre). Three performances seen recently as part of Dance Massive 2015 that, in liberal interpretation of John Cage’s words to suit my own form, have asked me to ‘pay attention to what is, just as it is.’

In doing so, I was appreciative of the intimacy and trust that the performers in all three works placed in me as I sat in the audience. Though different in their approach and finish, I responded to their candour. From “Catalogue’s” invitation to create my own composition with the material presented to Champion and Kelli Jean Drinkwater’s exploration of the movement vocabulary of larger bodies, which owing to its very nature cannot dodge body politics, I remain grateful for the questions posed. Whether they were answered or not, either during the performance or in quiet reflection in the days that followed, to me they remained open to experimentation with a good dollop of play.

“Nothing to Lose,” Champion’s final work with Force Majeure, in collaboration with artist and fat activist, Drinkwater, is about how different body shapes, with a different centre of gravity, move. It was choreographed for larger bodies, bodies that you don’t normally see on the stage and in doing so it asks: why not?2 During the performance, in one of the vignettes I especially responded to, several participants from the audience were invited up onto the stage of the Merlyn Theatre to view the sculptural forms of the performers. Under the friendly and watchful guidance of fellow performer, Julian Crotti, the participants were encouraged to touch the ‘live’ exhibits standing on plinths before them; theatre not as spectacle, but a hands-on reshaping of expectations. Can you map a person’s experience through touch? Yes. Watching the tender way in which some people did this made for a beautiful ‘duet’ or ‘non-verbal conversation.’

Encouraged to lift the skin of a belly and to feel its weight as it fell upon release or to trace their hands along the contours of the body until they found a hair and once at that singular hair to twirl it with their fingertips made for an intimate celebration of “the sculptural splendor of the fat dancing body.”3 And to anyone who has ever wanted to get up a little too close to an artwork in a gallery, it was also, on another level, a chance to delight in the unexpected. The joyous dance to classical music, with faces concealed by t-shirt fabric called to mind Jiří Kylián’s “Sechs Tänze” (1986), and like Kylián’s play, “Nothing to Lose” soon plunged us into the inevitable, balanced, darker terrain. Seeing Claire Burrows (Scarlett) throw herself at the floor repeatedly proved almost too hard to watch, as did meeting the gaze of Michael Cutrupi and Ally Garrett as they reeled off a barrage of insincere ‘concerned for your wellbeing’ type remarks that escalated to cruel taunts and insults. With the house lights on, Cutrupi and Garrett walked through the audience, recounting: “No, but seriously, what do you eat?” “But, you’ve got such a pretty face.” “Can I feed you?” “You don’t need to worry, it’s not like anyone’s going to rape you.” As Drinkwater explained at the Body/Language subtexts talk presented by Malthouse Theatre and the Wheeler Centre earlier in the month, some of the material featured came from comments left on her own Facebook page.

Demanding equal trust of its audience was “Catalogue,” directed by Kate Sulan, which took you inside the shared experiences of many of its performers from the Rawcus group. An ensemble of performers with and without disability, this work, seen on its final night, was also a celebration of humanity, seeking to “fuel dreams, accumulate questions, embrace complexity, … invite reflection, [and] challenge what is possible.”4 Presented in a simple and effective doll’s house formation of eight darkened cubes/rooms stacked in two rows, it was within each space that a rotating cast of performers let us in to their bedrooms, thoughts, and hearts. It was unavoidably personal and heartfelt, this theatrical cabinet of curiosities. But, as with “Tiny Slopes” in particular, it was not a case of watching the ‘other’, it was chiefly a case of recognizing a shared experience. Shown in moments of introspection, anguish, and play, was all that it is to human.

Notions of the private and the public self were explored, the light and the dark, and it was found that there was even room for air guitar ecstasy and the recital of Gwyneth Paltrow’s 1999 Oscar’s acceptance speech to be gloriously hammed-up verbatim. It was the sincerity of the performers and their apparent connection to each other that I responded to above all and I watched this work with a lump in my throat, thankful for the dark lighting Arts House afforded. If there was one work to reveal me to be the sensitive jelly that I am, this was it.

It is refreshing to see someone admit not to what they can do, but to what they can’t do, yet, if ever. And this is what we have, in part, in Cursio’s “Tiny Slopes.” “I don’t know how to do summer in Australia outdoors,” proclaimed one of the dancers (from memory). “I don’t know how to amalgamate all my supers,” said another. As transparency is my subject, I can tell you that I don’t know how to ride a bike; I don’t know how to deliver compliments to someone in person, not matter how genuine my intentions; and I don’t know how to ‘do summer’ outdoors either. And I cannot skate. For me, “Tiny Slopes” showed the slow learning process of all things. Learning to skate is like learning a new language or learning to paint. Learning is hard and bruises are inevitable. You fall, you stumble, and as Fred Astaire sang to Ginger Rogers in the film Shall We Dance (1937), “you pick yourself up, dust yourself off and start all over again.”

“I start with my left foot forward. I try to emulate some of that guy on YouTube…. I’m trying to, like, make some bigger strides and that seems to work. At the moment, I’m trying to be a bit smoother than I’m capable of. Yeah, I don’t like falling off or I don’t like that feeling, so I tend to… stay back, rather than push myself, but I don’t know, I’m still enjoying it.”5

Viewing the work in its unfinished state, “Tiny Slopes,” asks: is it interesting to watch girls who can’t skate? To which the only possible answer is, yes! It also poses the question of what to do when the three dancers naturally become better skaters given that much of the joy and honesty in the work comes from watching them, and in turn seeing your own self, learn something new. In an endearing display of teamwork and problem solving, a tricky stunt can be negotiated with the assistance of another pulling you along; note to self: this is true of all things. “Tiny Slopes” also looks at the tentativeness with which we throw ourselves into something the older we get. Bouncing back is not so easy and one cannot escape an awareness or knowledge of danger and risk. In continuation of own earlier frankness, I once performed a rollerskating state of extreme daredevil proportion. In my final year of primary school, I rolled down a steep concrete slope with such force that I effectively bit into the wall at the end of the ramp. I broke my front tooth clean in half and wear this injury today as a reminder to be wary. Bodies and their parts break easily and recovery is slow. I look forward to seeing where “Tiny Slopes” with all its required ‘abandon’ rolls.

“To my surprise, I found that dancers who had skated when they were children, and some of them quite well, couldn’t roller skate now because of their dance training. They froze, and it was very awkward. They needed a kind of abandon to actually do it. You see, in their thinking, dancers have an ongoing dialogue between themselves and the floor, and I had put wheels between them and the floor. They couldn’t hear the floor any more, and their muscles didn’t know where they were.”6

The collective vulnerable underbelly of “Nothing to Lose,” “Catalogue,” and “Tiny Slopes” impressed upon me a sensation of the glass being half full and for that I am grateful. Together they have formed my own perfectly “imperfect catalogue of humanity.”7

Previous
No Rest for the Wilis