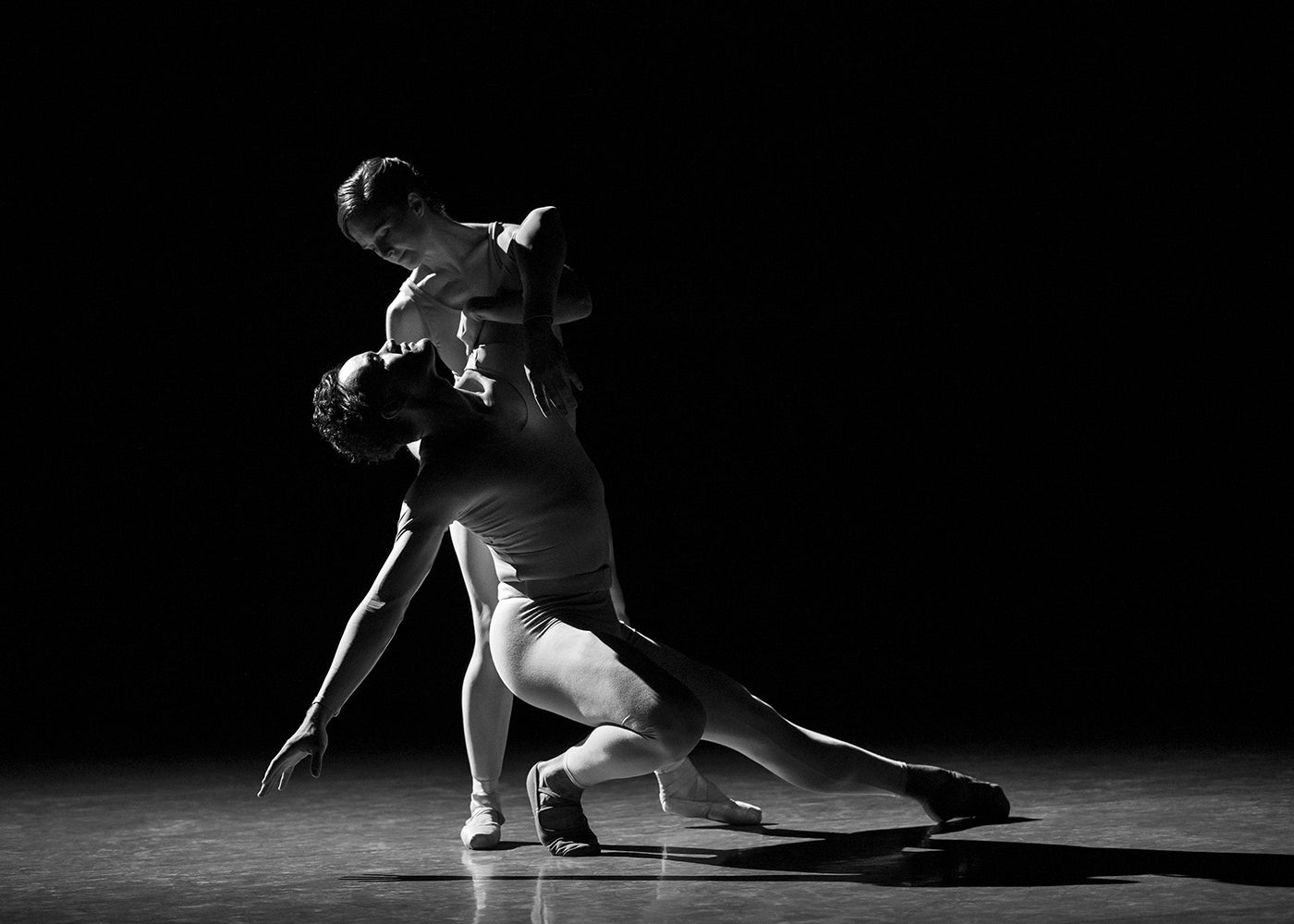 Lauren Lovette and Taylor Stanley in “When We Fell” by Kyle Abraham . Photograph by Erin Baiano
Marina Harss·
Interviews
·2

Taylor Stanley: The Space to Think

Like all the dancers at New York City Ballet, Taylor Stanley has been away from the company’s studios for much of the last year. Most of that time, he’s been in New York, where he lives with his sweet dog, Theo. The break has given him time to reflect, but that’s nothing new. Stanley is as thoughtful offstage as he is internal onstage. He dances as if he were digging toward some very deep and quiet place within. For a few years, he has been exploring different ways of moving, outside of ballet. He’s attracted to Ohad Naharin’s Gaga technique, so much so that he went to Tel Aviv to study at the Batsheva studio one summer. More recently, he has formed a particularly powerful bond with the choreographer Kyle Abraham. They first worked together in 2018, when Abraham created “The Runaway” for City Ballet. They collaborated again last summer on a solo, Ces Noms que Nous Portons, and again earlier this year, when Abraham choreographed a new dance film for City Ballet, When We Fell, which will premiere on the company’s platforms on April 8.

I caught up with Stanley recently via Zoom. What follows is an edited version of our conversation.

Are you in New York?

I’ve been here pretty much this whole time. It’s beginning to feel like spring, too, which is great. A very different kind of spring than last year.

What a year. When did you start to feel like dancing again?

I took time off from the start of lockdown until the end of the summer. The first thing I did was Justin Peck’s dance film, Thank You New York. It was wonderful to be back working with a familiar face and in a familiar language. And then I worked with Andrea Miller [of Gallim Dance] on a film that she directed and produced and choreographed called Boat, which was the film adaptation of a stage work that she had choreographed in 2016. I had been wanting to work with her more since she created a solo on me for Dance Against Cancer. It’s in line with that Gaga-based movement I’ve been interested in for a while.

You also made that very beautiful short dance film with Kyle Abraham, Ces Noms que Nous Portons, in honor of Pride Month, filmed at Lincoln Center, set to Satie. Abraham and you have such a unique connection, ever since he created “The Runaway” for City Ballet. He really captured something about you.

I do feel like he really has been able to capture something about my spirit which he’s able to translate into dance. It’s like magic. It was interesting how we made this new solo. We were in different cities. He sent me a video of him moving, which I interpreted. I sent him videos and he sent notes back. It was just me, on my own, in my living room doing my own process. We had a lot of conversations about what this video meant to us and about not wanting it to be just performative. It was the first time Lincoln Center had marked Gay Pride in that way, and there was so much happening at the time. The first thing I do in the solo is put my hands up, like “hands up, don’t shoot.” It’s real and it’s heavy.

I do feel like he really has been able to capture something about my spirit which he’s able to translate into dance.

It’s been a heavy year. We’ve had a concentrated dose of fear related to health, compounded by challenges to our democracy, further compounded by some stark realizations surrounding the ubiquity of racism and racial violence. How big a factor have anxiety and fear been for you?

You know, when I walk out the door, I am a person of color. But I also feel like when I’m walking around, I don’t carry fear in a way that others might carry fear. But it’s not to say that in these last 12 months, I haven’t recognized more how I appear to other people. And, seeing so many instances of racism and violence and brutality, I’ve developed a little bit of unease. I have a different awareness of it now. It’s not a crippling fear, but it’s an acknowledgment that I am of this group, and people in this group are looked at a certain way. And that also involves how I am in the company. The dancers of color have really come together. We’ve been able to share our experiences with each other. It’s incredible and also heartbreaking to hear people’s stories about ways they’ve been treated and ways they’ve been kind of marginalized.

So much of ballet tradition has been based on typecasting. I mean there’s even a word for it: emploi. Do you feel like there’s less of that kind of thing happening now?

I hope it is moving in that direction. I guess I can only speak for myself. Some of the things that I got to do before the lockdown, people of color have not gotten to do, or at least not often. Like the first movement of “Brahms-Schoenberg Quartet.” I advocated for myself to do that because I wanted that kind of challenge. It felt like enough of a poetic, but strong, princely role for me to step into without a story being locked into it like “Swan Lake” or “Sleeping Beauty.” It was kind of nice to have that clean slate and to be able to bring my own self. I feel like things are shifting. And maybe, in a non-egotistical way, I’m a part of that change.

Do you feel like it’s easier to advocate for yourself under the new management than it was under Peter Martins?

I think that I’ve been advocating for myself in the same way, but my confidence has maybe been more developed in recent years. I feel like I have been listened to in both eras. But that’s not the experience everyone has had.

How have the fall and winter been for you? There was so much going on in the summer, because of the possibility of being outside. But then it got cold.

For about a week in the fall, I worked with Sara Mearns, Jody Melnick, Rashaun Mitchell and Silas Riener. [Mitchell and Riener are both former Cunningham dancers.] We were rehearsing and creating material downtown at the Center for Ballet and the Arts for about a week. During that time, Troy Schumacher was already working on his “Nutcracker at Weathersfield” upstate. Sara and I were both involved in that “Nutcracker” as well. So after our CBA residency, we left the city and headed upstate to join the rest of the cast.

So you were involved in that! What was it like? You were all living together in a grand stately home in Upstate New York for about a month, weren’t you?

It was actually kind of comforting to have that tradition return in this way. But it was also challenging for me to get back into that ballet mentality. I’m so aware of the dynamic of a ballet environment and how it affects me. All those questions circling in my mind.

You’ve been working on a new piece with Kyle Abraham for New York City Ballet’s digital spring season, When We Fell, which premieres on the company website on April 8. What has that been like?

I’ll speak from my experience, which is that it feels much softer than things that we’ve seen him do at City Ballet so far. But you still know that it’s Kyle Abraham. I feel like it’s going to be really beautiful.

What kinds of classes have you been doing during the pandemic?

When I’m feeling motivated, I do a blend of yoga, or Cunningham, or Gaga. I’ll work on my college classes during the day, and then there is usually a 6pm class I can take online. And if I want something more structured, I’ll do one of the Cunningham daily Instagram Live classes, which have been so useful and so informative.

You mentioned school. Where are you studying?

I’m in the LEAP program through St. Mary’s College. I’m a junior-senior-ish. Right now, I’m taking my last two requirement courses, which are gender psych and anthropology. I really took time over the summer to bang out a lot of courses. I feel like it’s similar for a lot of dancers. Up at Weathersfield, so many people were doing school schoolwork. It was pretty inspiring.

I’m glad you’ve really been able to use this year for yourself.

This all sounds like so much. But it’s also funny how I feel so lazy and ambitious at the same time. It’s that mental cycle. Those increments of time in between make it really feel like nothing’s going on.

What are you dying to dance when you go back?

I did see that Ratmansky’s “Namouna” is supposed to go in the fall. I have no idea whether I will be able to dance it but that’s honestly one of my favorite ballets. I truly adore the music and the quirkiness of all of that movement. Of course I miss the Balanchine feelings. I’ve been thinking about “Liebeslieder” a lot throughout this whole period. My one experience performing it kept coming up like a golden memory.

What would your closer be?

Probably “The Runaway.” It still really hits home. Yeah, I look forward to revisiting that.

Next
Fragility and Fallibility