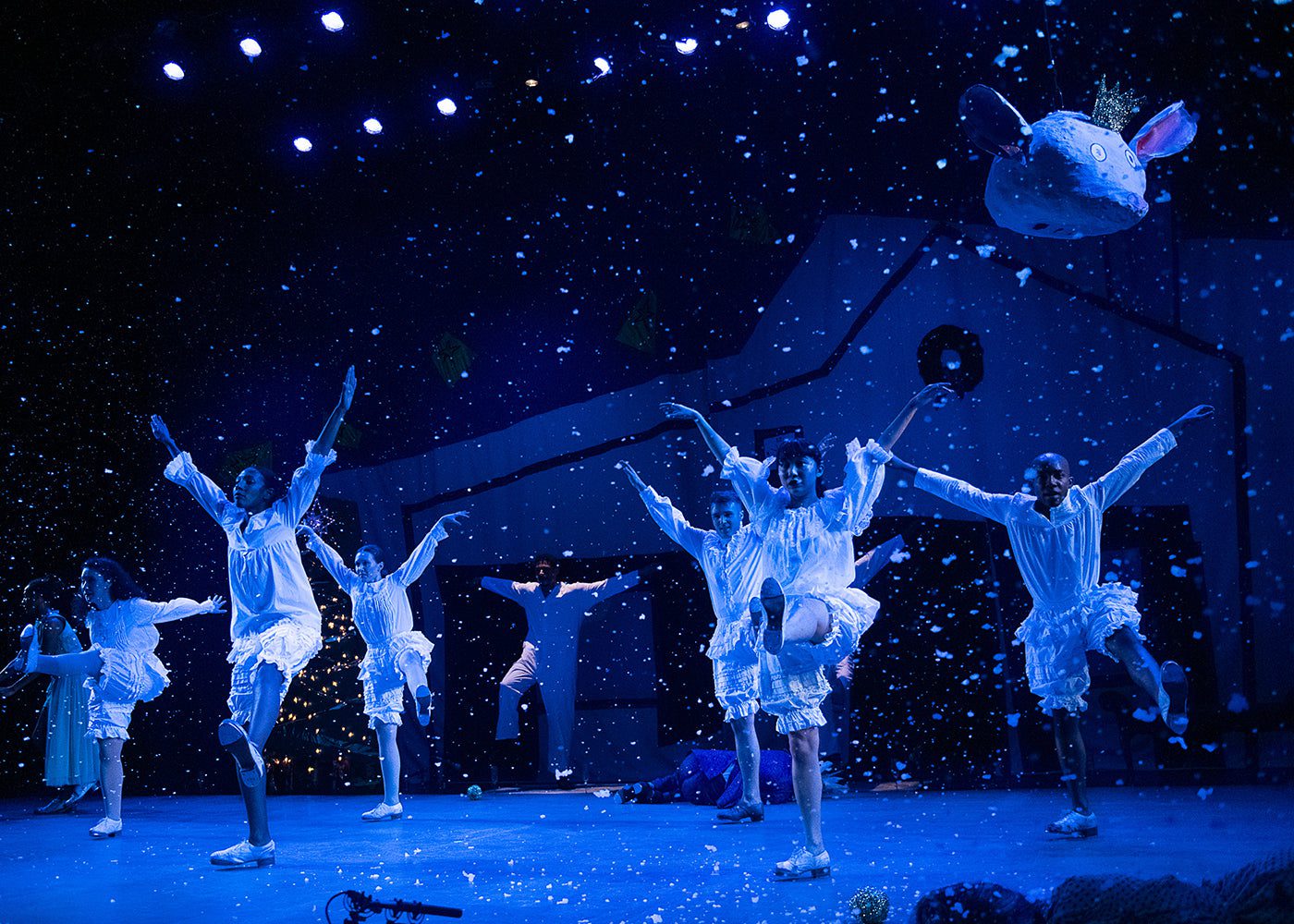 The Joyce Theater presented two festive tap shows this December: Dormeshia’s soulful “And Still You Must Swing” as well as a three-week residency by Dorrance Dance—featuring the premiere of a tap “Nutcracker Suite” to Duke Ellington and Billy Strayhorn’s funky arrangement of Tchaikovsky’s ubiquitous holiday score. Dorrance’s programming changes weekly, but each show closes with the new “Nutcracker.” This comes to 21 performances, far more than most regional ballet companies and even American Ballet Theatre (with 12). Could a tap company loosen ballet’s yearly stranglehold on this Christmas classic?

Dorrance’s “Nutcracker” certainly entertains. It opened with a swinging party filled with tap-happy adults drinking champagne and tipsily batting at a rat head piñata. All the elements of the ballet story were there, but they were pleasantly skewed. Young Clara was played with winking enthusiasm by the adult male Leonardo Sandoval. Clara’s godfather “Drossy” entered—eye patch, black cape, and all—to wah wahs in the horn section and a briefly darkened stage. His Nutcracker soldier was also gender-flipped and danced by Brittany DeStefano.

All was merry and fun, though the plot unfolded in fast-forward. It was cleverly done, but the exposition was squeezed as best as it could be to fit Ellington’s non-chronological score. For example, the dolls and party scene used his riff on the Marzipan music which usually appears about three-quarters of the way through the story. The dancing hit a high mark with the arrival of Hannah Heller as the groovy Rat King and her retinue of sharply suited rodents. Heller is a co-creator of this production, along with Dorrance and Josette Wiggan-Freund. (Main choreography credits go to Dorrance and Wiggan-Freund in collaboration with the performers; with additional choreography attributed to Heller, Ephrat Asherie, Matthew West, and Joseph Wiggan.) She seemed to be having a shimmy-shake ball as she and her coterie clawed and shuffled at the screaming guests. I laughed out loud when Drossy vanquished the rat posse by offering them a fancy cheese plate. Heller’s Rat King was felled when Clara pelted her with the Nutcracker’s discarded (and baseball-sized) walnut shells.

The lithe, radiant Josette Wiggan-Freund as the Sugar Rum Cherry reigned over the Land of Sweets in fuchsia sequins and a chic hat. A trio of backup dancers flanked her, Vegas-style, for Ellington’s languid take on the Sugarplum tune. Then her fleet-footed brother Joseph Wiggan (as her Cavalier) joined her for a tricky duet done in complete silence. The sibling duo appeared throughout the dreamland sequence—talented and gracious emcees.

The Land of Sweets divertissements were hit-or-miss. Dorrance bundled some of the numbers together to try to get them all in, and it mostly worked. Mother/6a6ywka Gingembre (Claudia Rahardjanoto) first appeared as Mother Ginger, lifting her massive skirt to reveal an army of Cossacks—deftly meshing Tchaikovsky’s Trepak with his Polichinelles. Then she doffed her dress and stepped off her stilts as the Tea music soloist. It was fine. The Flowers were a goofball hit. The hoofers sported spring green jumpsuits with massive floral headdresses of rose, poinsettia, sunflower, and hilariously lumpy hydrangea. Like cowpokes they gnawed on green stems. The vivid costumes throughout are by Andrew Jordan.

Ellington winds down his suite with the Arabian music, which Dorrance staged as a drug trip for Clara after two non-tapping Alchemists (Asherie and West) slipped her some laced coffee. It was a witty finale, for characters from each scene snaked around the stage—and through Clara’s consciousness. Like in so many “Nutcracker” incarnations, this ending implied that the evening was all a dream. At the close of the piece the stage went dark and Drossy poured a cup of gold glitter on the floor on the last note of the score—a fabulous ending.

So, could this tap version supplant the ballet juggernaut? I’d gladly revisit it yearly, but it is more of a companion piece to the ballet than a replacement. For one, it requires a thorough knowledge of the ballet’s tropes and its plotline. It is almost a Cliff’s Notes version of it. Much of this has to do with timing. The ballet lasts two hours and spans two acts. Ellington’s score is roughly half an hour, which Dorrance pads with long silent sections to get all the plot in—like the Sugar/Cavalier number. Though that dance was technically awesome, it felt a tad hollow. Big grins, sequined bustles, and soldier epaulets are a hard sell in dead quiet.

The snow scene, however, was also unaccompanied by music and it was wonderful. Two men poured sand on the floor to commence the scene, and they scraped their taps over it to make a soundscape of whooshing alpine noises. A group of tappers in white bloomers made counter-rhythms over their scraping, while white feathers wafted down from the sky. It was beautiful. This was one of the few scenes that aimed for pure magic over meta-commentary. Otherwise, this “Nutcracker” was a crafty lark, but it lacked the ballet’s transporting enchantment.

Clever showmanship is Dorrance’s forte, which was also demonstrated by “All Good Things Come to an End,” the program opener. This piece began while the audience was still being seated, with the cast’s female quartet dressed in hazmat suits (costumes by Andrew Jordan again) and sweeping and vacuuming the Joyce’s aisles—tripping up the ushers and alarming the spectators. When the show commenced in earnest the ladies flew to the stage to strip off their gear. Like in a silent movie, they set the scene with handheld title cards. They claimed to be the last four performers on earth, after some sort of fiery climate apocalypse, and they were keeping humanity’s tales alive through tap and vaudeville—all to the music of Fats Waller and Artie Shaw.

They had a stack of story titles on the cards, which Dorrance selected or rejected with a nod of her head as she disrobed. Some of the stories she rejected—like “Lolita”—were as funny as those she elected to tell: “Cane and Abel,” “The Myth of the American Dream,” “The Myth of Narcissus,” “The Ugly Duckling,” and “Pedestal.” Some of these vignettes were more successful than others, but the all-star cast—Michelle Dorrance, Hannah Heller, Melinda Sullivan, and Josette Wiggan-Freund (all equally credited for the work’s conception, direction, and choreography)—was smashing throughout.

The best of the segments was the first: “Cane and Abel.” To begin, Wiggan-Freund placed the story’s title card on an easel at the side of the stage, then smiled and did the clichéd beginner tap phrase: shuffle heel, shuffle heel, shuffle heel heel brush heel toe heel—a hysterical intro to the biblical tale of original murder. Then Dorrance and Sullivan entered, identically dressed and holding canes (hence the title card’s malapropism). At the end of a rhythmically competitive tap dance, which included a lot of impressive cane drumming, Sullivan turned her cane into a bow and shot Dorrance, who collapsed with her cane posed as an arrow through her heart.

A thunderstorm sound effect scared the pair off the stage, signaling both God’s pre-covenant flood as well as setting the stage for the next number, as the women (one of whom wore a raincoat) formed a huddled clump for “The Myth of the American Dream.” Not every number was this savvy, with such symbolically layered transitions, but when the scenes clicked, they really clicked. If Dorrance and her biting tap humor do survive the Armageddon, I’m jealous of the roaches.

Dormeshia’s program was at the other end of the tap spectrum. With minimal sets and understated costumes (by Javier Pedroza), she and her three co-stars showcased the musicianship of tap over spectacle. They were joined onstage by a fantastic four-piece band: Winard Harper on drums, Carmen Staaf on piano, Noah Garabedian on bass, and Gabriel Roxbury on percussion. The band was heavy on percussive instruments for a reason—one of the show’s main themes was that tap and drumming are kindred arts.

This concept was teased out by the interpolated appearances of guest artist Camille A. Brown—a non-tapper. Brown is a force: a renowned dancer, choreographer, and eponymous company director. In her opening solo, “Rhythm Migration,” she sat on a stool and made stabbing hand and arm movements to Roxbury’s tribal drumming. It was almost like she was tapping with her hands, so powerfully did she jab at the air. She seemed to conjure the drumming, and it felt like a cathartic release of pent-up rage. It was a reminder that the fusion of movement and cacophony is such a primal pleasure, the very foundation of dance. Brown was intense and magnetic in all her appearances, and she brought another unusual quality to the realm of tap—bulging arm muscles.

If Brown proved the transcendent power in the ability of a body to inhabit music, the rest of the cast posited that tap takes this idea a step further.  They demonstrated that tap was born from a need to proclaim one’s existence through noise. What’s better than serving as a conduit for the music? Being the music. All the tappers and musicians took improvisatory solos throughout the evening, and it was thrilling. The dancers were basically extra band members, as if they were a seven-piece kit.

I loved how Harper (on drums) closely watched the fabulous tapper Jason Samuels Smith improv, nodding approvingly at particularly brilliant rhythmic passages. Samuels Smith closed his eyes and grimaced as he performed, in what I think of as “drummer sex face.” His aim was not to smile and sell the steps, it was to create something new and interesting both musically and choreographically—to channel the muse. Ironically, Harper was too cool a cat to show similar strain when he played his incredible drum solos.

Tapper Derick K. Grant was equally great, with his own performative style. He would focus through long difficult sequences and then flash the crowd a conspiratorial grin after he finished them—utterly charming. Dormeshia herself is silkiness personified. She doesn’t punch anything; she glides across the stage. She looks unflappably smooth whether she’s doing strenuous single-legged wings or just box-stepping around. For the record, all four dancers were credited with choreography/improvography.

Brown and the tappers weren’t always playing at improvisatory one-upmanship, for many sequences Samuels Smith and Grant flanked Dormeshia while they performed complex tap steps in tight unison. At one point, with the men in suits and golden tap shoes, and Dormeshia in a black peplum with neon sequins, it felt like a supper club revue. It was classic tap at its very best. “And Still You Must Swing” was by turns probing and bold, yet it too offered up a solid dose of glittery holiday magic.

Previous
An Icy Blast from the Past