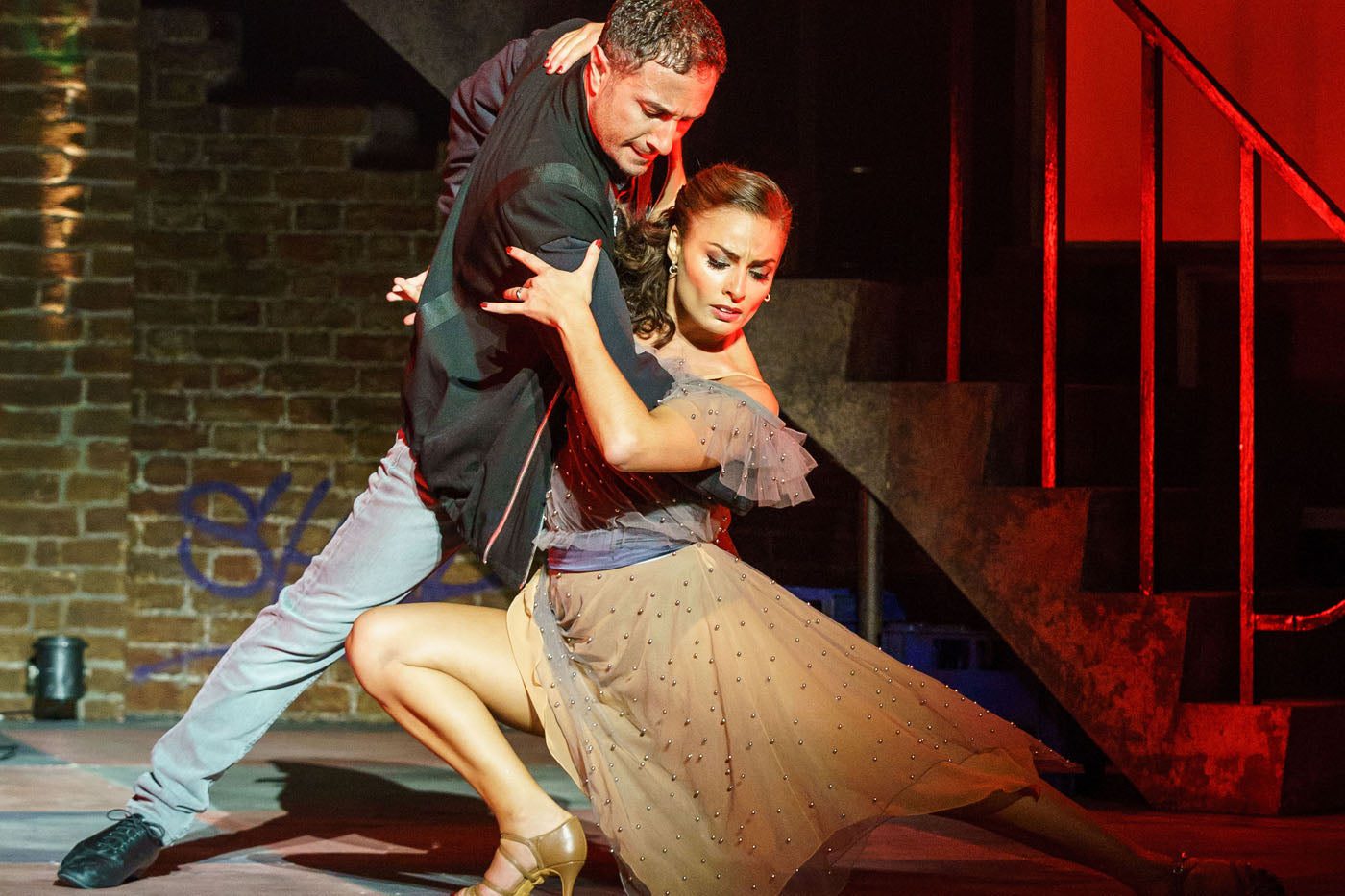 Has there ever been a sexier dance than the tango? From its origins in the 1880s in the River Plate, the border between Argentina and Uruguay, through the slums and bordellos to ballrooms—becoming a worldwide phenomenon during the Depression and extending far beyond the jazz era—its legacy still endures. It’s simply a classic genre, because its romance, fire and passion are timeless.

For over twenty years, tango champions Flavia Cacace and Vincent Simone have been making dancefloors sizzle. “Tango Moderno,” following on from huge successes like “Midnight Tango” and “Dance ‘Til Dawn,” is structured around little short sharp vignettes, which emulate the staccato tango rhythms of jerked heads, torsos and kicking legs.

Director and main choreographer Karen Bruce’s central thrust of the show is alienation—the isolating big city, where people go to find themselves, only to become even more lost: as lonely in crowds, as at home. The narrator Tom Parsons (from the Bowie musical “Lazarus”) is like an omniscient leather jacketed beat poet, introducing the chapters in rhyme as ‘rebranded two handed moderno’ and singing the eclectic songs, alongside torch singer Rebecca Lisewski—although Ed Sheeran’s “Shape Of You” is undoubtedly becoming a musical cliché on stage at the moment.

Meanwhile, Cacace and Simone act like mischief making Cupids to the energetic young ensemble with an aphrodisiac dust which they blow onto them. It’s generally playful, with a lightness of touch, but has moments of poignancy.

One sequence finds the company portraying commuters to Nina Simone’s “Sinnerman.” The audience is privy to individual inner monologues, a la Wim Wenders’ classic European film Wings of Desire—all sway in sequence, sharing mutual space; all are utterly alone with their hopes, fears, and in some cases, a pressing need to pee!

The amusing “Blah Blah Cha Cha Cha” is a cheeky nod to millennials and their constant need to be glued to smartphones, yet ignoring each other in real life—even when hanging out in bars.

Another lovely moment finds Cacace and Simone move together like liquid honey, seemingly oblivious to the chaos of the urban shapes thrown around them. In hold, they appear untouchable—an almost ghostly presence from the 1940s, immaculate, otherworldly mannequins preserved in aspic—possibly a metaphor for the timelessness of tango.

A cheeky sprightly foxtrot, sassy salsa slinks, a feather-light Viennese waltz in which Cacace seems to fly—there is nothing at which the duo can’t excel. Their pulpo (octopus grip) and gancho (hooking the leg around the partner’s body) moves are the very epitome of Argentine sensuality, responding to the extraordinary live gypsy violin by Oliver Lewis, and it’s here that the auditorium is absolutely silent, seemingly inhaling as one as they slide in and out of abrazo (embrace) utterly transfixed by Cacace’s spellbinding isolations and complex lattice footwork.

Bruce’s most inventive choreography occurs when the cast address the vagaries of dating: they are transformed into a living, breathing Tinder app framed in a giant keyboard. All are hugely idiosyncratic and unsuitable (swipe left, quickly).

Another witty interlude is kitschy and camp in the extreme: playing washerwomen and macho men, the cast flounce and strut around with mops, rubber gloves and power tools, performing gender stereotypes, only to meld together and be swept off in shopping trolleys and garden wheelbarrows. Almodóvar would surely approve—it’s both pointed, and ridiculous. And were there any danger of too much heteronormative coupling, a male dancer is left alone to fend with twin babies, as his girlfriend sashays off with another woman.

But of course it’s Cacace and Simone who are the main focus here—whether gliding seamlessly as one entity, or sending themselves up (she’s inscrutable; he’s a feckless lothario). They are hypnotic, and it’s impossible to resist. It may be snowing outside, but in here, the temperature soars. A tongue in cheek triumph.

Next
Stars and Stripes