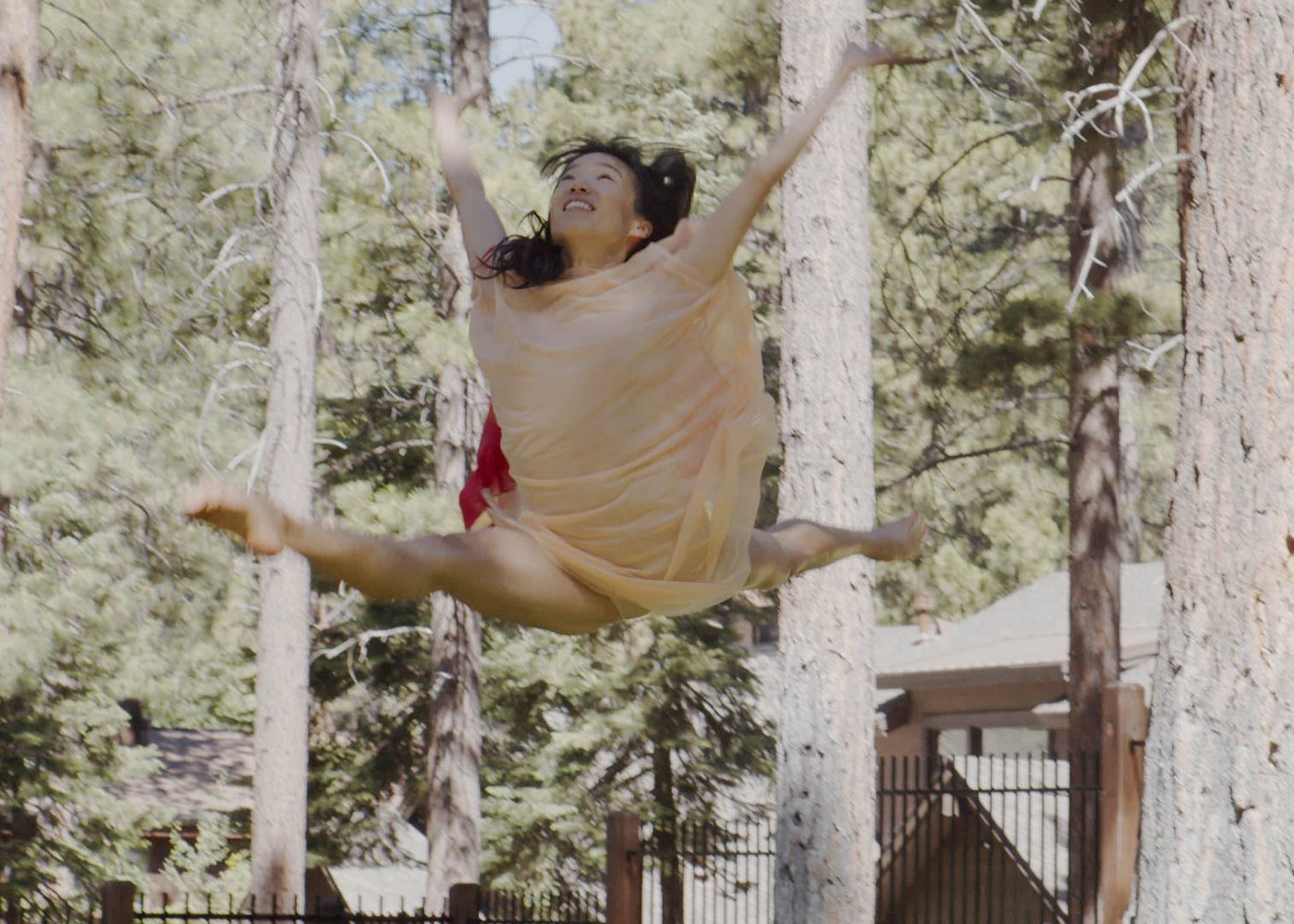 A recent Dance Data Project survey reports what everyone in the ballet world knows: Women are grossly under-represented in ballet leadership. Just one of the top 10 largest ballet companies in the U.S. is led by a woman, and only 30 percent of the top 50 companies are. Retiring ballerinas, we know, are far more likely to become ballet mistresses and school faculty than artistic directors.

Subconsciously, until last month, I had imagined this fate for San Francisco Ballet principal Sarah Van Patten, too. But the void of the pandemic presented both challenges and possibilities, and Van Patten—preternaturally self-possessed since she debuted in the role of Juliet at the Royal Danish Ballet at age 15—rose to meet them. Last summer, sheltering in place at her family’s vacation home on Lake Tahoe, she invited a cohort of dancers to get Covid tested and join her in a ballet bubble. (They followed a doctor’s Covid safety counsel.) She asked the eminently established Dwight Rhoden to work with her group over Zoom, and engaged the emerging choreographer Danielle Rowe to lead creative workshops. She commissioned a new pas de deux from rising talent Andrea Schermoly. Then, as the feasibility of live gatherings appeared on the horizon, she reached out to Classical Tahoe, an impressively run and strikingly moneyed festival presenting international caliber concert music on the Tahoe’s north shore since 2011. They said certainly, we would love to have a new endeavor led by a San Francisco Ballet star debut on our stage. And so on a warm and smoky July night (climate change is definitely felt here in the Sierras), Tahoe Dance Camp was born.

The gala-like evening revealed what should be a surprise to no one: Like other ballerinas who have created their own opportunities for artistic leadership in recent years, Van Patten has an abundant ability to step off the stage and into an executive role. This was an unforgettable evening, brilliantly curated, sparklingly danced, and impeccably produced.

A constellation of factors made the night exceptional. The venue was intimate, an outdoor pavilion holding only about 340 viewers. The music was mostly live, led by music director Luke Ming, a frequent guest conductor for SF Ballet. And the dancers themselves were practically bursting out of their skins—this was the first time many of them had performed for a live audience in 16 months.

The programming was well chosen for a proximity that showed off the dancers’ superhuman ability to marry risk-taking and precision. The most astonishing offering was from Frances Chung and Wei Wang dancing Helgi Tomasson’s “Chaccone for Piano and Two Dancers,” a piano ballet that tends to get swallowed in space when performed on the vast opera house stage. At the pavilion, it was possible to see up close the spring and stretch of Chung’s extraordinary pointe work, and the physical daring of Wang’s leaning torso as he cantilevered a yearning balance and then snapped into mind-bogglingly complex variations on attitude turns. SF Ballet’s usual house pianist Natalya Feygina played Handel’s Chaconne in G Major with a crispness to rival the mountain air.

Benjamin Millepied’s “Appassionata” is another piano ballet (to Beethoven) that feels distant at SF’s War Memorial Opera House; in the Tahoe pavilion, as danced by Jennifer Stahl and Ulrik Birkkjaer, it was almost embarrassingly intimate, though also somehow innocent, a bedroom romp culminating in a delirious kiss. Stahl has always been a leggy standout with technique to spare, but in recent seasons what moves me is her emotional immersion. Then again, it would be easy to fall in love with Birkkjaer, whose eyes are wide and generous. This coupling also exuded easy chemistry—but with an urgent edge—in the “Amazing Grace” pas de deux from Dwight Rhoden’s “Testament;” the music sung live by a tightly rehearsed septet made all the difference.

Also in the intimate contemporary vein was the pas de deux from Christopher Wheeldon’s “In the Golden Hour,” and it was mesmerizing to see Van Patten up close in the role she originated, both she and partner Luke Ingham moving with the slow-motion intensity of Butoh dancers. But just as compelling was the Act II pas de deux of “Swan Lake,” the obligatory selection I frankly tire of seeing at galas. How to make it fresh and genuinely embodied? WanTing Zhao, promoted to principal at SF Ballet two years ago, did it. I would even say she was one of the best Odettes I have ever seen, never for a moment relying on the perfection of her arabesque line, but stretching with genuine feeling and musicality even into the final pose, exquisitely partnered (and beautifully lifted) by Ingham, whose Prince Siegfried is of a muscled and unpretentious variety.

From that 19th century iconography we swiveled to the freewheeling graspings and grapplings of an Alonzo King duet, “Epilogue for Keeps.” Two stars of King’s LINES Ballet, Adji Cissoko and Michael Montgomery, gave it heart-laid-bare vulnerability. It was an inspired contrast—authenticity in ultra-formal, then ultra un-formal choreography.

And what of the two world premieres? Neither new work burst onto the scene as a major achievement, but neither felt safe, and that gave the evening crackle. Schermoly, who had a hit this past summer with her filmed version of “Rite of Spring” for Louisville Ballet, devised a duet of busy arms for Van Patten and Wei Wang to a movement from Grieg’s Piano Concerto in A Minor (one of the few selections heard recorded). Costuming hindered: Van Patten wore a baby blue tunic and swimsuit-like bottoms, and Wang wore a discordant navy covering his full leg, neither contrasting nor coordinating, and obscuring the choreography.

Meanwhile, costuming was the fabulous hit of Danielle Rowe’s new “And It Will,” which closed the night. Emma Kingsbury devised swingy and psychedelic trackpants and dresses, black-lit to Day Glo perfection by lighting designer Jim French. Jahna Frantziskonis, awash on ocean sounds and apparently worried about her place in the cosmos, slow-danced her way into a reverie with four of San Francisco Ballet’s spunkier, younger talents: Thamires Chuvas, Anatalia Hordov, Nathaniel Remez, and the dripping-with-charisma Cavan Conley. Their group party vibe was endearing, but the groovy movement suffered a surprising stiffness from Rowe’s baffling decision to have the women en pointe. Ah, well. No harm done, and a meaningful moment created: This was Frantziskonis’ final performance (her retirement as a SF Ballet soloist was announced last month), and she turned touchingly teary during the applause.

Van Patten is 38 years old, with two young children, and as she looks ahead to her 20th season with SF Ballet in the spring, she is already openly eyeing retirement. I frankly think she could perform powerfully for another decade to come, but it is also thrilling to see these new commissioning and producing talents of hers emerge. She is joining the likes of Wendy Whelan, Ashley Bouder, and Sara Mearns in claiming for themselves executive powers the big ballet companies don’t fast-track them for. As she announced from the stage pre-performance, Van Patten is determined to hold another Tahoe Dance Camp residency, and to see where this can go. She has already succeeded.

Next
Lana Jones Gives Back