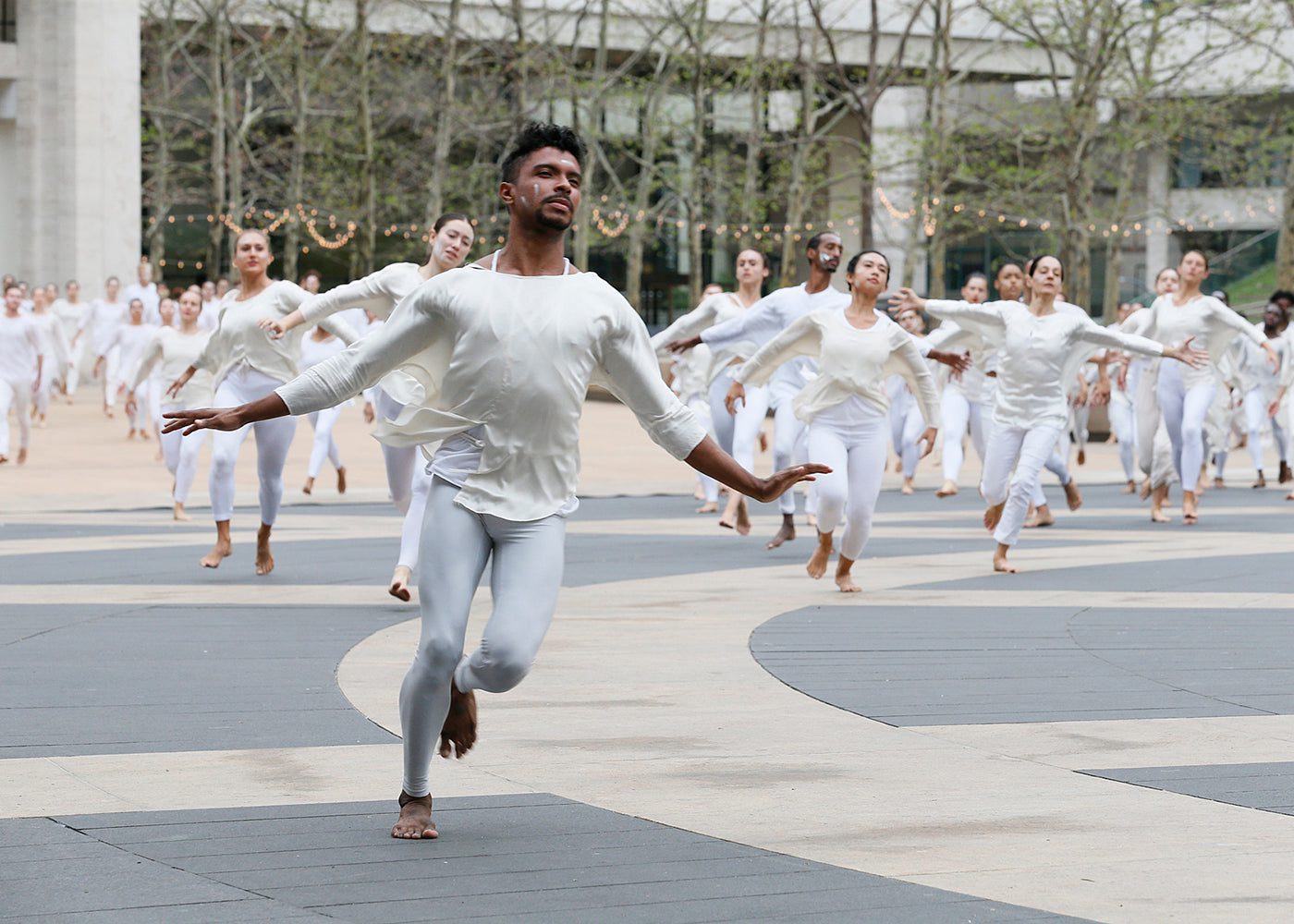 Dancing for peace in the Table of Silence Project

At dawn on September 11th, the Josie Robertson Plaza at Lincoln Center was quiet and still. Only the fountain glistened in the subtle light of morning, and the tan and gray stone ground was cool to the touch. All of a sudden, at 8:15am, the stone began to heat up. The sun had risen, but the warmth was coming from somewhere else: A call was made from a pink conch shell whose sound expanded into the atmosphere and summoned a hurricane of white to encircle the plaza. Hundreds of bare feet dashed around and around the fountain, surrounding the space and transforming it into sacred ground.

In my first rehearsal for Jacqulyn Buglisi’s 11th annual Table of Silence Project, which began in 2011 to commemorate the 10th anniversary of the terrorist attacks on New York City’s Twin Towers, I had my eyes closed when I should have been looking. Every rehearsal started with breathing together: Standing side by side in rows facing forward, the dancers would press our palms together and center them to our chests, inhaling slowly for eight counts and then releasing both the breath and the arms for another eight counts. It’s very relaxing, and the first time, I closed my eyes, enjoying the calm and serenity that was taking over my body. “Don’t close your eyes!” Ms. Buglisi bellowed to the group. “You must be awake! This is the most important moment of your life—this, the present moment. You must be very awake!” My eyes jolted open.

The Table of Silence Project is a ritual of 100 or more dancers who move together for peace. It begins with that rush onto the plaza, dancers running in our white clothes and surplices and then breaking off into gestures of hope, prayer, anguish, and friendship. At the chime of a bell, we separate from each other, about half of the dancers in rows on one side of the plaza by the Metropolitan Opera, and the other half in rows facing in from the street. Two Buddhist monks bless the fountain and then, with the sound of a bass drum, the dancers re-enter the plaza, stepping in unison and breaking off into three concentric circles, which mirror the pattern of the plaza floor. With each step is a gesture repeated ten times and there are twelve gestures.

We started learning those twelve gestures in the first rehearsal, too, and it was difficult for me, initially, to remember the order of them. They are not complicated gestures, but they are precise, and remembering which comes after the previous can be a challenge, in addition to counting each decade while trying to maintain the beat and the unison. The actual steps can be a challenge too, because they are not just ordinary steps. Each step is from one foot to one foot, with the moving foot hugging the standing ankle in a parallel flex before extending and stepping on to itself. “Sole of the foot to the soul of the earth,” Ms. Buglisi would say. In other words, feel where you are stepping and stay there, decide to be there and do not waver. “With each step, you make peace,” she said. But it’s easy to lose your balance.

This sequence is followed by another set of twelve, a series of movements that still follow around the circle but are larger and which change facings from inside the circle to outside, and back again to inside. The focus of these motions, for the dancer, alternates between down, up, and out. There are two lunges where the dancer extends one or both arms forward as if to help somebody up. There is not a moment in this sequence where one is reaching toward another who is actually down, but in rehearsal we practiced it like that because it is different to pretend to reach for someone and to really reach for someone. When you pretend, the position is fixed, and it becomes passive. When you actually reach for someone, your whole body is active and engaged, from the heel of the back foot to the very tips of your fingers.

This part is followed by four sets of bourrées. The middle circle faces inward and travels to the left, while the outer and inner circles travel to the right, turning the giant wheel. Next comes a surprise. Cleverly buttoned into the back of our surplices is a handmade ceramic plate by the visual artist Rosella Vasta. With another chime of the bell, the dancers turn to all face in the same direction, and with every other person stepping forward to meet the back of their partner, carefully reveal the plates. Each couple turns, and the remaining plate is withdrawn. We turn again and reach the plates up to the sky in offering. We circle our right leg behind us and sit to the floor with the plate held preciously in our laps.

There is the moment of silence. The dancers sit still for several minutes gazing inwardly and down towards the plate. Of course, nothing is ever really silent (though we often fail to listen), and as we sat quietly, we began to hear voices that trailed over and between us. A few singers and instrumentalists walk through the spaces left by the circles. Spread out in the vast outdoor space, it’s hard to sing in unison, so instead they call and respond to each other, at moments overlapping as one voice is sustained by the other in echo. Ms. Buglisi repeated many times in rehearsal a quote by Maya Angelou: “I come as one, but I stand for 10,000.” Only then, silent, and focused inward in meditation, did we begin to hear those for whom we stood.

When this solemn moment was ended, the final phrase of the piece began. This last one has no rhythmic cadence to follow and it only has one chime to signal the first change. It is a phrase that stays on the floor and it is done together. You can’t anticipate each change of movement, because one move will affect the entire group. You can’t fall behind, either, even if you have a particularly gorgeous shape that you would like to hold. The phrase only occurs through an acute awareness of the other dancers around you, all 100 or more. You have to listen to the breath of those around you; you have to see each other.

Ms. Buglisi, along with her collaborators and dancers (whom she refers to as “peace warriors”), created a true requiem. It is a ritual, complete with sacred garments, song, meditation, and even a communion. I think it is natural, at least for me, to want to shy away from such a thing: to withdraw when presented with the task of being silent while keeping your eyes open and moving in repetition to the point almost of hypnosis. To call something—anything—sacred, and then to take that seriously. I must confess that there were moments where I was unsure of what exactly was happening around me and to me, being right in the middle of such a ceremony, and moments where I was even afraid of it. But Ms. Buglisi would say another thing, another quote, this time from Rilke’s Book of Hours, Love Poems to God.

Previous
Ballet West in the Garden

Next
You Just Had to be There