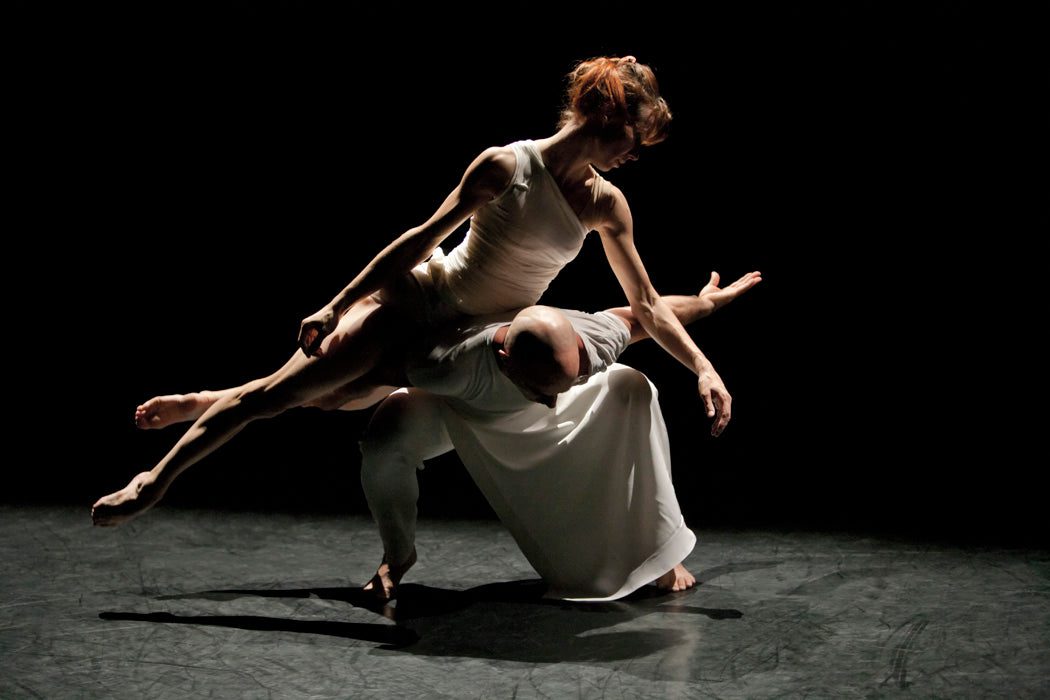 There are few dancers who can reconcile vigour and grace as seamlessly as Sylvie Guillem, she of Paris Opera and Royal Ballet fame. The French superstar teamed up with the acclaimed Russell Maliphant to create “Push” back in 2005, and nine years, dozens of performances and a handful of awards later, the programme feels fresh as ever as it returns to London for its final run.

Guillem and Maliphant’s alliance initially raised a few eyebrows, and understandably so: the former’s sky-high leaps and classical lines are legendary, whereas the latter has long favoured a grounded style marked with yogic shapes and calm comportment. “Push” quashes any scepticism as to their artistic compatibility early on, however, imparting a clear-cut reciprocity in which Guillem and Maliphant not only tender their own strengths but mine each other’s. The give and take is adroit and organic, and aligns their respective aesthetics beautifully.

“Solo” is the first of the bill’s four pieces and celebrates, among other things, Guillem’s marvellous flexibility and speed. These feats play out against a backdrop of peach hues and slinky Spanish guitar strings, Guillem’s tiny frame silhouetted in the warm glow of Michael Hulls’ lighting design. The choreography is fluid and the pace mellow—even at its apex, when a flush of azure hues ushers in a regal tone, it never feels frantic, despite the uncanny swiftness with which Guillem approaches her tilts and whirls. The flamenco-accented choreography is a real treat, juxtaposing cocky flicks of the foot against the lithe linearity of classical attitudes and arabesques.

“Shift” sees Maliphant reprise a performance from 1996 that’s only technically a solo: three shadows of his person are projected on the back screen, stretching and twisting alongside him as he cuts a series of bowed shapes across the stage. These avatars shrink and magnify accordingly as Maliphant moves up and downstage, and at times meld into one, a lone partner to echo the serene pliancy of the flexing and turning at hand. The perfect sync between Maliphant and his shadows is wholly gratifying, as is the organic progression of his choreography, which almost feels improvised in its instinctive shift from one shape to another.

Guillem returns for “Two,” an electric solo performed entirely within a small square of light pooled in the middle of the stage. Carys Staton recently performed this role in Maliphant’s “Still Current,” delivering a brisk buoyancy teeming with heart. By contrast, Guillem brings a weightier, more vigorous dynamic to “Two,” thrusting rather than swimming, slicing instead of sweeping. The piece is wildly different in tone from the “Shift”—frenetic, edgy, pulsing—and proves the perfect showcase for Guillem’s control and fierce mien, what with its speed and precarious balances. The lighting design fuels this sense of fervour, leaving flickering beams blazing in the wake of Guillem’s windmill arms.

Finally the two dancers converge for “Push,” an intimate, hypnotic duet brimming with lyricism. From the offset Guillem and Maliphant establish a physical dialogue and proceed to craft it into a rich conversation, one that swirls through a bevy of emotions—bliss, melancholy, content. The programme’s first three pieces leave no question as to the dancers’ individual capabilities, but together their strengths appear insuperable: he breathes life into her, and she in turn projects this vitality outward, pitching forth a galvanising verve through the tips of her outstretched fingers and toes. The choreography—which marries ballet, modern and a dash of acrobatics—is substantial and symbiotic; rare is the moment when Guillem and Maliphant aren’t touching or sharing weight. The lighting and music are likewise robust, rounding out the holy trinity Maliphant does so well. Andy Cowton’s score swerves from wailing vocals to warbling piano keys and haunting violin strings, and Hull’s lighting design follows suit, radiating mellow shades of blue that later bleed into a tense crimson haze. It’s drama without the theatrics, and it’s done very, very well.

Next
Something different, something new