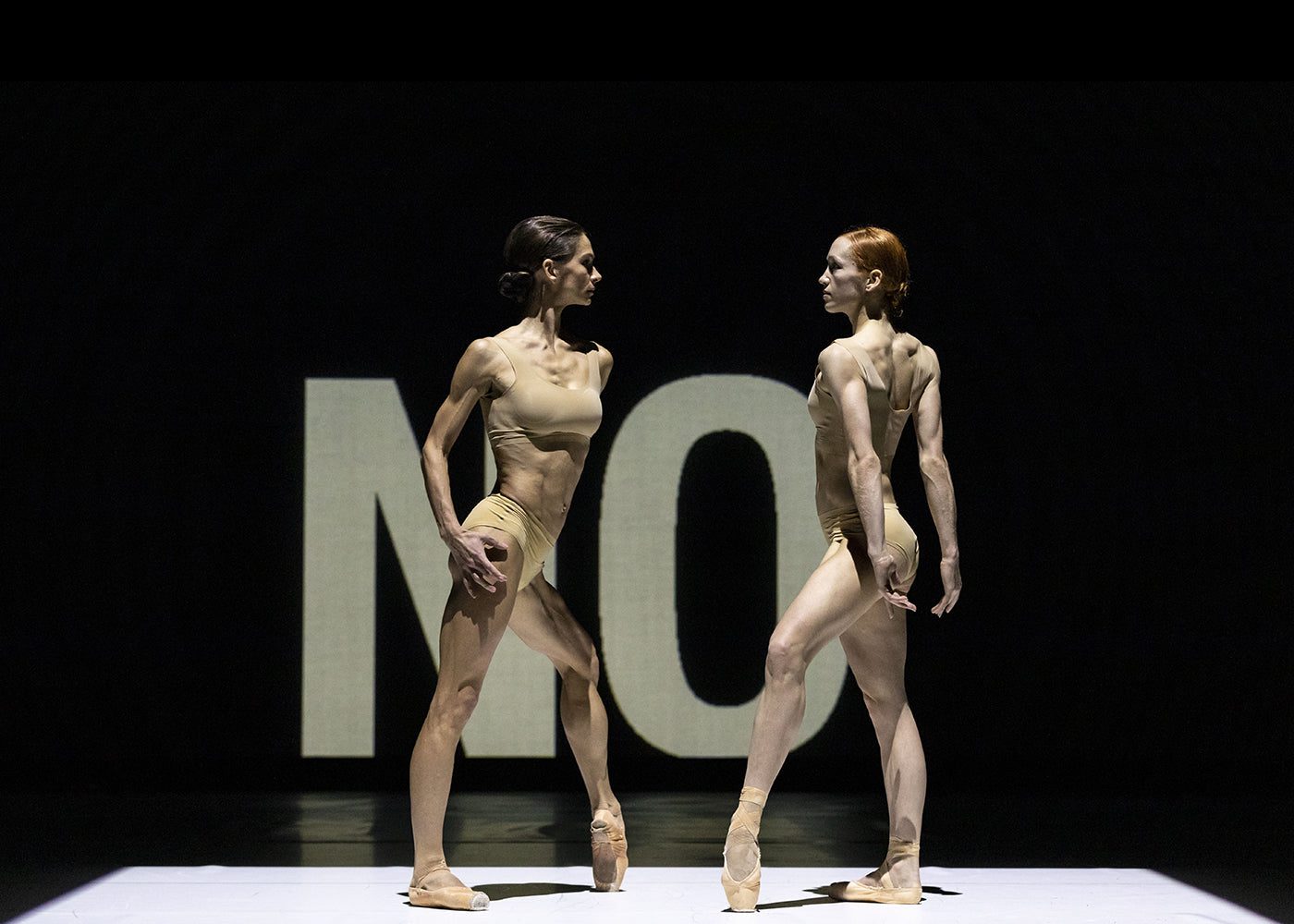 A Show of Strength

There were high expectations for Staatsballett Berlin’s double bill featuring two well-known choreographers, Alexander Ekman and Sharon Eyal. “Lib,” which stands for Liberty, by Alexander Ekman is a collaboration with hair designer and artist Charlie Le Mindu: In fact, the evening opens with a man wearing a long vertical wig on his head, seated in the auditorium, while the spectators take their places. The performance has already started but only some realise it. He slowly and casually moves towards the stage and once there he entertains with some foolish movements and poses. Then, one by one, four graceful dancers enter the stage to warm up virtuosically. Two dancers face each other, compulsively communicating through motions, and appear as ‘frenemies.’ They keep performing long, stretchy, strong and elegant movements that paint the horizon with marvellous lines until a blonde hairy being abruptly enters the stage. The ballerinas, now puzzled, observe him as an odd outsider before leaving him behind. The hairy creature performs his own energetic solo, and although the movements are recognizable, they are entirely enveloped by the bizarre costume. The solo is followed by the quintet wearing various forms of whole-body wigs of human hair. The colours are earthy and the movements are humourless despite the costumes.

These are not quite coups de theatre; still the idea of looking at ballet dancers completely covered by human hair is quite peculiar. The question that arises is, if we didn’t know that this piece was choreographed by Ekman, would it have been so well received? The standing ovation of the audience at the Staatsoper in Berlin made it clear that it was enjoyed and strongly praised. The wigs are, of course, artistic and very special, yet the minimal set seemed austere. The balletic line is obscured by the elaborate costumes, which make one think of animals such as mouflon or bison. Perhaps as a reminder of our evolution? A vision of a new nature of beings? Or a parody of the classical ballet costumes and forms? We know Ekman for his audacious and extravagant choreographies and set design, but “Lib” is a departure from his recognisable and effective style. At the same time, assuming he wanted to choreograph something different, it is admirable to witness his daring and this leap into something quite odd and enigmatic.

Trepidation, loneliness, strength and resilience are the four characteristic that dominated the stage during “Strong” by Sharon Eyal. “Strong” is easily recognized as an Eyal work, with her signature movements and distinctive music: Techno alternated by drum and bass as the lights and movement project an ecstatic experience. The group is composed by seventeen mesmerising dancers. The punctual rhythm and the execution of the piece are remarkable; the long-lasting resistance and strength of the dancers, simply outstanding. The group mainly dance in unison but there is always someone who steps out from the crowd stretching the limbs, twisting, curving and contracting as though possessed by an irrepressible force. It is like watching a diligent group of scholars moving together, while suddenly one stands out of the group and radically disconnects from the others leaving for another mental journey. There is a constant sense of urgency that pulsates as though a marathon or a march to reach the finish line. The frenzy is palpable while they move together, but it is always very controlled. As an organism that functions as one, it looks compact, strong and indissoluble, to shortly dissolve before gathering again.

At moments the dancers appear as a series of solid magnets that attract each other, and getting closer, increase their force. The edgy movements constantly on relevé look strenuous but light and smooth. There is sparkle but also a sense of desolation. The one who detaches from the group denotes a sense of loneliness and alienation transformed into strength. Is it connected to the sense of resilience generated by a sense of displacement and loneliness within certain circumstances? There are moments of touching communion as part of a common mission or belief; possibly a shared pleasure that sometimes comes from pain as dancers know well, or the pleasure of striving with the same effort and goals. The stunning dancers seem to elevate to a trance-like state and empower themselves by demanding a danced tour de force, and the result is intense. Eyal’s work once again shines as something specific and particular, onstage and in the dancers.