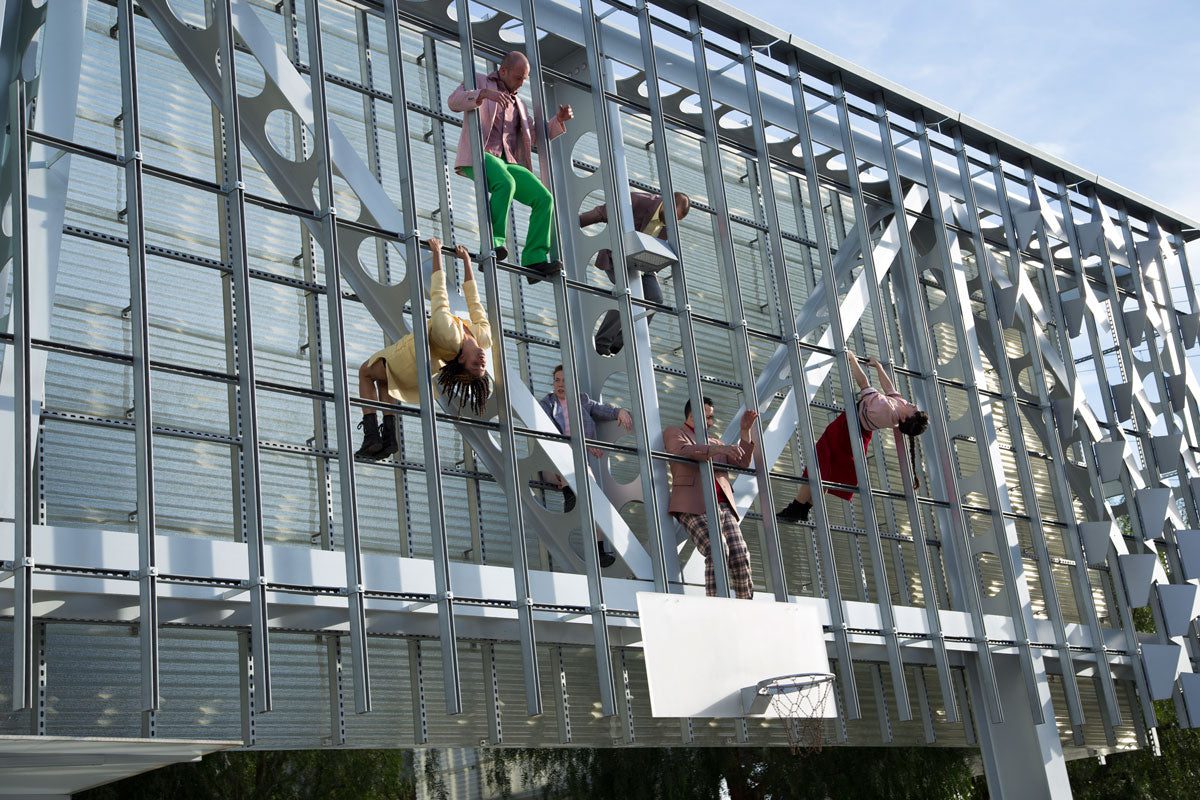 In real estate, the prevailing axiom is “location, location, location,” with Heidi Duckler, whom the Los Angeles Times once dubbed the “reigning queen of site-specific dance,” proving the dictum formidable. Whether choreographing in and around laundromats, shuttered hospitals, bowling alleys or parking lots, Duckler continues to mine magic in her choice of venue, tapping a collective vein that, in the process, invariably unlocks complex emotions.

In this, her 30th anniversary year, the award-winning dancemaker celebrates the milestone by presenting a number of premieres at unusual and intriguing sites throughout the sprawl-to-the-wall city, whose vast web of freeways has created a culture addicted to cars. (In January, Duckler, who’s also taken her troupe to places as far flung as Australia, Russia and Hong Kong, presented a re-imagining of her 1992 “Parts and Labor,” giving co-star billing to a 1970 Coupe de Ville Cadillac that she found on eBay.)

In her latest outing, Duckler makes use of Morphosis, the sumptuous headquarters of Pritzker Prize-winning starchitect, Thom Mayne, whose buildings can be seen worldwide. Beginning on the outside wall, a jungle gym-ish grid replete with ornamentation, geometric shapes and a basketball hoop, all fabricated from Unistrut metal framing, six dancers showed themselves to be equal parts athletes, actors and terpsichoreans.

The audience, seated on camp chairs and looking up, first beheld Teresa “Toogie” Barcelo. Clad in a red velvet skirt, striped tights and sneakers, she appeared to be lounging on part of the grid, as if this were perfectly natural (as if, is right!). Soon, composer Jon Armstrong entered—conventionally—on the pavement, blowing a mean, occasionally mournful sax. (Live music, increasingly rare in dance these days, is a veritable treat and something Duckler promises as part of every 2015 performance.)

Wanting in on the Barcelo “action,” Zoë Nelson was pushed/hoisted up the grid by Nicholas Heitzeberg, who then shimmied up the structure himself. Before long the wall provided a provocative backdrop to three more dancers—Roberto Lambaren, Princess Mecca Romero and Joe Schenck. As bodies melded with the architecture, they created striking tableaux that veered from dangerous dangling à la Sankai Juku to imagery recalling Trisha Brown’s iconic 1970 work, “Man Walking Down the Side of a Building”—if the performers had been rappelling and not, well, engaged with the structure.

These kaleidoscopic patterns were enhanced by Duckler’s costuming: Schenck’s Kelly green pants looked as if they’d sashayed off the set of Saturday Night Fever; Romero’s marigold-colored neo-Chanel skirt and jacket was sexy business meeting; and Lambaren’s garish plaid pants would work on any Florida golf course. Procured from vintage stores, the attire added flair to the whimsical solos and duets, whether the dancers were moving in slow motion, wrapping themselves around each other and through the grid’s squares or cavorting as if on some sort of lunatic chess board.

Meanwhile, Armstrong crooned on his sax, the sonic landscape boosted by  intermittent sounds of Metro light rails whizzing by and the occasional plane flying overhead. In essence, this was an action painting where trust ruled, with the notion of humans ranting against the machine/confinement/ordinariness also part of the equation.

Indeed, as onlookers moved into the Morphosis office—a stark, brightly lit white room filled with six rows of computers, ergonomic chairs and all the accouterments of a regimented work area—the performers were first seen through a large glass wall. Perhaps as a response to Big Brother, homogeneity and/or the outsourcing of work—or in spite of the exhibitionist/voyeurist concept—the dancers let loose, toying with tape measures, telephones, Post-Its, pencils, protractors, Scotch tape and … each other.

Once the audience was escorted inside the workspace, both mood and music changed: Erin Armstrong tootled on a clarinet, Klezmerian at times, percussionist Chris Payne knocked out some rhythms, and, at one point, Sheela Bringi roamed the room singing an acappella Raga.

Weaving in and out of the aisles, Nelson, sporting a pink sheath and tweed jacket that had whiffs of Mad Men, spoke about proper workforce attire. In defiance of office etiquette, Barcelo and Lambaren managed a pas de deux (pas de paper clip), on one of the tables. Heitzeberg even “corrected” his comrades’ various finger and feet positions as if a ballet master. A kind of pop-up dance on the second level had Heitzeberg pushing Romero along a ledge, their duet also featuring a move akin to a balletic fish dive.

Because of occupancy issues and fire marshal regulations, two different groups watched the indoor portion at separate times, meaning the dancers had to repeat the section. During the brief interlude, Duckler, whose DNA seems to ooze creativity, offered viewers wine and small edibles in the parking lot where the work had begun.

Uniting for the rousing finale, audiences were seated in a quasi-Zen garden courtyard, an area where Morphosis architects might have a leisurely lunch amid pepper trees and a sea of small, polished stones. For the dancers, though, things were far from tranquil, as they moved on, behind and under an elongated wooden slab of a picnic table. Hurling themselves to the ground, the performers—fearless, dedicated, exuberant—could have been a human Foosball game, with Kung Fu and Jitterbuggy moves adding to the rapturous, if body-punishing, aesthetic.

Navigating space—be it indoors, outdoors, on terra ferma or perched on high—the sextet became one with the environment. As for the work’s operatic dimension, the sounds of the stones added to the score that poured forth from yet another instrumental configuration—bass guitar, lush electric troubadour harp, flute, bass clarinet and drums.

The 90-minute opus ended with cake and champagne, a commemorative gesture that will be featured at all of this year’s anniversary offerings.  At the end of May, Heidi Duckler Dance Theatre will be in collaboration with Claire Gignac et compagnie, when they present, “Chinatown Blues.” Whether or not there will be fortune cookies is unknown.

What we do know, however, is that Duckler is on a roll, literally and figuratively, and that Los Angeles ​just ​would​’​t be the same without her.