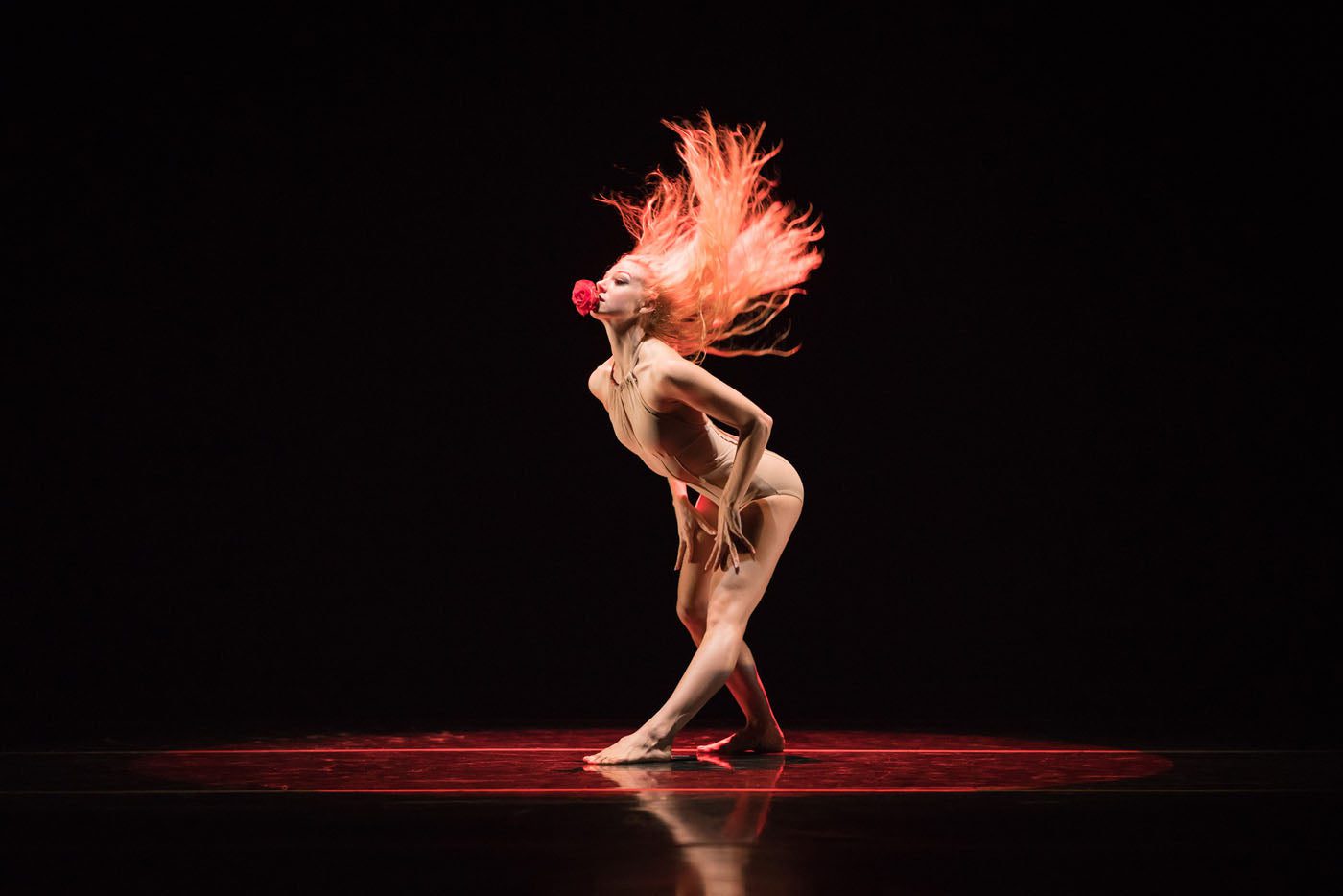 Love is a Rose

“Requiem for a Rose” and more at Smuin's Dance Series 01

What role do imitation and “borrowing” play in developing an artist’s oeuvre? And how, as a viewer, do you separate your perceptions of an artist’s choreography from your awareness of theatrical trends?

I thought about these questions while watching Annabelle Lopez Ochoa’s “Requiem for a Rose” on a triple bill at Smuin. The Colombian-Belgian choreographer is a name du jour just about everywhere now—her professional website lists more than 50 commissions worldwide—but oddly her reputation is just reaching San Francisco. The small but mighty Smuin scored wisely in acquiring “Requiem for a Rose” a season before its much larger city brethren, San Francisco Ballet, presents a world premiere by Ochoa as part of its 12-choreographer Unbound Festival next May. At Smuin’s final fall season show, it was easy to see how her combination of dramatic compositional flair and lush-yet-clean movement (a dash of European gangliness tempered by enough balletic conventionality for mainstream audiences) has made her in demand with companies large and small.

“Requiem for a Rose” falls right in the middle of Ochoa’s development, made on Pennsylvania Ballet in 2009, six years after she left the stage to pursue choreography full-time. She chose the most romantic music she could think of in the halting, aching adagio of Schubert’s String Quintet in C Major, she’s explained in interviews, and she built a solid schema. The ballet starts with the sound of a heartbeat and a single dancer in a nude leotard, with a red rose held in her mouth, giving an angular, distressed, hair-flinging solo. She is “real love,” Ochoa has explained, which entails struggle and ungainly conflict. The 12 dancers that flood the stage when the Schubert begins, wearing unisex billowing red skirts and bare or nude-leotard-covered chests, are her bouquet of roses representing “romance,” she has said.  After they entrance us for a while, “real love” enters their midst, and at the end leads the roses in a solemn line across the stage, evidently guiding mere romance to become something more serious.

Danced beautifully by the Smuin company, the core of the ballet was really quite ravishing, driven by sophisticated spatial composition and swirling ensemble movement marked by lush head and shoulder rolls, and a constant sense of sweeping surrender. At one point the dancers clustered, backs to the audience, making hieroglyphic hand gestures; near the climax they clustered again and paused in gorgeously composed tableaux. I was struck throughout by how integrally Ochoa worked with the full skirts, and by the way full skirts on men (seen in more than a few post-millennial ballets) and even unisex toplessness (seen also at Nederlands Dans Theater) are becoming a wonderful gender-unifying replacement for the female-only tutu, allowing men to find more lyrical movement qualities in a way that is never camp.

For that reason, the costuming seemed a fruitful use of a theatrical trend. But the use of the leotard-clad “real love” soloist in the final quarter of the ballet gave me pause. The woman (commanding Erica Chipp-Adams, on Saturday) comes back walking among the dancers, gesticulating coolly with semaphoring arms, and I couldn’t help but think of the pale-leotard clad soloist who appears in the final sections of William Forsythe’s “Artifact Suite,” walking and gesturing as the ensemble continues its rhythmic crush. The resemblance here is just too striking for Ochoa not to have taken this element from the Forsythe. But if, as Stravinsky supposedly said, “I don’t borrow, I steal,” then Ochoa has stolen well.

The question of artistic forbears and the acknowledgement of—or choice not to acknowledge—their legacy applied to the other recent ballet on the Smuin bill, Garrett Ammon’s “Serenade for Strings.” Is it bold to use the same Tchaikovsky music made sacred by George Balanchine in a ballet seen dozens of times by any serious dance lover, or just blithe? I tried not to judge the decision, but when a new ballet evokes a known masterpiece, is it possible to refrain from comparison?

Ammons’ “Serenade,” made for his Denver company Wonderbound in 2013 and acquired by Smuin the following year, makes the Tchaikovsky a romp, appealing in its witty subversion of partnering conventions, but never striking the profundity this music, even if you’ve never seen Balanchine’s version, stirs in the heart. The recurring joke is that the women stand flat footed with legs hip distance and the men end up lying beneath, looking up their fluffy skirts.  Erica Felsch and Benjamin Warner gave the main pas de deux a youthfully innocent interpretation. Nicole Haskins stood out for her vivacious strength. Newer member Rex Wheeler partnered Smuin’s unofficial prima Erin Yarbrough-Powell. I could have watched his un-selfconscious, fluid mode of immersion all night.

Ammons’ “Serenade” is a solid piece to show off a company dancing with precision and élan, and great praise must go to company ballet master Amy London. “Requiem for a Rose” evoked an eloquence that this company, whose shrewdly selected repertoire under artistic director Celia Fushille leans towards the gently comic, does not always get to evidence. Unfortunately I had to leave just before the final ballet on the bill, Michael Smuin’s tribute to Sinatra, “Fly Me to the Moon.” But knowing that work from past Smuin performances, I know it was a well-chosen ballet for carrying on company founder Michael Smuin’s legacy. And knowing these dancers, I doubt it was ever entrusted to more worthy interpreters.

Previous
A Will Within Nature

Next
Pure Lust and Combat Fatigue