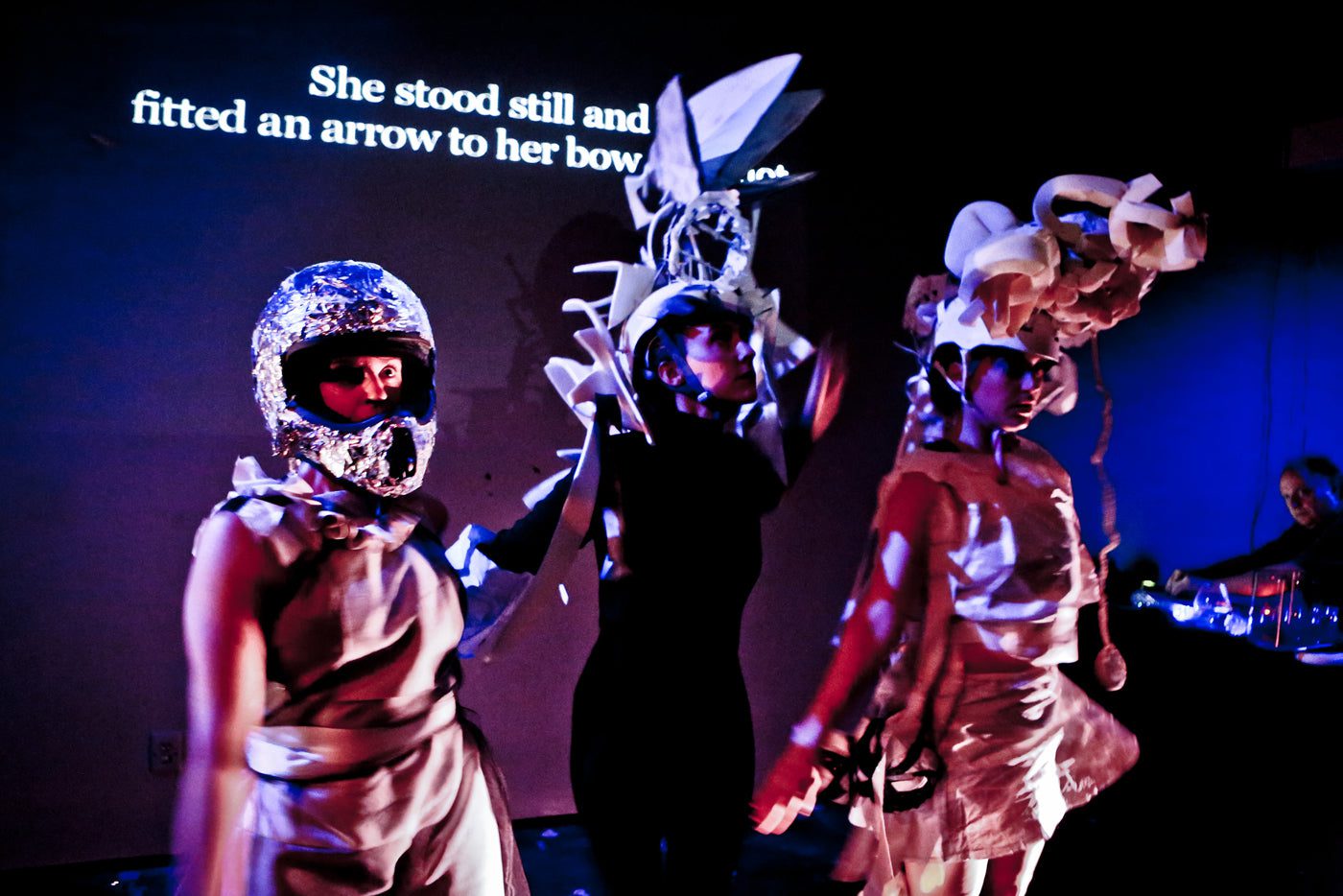 Los Angeles, a town that loves the business of movies, television, pop music—and now art, with high-end galleries and museums flourishing—has a reputation for being notoriously inhospitable to homegrown concert dance. Presenters and venues are sorely lacking, and, indeed, the paper of record, the Los Angeles Times, rarely covers the local dance scene anymore.

That, however, hasn’t stopped talented terpsichoreans from trying their hands—and feet—in this town, with Laurel Jenkins a welcome addition to the fold, having moved here three years ago. Jenkins, who currently teaches at UCLA, was a member of the Trisha Brown Dance Company from 2007-2012. An exquisite mover who also danced with Vicky Shick, Sara Rudner and the Liz Lerman Dance Exchange, she’s no stranger to the international stage, having been presented, as well, in cities that include Prague and Berlin.

In her short, albeit mesmerizing new solo, “Wind Hill,” which the press release describes as capturing, ‘archetypal imagery from Joseph Campbell’s Hero’s Journey,’ Jenkins, accompanied by composer/percussionist Miguel Frasconi, made use of a rubber-tipped pole as partner.

No Fred and Ginger, dancer and pole nevertheless created a unique tableau: Conjuring images that ranged from Huck Finn on a raft to Bunraku puppetry (the latter not surprising as Jenkins also worked with New York City’s Puppet Lab), the performer was a study in grace, articulation and power.

There was also a sense of ritual in the work, as Jenkins, clad in red windbreaker and cuffed grey pants, whether executing an arabesque, back bend or sky-high leg extension, brought an austere quality that meshed perfectly with Frasconi’s live playing of glass objects. One moment Jenkins was nestling the pole against her check, the next she might situate it under an arm, leaning on it, effortlessly, but with a kind of militaristic dignity, her cocked head revealing a swan neck.

A magician with an enormous wand, the pole at times either burden or friend, Jenkins also manipulated it through her legs. Skipping, gliding and turning with the piece of wood, a circle-of-life quality emanating from this minimal dance of enchantment, Jenkins finally dropped the pole, arms open, with Carol McDowell’s lighting design casting an amber hue before fading to black.

In last year’s “IMAGE ACTION TEXT,” Jenkins, who has called her dances ‘energetic drawings on which costumes, objects and puppets ride,’ maneuvered handily between narration and abstraction in a work that also asked the question, ‘Can a dancer morph from a human to a sculpture?’

For this viewer, the answer was, ‘Not exactly.’

Still, that notion occasionally surfaced in the work for Jenkins and five others, with scenes fueled by the handiwork of costume designer Mónica García. Created from Tyveck, a brand of difficult-to-tear, high-density polyethylene fibers, several of the outfits were reminiscent of Rei Kawakubo’s pricey oddball designs, notably those featuring Surrealistic lumps and distortions as seen in Merce Cunningham’s 1997 work, “Scenario.”

With fashion (?) as deployable art, the piece began with Barry Brannum, himself clad in layers of Tyveck, including steroidal headgear that could rival any bonnet at a gospel church or Easter parade, moving in slow, Butoh-esque style. Text, drawn from Edith Hamilton’s 1942 Mythology, was intermittently projected on the rear wall, containing phrases such as, ‘In his chariot driven by coal-black steeds he rose up through a chasm in the earth.’

Whether Brannum was steed or driver mattered not, as he was soon joined by Samantha Mohr (with whom he would later do a compelling, push/pull duet), Madison Page, Alexx Shilling and Devika Wickremesinghe, most sporting Garcia’s rag-tag apparel, some of which created soundscapes of their own.

Again accompanied by Frasconi, whose ‘instrumentarium,’ in addition to glassware, featured electronics and a laptop, from which an array of exotic and pulsating sounds emerged, including gong and DJ-type scratching that periodically had a pulverizing effect, the dancers reveled in a rudimentary groove: From yogic poses and arched backs to Tai Chi gambits, the vocabulary often seemed as hodge-podgey as the performers’ apparel.

Then there was Jenkins: Wearing red sneakers, black leotard, tights and a headdress that would have fit in with Katy Perry’s Super Bowl half-time spectacle, her regal bearing somehow defied the weirdness, compelling, instead, the viewer to ogle. And not just at the dancers, but also at the curious shadows they created, particularly those accented by Asian-inspired hand and finger movements.

Yes, here was Jenkins as master puppeteer, where unison trios wiggled hula hips as if from a luau—in outer space. Ah, the alien conga line, replete with quasi-Tiki torches, Schilling in a silver helmet and another dancer balancing what looked like a Calder mobile on her head, the effect evoking shades of Paul Taylor’s quivery insect dance, “Gossamer Gallants.”

With Frasconi’s music veering from ethereal to raucous, and Hamilton’s random phrases—“Suddenly above him in the air a radiant form appeared—manifestly a goddess”—popping up throughout the piece (overly long at about 40 minutes), the opus could qualify as a poster child for strangeness.

An offbeat blend of Plan 9 From Outer Space, postmodern pedestrian moves nodding to the Far East, and any Star Trek episode, this is a dance theater head-scratcher, but one that begs the phrase, “Beam me up, Jenkins!”

Next
Facing the Music