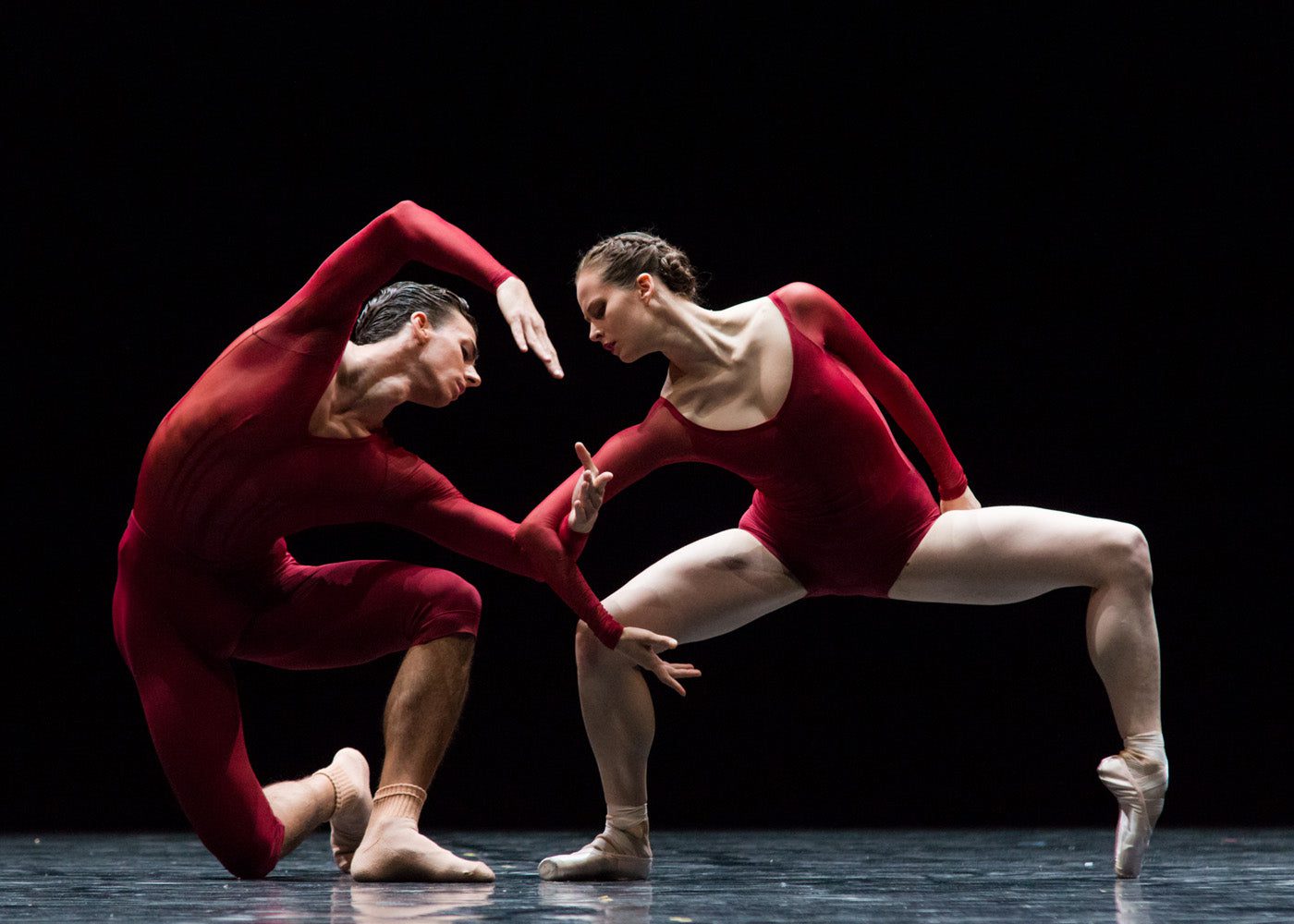 Any performance of a work by William Forsythe comes with a certain degree of technical expectation—an all-Forsythe triple bill is, in this respect, a bold statement of confidence.

Yet that’s exactly what Dresden-based Semperoper Ballett have chosen to mark their London debut. It’s not only a show of confidence, but also a reflection of the close relationship the company have built with Forsythe under the artistic directorship of former Frankfurt Ballet dancer, Aaron S. Watkin. Coincidentally the programme, performed at Sadler’s Wells, also arrives at a fitting time, Forsythe having recently been awarded the Fedora Prize for a new commission by the venue (“A Quiet Evening of Dance” will be performed as part of the Sadler’s 20th anniversary celebrations in October).

The company opened with “In the Middle, Somewhat Elevated.” The stage bare, besides the eponymous pair of golden apples suspended mid-air, and the dancers dressed simply in turquoise leotards, “In the Middle” is one of Forsythe’s most distinctive, and exposing works. A thrilling explosion of movement driven by Thom Willem’s punchy score, the dancer’s must perform Forsythe’s challenging choreography with attack and precision and then lightly shrug it off, as if nothing much had really happened.

It’s that almost cocky approach to such technically complex material that makes “In the Middle” an exhilarating work to watch—and it’s that element that is largely missing from this particular performance by Semperoper Ballett. The company’s technique and execution of Forsythe’s style is precise and on form, but that careless, sexy, ‘I’m too good for this’ attitude is never fully indulged in.

There are moments, mainly from the soloists, that exhibit a flash of that daring approach. Here the energy of the work lifts, movement slicing through space to the sharp accents of Willem’s score.

This is clearly a company of brilliant dancers. If the same attack and drive shown by the soloists where to be carried through “In the Middle’s” ensemble sections, then Semperoper’s performance of this iconic work would thrill with an excitement and power to match their technical precision.

Any initial reservations are, however, swept away by Forsythe’s “Neue Suite.” A series of pas de deux, created or rearranged by Forsythe especially for the company, unfold one after the other.

“Neue Suite” allows each couple their moment and the dancers of Semperoper Ballett clearly hold a desire to make that moment count. From soft, elegant duets in which the women pull sensually through retiré and arabesque, to pas de deux that exhibit strength and precision, the differing moods of Handel, Bach and Berio are delicately echoed—in both Forsythe’s choreography and in each couple’s heartfelt performance.

Among eight outstanding partnerships an all too brief pas de deux, the couple dressed in red, captures the attention. Short and sensual, the two fold into each other’s bodies and slip seamlessly into lifts.

At the conclusion of each pas de deux the couples casually part ways—a Forsythian touch that keeps this sequential work light-hearted and engaging. In this instance, as the lights fade, the duo’s ongoing movement is enclosed by darkness. It’s as if the audience have been offered a brief insight into a private, precious encounter.

Also notable is a sprightly, flirtatious pas de deux performed by Zarina Stahnke and Houston Thomas. Dressed in yellow, the two perfectly echo the bright sunny tones of both movement and music with their playful interaction and light interpretation of Forsythe’s neat, speedy choreography.

Strung together these duets not only offer an insight into the varied tones of Forsythe’s work but mark his skill in capturing the intimacy, and nuances, of human relationships.

In comparison to the preceding works, “Enemy in the Figure” is strikingly different. A large, undulating wooden panel stands mid-stage like a displaced wing. From behind it dancers make sudden entrances and exits, a device that, initially, aids the quirky style of this work and, later, builds an irrepressible momentum. A single on-stage spotlight, which the dancers periodically reposition, casts a moody glow upon bursts of action.

Choreographically, this work is thrillingly constructed. The focus constantly shifts as dancers emerge, suddenly, from behind the screen, fall into another’s arms, or slip into movement in the shadows. It’s a work that doesn’t for a second allow the attention to waver.

Snippets of clean, articulate movement, distinctly Forsythe, contrast with grappling contact work and a heavy, sometimes forceful, contemporary style. Bodies are thrown—at partners and upon the exposed walls of the wingless stage. Dancers take running slides into position and immediately propel themselves into technically complex sequences. It’s a fearless combination which, from minimal beginnings, builds to a racing, frantic energy.

It’s a style expertly fulfilled by the dancers of Semperoper Ballett. Their casual, hip-slinking approach to Forsythe’s challenging neo-classical technique, their fearless attack of the contemporary sections and their unrelenting energy proves they are a versatile, world-class company of dancers. It’s an exhilarating combination; the exact attitude that, at least on this occasion, was missing from “In the Middle, Somewhat Elevated.” Transferred to that work, this choreographically strong triple bill would prove a programme to be reckoned with.