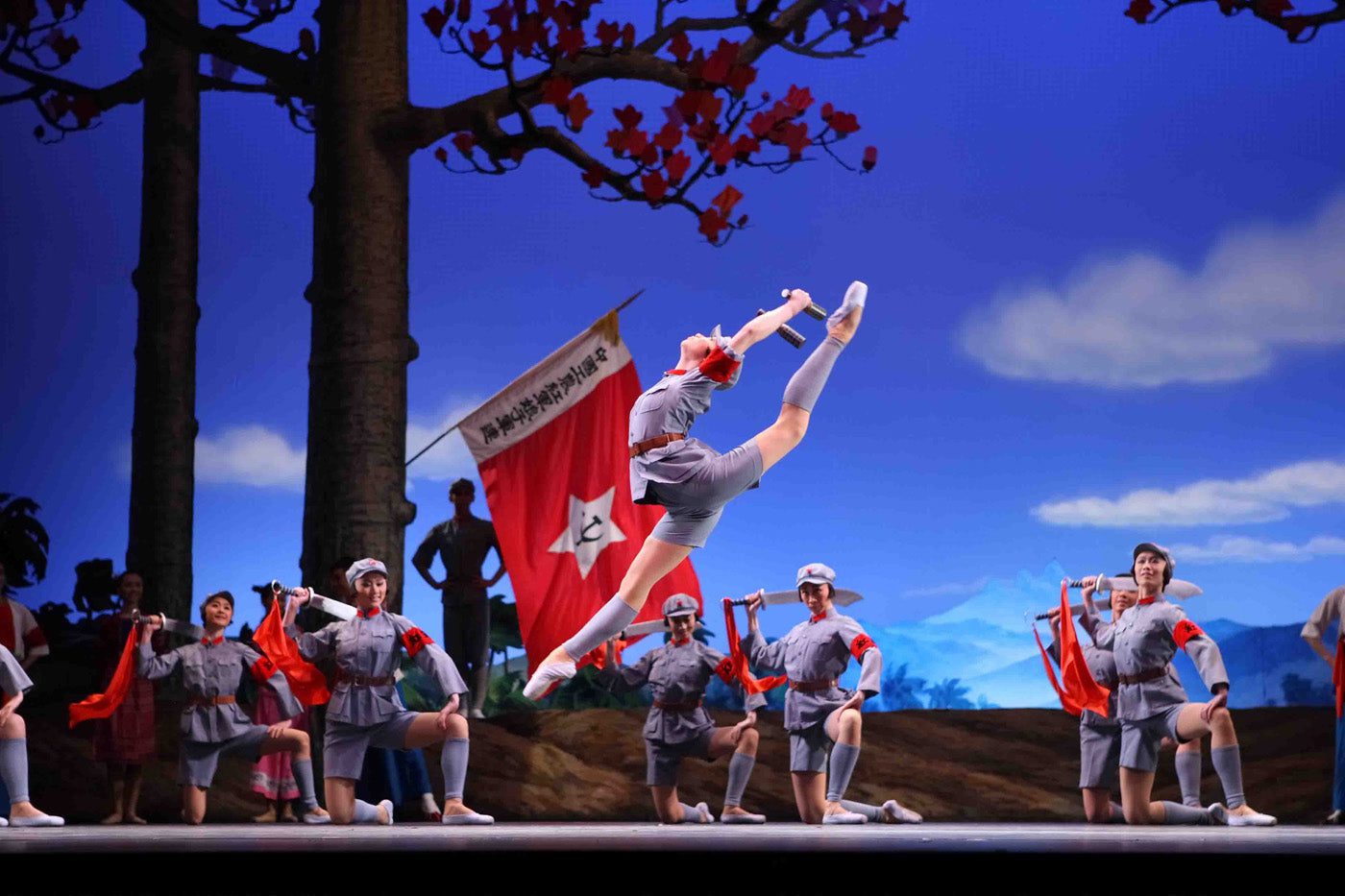 National Ballet of China's “The Red Detachment of Women”

In mid-July the grove on Amsterdam Avenue in front of the David H. Koch Theater was littered with cigarette butts. This wasn’t anything out of the ordinary; the trees are adjacent to the stage entrance, and it’s always where the dancers and musicians go for smoking breaks. The cigarette butts on this particular occasion, however, were a flaming red, making it look like a burst of confetti had just settled to the ground. No party had been thrown. It was just that the cigarettes, instead of the usual Parliaments or Marlboros, were Chinese, and the smokers were members of the National Ballet of China.

Though this served as an announcement of sorts, it was at least more subtle than what the NBC did to the Théâtre du Châtelet in Paris, where they bathed everything in a red glow, had the staff dress up as Red Guards, and placed a giant statue of Mao Tse-Tung in the foyer. Nevertheless, New Yorkers was still given their due dose of Communism. “The Red Detachment of Women” (1964) was the most successful of the yangbanxis, the ballet-opera spectacles embraced by Mao’s reign during the Cultural Revolution. The score used to play practically nonstop on the singular music radio channel, inducing even the youngest children to sing its melody in their sleep. I suppose it was no wonder, then, that half the audience members intermittently burst out in song and clapping during the performance.

The take-away of the plot: women are victims of a capitalist system. At the beginning we see a lot of ballerinas lying prostrate on the ground, their sobs synchronized, men of commerce menacing them with whips. It is also at this point that the dancing looks most identifiably of the classical style, with the arms rounded and the fingers soft. It is only later that “the proletariat overthrows the bourgeois control of ballet,” according to the government record of the libretto. As the women learn more about Marx and Engels, the classical port de bras is replaced with fists and machetes, and toe shoes stab the air and floor as if they are weapons in disguise. (Last June, artist Ai Weiwei made the metaphor more explicit with his loaded “gun-leg” pose, clearly inspired by “Red Detachment.”) A good deal of the traditional ballet vocabulary, particularly when it comes to the carriage of the shoulders, derives from fencing, and the earliest corps formations were modeled after those of the army. Here we get to see what ballet might have looked like if it retained its violent origins, and to striking and sometimes scary effect. The original cast actually underwent military training so that they might wield their weapons more convincingly.

At the Kirov, the Soviets would put aside their socialist agenda, always including a romantic entanglement or two in the libretto so that their heroines could appear more relatable. Not the case here. Gone was the pas de deux of love formalized; gone too was the solo as an expression of individual sentience or willpower. Instead we saw rows and rows of women soldiers in what turned out to be an endlessly repetitive death march of a ballet. It was exhausting just to look at. If this was supposed to inspire as propaganda, I left much too tired to want to do what they did. The ceremonious opening of the granaries at the end hardly seemed worth the wait, though I admit this might have something to do with my watching the show on a full stomach.

“The Red Detachment of Women” continues to be acted out in all ideological sincerity. But while the message remains the same, its means have changed. Though lacking in any kind of musical sophistication—the company has long been wary of the “mystification” of music in the West—dancers demonstrated the highest of athletic standards. Even the men had dazzlingly flexible extensions, and everyone demonstrated convincing pathos as victims of capitalism before going cold and Communist. In the mid-eighties, it was suggested that when the soldiers were wounded on the stage battlefield, they lower their heads in order to act out their injuries more convincingly. An outcry ensued: “This is what revisionists call ‘writing the truth,'” a party member protested. During this performance there was no acknowledgement of mortal pain; heads were held high until dropping to their stiffly heroic deaths.

The French poet and critic Remy de Gourmont once said that the inventor of a tool is usually not the one who uses it on a masterpiece. This might have been the case with Symbolist poetry, of which he was speaking (vers libre or free verse wouldn’t come into its own until a few decades after the Symbolist era). But this maxim hardly seems applicable to ballet, and particularly not in the case of China, where classical dance is just over a half-century old. As the country continues to assimilate into the global (capitalist) economy, its dancers have, too. They’re competing in international competitions, dancing as guest artists in companies as diverse as the Stuttgart Ballet and Richmond Ballet, and performing works by Balanchine. But despite the fact that every foot and limb was in place, I had the feeling that I was watching someone’s gloss or interpretation of what ballet is supposed to be rather than what it is in itself.

Next
The Belle of the Ball