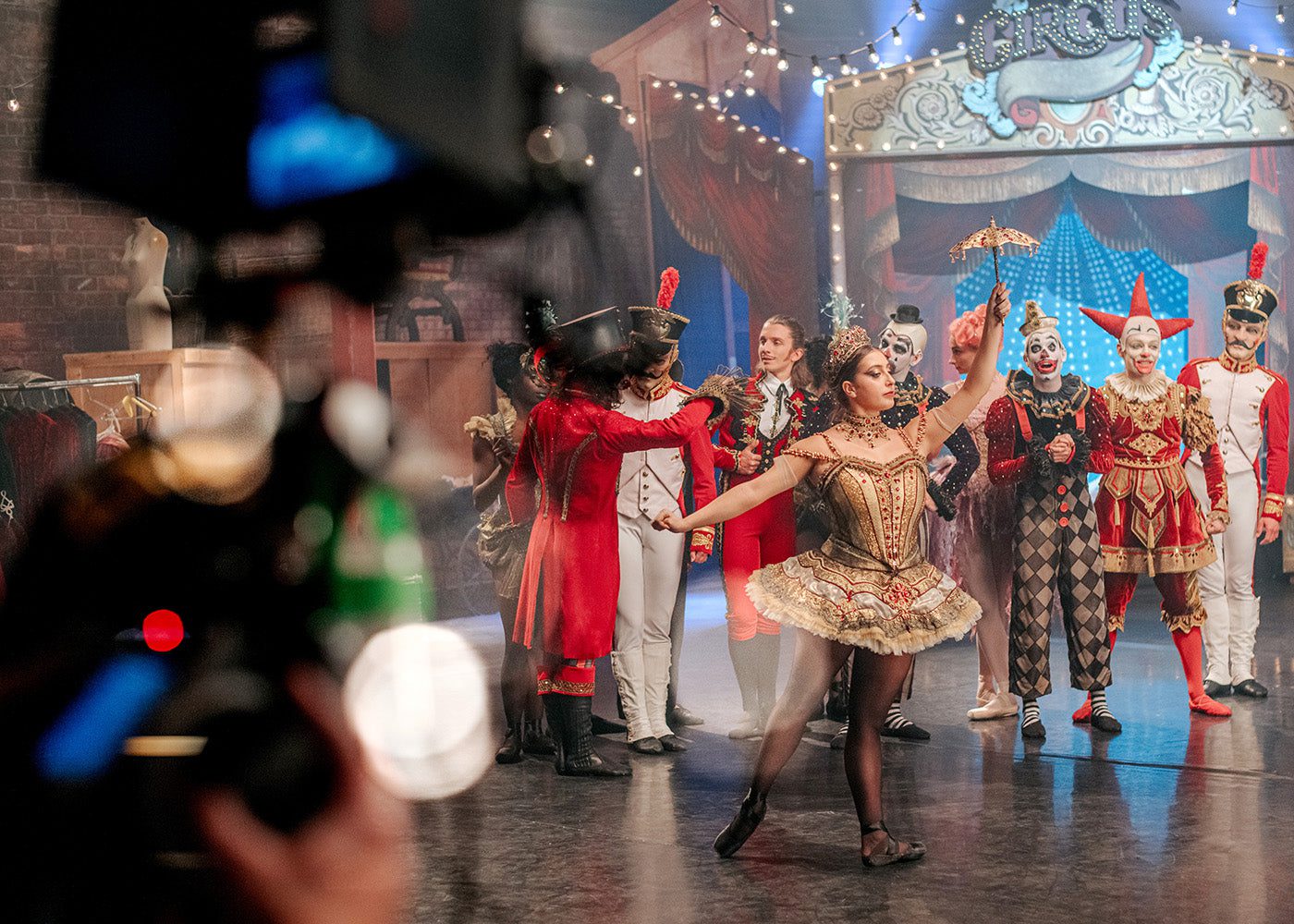 It’s not just little girls who dream of escaping into ballet. Created for the screen by Christopher Hampson and set and costume designer Lez Brotherston and filmed by directors Jess and Morgs, The Secret Theatre comes across as a Victorian toybox full of rich, endless surprises. When a young boy, played with exuberance and wonder by Leo Tetteh, finds his way into an empty theatre, he is taken on an adventure into the heart of Christmas ballet, where dancers cast spells before his eyes. Here, Scottish Ballet bring the viewer not one, but two, magical ballets for the festive season, as they integrate moments from “The Snow Queen” and “The Nutcracker” together in their first feature film.

What could have been an exercise in schmaltzy clichés is instead a wholly inventive new approach to dance on film, accessible for a family audience. There is less focus on a linear conventional narrative, and more of an emphasis on the creativity of the choreography itself. It’s all about the rolling action: more surreal than saccharine, with panning cameras providing dizzying shots, extreme close-ups for a 3D effect, and some slow motion and sped-up sequences adding to the dreamlike atmosphere. That’s not to say there’s not a soupçon of kitsch though, as evidenced by the impish circus troupe and their comic interludes, played large for laughs.

Lexi (Alice Kawalek) is the cheeky but trustworthy friend who leads the child deep into his bustling new world. A panoply of eclectic styles pervade in every frame: passionate but sweet Roma folk dancing; a geometric, Busby Berkeley-infused ballroom moment, Vaudeville from tumbling clowns and acrobats, and even the young boy himself busting out some hip-hop moves while spinning a basketball, inspired by what he is witnessing. Only Constance Devernay is given less to do—here, her Snow Queen brings froideur and a wind chill to proceedings, as she stalks through the sets, but her dancing is kept to a minimum and is merely gestural. However, she’s a welcome reminder of the icy villainy that lurks in the shadows of the best dance adaptations of fairytale and folklore. The Snow Queen, with her Snow Wolves and Snowflakes, weaves an additional element that writers Angela Carter and Marina Warner would be proud of—something morally ambiguous, yet impossibly glamorous and shimmering twinkly white.

There is an impressive extended sequence featuring a female group, whose allegro work is absolutely dazzling—their toes seem like little white doves, so effortless do they make it seem. It’s wonderful, too, to see Sophie Martin back in the fray: this time, she is the Sugar Plum Fairy, and is suitably playful, emerging, à la Kylie as the Green Absinthe Fairy in Baz Luhrmann’s Moulin Rouge! from the ether to perform a filigree delicate solo, then romantic but complex pas de deux with the Nutcracker Prince (Jerome Anthony Barnes).

Above all, though, it seems Scottish Ballet have in their midst a new secret weapon. Barnes performs incredible pirouettes as the Nutcracker Prince—his turbo-charged solo, performed in front of Brotherston’s wall of Christmas baubles, is nothing short of breathtaking. As he represents the fantasy made flesh, the boy now fully grown and dancing for his life, there is an almost unbearable poignancy, at a time when we can only watch from a distance. Theatre is where our dreams take flight, but we have to start small. It’s not just for little ones- and The Secret Theatre made my eyes mist over—a reminder in these hard times that, as Hampson himself stated, “theatre and dance is not a nice to have, it is a NEED to have.”