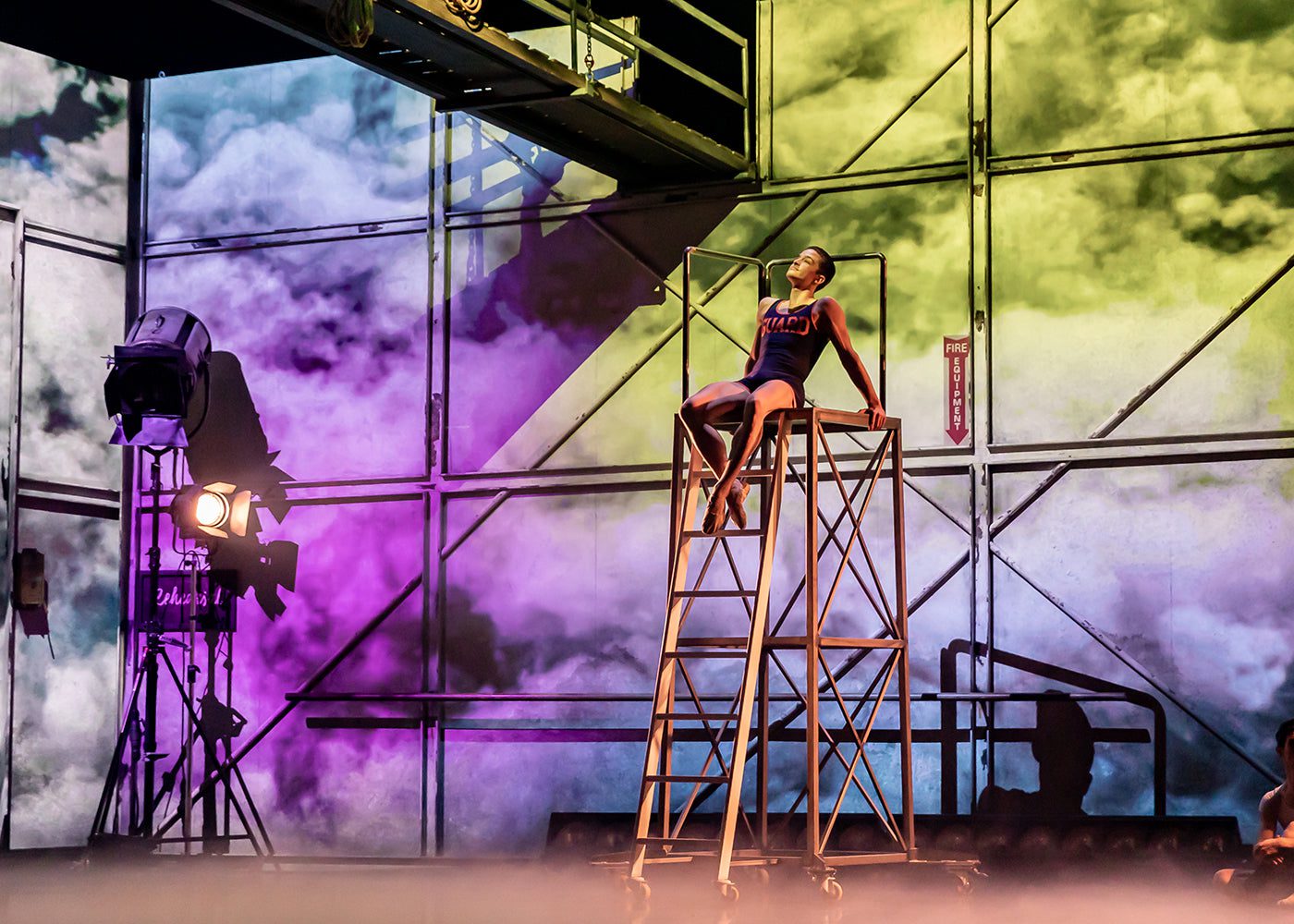 Gene Kelly, what can ya say? A class act. Timeless and evergreen, he is still notching up homages on films and television; and millions of hits on YouTube to subsequent new generations, twenty-five years after his passing. A legend of Hollywood, from the time of wise guys and sassy dames: he was a singer, dancer, actor—the triple threat, the epitome of an all-rounder.

This thrilling show, “Starstruck,” a UK premiere, is a collaboration between Kelly’s widow, the wonderful Patricia Ward Kelly and her friend, indefatigable Scottish Ballet CEO and artistic director Christopher Hampson, and celebrates Kelly’s boundless energy, joie de vivre and creative spirit. It is a performance which takes as its cue many scenes from his ballet from 1960, “Pas De Dieux,” which Kelly created for the Paris Opera with the ”étoile de Paris,” Claude Bessy.

And what a dream production it is too—a freewheeling, ever shape-shifting collage of ideas, storytelling and layers of little meta tricks. The soundtrack captures the duality of Kelly’s ouevre, both classical and jazz, as it features beautiful music from Chopin and Gershwin.

Evan Loudon is first shown as the Creative Director/Choreographer, a loose-limbed but elegant, lightning bolt of activity, blurring the line between fantasy and reality, conjuring his muse (Sophie Martin) in a mirror, before becoming Zeus, God of the sky. Martin’s muses (there are two here, as she flits between a strong-willed Aphrodite and the diva-like Star Ballerina) are no mere ciphers, but rather flesh and blood women with their own autonomy and storylines, every bit as essential to the narrative as that of the creator character. She moves like a flickering butterfly on a flower, but there is a resilience, intelligence, and suitors for her to choose from, too. Eros, with kitsch gold wings, is causing merry disruption, and the portrayal by Bruno Micchiardi, is impish, light and fleet-footed, delighting in chaos.

Indeed, it’s Kelly’s very particular “American style” (he brought his American, jazz-inflected take on ballet to Paris, long before Bob Fosse or Jerome Robbins) which is paramount to understanding the fundamentals of this piece—he loosened the ribbons of pointe shoes, if you will—while still retaining the elegance and discipline of the form. Here, a stunning travelling jeté flies next to a bandy twist tap move. The incredible ensemble leapfrog over each other, they strut and snap, they shimmy and wiggle, sometimes barefoot. The action moves from rehearsal room to barre, to bar room, to beach, to a magical bedroom—the possibilities are only as limited as the imagination. Lez Brotherston’s backdrops are gorgeous, all imperious Paris architecture or (literal) twinkling galaxies.

It’s not simply mindless froth, either. There are darker subtexts percolating within- mindless, thuggish machismo is lampooned, with an acrobatic tumble and a “sort ya life out” kiss-off. There is a reference to marionettes, and the inherent disposability of dancers. The many hierarchies behind the scenes, of snobbery, rivalry, flirtations and oneupmanship, are deftly dealt with, and sent packing. Kelly’s mischievous humour suggests he had no time for the BS, or posturing, of the Hollywood system, the wannabes and also-rans.

At times, too, it’s also very sexy: the pas de deux between Martin and Loudon, all sighs and arched backs, is as close to foreplay as it’s possible to get without actually making love. Martin’s solo, slinkily coiling herself around a chair, is also reminiscent of the rather suggestive scene that famously got the nineteen year old Leslie Caron, co-star of Kelly, in trouble with the censors in An American In Paris.

Hard to believe, then, that much of this incredible piece is sixty-one years old. It never comes across as a dusty period piece. The company make it absolutely of the moment, with charm, charisma and humour. Hampson’s cunning tweaks and choreographic adaptations mean it’s a marriage made in heaven. C’est magnifique! Encore une fois!

Next
David Hallberg, Wild at Heart