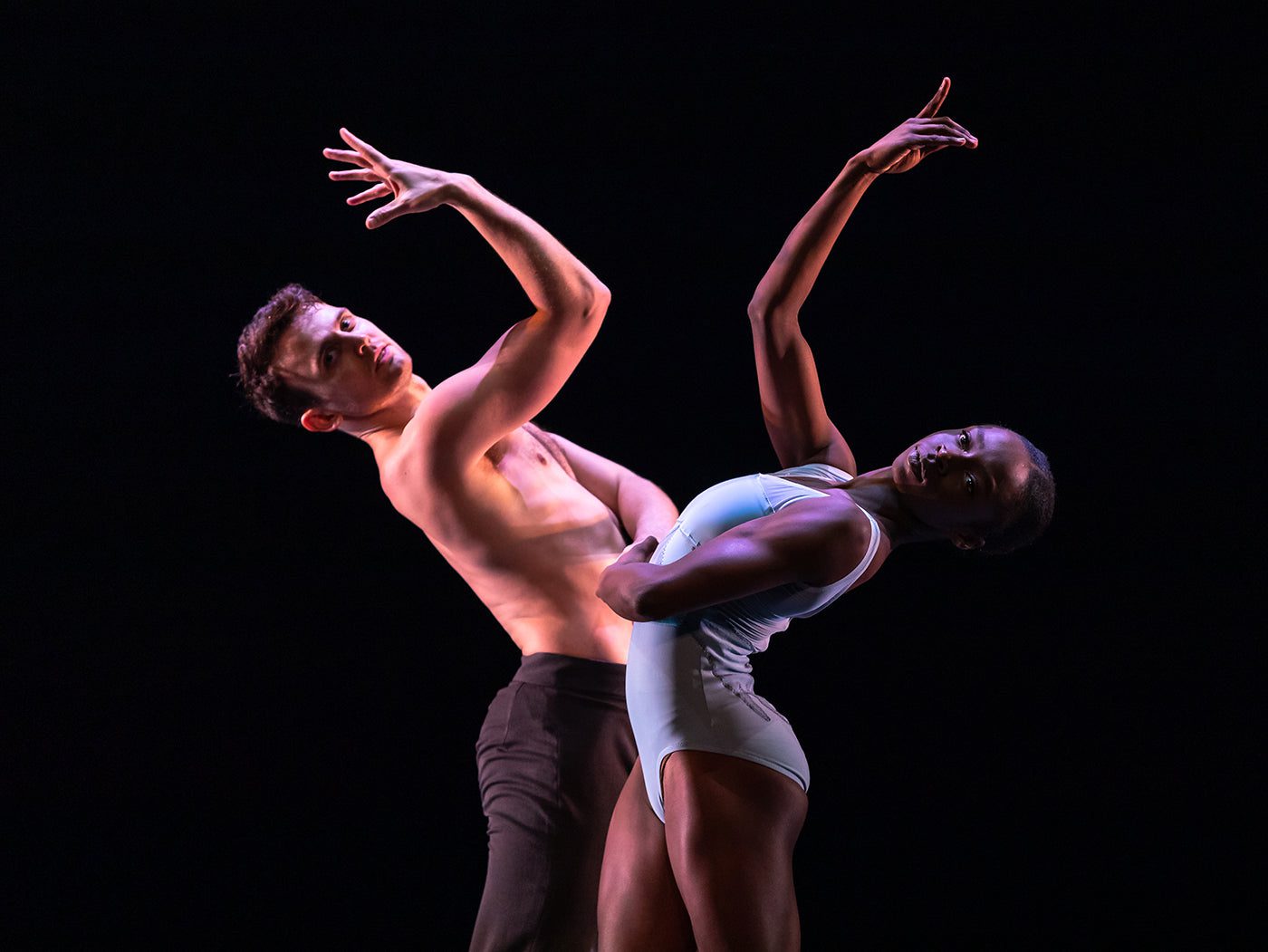 Having retired as a dancer from Scottish Ballet in 2017, artist-in-residence choreographer Sophie Laplane always delights in anything she turns her hands to. Her new world premiere, created to mark the company’s fifty year anniversary, “Dextera,” is really rather special, characterised by her typically wicked wit and imagination.

A multitude of configurations pepper this new piece, and the energy level is incredible: a constant rolling, rollicking piece which is hilarious, pointed, and gorgeously staged. Focusing on hand placements, and some red gloves which contain mysterious properties, Laplane’s slinky, juddery female dancers (with handles on Elin Steele’s witty costumes) are seemingly little more than disposable mannequins, a head or leg placed a certain way by their masculine counterparts. That is, until a male model is brought in, disrupting the gender imbalance. It’s a wry comment on the nature of female representation in dance, where women all too often are sidelined to minor roles. Then, all hell breaks loose and absolutely anything goes, including allusions to spanking and percussive clapping, and there is a sexy, quirky “Slap Dance”  for a group of six with very sharp transitions and clubbing-inspired shapes.

Aaron Venegas scurries hither and thither as the Glove Collector, an unknown quantity with potentially nefarious intentions for the dancers. His sneaky scampering suggests nothing more than greed, the need for absolute artistic control. But, he is thwarted, and as multicoloured gloves rain down from the sky, there is yet more gender neutrality in same sex partner work. In the Ainsi Font sequence, Claire Souet and Anna Williams take back control from master manipulator Evan Loudon, and tangle together like Siamese twins escaped from a Victorian circus sideshow.

It all culminates in a very cheeky shakedown to a disco samba version of Mozart, falling just the right side of kitsch. With Laplane at the helm, the wonderful ensemble are in safe hands, and classical music—and female and male agency—will never quite seem the same again.

“Elite Syncopations,” Sir Kenneth MacMillan’s 1974 ballet, remains, as ever, a splendid confection, and a real treat. To the feel-good ragtime music of Scott Joplin, and with gloriously eccentric colourful costumes by Ian Spurling, the whole company, complete with the equally dapper orchestra, are onstage together. It is a cheeky comic tale of rivalry, both sexually and movement-wise, between dancers in a jazz marathon. Many may dismiss the piece as mere froth, but it’s actually extremely complex, with much of the action en pointe, fizzing with restless physicality, and containing many precarious near drops of dancers (the audience gasp at least five times tonight, for fear of some hitting the floor).

Indeed, with a few modern wiggly tweaks to MacMillan’s original choreography, this piece is mired in vintage jazz stylings, good ole vaudeville phrasing, and pure slapstick. This is especially true of the fabulous “Alaskan Rag,” where Jamiel Laurence’s nebbishy Harold Lloyd type, a hapless sort with big glasses and awkward timing, only comes up to the waist of glamorous partner Grace Horler.

Elsewhere, though, it’s Constance Devernay’s imperious little minx, with her seemingly inexhaustible parade of lovelorn suitors, who dominates the narrative. She’s all langorous limbs, and coquettish hip-shaking, particularly in her shimmying “Stop-Time Rag.” She is superb, flawless even when a button from her elaborate costume makes a spirited dash for freedom. Oops!

The couplings, here as in life, aren’t always what they seem, and never seem to last as long as a two-step. Ultimately, though, things resolve happily enough. Laurence’s loveable nerd may not get the gal of his dreams, but he can still have a swell ole time joining front and centre alongside all of the hep cats in a final cakewalk inspired routine. Boy, you betcha!