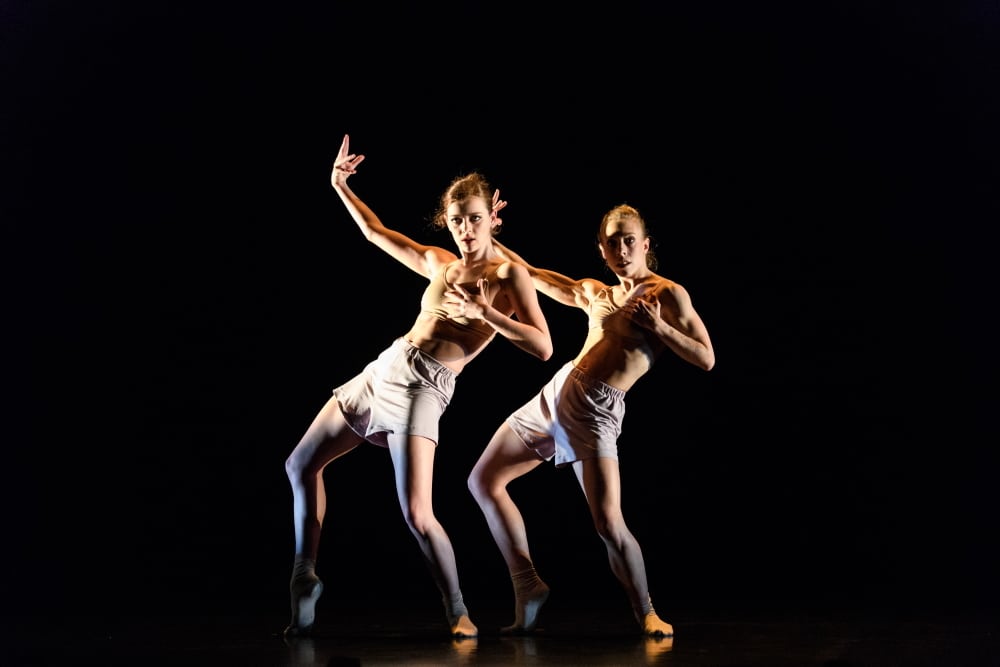 Tonight’s little surprise, a small bonus routine, comes in the form of dancer and choreographer Jack Webb’s incredible new work “Drawn to Drone,” performed by soloist Christopher Harrison and with a hypnotic soundscape by Webb himself. Using two white chairs only, Harrison enters the space, methodically strips down to underwear and sits on the lined-up chairs, tentatively stretching and contorting his limbs, which seem to move independently of his body. His arms and legs raise up in slow motion, and the focus is entirely concentrated on the geometric shapes he creates. He seems like an astronaut on a space flight simulator, where the chairs are becoming like extensions of his body. It is reminiscent at times of David Bowie in Nicolas Roeg’s classic The Man Who Fell to Earth, where the young Bowie sits isolated in a room, an alien in a hostile planet. An intense, mesmerising piece, with almost sci-fi precision, it is impossible to take your eyes off the wonderful Harrison.

Scottish Ballet dancer Sophie Laplane is fast establishing herself as a formidable new force in choreography in her own right. Her previous piece “Maze” was a beautiful study in jagged minimalism. This world premiere, “Sibilo,” which is the Latin for whistle, sees Parisienne Laplane team up with Glasgow-based musician/composer Alex Menzies (aka Alex Smoke when DJ-ing and creating dance music) and is her first time working in a commissioned collaborative piece with a composer. And it couldn’t be more different to “Maze.”

Eight dancers (Sophie Martin, Thomas Edwards, Constance Devernay, Barnaby Rook Bishop, Claire Souet, Victor Zarallo, Mia Thompson and Nicholas Shoesmith) are partnered in groups of two and swap over at the sound of a whistle blowing. It’s a capricious half hour—initially a puzzle, with the dancers manipulating each other as though on springs, bouncing, pushing heads together and using their angular limbs as mysterious codes only they know. There are contemporary moves with the eight dancing mechanically like automatons, or in rebellious Zarallo’s case, simply desperate to throw some Jamaican dancehall rump shakes, struts and shoulder shimmies.

As Menzies’ soundtrack shifts in tone, so too do the various responses to his soundtrack. The idea of whistling as something jolly is explored in a playful 1930s vaudeville routine, where Josephine Baker goofball shapes are emulated, with a frolicksome, almost cartoonish Camel Walk homage. Then it is undone again, transitioning into a lonely whistle in the dark, in Sophie Martin’s gorgeously desolate solo: her dress has lifted up and drifted away leaving her exposed in white underwear, and she dances wistfully with a man’s black suit jacket, which floats ethereally around and above her head like an errant lover.

Laplane’s dance partnerships are fascinating, they follow their own fuzzy logic of longing, loss and loving. There is a surrealist beauty to the latter part of the piece, with items of clothing again used as odd props. Seen in dreamy floating isolation, coats and dresses seem like Rene Magritte’s skewering of conformity. Prosaic nine-to-five life, that of the daily grind, has been replaced with the trajectory of a waking dream. Men dance together, women dance together, then men and women, but never in prescribed ways: this is apposite for the nature of Laplane’s emotionally articulate style. There are bouffon-like transitions in a whistling contest and suit coats shared, with clownish sadness and amplified joy. It’s an attempt to comprehend the paths relationships follow, but more importantly, the strange tangents they take. Hilarious, moving, or absolutely eccentric, there is no second guessing where the dancers will go—such is the beauty of Laplane’s inventive choreography. A potent talent, as with Scottish Ballet, at the height of her powers.