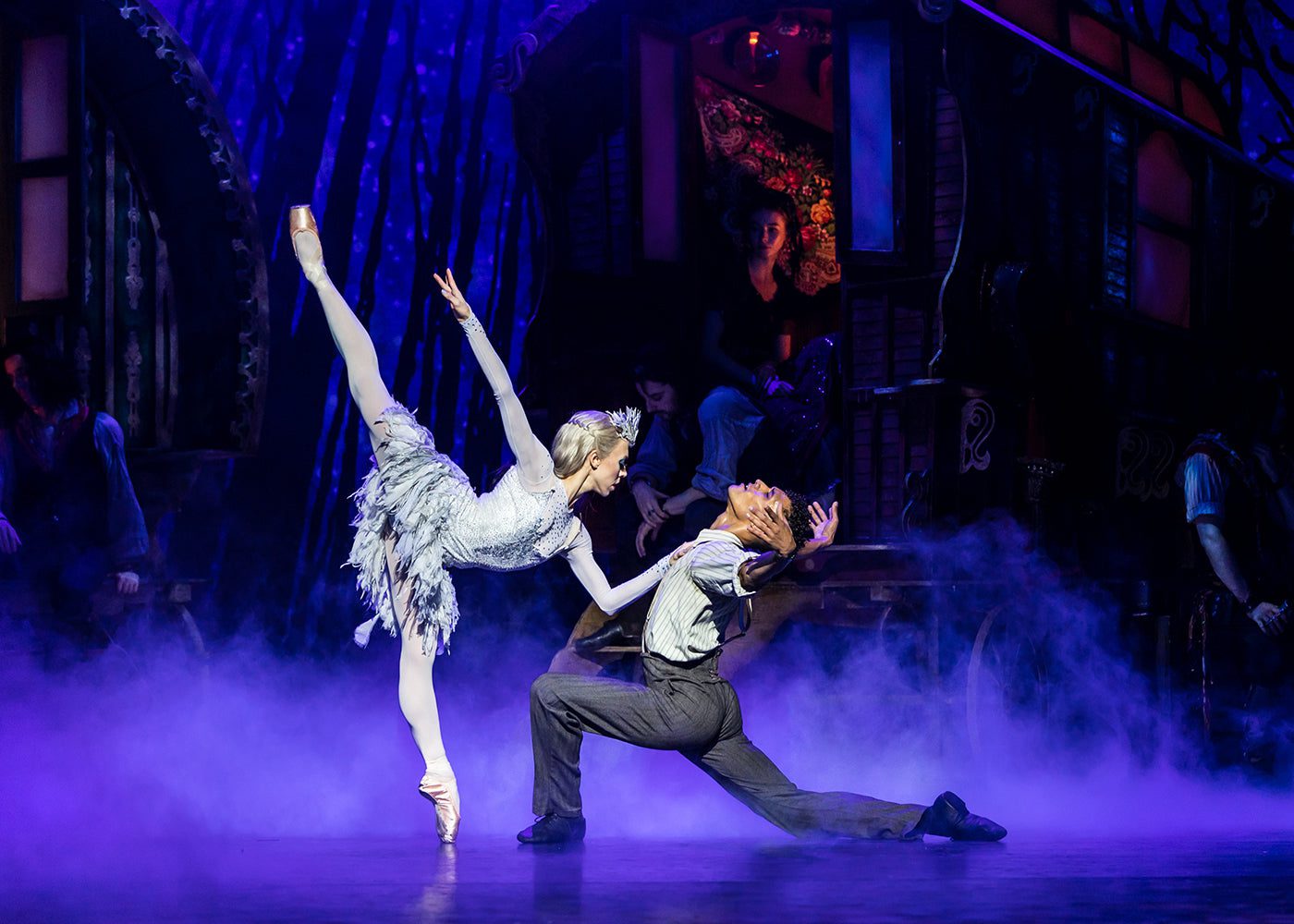 With frost on the ground, and a nip in the air at minus 7 degrees, “The Snow Queen” is back again for another spin—what new approaches and tweaks can we expect from this evergreen winter ballet? Well . . . there’s a carnivalesque approach to this particular iteration, from Scottish Ballet’s artistic director Christopher Hampson, with all of the well-known beats ramped up to campy, but exuberant, levels. The emphasis on disruption of the main narrative is a welcome choice, as the two leads—Anna Williams’ Gerda and Bruno Micchiardi as Kai—while sweet, are a little bland and saccharine—at least, initially.

Duality is stitched into the floor-skimming hemlines of this production. Lez Brotherston’s gorgeous design emphasises this juxtaposition—jagged black edges and  borders which emulate confectionary, a sugary layer as on a cake. So Bethany Kingsley-Garner’s seductive, all-white clad Snow Queen and her rebellious, tomboyish sister, the Summer Queen (a versatile, wildly expressive Kayla-Maree Tarantolo) in her incognito journey towards self-discovery, feel like different sides of the same coin, mired in mischief, desire, and fighting the reductive restrictions of girlhood. That’s nice to see—it leaves the audience rooting for characters with moral complexity as the storyline develops. It’s an exercise in narcissism, but sympathies shift constantly. The sisters fight, but ultimately would fight for each other.

Kai’s witty solo to Rimsy-Korsakov’s classic “Flight of the Bumblebee” is remarkable, as the first spell by the temptress is cast—he claws at himself, and wildly spins almost off-balance, and the implication is that of fervour lurking underneath his oh-so sensible, ‘good boy’ Scandinavian knitwear. That is always an appealing factor, not always easy to achieve. Passion under the surface is a key factor in many, many scenes—again, the implicit restraint and undercurrents.

The clowns, too, portrayed by Eado Turgeman and Joel Wright on Puckish form, provide the wickedly vaudevillian interlude—a feat of almost bouffon-esque physical comedy as they tumble, roll, and bump stomachs in the circus scenes in the first half—pricking the solemnity of young lovers and their chaste, moony-eyed, romantic pas de deux. It’s a cheeky nod to the vintage of silent cinema, and the many clowns of the silver screen that preceded them, but also a lovely, knowing bit of choreography from Hampson. It roots the piece in a timeless space.

The nuances of sexual desire make for the most interesting moments. Kingsley-Garner and Micchiardi’s chemistry together is palpable, yet always understated. Their pointe work is flawless. There is just enough in the lifts between the spellbound Kai and the minxy, imperious Queen to imply a potentially sizzling coupling. Williams’ frustration as Gerda means she’s given less to do than react to the burgeoning affair on the sidelines, but at least her solo has a little soul. However, the groupwork, as ever, remains the company’s strong suit—this is most evident in the wild, whirling gypsy dance sequence, with all of the fire and passion in the ensemble—leaping and strutting, the dynamics of joy and celebration twisting into something a little darker when Gerda attempts to win back Kai, and is met with resistance as a whole circle of dancers close in on her.

So there’s real sharp teeth here. With the rise of narcissism via social media this year, it’s not too much of a stretch to see toxic femininity and lovebombing within the Queen and Kai’s dreamy, if dangerous, duets. The Snow Queen is a dubious presence. Beauty can come with nasty, unseen insidiousness to its wide smiles, and there are red flags lurking everywhere, once you know where to look. The Snow Queen is not in it for the long haul, but only as long as a selfie on Snapchat, you might say. “Parties aren’t meant to last,” to quote Prince. There is always a sense of preening perfectionism, of wanting to be adored and seen. Mirrors festoon the space, reinforcing the infinite voyeurism. Sure, the ending may be a little too rounded off and neatly resolved, but it’s a hell of a fun ride in the meantime. The subtext too, is pointed and intelligent: don’t ever trust the charismatic intruder.