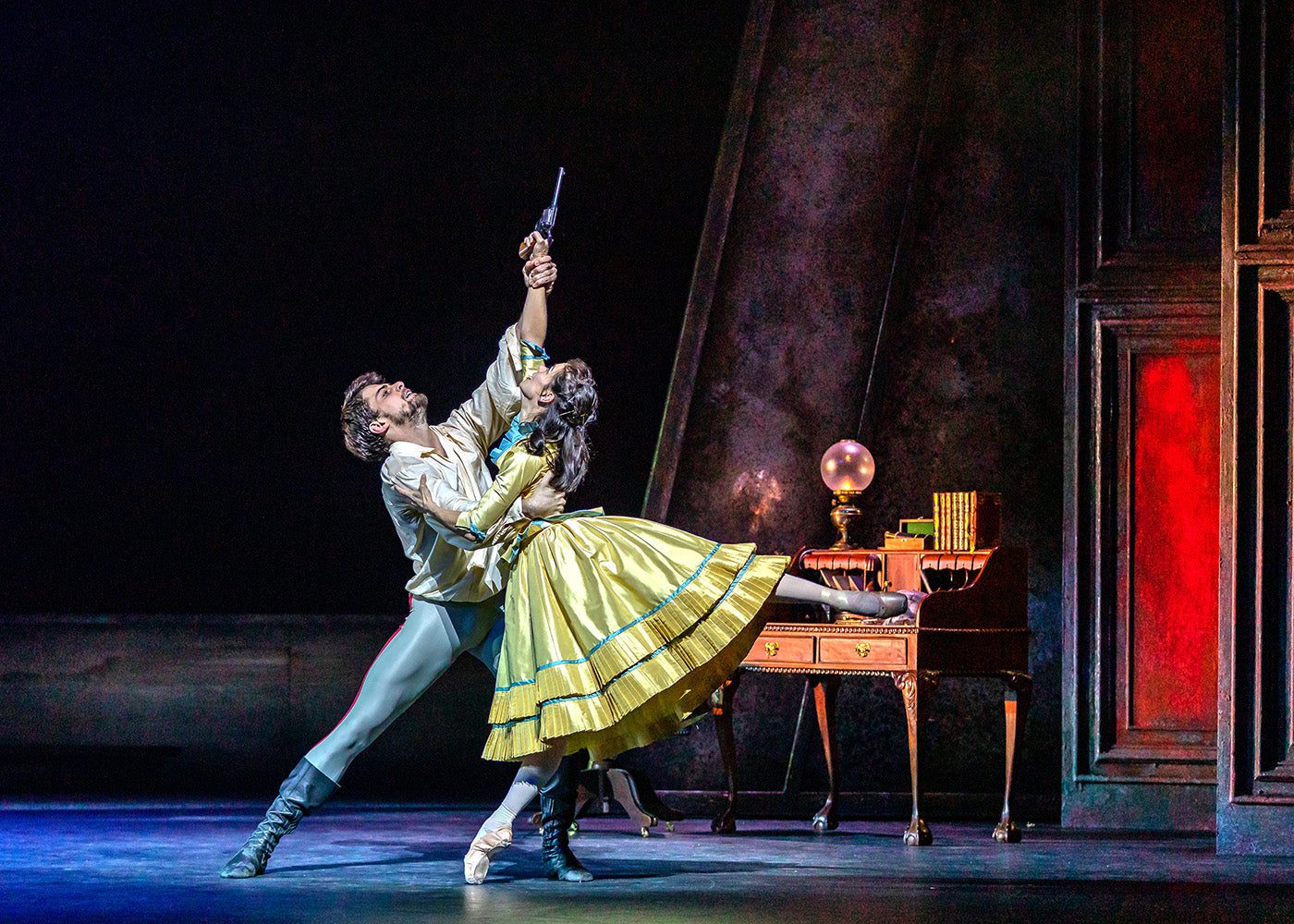 Scottish Ballet's “The Scandal at Mayerling”

With the dust settling on the recent infamous UK royal family allegations around Prince Andrew, Scottish Ballet’s artistic director Christopher Hampson and director Gary Harris’ adaptation of the controversial Kenneth MacMillan ballet from 1978 feels timely indeed. Based on a true story which shocked society to the core, the plot centres on the wanton destruction in the royal court of Austria in 1889 caused by the Crown Prince Rudolf, his many mistresses, wife, and his ultimate demise. It’s a wild study in toxic masculinity in general.

Immaculately staged—Elin Steele’s sumptuous set and costumes are reminiscent of the recent remake of Gothic ballet horror film Suspiria; augmented by eerie video design from Hayley Egan bookending the production—“The Scandal at Mayerling” drips with opulence and decadence alike. The colour palette is suggestive of gore, yet not a drop of blood is spilled; all is implied through the reds, blacks and lusty pinks. The live orchestra perform Liszt’s romantic but elegiac score gloriously.

After a slightly wobbly start (first night nerves, perhaps) Evan Loudon settles into his lead role as Prince Rudolf admirably, and with no amount of challenges—he is present on the stage almost constantly, and it is a hugely physically demanding character study. He is the epitome of entitled malignant narcissism—a whirling, strutting, deeply troubled but spoiled brat scything his way through ballrooms, whore houses, royal courts and bedrooms. He swaggers, preens, and in one uncomfortable scene, forces himself on his new young bride Princess Stephanie (Constance Devernay) whom he pulls and throws around like a ragdoll, before pouncing on and sexually assaulting her.

MacMillan’s choreography isn’t subtle, then—at its best, elegant, pacy and stately; at its worst, gestural and almost depicting madness with a cartoonish villainy, all gnashing teeth and a Shakespearian skull—but the storytelling is skilfully woven and the ensemble work absolutely flawless.What makes it all so compelling is the way it unfurls slowly—Loudon is a charming, debonair presence in the ballroom waltz at the onset, seducing the audience as much as his suitors, who literally fall and swoon at his feet. But then the mask slips, and the drug addiction, violence and mother issues surface. It’s like poison being slowly sucked out, lovebombing in psychological terms, turning into devaluing and discarding as the Prince sees fit, governed by his terrible impulses and the silent enabling from others.

Each pas de deux Loudon performs adds another layer to the Mayerling saga—there’s an embittered duet which is a battle of wills with Rudolf’s mother Empress Elizabeth (a stunning Marge Hendrick flexing her acting muscles wonderfully as the concerned matriarch); the aforementioned scene with Devernay, a flirtation with naive, wide-eyed Princess Louise (Kayla-Maree Tarantolo) and a lusty moment with slinky, worldly mistress Mitzi Caspar (Bethany Kingsley-Garner) in a brothel. You are rather left wondering, as yet another lady is seduced then abandoned, when the young man had time to sleep or eat!

The final scenes with willowy new lover Mary Vetsera are the most intense, their pairing both dangerous and lusty as they tentatively enter into their fateful suicide pact. There’s an audible gasp from the audience as a gun is produced. Here, Sophie Martin makes a superb foil for her Prince as Mary, despite her seventeen years—she is as much a wilful, intelligent presence as poor masochistic Princess Stephanie is lacking in agency. They emulate passionate foreplay, clinging together like small animals. Martin’s mistress fights and claws back too—it seems apparent that only one girl could be a match for Rudolf’s machismo, and Martin’s a perfect choice—small, impish and energetic—yet cunning when she needs to be. These couplings are disturbing in their authenticity, if a bit drawn-out, laterally.

Yet, this is only one side to the piece—there are many playful interjections too. The brothel scene is steeped in erotically-charged dancing, of course, but it’s tempered by a scene where the sex workers, clad in fabulous corsets, bloomers and bright tights, perform a modern, almost parodic bump and grind shimmy like little peahens. I found myself thinking of the neo-Burlesque of Pussycat Dolls’ “Don’t Cha,” Dita Von Teese’s furs and tassels, and Baz Luhrmann’s Moulin Rouge alike. It’s deliberately cheeky, playing with 19th century stereotypes, culminating in an almost Keystone Cops moment, when somewhat bumbling police bust in to break up the party.

Hungarian and Russian folk influences loom large too, as much of the choreography has a distinctly folk sensibility. The male groupwork is evocative of Cossack dances and circle dances, played both with a straight bat and much humour. Bruno Micchiardi’s comic chops are a nice antidote to the madness and destruction—his vaudeville-inspired solo is hilarious, charming and enormous fun—a source of levity offsetting the angst and gloom beautifully.

So it’s not without its flaws—longeurs towards the end feel a bit lethargic—but in the main, the production crackles with lust, tension and a macabre, shivery denouement. It’s a gripping tale, with unexpected twists. The story endures, not just because it’s true, but as the themes remain sadly still pertinent to this very day. The over-indulged rich kids will always lash out, to their detriment, and become the authors of their own downfall.