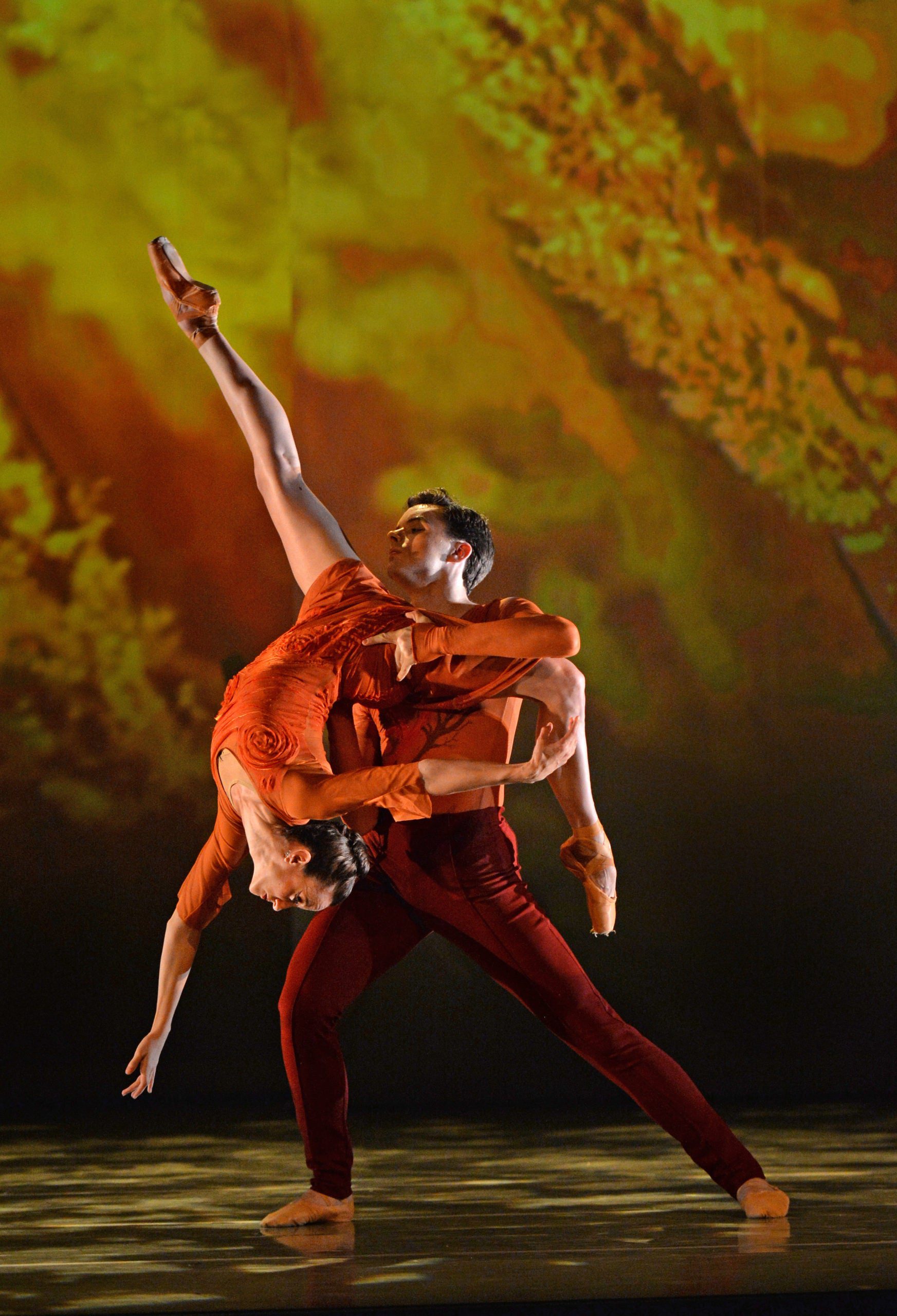 Watching Sasha Janes’ “The Four Seasons” is like reliving the best year of your life, if your life was a ballet.

The Australian choreographer’s expansive take on 12 months of love, joy and contemplation was remounted July 5 at the Chautauqua Institution, a summer community and arts festival in Western New York that has been Charlotte Ballet’s summer home since 1996.

It was an imperfect but still enthralling performance during a season of change for this company, for Chautauqua and for Janes.

Last year Jean-Pierre Bonnefoux stepped down from serving as artistic director of Charlotte Ballet (formerly North Carolina Dance Theatre, a name easily confused with Raleigh’s Carolina Ballet). Bonnefoux’s wife, fellow New York City Ballet star Patricia McBride, has stayed on as associate artistic director, while Janes, a former dancer with the company, continues as resident choreographer. He was a top contender to succeed Bonnefoux, but the company’s board instead picked Hope Muir, a Canadian who at the time was second in command at Scottish Ballet.

Janes and his family headed west, where he took a visiting faculty gig at Indiana University and will begin working as an associate professor in August. This summer, he reunited with Bonnefoux and McBride to teach at Chautauqua’s summer dance intensive, which continues to attract students from SAB and other top schools. Charlotte Ballet now comes Chautauqua, led by Muir, for a three-week summer residency compared to up to eight in years past.

Follow all that? At Chautauqua, Charlotte Ballet’s dancers, Bonnefoux, Janes, McBride and Muir are all one big step family. Judging by the second of three performances, this summer’s residency is full of mutual inspiration, bittersweet appreciation and awkward moments.

And yet, this audience remains fiercely loyal to Janes. For nearly a decade, he’s had the rare luxury of using Chautauqua as a creative laboratory, like an out-of-town tryout for a Broadway show. In 2013, for example, he debuted excerpts—with live orchestra!—from his “Carmen” two months before it premiered in Charlotte.

You’d be hard pressed to find another audience outside of New York City that gets this excited by new contemporary ballet. Thursday’s show found the 4,300-seat amphitheater about 2/3s full. The abbreviated residency—instituted by changing leadership at Chautauqua, not just changes in company leadership—means Janes now creates on students rather than Charlotte’s professional dancers, and Chautauqua audiences see Janes’ professional ballets after Charlotte.

At intermission last Thursday, the woman in front of me made a show of holding out her program and sweeping her hand across the casting list for “Spring,” “Summer,” “Fall” and “Winter.”

“The Four Seasons” followed Mark Diamond’s “Scherzo,” a suite set to Beethoven’s 9th symphony. The angular arm movement and sharp point work was meant to deliberately contrast with the romantic music, but sometimes just looked awkward. Juwan Alston had a particularly bad outing, falling sideways when he tried to exit a pirouette on one knee. Then again, he and Ben Ingel had the tough task of partnering nine women in this female-centric ballet. (Josh Hall, Charlotte Ballet’s top male dancer, is out for the summer after undergoing shoulder surgery.)

“Scherzo” was not what audience members like the Sasha Janes’ fan in front of me came to see. “The Four Seasons” debuted in 2016, and followed the company to Chautauqua that summer, with Janes stepping in to perform the opening pas de deux for Hall.

Hall was dealing with a foot injury that summer, but when he’s healthy, he’s very good. (McBride has cast him as Apollo, and the lead in “Who Cares?” The company certainly could have used him this month: The men—including three apprentices from the summer intensive—were not strong. Under Janes and Bonnefoux, Charlotte Ballet’s trained some excellent male dancers, including Pete Leo Walker (Aspen Sante Fe Ballet) and Jordan Leeper (Atlanta Ballet). The leading ladies, meanwhile, have often stuck around and remained consistent marvels.

Chelsea Dumas, Alessandra Ball James, Sarah Hayes Harkins and Elizabeth Truell all came of age under McBride, who was Balanchine’s go-to muse when it came to developing character roles. She was his impetuous Hermia in “A Midsummer Night’s Dream” and his Swanhilda with no understudy in “Coppélia.” She trains ballerinas to be both consistent technicians and unexpectedly expressive. When Peter Martins stepped down from running City Ballet amidst scandal earlier this year, McBride was invited to come coach her former roles in New York and the dancers treated her like a visiting Instagram goddess.

But North Carolina—and Chautauqua—have been blessed by McBride all along. And Sasha Janes has benefitted as the choreographer given free rein to choreograph on Charlotte’s exquisite dancers. That said, this “Four Seasons” remount makes it clear that higher-echelon companies now need to step up and stage Janes’ ballets, and “The Four Seasons” is a prime candidate to export.

That said, this “Four Seasons” remount makes it clear that higher-echelon companies now need to step up and stage Janes’ ballets, and “The Four Seasons” is a prime candidate to export.

Janes very smartly lets the ballet begin with the first movement of Vivaldi’s violin concerto serving as an overture. (“It’s spring! Let us sing Vi-val-di!” is how I always remember the chirpy melody.) Then comes the adagio, and in walks Harkins on Ingel’s arm, like Persephone back from the Underworld. Like so many of Janes’ ballets “Four Seasons” is full of distinct lifts that never look awkward. That’s because Janes began choreographing in 2006, six years before he and his wife Rebecca Carmazzi retired from the company. These are lifts designed for partners who trust each other and have great chemistry, which one could argue all the best couples in ballet do. “Spring” features several great examples, including several straight-arm lifts that require Harkins to brace her hands against Ingel’s palms while he rotates them both across the stage as a vision in pale pink.

The costumes (by Aimee J. Coleman) feature delicate appliqué flowers, but rather than dressing the women in conventionally romantic skirts, Harkins only wore a leotard and the corps dancers had a short tulle overlay. In the final movement, even partners of the opposite sex had a chance for a spring fling.

This “Summer” is no place for beach-ball brights, rather, the dancers don purple hot pants and mesh overlay tops that resemble a night sky split by heat lightning. The choreography is equally surprising. Janes smoothly alternates between choreographing to the music and simply using the orchestra to depict a mood. Instead of conjuring up a frenetic “Summer” storm, Janes deployed his most erotic imagery in the second concerto; Dumas and Ingel sending sparks flying merely by standing opposite each other and seductively entwining their hands during the adagio, while Peter Mazurowski closed out the final movement as a solo whirling dervish.

Fall was reserved for courtly love, and Janes’ cheekiest interpretation of Vivaldi’s music, well played by the Chautauqua Symphony Orchestra in the pit. A quartet of ladies took themselves to an autumnal ball, dressed in wide red skirts which they soon stepped out of and left standing onstage. (Detachable skirts are one of Janes’ favourite costume tricks.)

James took the lead in the slow movement, like a Renaissance lady in waiting emboldened once she loses the bulky skirt. Colby Foss was her able partner, draping James over his shoulder by one leg while she artfully curved her body upside down and hung parallel to his torso.

“Winter’s” soothing strings were not for snuggling in a sleigh, but for solitary reflection. McBride and Bonnefoux have long attracted dancers of color to the company, and Alston and Raven Barkley, who are both African American, reprised regal solos from the “Four Seasons” premiere. The movement is as striking as their appearance; Barkley wears a long coat over white tights, and Alston merely wore the tights, tracing his own fingers over bare arms, beset more with unease than chills.

The final season closed out the night with all 18 dancers onstage in neck-to-toe white. Audiences have to hope that in this case, the color represents not bleakness, but a clean slate of hope for the future, for the dancers, for this company and for an incredibly gifted choreographer.