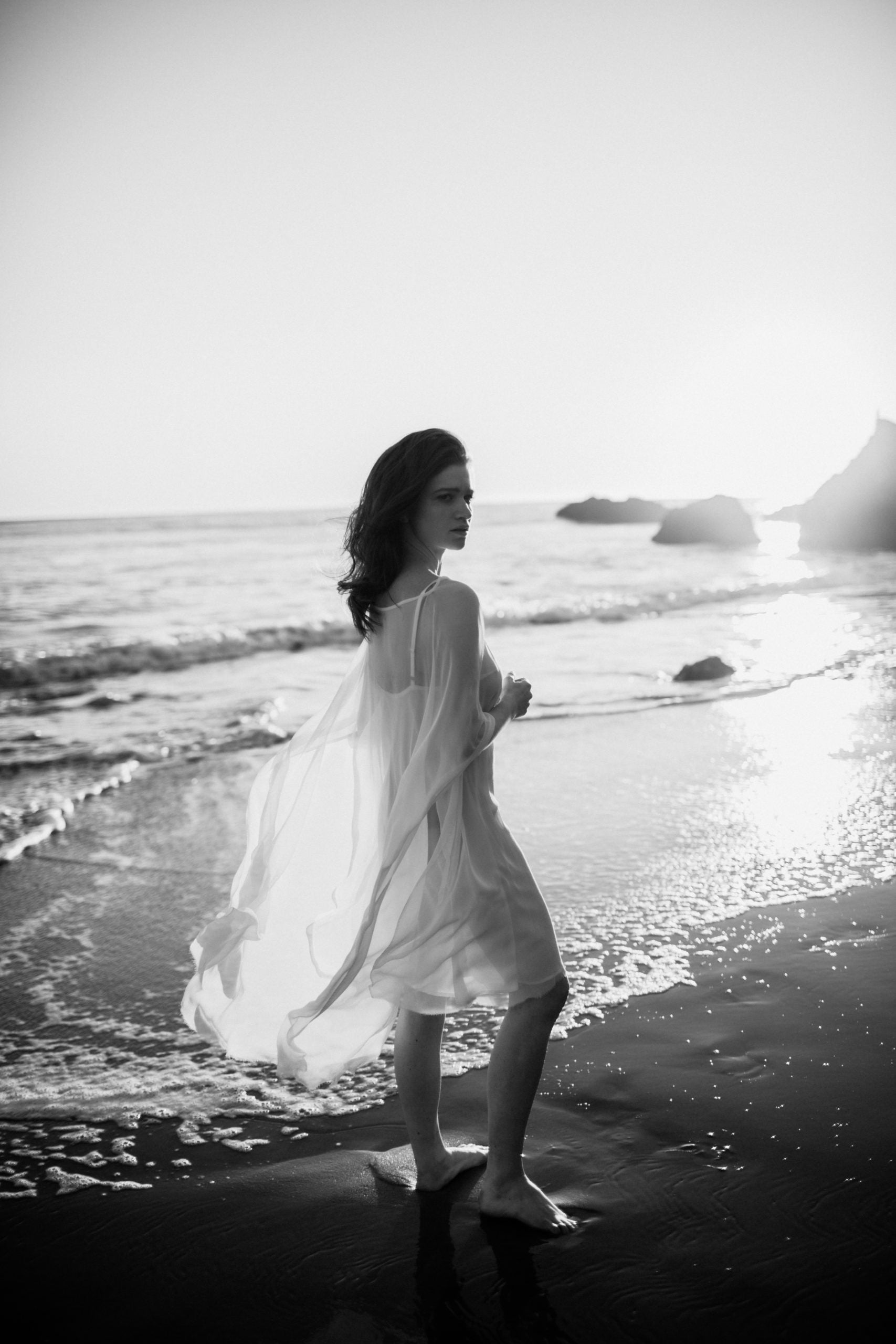 Lines in the Sand: Sarah Hay

Sarah Hay, dancer-turned-actor and star of Starz channel 2015 TV drama, “Flesh and Bone,” recently moved to Los Angeles to pursue her acting career.  We took a walk with her on the beach as she talked us through her transition from stage to studio. Photographs by Karolina Kuras, dresses by Louiza Babouryan.

“I love being so close to the beach and the water,” Sarah Hay says, smoothing her auburn hair out of her face. “I’m used to being away from family, but I’ve found that it’s been very inspirational actually to go on a journey alone—I’ve never done that before. I’ve always had the comfort of people supporting me; now, it’s mainly over the phone.”

Hay moved from Dresden, Germany where she was a principal with Semperoper Ballett to the City of Angels to pursue her acting career. Of her seachange, she says, “the day to day stress is minimal. If I have an audition it’s stressful but aside from that I feel like I’ve been on vacation for a year.”

Compared to the daily rigour of a ballet company, perhaps. Hay has been far from idle, however, having just finished shooting “I’m Dying Up Here,” a Showtime TV series produced by Jim Carrey about comedians trying to make it in L.A in the 70s.

Hay joins a talented cast to play Tawny, the heroine-addicted girlfriend of the newest comic on the scene. “It’s sad, and also really fun; a lot of tragedy with comedy,” she says. The ten-episode series is currently airing on Showtime.

Hay also landed a leading role in “Room 104,” a new series created by Jay and Mark Duplass, set to debut on HBO on July 28, 2017. The series is set in a single room of an American hotel, and explores characters who pass through it in each episode. “It’s more artsy, and I don’t speak at all and I’m the lead, so it’s interesting. It’s all done with expression.”

Which comes naturally to Hay. “As a dancer, you’re so focused on your body, sometimes you lose the acting. For me it’s always been the opposite. I was always emoting what the character was trying to say, and now I find that you can do that just with your face.”

Hay, originally from New Jersey, has been dancing since she was three years old. From a musical family, Hay’s grandfather played violin in the New York Philharmonic under the baton of acclaimed conductor Leonard Bernstein. “I grew up underneath the piano in my house with people playing Chopin. So I was in love from music from birth.”

Hay trained at the School of American Ballet before joining Dresden’s Semperoper Ballett, where she danced as a soloist and principal. She has had a tempestuous relationship with ballet, feeling the pressure to conform to a ballet stereotype that didn’t fit her, or her curvy physique.

“Everyone has a different relationship with it [ballet]. Some people take it as a lifestyle. That’s sort of what you have to be to be the best you can at it; but for me, I love it, I cry when I watch it, I have to do it—but at the same time I had so many other creative outlets, and I felt a little bit stuck,” she says.

Her introduction to acting came early; a part in an Olsen Twin movie when she was nine years old. She was also cast in Darren Aronofsky’s 2010 film, “Black Swan,” but at the time she was focussed on her ballet career and she hadn’t considered acting a real possibility.

“I started to feel like maybe I could do this, but I never pursued it. Darren Aronofsky put me in a lot of scenes and featured me a lot; but I never thought this would happen.”

Then came “Flesh and Bone,” where Hay played Claire, a ballet ingenue who is cast into the jungle that is the world of professional ballet. Having taken the audition without too much thought, she was hired virtually on the spot by former American Ballet Theatre star Ethan Stiefel, the show’s choreographer, who had already seen hundreds of dancers vying for the part.

“The character just needed so much, and maybe because I’ve been through so much in my life, it just fell into place,” Hay says. Created by former “Breaking Bad” writer and producer Moira Walley-Beckett and longtime Quentin Tarantino collaborator Lawrence Bender, “Flesh and Bone” was a decidedly sexy, savage take on company life.

Hay, who was nominated for a Golden Globe in 2016 for the part, says, “I felt like if I don’t take the opportunity now as an actress, I may not get it again. You’re so replaceable in both of these worlds, you have to jump on opportunities that come at you.”

Yet at the time Hay was dancing as a principal in Dresden, and enjoying it. “It was terrifying to leave my company and try something totally new. I was so attached to the people there and I was doing well. It was the first big company that accepted me and let me do big roles.”

Now that acting is her focus, she’s finding herself more and more in it. “I’m definitely more actor than dancer. I’m much more in my own skin now that I’ve been acting, and not so worried about everything being perfect all the time. My stress levels have gone down a bit. It’s such a weird thing that happened to my life, so circumstantially I had to go for it.”

And her love of dancing is evolving. “When I was younger it was all aesthetic, and now I feel it’s the work ethic; I love the work to it. I appreciate having to put so much energy and mental focus into something, and it’s different from just being pretty in a tutu,” she says.

As well as a change of scenery, her creative routine has shifted. “It’s been really challenging not dancing and trying to stay creative in such a competitive field. With ballet you can dance everyday and you can’t act every day.”

The constant auditions also take some getting used to: “With dancing you audition maximum once a year to try to get into a company. I didn’t audition for six years with Dresden. Here, I’ll have an audition sometimes everyday that lasts for 30 seconds.”

And in spite of her successes, they don’t always go so well. “I had an audition that felt just like that scene in La La Land, but even more demeaning! Ballet can be tough, but this is a whole different animal,” she says, adding, “it’s hard to fit the mould of what they’re looking for, just like in the ballet world.”

Reflecting on her career in ballet, Hay says it’s important for ballet companies “to embrace uniqueness. The world is going backwards in time, where there is more and more animosity towards what’s different. I wish the dance world would embrace not only body type but personality, so we don’t have to be like everybody else all the time.”