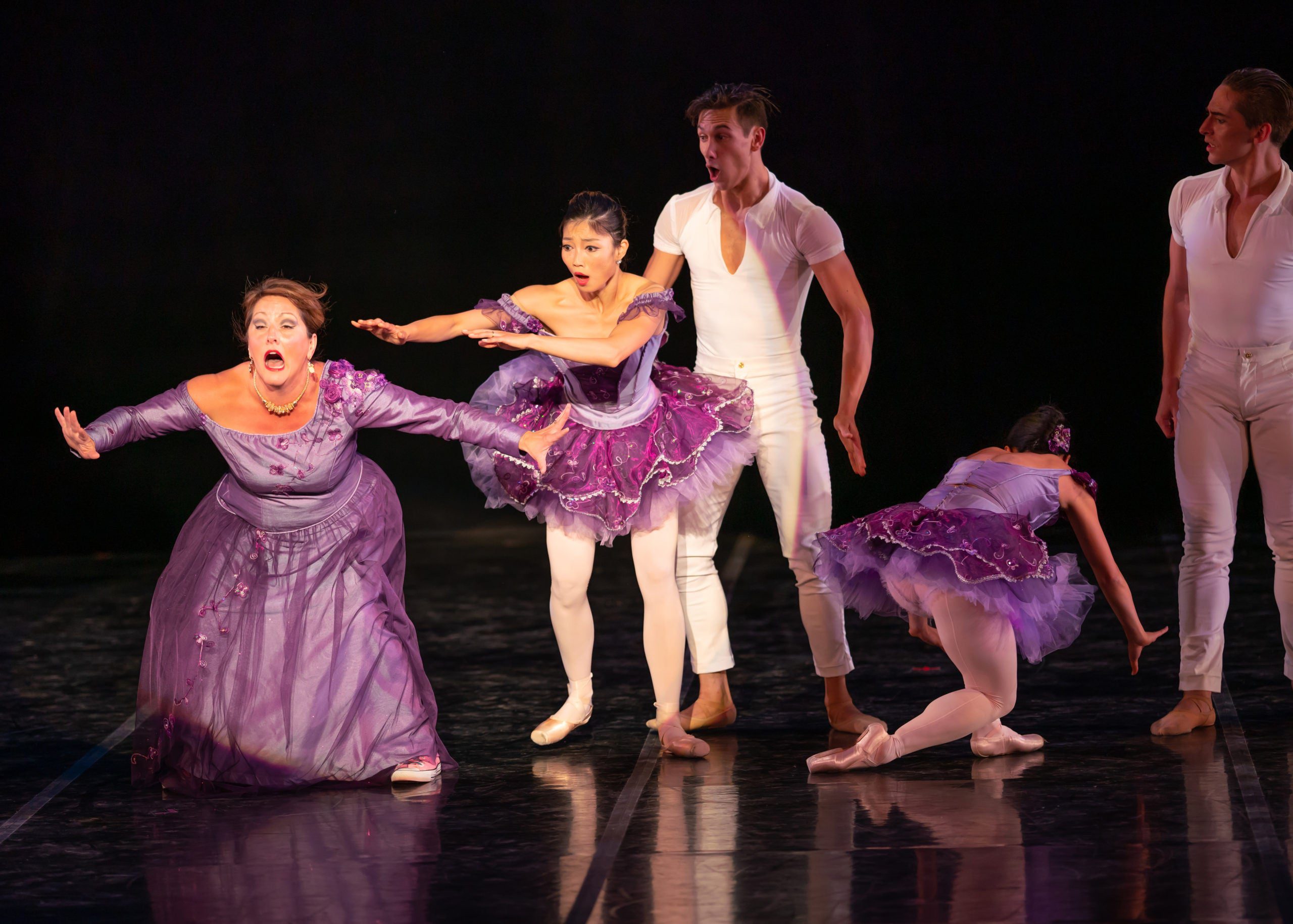 I don’t live in Sacramento—state capital of California, the world’s sixth biggest economy—but I half wish I did after catching “Mozart in Motion,” the Sacramento Ballet’s mixed-bill opener for its second season under new artistic director Amy Seiwert. From a corner of Midtown Sac, the year-old, $29 million Sofia Center gleamed with twinkly lights against fashionably angled concrete. Inside, diverse patrons dressed in architect-chic took their glasses of Pinot Gris inside the well-equipped, pine-paneled and burnt-orange upholstered 365-seat theater, one of two performance spaces in the complex. Most appealing of all, when the curtain went up: A company of 21 technically powerful, stylistically refined dancers, any of whom could be corps members (or in some cases, soloists) in major companies.

Seiwert inherited many of these dancers from Sacramento Ballet’s former directors of nearly three decades, Ron Cunningham and Carinne Binda, who were ousted in 2017 after a lengthy and bitter battle with the ballet’s board. Whether Seiwert has raised the caliber or changed the style of the dancers I can’t say, having not seen the company itself before Seiwert’s direction, but only caught certain star Sacramento Ballet dancers (like Charlie Neshyba-Hodges, who became a leading Twyla Tharp interpreter) with other pickup companies. Where the changes are obvious is in the repertory.

Pre-Seiwert, Sacramento Ballet was heavy on Balanchine and works by artistic director Cunningham. Now Seiwert is keeping the neo-classicist style but axing Balanchine, emphasizing gender equity and diversity in the choreographers she commissions. This is both needed and savvy, a way for Sacramento Ballet to stand out in the national field. (As her own program bio notes, Seiwert is one of just seven women to currently lead a US professional ballet company, and only the fourth woman to choreograph a “Nutcracker” production—her new staging premiered last December.) I’ll admit I wish at least a smidge of the Balanchine rep would stay, not least because experiencing the musically ingenious structure of his ballets helps emerging choreographers learn how to make compelling works of their own, and Sacramento Ballet’s season includes a whole spring program of works by company members who want to try choreography. But in general Seiwert’s repertory vision is smart and promising, though it produced a program of uneven interest for this trio of ballets set to Mozart.

The popular hit of the evening was “On the Rocks, Please!” a commission from Darrell Grand Moultrie, an in-demand Broadway choreographer who made his first work for Alvin Ailey American Dance Theater last spring. Also a choreographer for one of Beyonce’s world tours, Moultrie knows how to work the crowd. In this twist on Mozart’s “Twinkle Twinkle Little Star” melody, he seemed inspired by Jerome Robbins’ “The Concert,” putting the pianist and flutist onstage, then sending out a busty drunken soprano, the brilliantly comic Carrie Hennessey, to bumble about through the five dancers’ best attempts to present respectable classical ballet. Hennessey ogled the men, swatted away the women, and got her Bel Canto vocal rocks off in a demeanor reminiscent of the boozy Mrs. Stahlbaum in Mark Morris’s “The Hard Nut.” Drawing guffaws from young and old—and safe for kids despite the drunken pretext—this commission will surely be a great asset for school and community performances. The excellent Ben Youngstone and Alexander Cain Biber were elegantly straight-faced throughout, Lord knows how.

These hijinks were quite a contrast with the opening, Seiwert’s take on Mozart’s Requiem, using the stripped-down Richard Maunder edition of Mozart’s unfinished final work. This ballet is a fine example of the choreographic strengths that manifested in Seiwert’s work the moment she began making dances, at Smuin Ballet, twenty years ago: busy, strong staccato arms that sometimes involve a roiling upper body, swift partnering, unison dancing that isn’t afraid to make the women land heavily in wide second plié.

This ballet is a fine example of the choreographic strengths that manifested in Seiwert’s work the moment she began making dances, at Smuin Ballet, twenty years ago: busy, strong staccato arms that sometimes involve a roiling upper body, swift partnering, unison dancing that isn’t afraid to make the women land heavily in wide second plié.

This requiem catches flight during a whirlwind series of trios and solos, in which Shania Rasmussen was particularly breathtaking. But it peaks mid-way, at the end of the “Amen” fugue that follows the Lacrimosa. For that stunning moment, a veil falls from the rafters, and two dancers partner each other inside the white tulle as though shrouded in incense, or dancing in the other world. The audience gasped. And then the ballet carried on. And on. This is a problem inherent in the score, but Seiwert did not find a solution, and it might have been stronger to use the dancing inside the veil as a structural element rather than a one-off effect.

The swift-flowing closer was by Jodie Gates, once a leading dancer for William Forsythe’s Ballett Frankfurt, now the vice dean of the University of Southern California’s Glorya Kaufman School of Dance, and a native of Sacramento who trained with Sacramento Ballet founder Barbara Crockett—who knew? “Embellish,” commissioned in 2012 by Colorado Ballet, features inventive partnering, brisk duets, and exciting full ensemble bursts for a cast of 12 who can blast in and out from a slit in the back curtain. It also has gorgeous, sleek teal and rust costumes credited here only to the Sacramento Ballet wardrobe department. What it doesn’t have is larger coherency, or any unifying idea. So it was a blur, but a vivaciously danced one, with Bobby Briscoe especially fleet.

After “Nutcracker,” Seiwert’s second season will flow into a late-January program of ballets made by company dancers and mentored by seasoned freelance choreographer Val Caniparoli; then comes “Homegrown,” a festival of new works, in which one Sacramento Ballet dancer will continue developing his choreography, while contributions from nationally emerging choreographers—Jennifer Archibald and Nicole Haskins—fill out the program. And May’s “Fast Forward” program will bring works by Seiwert, Caniparoli, and Trey McIntyre. Sacramento Ballet’s future is here and it looks promising.

Next
Fall for Dance