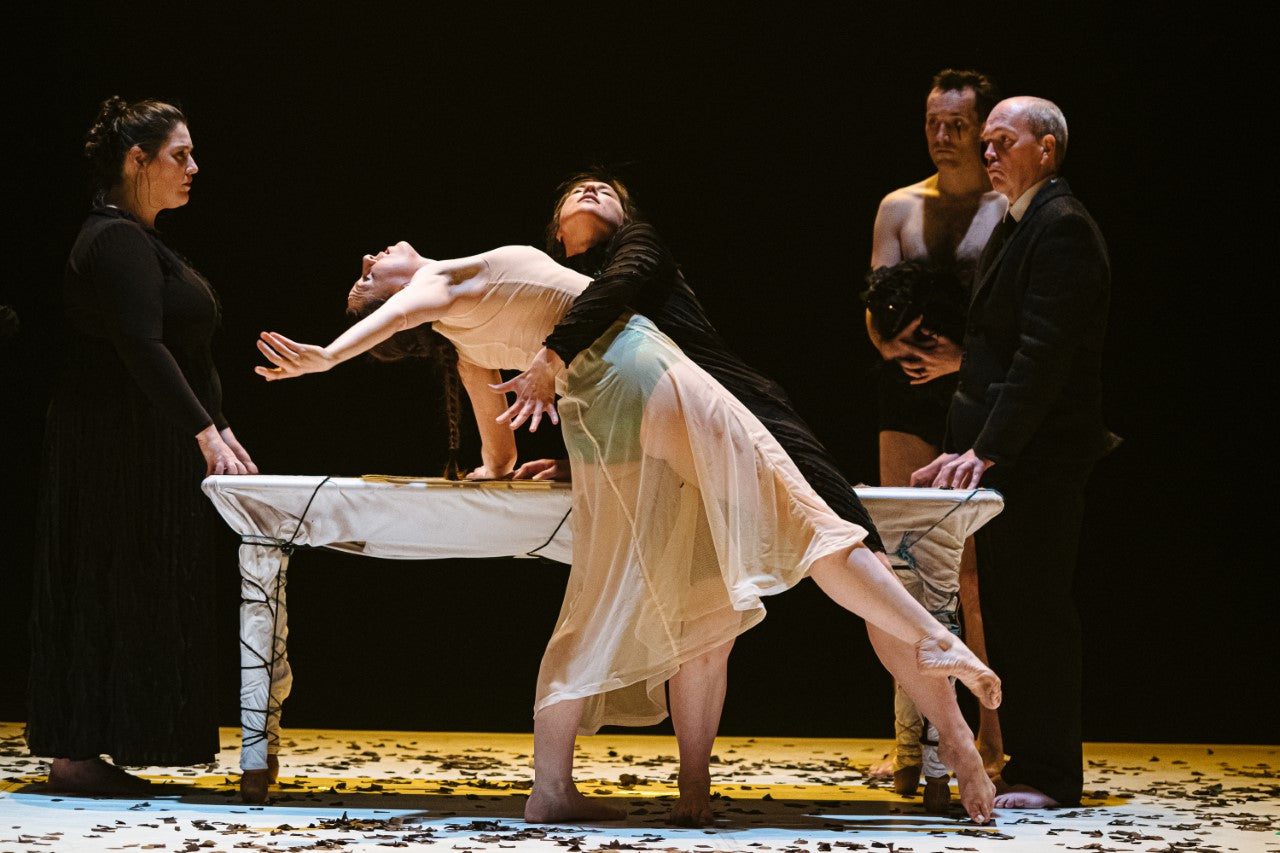 The scenography here, from the ever-inspiring designer Alison Brown, is truly striking: black confetti on a clinical white floor; spiky masked not-quite-human creatures, elusive faces turned away, eerie white bound furniture, which is decorative as well as functional. Brown’s black and white flimsy costumes act as sheaths (called winding sheets in ancient Celtic culture) both encasing and exposing the slender bodies underneath. This is “Endling,” Rob Heaslip’s disquieting Gaelic meditation on death and the ritual of condolences and care. The sounds, created by composer Michael John McCarthy, range from birdsong to guttural, slurping sounds, drones to choppy electronica, and there is beautiful and unnerving singing from vocalists Michelle O’ Rourke, Gillebride MacMillan and Robbie Blake. The styles of their vocals are very much akin to throat singing, baroque and chants, and are absolutely spellbinding.

Heaslip is asking the audience to consider a dying species, and by extension, the end of days. When a loved one is gone, how do the remaining friends and family members carry on? With the last ones all gone, is it time to give up? And do we eulogise, or celebrate, the life that was, with little time remaining? The clock is ticking. Here, the four dancers, who seem to be spirits of living forms, bob and weave around a mysterious space, which looks like a dining room at the edges of the world. Tamsyn Russell, Astrid Sweeney, Evan Schwarz and Marion Cronin move as though in a dream. Sometimes, they are swathed in shadow.

The spirits place hands over eyes, on lungs, thighs, waists—all to protect and keep the body safe. They move like shadows, an alter-ego, an extra layer. In one instance, they move in one twitching unit, a composite of “human,” comprised of many.

When Astrid Sweeney’s prone form, in its transparent gauze, is laid on its side, she is rocked as though she were a baby once more by O’Rourke, like a mysterious matriarch singing Gaelic plainsong in place of lullaby. We hold the newly borns; so too, we hold the ones leaving. Vocalist Robbie Blake is undressed and laid out on a table, as though ready for a Catholic wake where the family come to pay their last respects. He looks so fragile and pale, yet tranquil.

But there is an opacity to Heaslip’s scenes at times, with multiple meanings tilted over puzzling abstraction. A large, heavy-looking wooden plank is carried—the why is never made clear. Is it to represent the burden of humanity, or a coffin before it takes on the form of such? Could it be a standing stone from an ancient burial ground? Why do the ensemble ecstatically bounce on their heels at the end, as though attending a rave? Is this a natural reaction to mournfulness, an antidote to sorrow? Restraint is not always appropriate, when the heart aches so much, and the deceased was once a playful and loving presence.

Restraint is not always appropriate, when the heart aches so much, and the deceased was once a playful and loving presence.

Because of these queries, which hang heavy in the air, “Endling” remains almost otherwordly and slippery, hard to place. Gaps are left to the viewer to interpret as they see fit. Heaslip’s gestural decisions often add little to the understanding of funerary practices and ritual. But the early scenes with the spirits guiding the dying are arguably the most beautiful, lending a suitably poignant air and subtle melancholy to the piece.

Next
Mozart in Motion