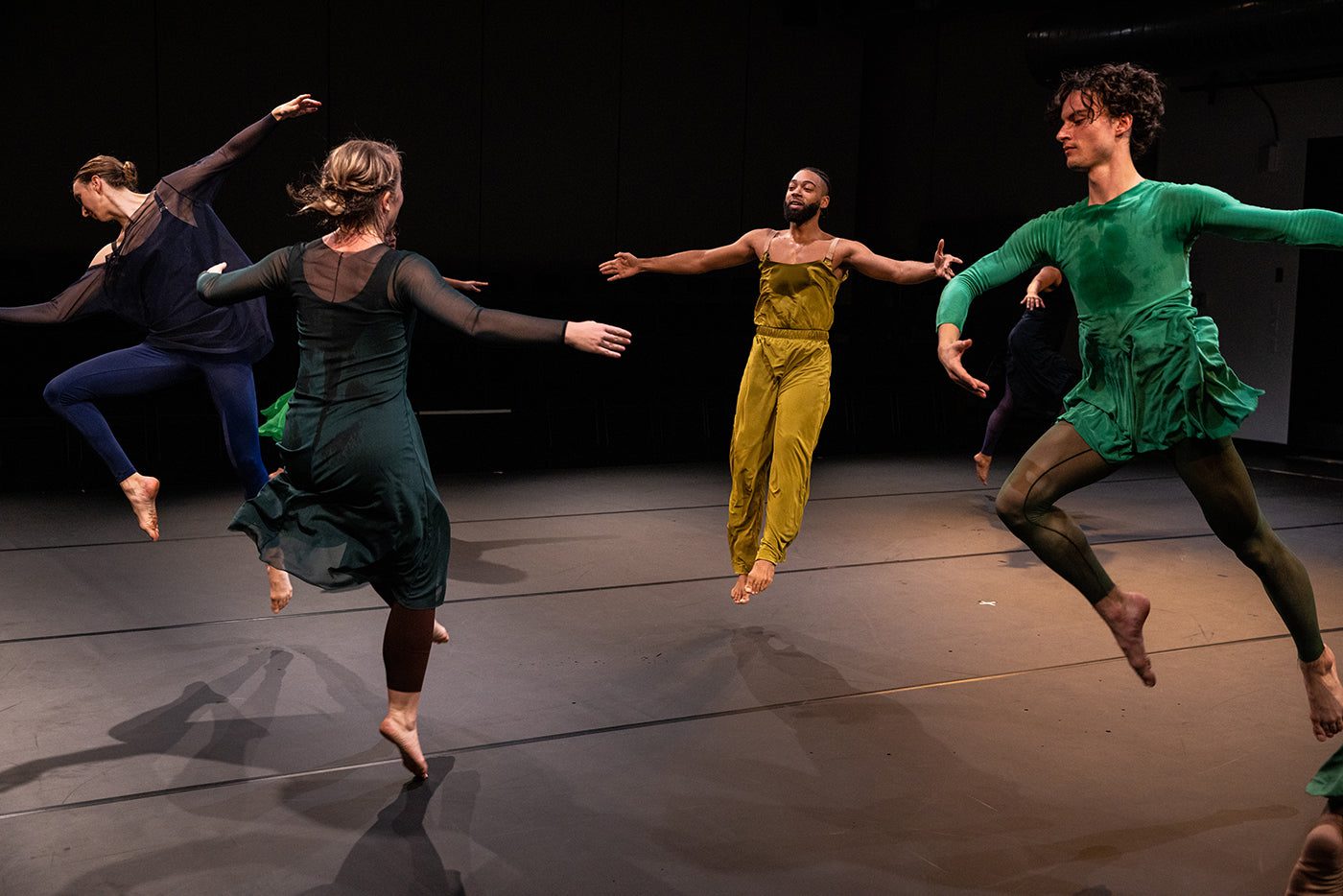 Given the title, “Rivulets,” I’m thinking about water even before the stage lights go up. So I’m primed to view the opening tableau as a strand of bedraggled seaweed washed ashore: eight dancers, sprawled in a languid glowing heap of green, blue, and black. After a short period of stillness, the painterly tableau dissolves into distinct individuals who interact. They variously bow, lunge forward, recoil. Their heads jerk forward and yank back repeatedly. Tight turns open out, then reverse, as if tossed this way and that in the current.

O’Connor is known for making dances about dance. That is, he’s more interested in exploring movement than he is in making a point. To each project, he brings a background in ballet and a broad education in techniques developed by his modern and postmodern dance forbears. His work can be challenging for an audience. He helps us a bit with a program note for “Rivulets,” a full-length work premiering at Baryshnikov Center for the Arts: “I am not looking for a theme to emerge; if there were one it would be ‘the coexistence of everything,’” he writes. Likewise, if we relax and simply admire the artistry of the performers, enjoy the musical score, the costumes, the lighting—in other words, if we let the magic emerge without thinking too hard—“Rivulets” is full of delight.

The dancers move with the concentrated control of Cunningham technique. They carry their torsos upright, arms held strong. They lunge forward with their best Humphrey fall and recovery. Meanwhile, their feet are busy in dance class, practicing tendus at the barre, toes flicking and pawing the ground. The action takes place primarily on one plane with precise piqué turns and low jetés to the side. There is little that happens on the floor or above their heads. When a dancer sinks to the floor, it’s notable—several times one collapses as if exhausted, perhaps sick. Often the others help break their fall and ease them down.

Notable are the changes in dynamic, including pleasurable moments of stillness. Sometimes the choreography matches the music, sometimes it continues without it. Said music is an original electronic score by O’Connor, full of shifts and changes: instrumentals—a keyboard, strings—and environmental sounds. It’s a balanced, fully integrated part of the work.

Throughout the evening, we come to know each dancer as an individual. Most are Brooklyn based, make their own work and perform with notable artists in the New York dance community; some have connections with University of Illinois at Urbana-Champaign where O’Connor is a professor. All are impressive. Their body diversity is on display in various solos, duets, and other small groupings, and enhanced by Reid Bartelme’s costumes. Each made in a different color, the flowy gender neutral tunics, dresses, and pants signal that while the ensemble is cohesive, it is not a matched set.

One way O’Connor’s idea of co-existence emerges is in episodes where the ensemble mills about like the crowd in Grand Central’s Main Concourse at rush hour—everyone on a path that crisscrosses with everyone else. It looks random, the way the performers circle and cross—there are near misses to navigate. But if you look closely, you see that each dancer is repeating a specific path over and over. There is order, but when layered onto the paths of the others, it looks like chance.

Against the strong technique at the foundation of “Rivulets,” O’Connor introduces incongruities that surprise. For instance, some of the milling about turns into a kind of court dance with the ensemble splitting into twos and fours with bowing and curtsies that remind me of the minuet. The most memorable incongruity may be the way the performers gesture with their hands: fingers trill under the chin like a Louis XIV ruffly cravat, and up and down the body as if they are speaking; they wave in the air like tendrils of a water creature. It’s a bit silly. Not that “Rivulets” seems overly serious. Rather, there is a dailiness quality to the activity. The way we go about our lives, doing most things over and over again, allows certain moments of difference—or clarity—to stand out.